Action resumed last night, the Germans continued to pour fire into the British lining the opposite hedge row, the platoon sergeant deployed to bolster the worst hit section, no sooner than he arrived the section corporal was wounded. Traffic was not all one way and the German opposite number was also hit again reducing his command ability for the remainder of the game. 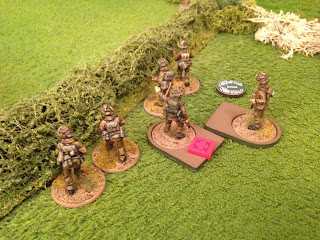 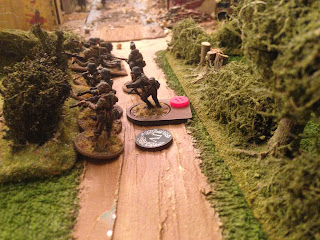 The sergeant moved the section out of line of site while the Cromwell moved up to engage the Germans opposite with the support of the 2" mortar. On the left the German squad and British section continued their private battle for control of that flank. 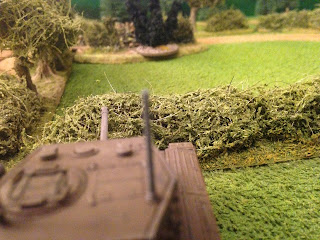 The section to support the Cromwell was not up yet but undeterred it engaged the German squad, the Germans seized the opportunity and the panzerschrek team moved up to try a shot. Luckily for the Cromwell it missed. 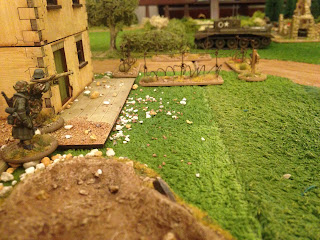 This attracted the attention of the 2" mortar team who dropped two bombs killing one of the team, machine gun fire from the co-axial also applied two shock which meant the team broke. 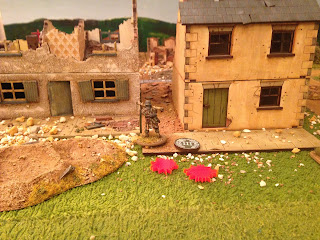 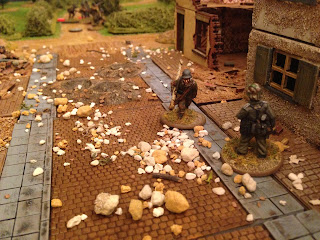 The fleeing German came running into the now deployed Zugfuhrer who rallied him and sent him to support the beleaguered squad at the hedgerow. 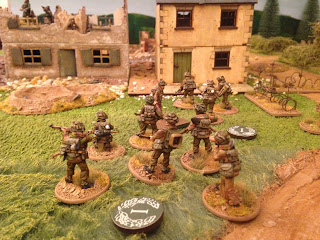 The British number three section which had now come up to support the Cromwell seized the opportunity to stream towards the apparently vacant building to find it was not empty at all, the Germans must have been surprised by this as although in the open the advancing British received some shock but no casualties! 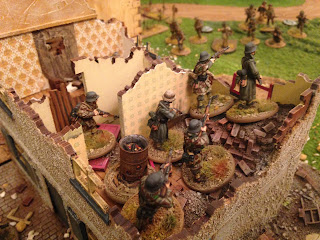 Alas losses in the hedgerows had reduced the German force morale significantly, the rallied panzerschrek man took a shot, hit but it did not penetrate, merely stunning the gunner, the hull machine gunner and 2" mortar saw this further threat off. This reduced the German force morale to zero. Another win for the forces of good, it appears that evil will not prevail when I am in command. 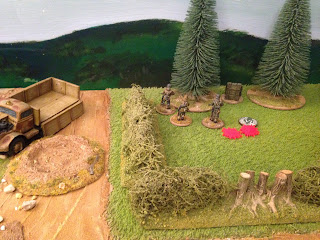 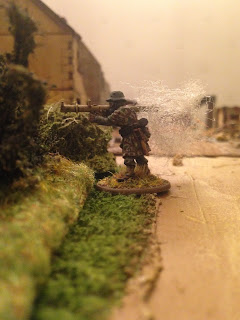 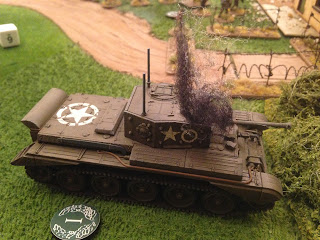 I had not intended to play this game until later in the week, I had set up and duly played a game using Battlegroup Fall of the Reich with similar forces, this however ended in turn three!
Memo to self, when playing a game with low Battle Ratings tell the chit monitor to give me back any 4 and 5's that are drawn and I will draw again.
German Battle Rating - 11
Three chits drawn - 4,4,5!
Hopefully unless we do a Leicester it will be a socially distanced face to face game over at GHQ  next.
Until next time, keep safe and KBO
Posted by Phil Robinson at 06:15