Popped over to GHQ as planned yesterday for the final game of the year, we had not decided on a particular game, we would decide on the day depending on how we felt. We decided to wheel out the forces of Pompous Maximus and Baldinus for a final time in 2014, we would be using Neil Thomas's Ancient And Medieval rules. Both sides would have eight units, Pompous (Dave) would be attacking the forces of Baldinus (Me) positioned at the crossroads through the Thingswill Pass.

We decided that the game would last for twelve turns, with this in mind Pompous ordered an immediate advance, whilst Baldinus just manoeuvred his force to best meet the advancing enemy. The usual missile exchange took place with things fairly even, although I did many casualties I could not do enough to seriously diminish the advancing enemy, luckily I was able to save many casualties. My initial dice rolls were spectacular but would not last, where has Dave's although not as spectacular were more consistent, this would finally tell. At turn ten it was clear that Pompous would win the day, another defeat for the would be pretender.

﻿With a couple of hours to go before I had to pick the better half up from work to join Dave and Sue for dinner, a rather delicious steak and ale casserole made by Sue, we decided to have a Wings of War game. Now these are usually all over within an hour but this one took one and a quarter, was it expert flying, really crap flying or just good luck? Whichever yours truly was to come second again, lets hope I can do better in our first game of 2015 next Monday, a late Great War game using modified Bolt Action rules.

I have posted pics of the truck featured in my previous post over on the dedicated blog True To The East, click the link if you are interested.

All that remains is to wish all my followers, regular and random visitors a very happy and prosperous New Year, and may the dice gods favour you in 2015.

Here is my only gaming related present, a Matchbox Models of Yesteryear truck for my Back of Beyond Soviets from Dave.


Finally some painting for my own First Carlist War project

TTFN
Posted by Phil Robinson at 12:29 2 comments:
Email ThisBlogThis!Share to TwitterShare to FacebookShare to Pinterest
Labels: Back of Beyond, Painting 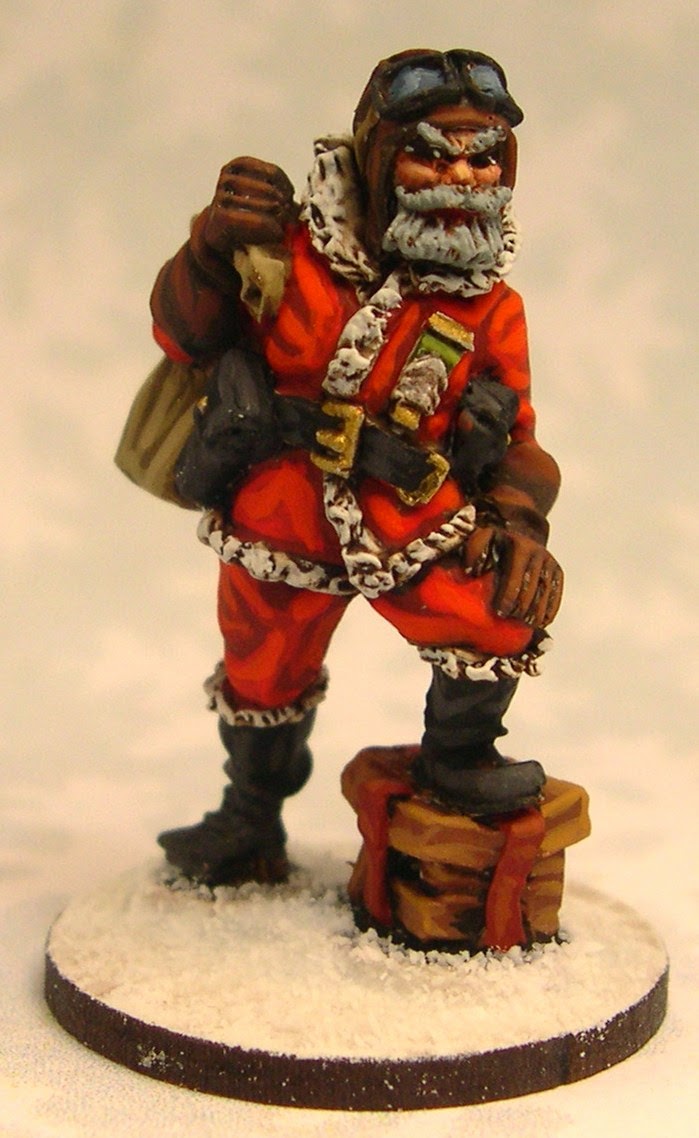 Posted by Phil Robinson at 16:29 6 comments:
Email ThisBlogThis!Share to TwitterShare to FacebookShare to Pinterest
Labels: Miscellaneous

Dave popped over today for our last game at OHQ for 2014, I chose to do a First Carlist War game, inspired by a recent conversation with Saxon Dog I have started another two units for my project and I thought this would keep the momentum going.
We would be using my slightly modified Neil Thomas 19th century rules and a scenario from the same authors "One Hour Wargames" book.
The Carlists had discovered a river crossing, their objective was to seize the crossing and prevent the Isabelino's from sealing it, to do this no Isabelino unit could be within 12" of the bridge at the end of the designated number of turns. 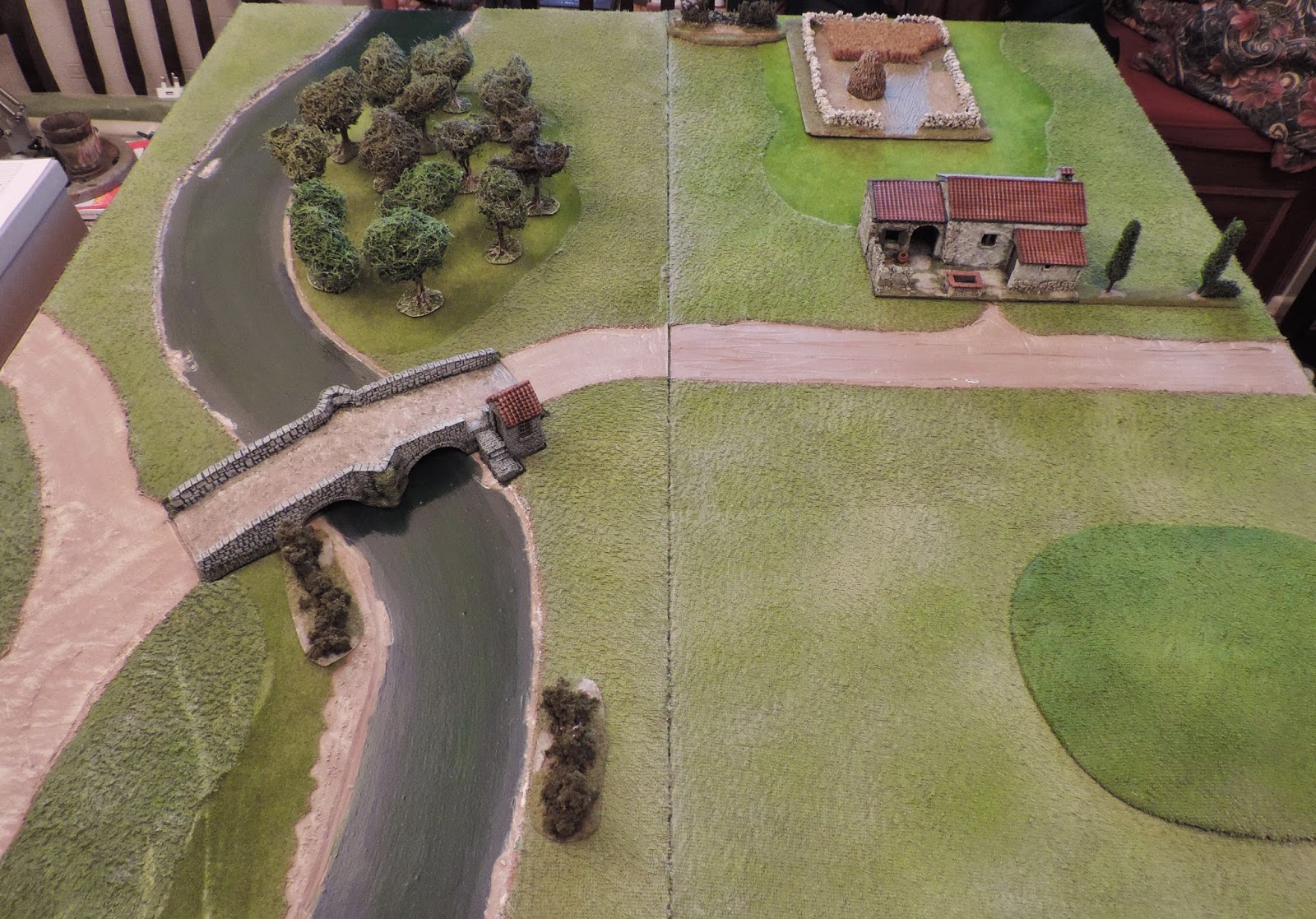 Both sides would have six units determined by the tables provided, the Carlists would start with one unit within 6" of the bridge on the right hand side of the river in the above picture, in subsequent turns they would get get additional units entering from the road at the bottom left of the picture. The Isabelino units would enter in designated turns, dicing to see at which point they would appear, this could be at the road on the right of the picture, the hill at the bottom right or at the line of bushes at the top of the picture. The first Isabelino unit, artillery appeared at the top, just right to enfilade any Carlist unit facing the road to the right, the rest of the Isabelino's entered at the road, the worst possible place for the Carlist cause, as this enabled the Isabelino units to advance quickly and bottle the Carlists in at the bridge. This made them unable to bring mass musket fire to bear has they they had to cross the bridge piecemeal, this left the Carlists on the back foot for the majority of the game. By the time they made headway it was to late to fulfil the objective before the last turn, it was a hard fought and really enjoyable game nonetheless. Below are some pics and captions from the game, a well deserved victory for Don David and the Isabelino cause.

﻿The final game of 2014 at GHQ will, all things being well, take place next Monday. I will post pics of the Carlist War figures I am working on before the year end.

A Little Diversion Into -

Sci-Fi - over on the Lead Adventure Forum the latest 100 painting club subject is on the Future Wars board. I have had this Studio McVey figure assembled, primed and based for a while now, I could not resist getting it I just like way Kev White has conveyed the sense of the unseen menace in the piece. This was just the excuse I needed to get it completed and have a break from painting wargame pieces.

I glued the base that comes with it to a round MDF base covered with plastic card chequer plate and extended the goo, ﻿I am not sure I like the way I painted the goo, I may redo this at some point. No game next week as I am away for a few days, and yes the painting goes with me, no rest for the self-employed. Hopefully we will get a game in the week after before the Christmas festivities, a First Carlist War or Spanish Civil War game is planned. 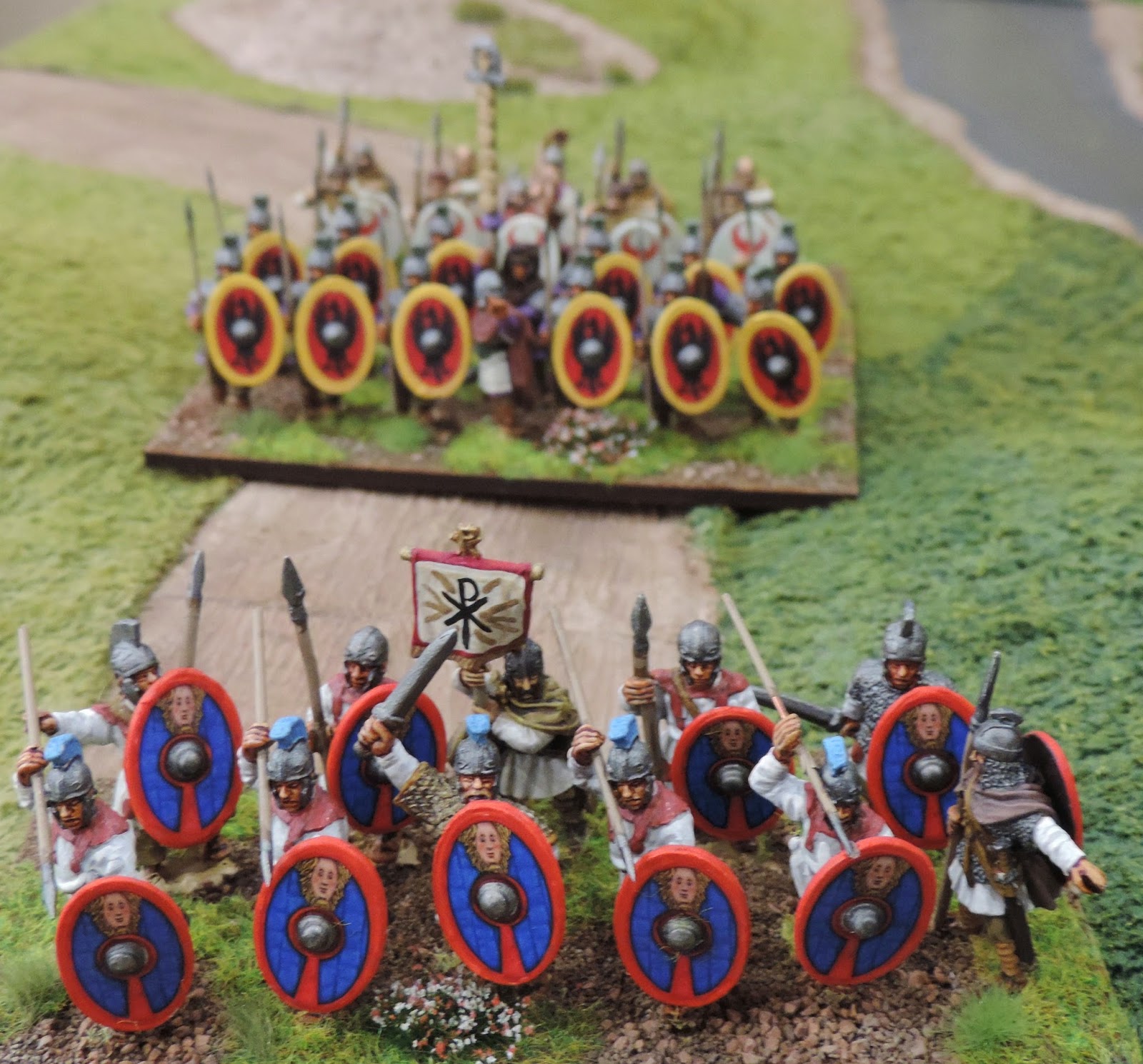 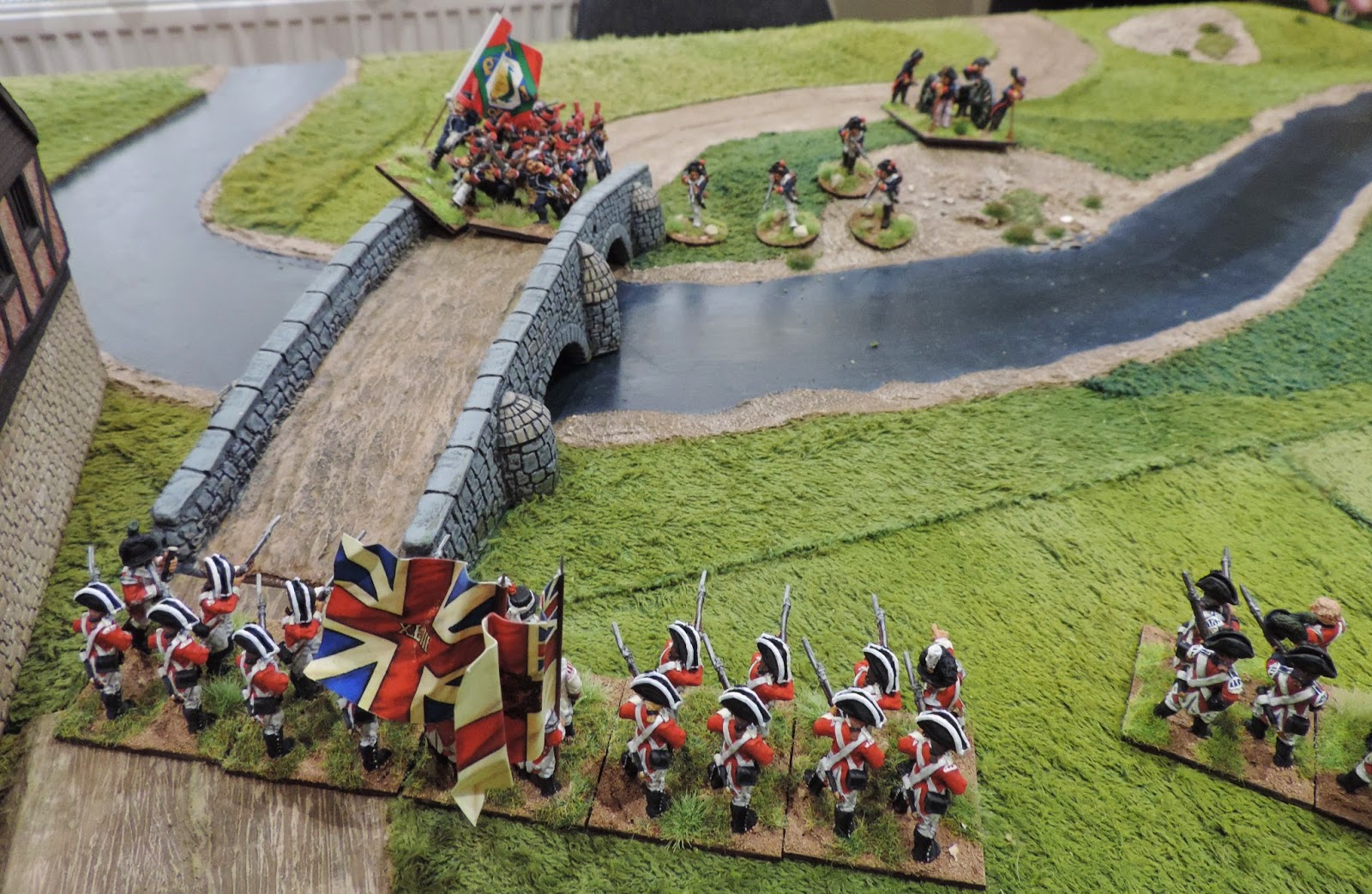 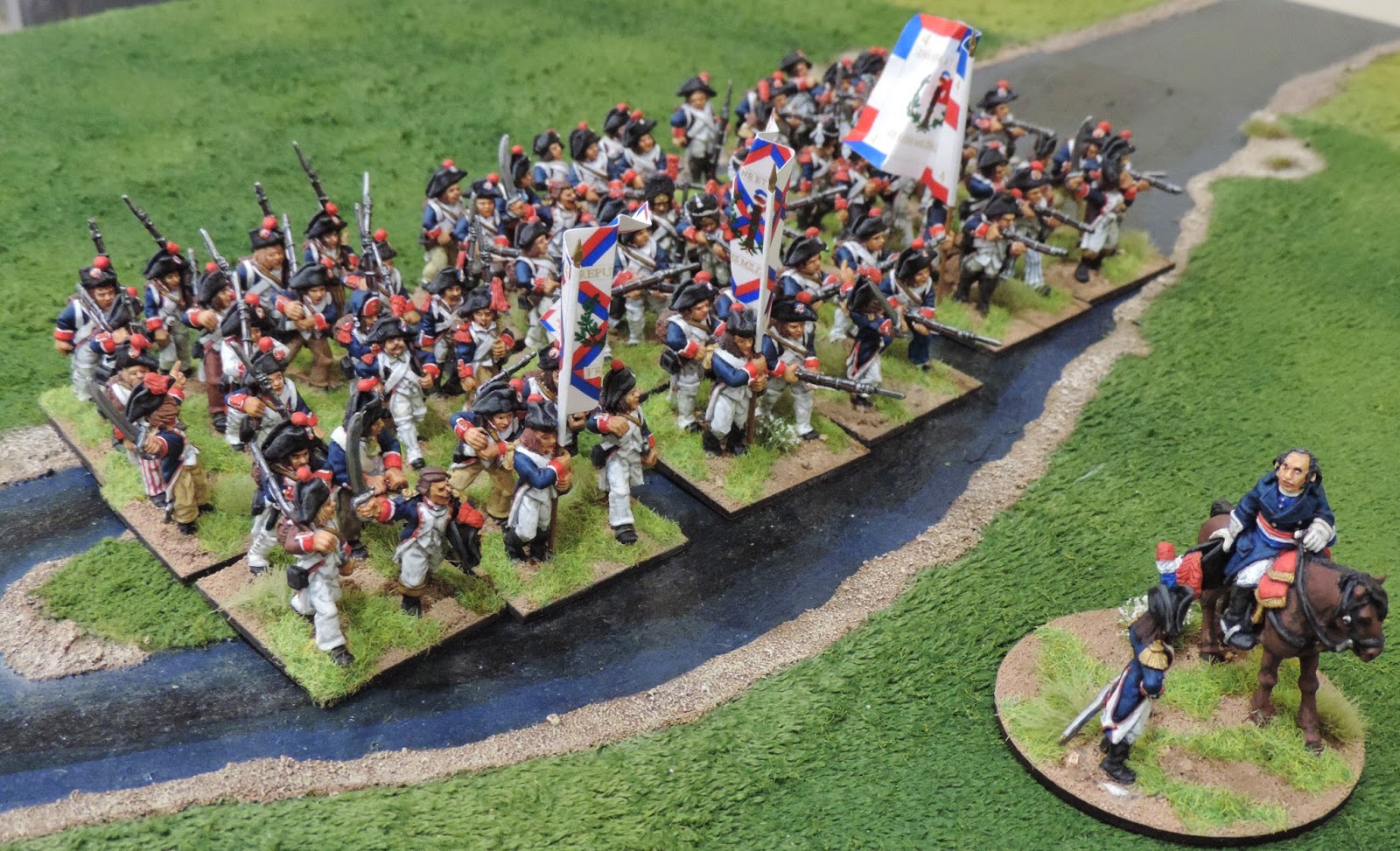 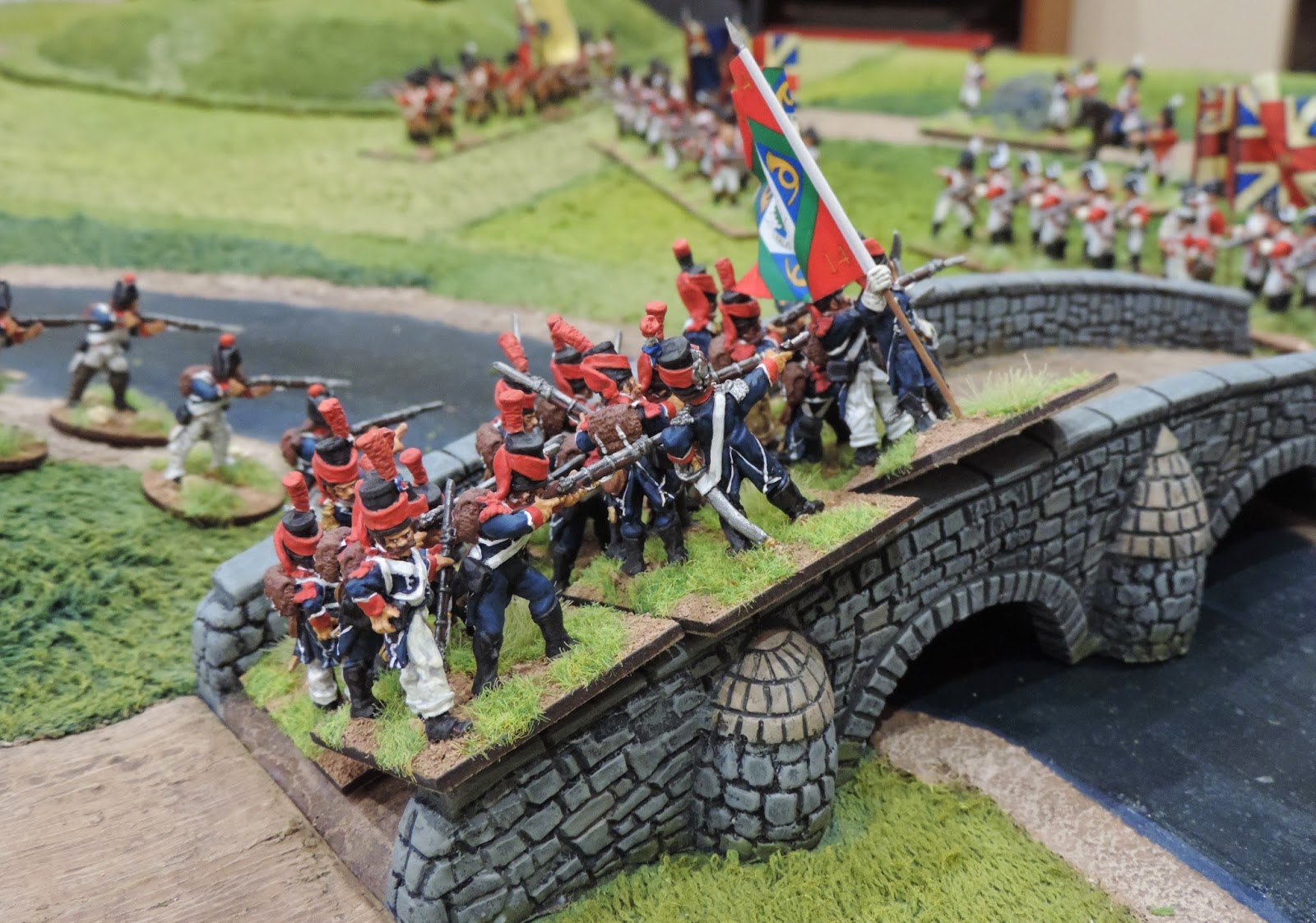 Here are the casualty/shock markers I mentioned in the previous post but forgot to post them. If you are interested in the recent photoshoot for WI also mentioned in the last post pop over to Dave's Blog where can get an insight of what goes on at such things and see amongst other things that I was also chief sky holder upperer.

There you are sitting at your work station/desk/dining/kitchen table (delete as appropriate) gently squeezing that pot of Vallejo, nicht, nowt, zilch, so you squeeze a little harder and gush enough paint to paint the QE2 for these eventualities I try to ensure I have figures on hand to splash paint on, the same goes when you get the amount of paint on your pallet that you think you want and realise you didn't want that much after all. This does have its advantages as I now have another base worth of Goths and Bob Murch's latest Movember figure done, OK I did have to get the odd colour out to complete them but not much, while I was basing these and some commission stuff I finally got a couple of casualty figure bases done as well.
No games last week due to to elderly relative issues, I will however be popping to Bickley Towers with the forces of SPIFF (see my "True To The East" and Dave's "Tales From Rhanzlistan" blog for info on their exploits) for a WI photo shoot to accompany Dave's forthcoming article.