Did not quite get them finished for the game, here they are all four bases, next up will be the Carlist Navarre Guides 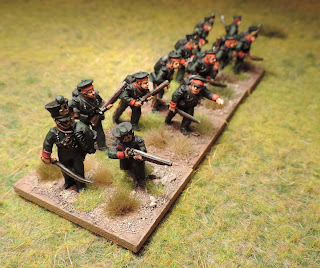 Taking our daughter, who is having a rough time at the moment away for a break for a few days, so there will be a gap before the next post.

Keeping Up The Pressure, Spain 1836

Fresh from his previous victory Don Byklos Carlos is hot on the heels of his great adversary Don Fillipe Hijoderobin, Don Fillipe as left a holding force behind whilst he gathers together the recent recruits to Carlist cause. Positioned behind walls and with the artillery dug in on the adjacent high ground  the Don hopes it will give him time to bring forward further troops to try and achieve some parity in numbers, the new troops except for the training cadre will be untried in combat. False intelligence as led the Christinos to believe that the Carlist left flank is protected by cavalry this he hopes will help protect that flank from any enemy cavalry threat, the right is well protected by olive groves and walls.
This time we would be using Black Powder rules again, the Carlists could dice using the usual command roll the first turn after lunch, so that there was no set turn for possible arrival. Below are some photo's that I hope will best describe the action in captions, hopefully that way Blogger will not lose my text when publishing this time.

A hard fought game, notable for some shocking musketry from the Carlists on the approaching Christinos, I excelled in throwing ones and twos, more than usual! But to counter this they held on a lot longer than they should have done given the mass of accurate Christino fire poured into them, and what about those rockets more direct hits than in all its outings so far!
Don Filippe will retire to winter quarters and come out fighting in the New Year, down but certainly not out.
All being well the last game of 2015 at OHQ will be on Monday 21st December, where as 2015 gone?

Email ThisBlogThis!Share to TwitterShare to FacebookShare to Pinterest
Labels: Back of Beyond, Painting, Pulp

With Dave due later in the morning I set up the table below and quickly devised a scenario, the Germans would be attacking the British positions in a dawn attack taking advantage of the thick morning mist, a preliminary bombardment meant that the British were expecting at least a large raid so had sent for reinforcements, these were diced for and would not start to arrive until turn three, when even then would need to be diced for to see what arrived and where. The initial defenders were two Lewis gun sections a Vickers machine gun and deployed in the village a toffee apple mortar, which I had recently finished painting, and a sniper. 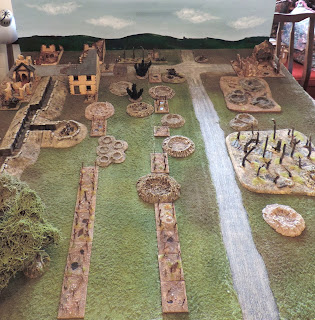 The Germans would start with three stormtroop sections entering the table on the first turn, they were also able to place a sniper anywhere on table their side of the road. From turn two they could dice for arrival of the following each turn, a Maxim HMG, a granatenwerfer, three infantry sections and an A7V tank.


Don't know what has happened to the text that should be here, I am not typing it all again, the Germans won the Brits lost, and Blogger is a load of shite.

STOP PRESS
Dave has come to the rescue, more pics and words  here

Hot on the heels of last week's WI photo shoot I had planned a Great War Chain of Command game tomorrow, however Dave and myself have had a busy week and weekend so I for one have not been able to mug up on the rules. Therefore tomorrow it will just be a case of throwing down some toys and having a bash with good old Bolt Action again, stand by for a report and pics later in the week.

Part of my week involved finishing off a couple of commissions, some late 17th C British cavalry and some FIW French (pic of these below)

Officers by Front Rank others by Redoubt, recipient will add flags and base them.

A Bit Of A Lull

Not much to blog the last couple of weeks I have been away most of the time, taking my wife on a two well earned breaks for a little R&R after a spell in hospital recently. First off we went up to Northumberland, revisiting Lindisfarne and taking in some castles we had seen but never visited before, the weather was really kind to us, last week we went down to South Wales staying in Caerphilly and visiting yet more castles and the Doctor Who exhibition in Cardiff. I did take some painting away on our first trip but it was mostly commission stuff except for a dead Goth to mark casualties for my 3rd century Roman project.
Today however I popped over to Dave's for a couple of games, a report with pics is over on Dave's Blog do pop over and take a look.. No game next week here as I have to pop over to Dave's for a WI photo shoot.