Latest stuff recently completed for a couple of my collections

First up a carroballista for the third century Romans, ballista and crew are A and A Miniatures, the officer is a Foundry figure from the Caesarean Roman range, a few centuries out but I think he will do. The stakes are from First Corps and the basket is from the Warlord ballista set, I cut off the weedy looking bolt on the loader figure and added one that looked like it might come sharp from a wire spear with plastic card fletches, base as ever from Warbases 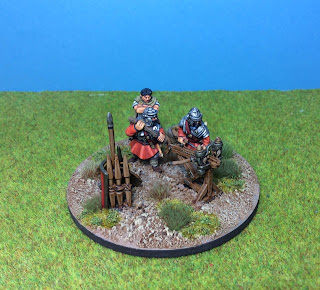 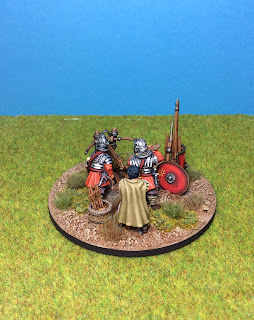 Next up are two Panthers, both are from The Plastic Soldier Company, I replaced the plastic barrels with metal RB ones, the crew are Foundry figures. The decals are from my bits box from some of the various kits I have built over the last few years, base from Warbases of course. 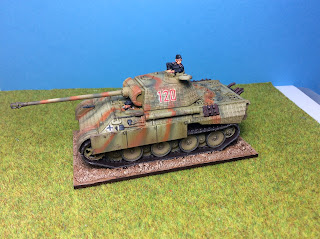 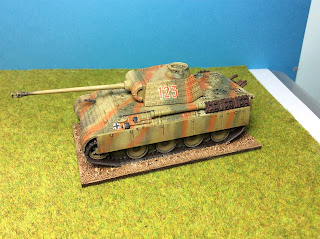 First off a note on using the activation system from To the Strongest, each commander would roll a D6 the result would be the number of activation chits he could use to activate the units in his command. For example, Horsa rolls a 6, he has three war bands under his command he could try and activate one war band six times or the three war band two times each, you get the picture.
Also in addition to other things he could do if attached to a unit, see AMW additions opposite, he could draw another activation chit if one failed to get the requisite score, this would also count towards his available activations. Also if a unit is more than twelve inches away from its commander the activation number required is one higher than required.

Turn One
A slow start for the Saxons - Activations from right to left 6,1 and 1, but the British levy unit on the left takes three casualties from the Saxon archers whilst the warbands advance slowly.
The lone British commander gets 2 activations, getting the archers to fire. 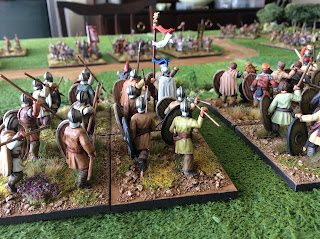 Turn Two
Saxon activations 2, 1 and 5. The British levy unit on the left take more casualties from archery losing a base. Penda Fudd holds his bodyguard in position to await the advance of the warbands on his right, meanwhile the headstrong Hengist on his left leads his warband in a charge against the British archers who against all odds hold them back but at a cost of two bases.

Turn Three
Things are going well for the Saxons, however their warbands are quite strung out and Arthur and reinforcements could arrive anytime. 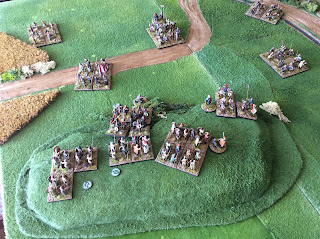 Turn Four
The Saxons progress is blunted by poor rolls for activation, 2,1 and 1, they really did need the gods to look down kindly this turn.
Time for the Britons to reply and reply they do, Arthur arrives. This puts new life in the troops on the hill bravely holding off the attack by Penda Fudd and his seasoned bodyguard. Obviously tired by the march Arthurs force does little, a low activations roll. 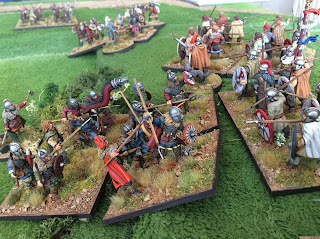 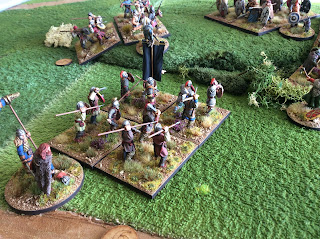 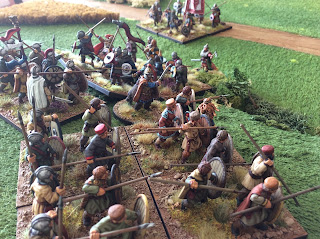 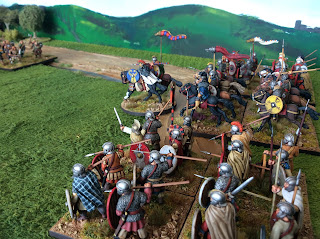 Turn Five
Hengist gets a good activation, despite a tempting flank on the right he as to mind the approaching Britons from Arthurs force on his left so elects to face them, obviously tired from the fighting since turn two his men refuse the charge them.
Meanwhile the fight between Penda and his bodyguard and the Britons with Baldinus fighting among them continues, on the right Horsa's archers fire and wipe out the remaining levy unit while his warband continues its fight against the Roman remnant unit also seeing them off too.
Things are looking bleak for the Britons on the hill, Arthurs men are really tired and still advance slowly this turn, no doubt catching their breath for things to come. However Arthurs knights are in better shape their mounts are suitably recovered and he charges headlong into the flank of Penda and his bodyguard, but they are made of stern stuff and weather the assault (Arthurs men score 4 hits out of a whopping 12 dice, Arthur uses his re-roll with the 8 misses and they all fail to score a hit too! the horses maybe recovered from the march but not the men it seems) 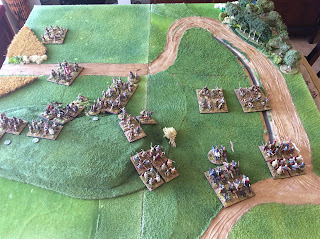 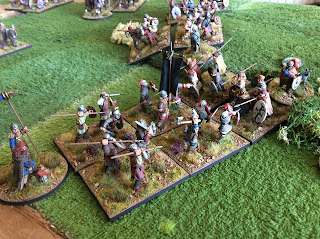 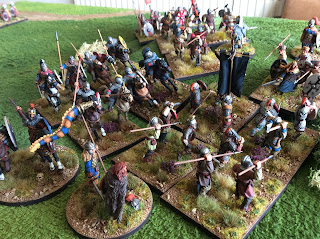 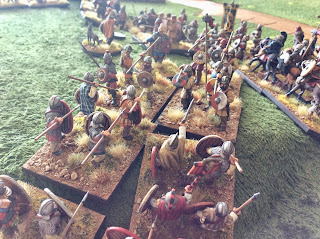 Turn Six
Penda Fudd is slain, the resulting morale checks sees two warbands fleeing the field, in terms of units though things are pretty even at the end of the turn. In AMW the battle is lost when one side is reduced to 25% with the sides fairly equal in numbers I could have continued but deemed that the loss of Penda would see the Saxons withdraw from the field.

An enjoyable few hours, I thought that the activation additions helped when playing solo it gave a lot more uncertainty to proceedings, next time I will try using To the Strongest in its entirety and see how it goes.

Until next time keep safe and KBO
Posted by Phil Robinson at 06:29 18 comments:

All set up for a solo game tomorrow, the scenario is from Neil Thomas's Ancient and Medieval rules based on the battle of Mount Badon and whose rules I will be using. The Romano - Britons on the hill must hold out until Artorious arrives with his cavalry and reinforcements, this will be on a predetermined move after turn three, I will not know which move, my wife will draw a chit beforehand and I will find out afterwards. To further add a little randomness I will use the activation system from To the Strongest.

There appears to be an issue with Blogger at the moment with photos not been shown so I may be wasting my time, but here goes 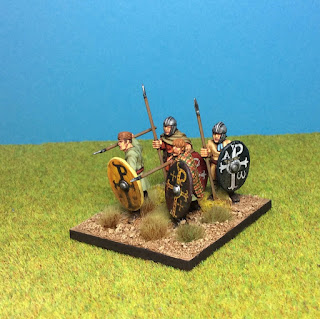 Footsore Miniatures, I continue to add figures to my Roman-Britons and Early Saxons to make four base units. Another base of these to do then all the units will be upgraded, I then have a unit of Saxon warriors and a unit of Briton cavalry to make both sides eight units strong. 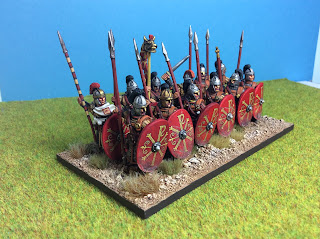 Battlegroup rules for the third game, in Battlegroup each force has a Battle Rating when this is exceeded you have lost, the game can also be won by controlling all of the objectives or if all of your units are pinned.
When you lose a unit you take a chit, this could have a number or a special event there are also other occasions for drawing a chit.
You can play the game at different levels, squad, platoon etc.
For this scenario in keeping with the other games I chose a squad level game. The Germans had a Battle Rating of 14 and the British 15, again to keep it similar to the other games there was only one objective, the British had to exit the German table edge with an infantry unit when the game would end, unless of course either side had exceeded their BR beforehand, the Germans would then take a chit and the BR remaining for each side compared.

The British exited the German table edge on turn 10, when the Germans drew their chit both sides had 6BR remaining a honourable draw was agreed.

I have enjoyed all three games and each has their own approach, if I had choose only one to play it would be Battlegroup, I like being the Battlegroup commander rather than the platoon commander you are in Bolt Action and Chain of Command, out of those I prefer Chain of Command although it really comes in to its own when used in a campaign setting. Bolt Action is easier to play in a pick up game I find, Battlegroup gives me a happy medium for my WWII gaming fix. This was the first time I had played it at squad level and happy to see it works just as well as the Platoon level games we usually play.

My wife kindly "volunteered" to be chit monitor so I was not aware of how each side was doing as is the case when playing a physical opponent, you are allowed to know how many chits but not their value.

This time around for the scenario the rules will be Chain of Command, the scenario objective will remain the same however the British can win by exiting one unit anywhere along the German base line. I did consider doing some cards similar to the ones used in the Bolt Action run through but decided against it, I felt that the activation dice should suffice in getting the random effect without further complication. Also I think I did mention changing the options on the card last time when the action card drawn options did not seem sensible in the given circumstance.
This time I decided that the British would be more bold, this was helped by them getting four free moves with the patrol markers, but of course no plan survives contact with the dice. 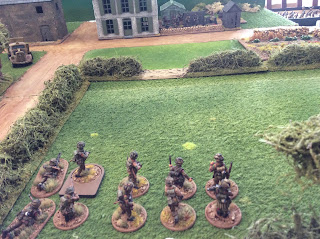 The British make a bold dash for the opposite hedgerow before the Germans can deploy, but it appeared that the open ground was not so open after all a poor dice roll left them high and dry in the middle. 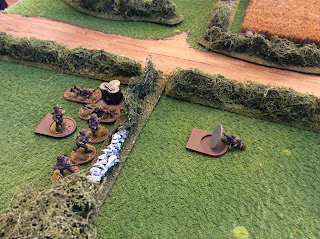 The Germans in their phase quickly deployed in the yard of the house the Gerfreiter directing the fire of the MG42 through the gap right into the advancing British, result two dead and the Corporal ko'd, with no NCO the section took more fire the Corporal being wounded also from this. The British had to deploy their Sergeant to get the section back over the hedge, the photo is for effect, they did take the wounded and unconscious Corporal with them. 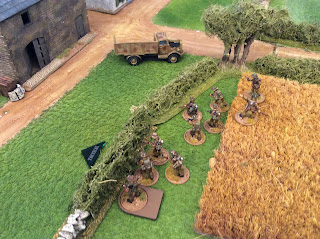 Over on the other flank the British did not mess about this time and sent a section through the cornfield making good use of its cover to weather the fire of the tripod mounted MG42 the Germans deployed behind the stone wall opposite the barn. 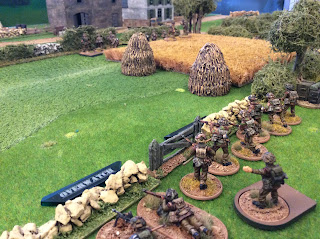 No.3 section deploy just behind on their flank, covering them where they awaited the deployment of the platoon 2" mortar who would put down smoke to cover their advance across the open space in front. 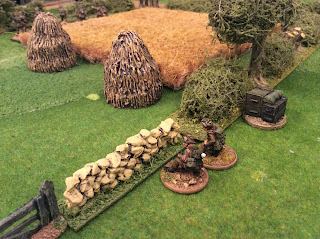 The mortar is deployed, over to the right the Cromwell moves up in support of number one section who are still trading shots with the Germans opposite the house, the Sergeant keeping the section rallied until the Corporal came round. 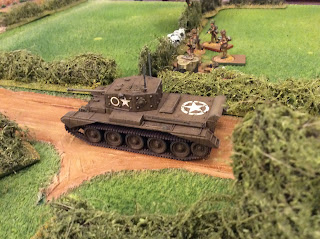 Meanwhile the Germans had deployed a squad to support the MG42 next to the barn, that smoke would really be required now, luckily the team were tip top every round being on target. This enabled number three section to reach the opposite hedge untouched and denying the Germans the jump off point there. 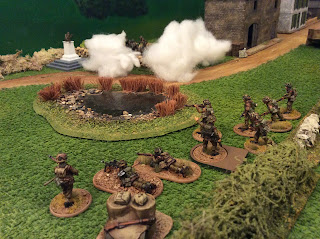 Number three section had the try line in sight one more push and the day could be won. 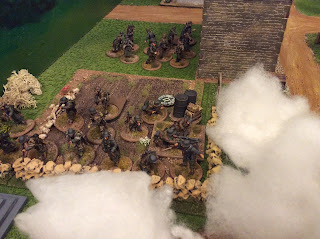 The following phase saw them just short of the table edge, the Germans made a last gasp close assault but were driven back in fine style. 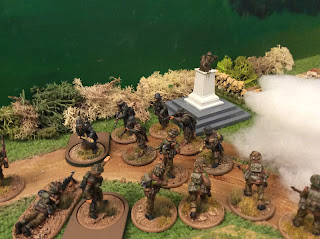 So a win for the British this time, the use of nearly text book fire and movement with the aid of the 2" mortar that could do no wrong sealing the Germans fate.

I thought the game played well without the use of cards to determine what the Germans could do I found that the activation dice covered that well and that I could use them in an unbiased way, although from the above it appeared an easy victory it wasn't and but for the accurate mortar fire it could have been a different story indeed.
Next time I shall be using Battlegroup rules, not a direct comparison because as the name of the rules implies you are the battlegroup not the platoon commander, we will see how it goes.

Until then keep your distance, keep safe and KBO. 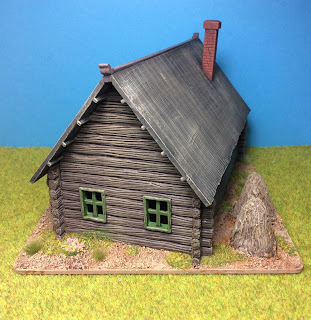 Pegasus Models Russian Izbas with Ironclad Miniatures fences, cereal stacks are from Coriatani, the figure on the monument is an old Foundry WWI French figure, the white stone stand is from the Ainsty grave yard set while the steps are MDF bases.