I have often thought when I have set up the table for our games set in Spain that there was something missing, I recently visited Pat Smith's Blog, and there was the answer, gardens/cultivation around the buildings.
Here is the first one, more to follow when time permits. No game this week, due to the Bank Holiday and Dave and myself both having family commitments to attend to later in the week. 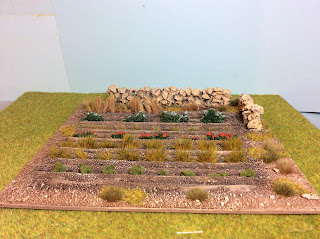 A Not So Black Day

As mentioned in my previous post Dave came over for a Great War game using Bolt Action rules. The Germans are in retreat a small rear guard is left behind to delay the Allied advance, they must hold Tommy at bay for six turns, maybe seven, in game terms this will be a draw, if however they manage to drive the advance back it will be a victory.
To off set some of the casualties the British could expect I decided to use the spotting rule from Battlegroup rules, this would allow for early morning mist and the British making use of the many shell craters as cover.


A finely balanced game, tipped in the Germans favour by the wire being uncut in the worse place for the British, one of wargames hilarious moments as the sections either side were destroyed, meaning that the British had to negotiate through boggy ground to achieve their aims with little time remaining for such a delay, c'est la guerre.

I have found Mark Pipers Rapid Fire 1918 amendments online so will be giving them a try next outing.

Additions to my 3rd century Romans, the cats are from Aventine Miniatures while the lanciarii are A and A Castings, the two figures in helmets have Aventine head swaps, the javelin holders are made with plastic coffee stirrers and Milliput, with LBMS shield transfers, bases as ever are by Warbases. 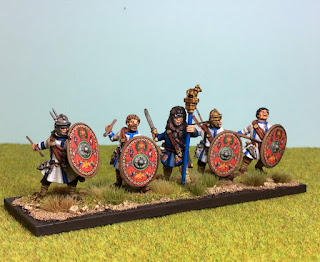 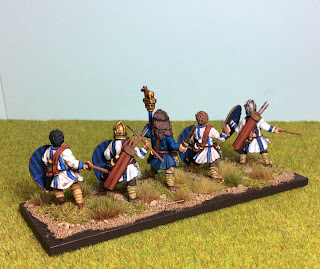 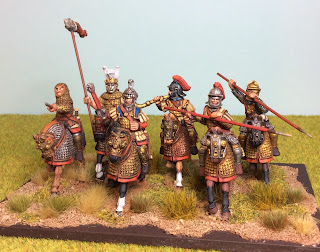 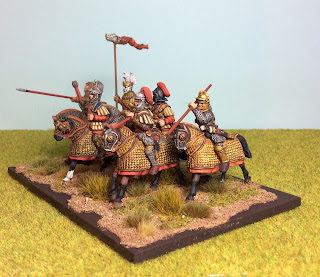 Dave came over to OHQ today, we played a Great War game using Bolt Action rules, more on this anon.

I have finished off another base of figures for our Italian extravaganza, a unit of halberdiers, all Perry metals and a Perry flag from the plastics box, bespoke base from Warbases. Primed ready for painting next are another base of mounted condottiere, but first I must finish off the Roman cataphracts and lanciarii that have been staring at me accusingly for quite a while now. 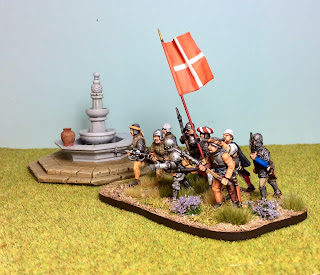 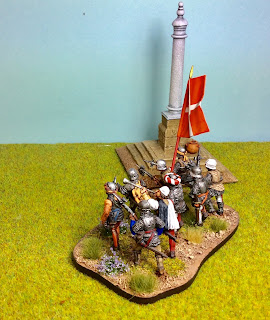 This brings my total of painted figures for the year to 112 added to the terrain pieces I have done I am quite pleased with my progress so far.