More terrain items added to my Spanish collection, all from the ever excellent Grand Manner. The windmill is awaiting material for the sails before I finish it. 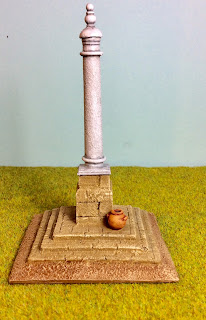 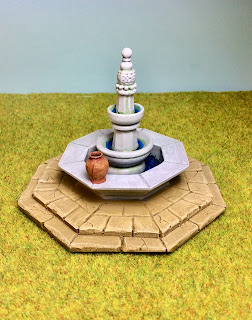 For this weeks game we return to Espana for a Civil War encounter using Rapid Fire rules, however it will be 1:1 scale rather than 15:1, though I am sure the majority of people consider it as 1:1 anyway when they are playing.
However we will not consider LMG’s as integral, so squads with a LMG will add 5 fire points at short range and 3 fire points at medium/long range, if any figure has a SMG it will add 2 fire points at short range only, the figure holding the weapon will not count for fire points as well though.
We will also allow HMG's and squads with LMG's and small arms which total 6 or more fire points fire at armoured vehicles counting as Gun Class 6, although they cannot damage the vehicle a result of light damage or heavy damage will cause the vehicle to take a morale test.
Both the Legion of the Bando Nacional and the Internationals of the EPR will test morale as elite and fire as regulars. 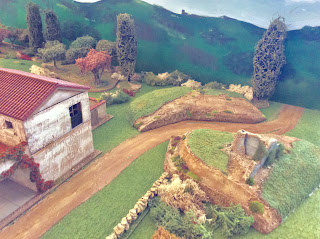 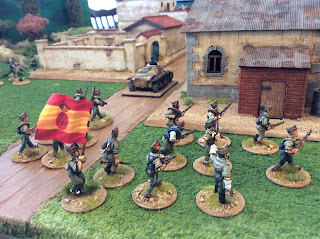 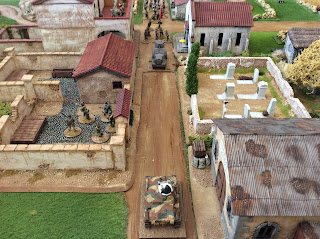 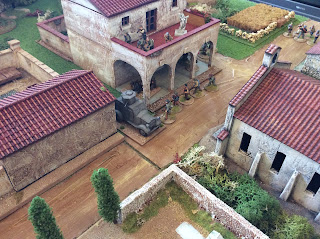 The engagement began with a game of cat and mouse, both sides being cagey with their movement, I managed to manoeuvre myself into a corner on the left whilst I attempted a flanking advance on the right, my troops totally misjudged the density of the cover they used, only moving six inches in five moves, eek! In the centre the Bilbao and the PzI traded shots, I could not bring any extra fire to bear due to my poor positioning earlier whilst the Republican forces did, the combined fire finally made my PzI retire, while on my left the Republicans mopped up my isolated squads.
With casualties mounting and the flanking force grinding to a halt the CO ordered a withdraw leaving yet another village in Republican hands.

We both enjoyed the game immensely, with some hilarious moments, mostly at a cost to the Nationalists I might add.
We thought Rapid Fire worked well, even with the generous amount of cover if we had been using Bolt Action I think it would have been a blood bath, especially with the small size of Spanish squads.

The second game this week was played out last night, Jon commanded the Christino forces while I took the Carlist forces. The Carlists had occupied the town of Rawnsla with two freshly raised battalions of volunteers their stamina would be unknown until they saw action so they were supported by a battalion of veteran Navarre guides and a squadron of the Ontario hussars. A further Brigade was on its away, but it was to be intercepted by two brigades of the Christino army, one Spanish Brigade and a brigade of the British Legion. Both forces deployed outside the town, the Christino forces advanced while the Carlist deployed to receive them, Jon ordered a British Legion to “follow me” and charge a battalion outside town. Result a blunder and they duly charged the volunteers in town, despite only turning out to have a stamina value of one the volunteers held and next turn sent the attackers off in rout, meanwhile the British Legion lancers charged the other volunteers advancing in support, their stamina turned out to be a 4! They duly formed square/oblong😀 and beat off the attack, Jon followed up on the left flank with another blunder and the line cavalry disappeared off the table, things were looking good for the Carlist cause, but then the British Marine rocket battery actually hit something and sent a Carlist battalion off in rout. Not to be deterred Jon ordered another charge by the British Legion, this ended with them being routed, a Carlist victory you may feel, so did I, but it was not be, the pressure on the one Carlist battalion was too much and they also routed, soon followed by another, the Navarre guides were sent to bolster the left flank but it was too late, another battalion was forced to retire shaken which saw them leave the table, the brigade was broken. A Christino battalion, emboldened by beating of the Carlist Navarre lancers earlier in the game supported by the now returned cavalry advanced towards them compelling them to retire this also saw them retire from the table. The Navarre guides were now on their own, with the volunteers being held in the town by the threat of the British lancers they would be unable to lend support so the field was conceded. A most enjoyable game of Black Powder, although things can look to be going your way it is surprising how one thing can turn the tide the other way. Some photo shots of the action in no particular order follow, next week I shall be away, we are off to Dorset, somehow I have managed to miss the Tank Fest and Battlegroup South at Bovington, being away in between both, I will also be away for Barrage on Sunday, very poor planning on my part there. 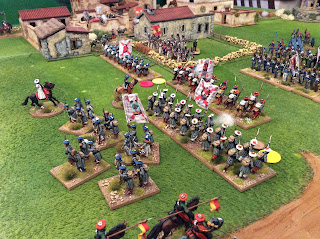 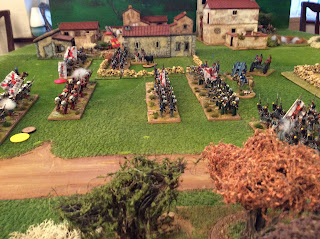 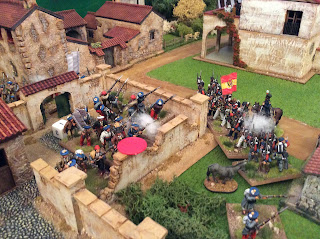 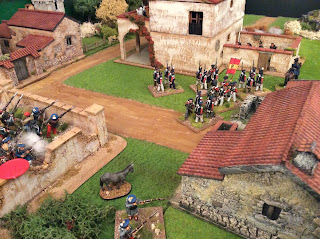 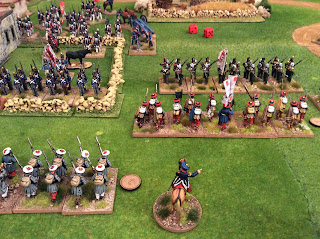 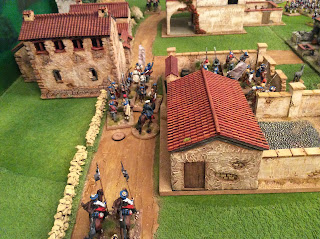 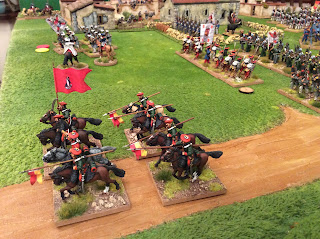 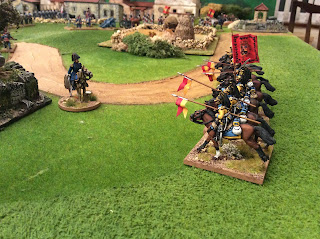 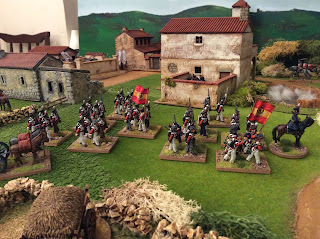 You wait for nearly a month for a game at OHQ then two come together. Today Dave made his first solo trip to OHQ since his hip op for a Spanish Civil War game and Jon is scheduled to come on Wednesday for a First Carlist War game.
For today's game I used Bolt Action rules, a straight up encounter between La Legion and Carlist Requettes and Anarchist militia supported by the International Brigade with the winner being the side which eliminated more enemy units.
I added an additional dice to the order dice in the bag this would generate a random event from the card deck, six cards one for each turn chosen randomly from my deck of eighteen cards by Dave before the game. Both sides would nominate which of their platoons would attempt to enter the table first, these would be required to pass an order test to enter. Once all these had been allocated dice the other platoon could attempt to enter with a minus one to their roll, any sections not on table in turn one would have to be given orders to enter in turn two before any on table sections could be given any. Units who failed to enter on turn two would be considered lost.
Dave as usual took command of the government forces while I took command of the rebels.

Turn one saw both sides with units still to enter the table, with the advantage to the rebels, the random card draw gave one of the rebel sections an extra move, this got a section of Legion to the stable yard wall. The Casa Blanca proved more of an hindrance to the rebels as it only had one window facing the government troops line of approach, I should really have just occupied the yard at the back and concentrated the remaining sections around the stable block, especially as that was where the main government thrust came from. 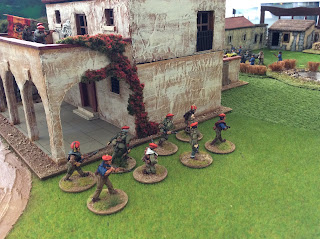 Turn two saw all units from both sides on table, with the run of the order dice enabling the rebels to concentrate their sections around the stables and position their 50mm mortar teams, meanwhile a section of anarchists stormed up the road drawing rebel fire away from the approach of the Internationals on their right. The card draw saw the removal of a government order dice for that turn, slowing their advance only slightly.
On to turn three, the Legion although being stubborn veterans still suffer from their small squad size, the section manning the wall against the advancing Internationals being depleted and pinned by them were assaulted by a anarchist section and wiped out. The Siesta Manana card being drawn ended the turn abruptly leaving my Carlists doing nothing this turn.
Things only got worse for the rebels in the next turn, the Republican Air Attack card was drawn, the legion section in the stable yard was targeted, taking two pins and three casualties, in turn they were assaulted by the victorious anarchist squad from the last turn and they too were wiped out to the man. This was to prove curtains for a depleted Legion section also sheltering there next turn, from there the rebels could not hope to redress the balance. Another convincing win for the government forces.


Hopefully we will be back in Spain a hundred years earlier on Wednesday.