I have started the next legionary unit for my third century Romans, II Adiutrix this legion was  stationed at Aquincum which is modern day Budapest from 106AD until the 5th century, ideal to take on my Gothic/Germanic hordes. The legions emblems were the boar, for which I have a standard and the Pegasus that features on the LBMS shield transfers I have added.

Note the mix of equipment one of the attractions of this period in the history of the Roman Empire.

Again figures are from A and A Miniatures, another ten/twelve to go for another base, this will make six of the eight required.

A further if some what tardy addition to my third century Roman project, although technically I am ahead of the game as I got the figures as a retirement project. With the government changing the retiring age, I am told that my new retirement age will not change, who believes anything they say? I thought I may as well start now while I'm able. The figures are by A and A Miniatures, the shields are Foundry with LBMS transfers, now the unit and shield design are highly speculative as they are from the Notitia Dignitatum, but the alternative was to make one up, besides I like the name and shield design. 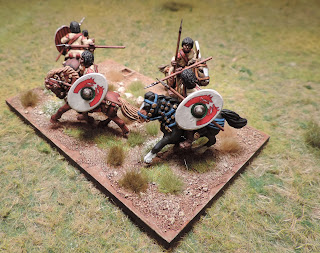 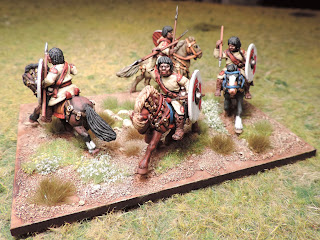 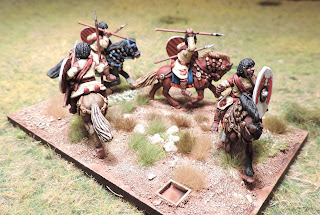 Based for use with Impetus, To The Strongest and Neil Thomas AMW rules, dice holder is used to denote how many bases are left as Neil's rules use units of four bases.

I am continuing to re-base all my 20mm WWII collection on MDF bases and I am also sprucing items up along the way. I have never been happy with the paint job on my Fujimi Hetzer so I decided to give it another one and make it look a tad battle worn at the same time.

Dave requested a Spanish Civil war set to on his next visit to OHQ, happy to oblige I set up the table below 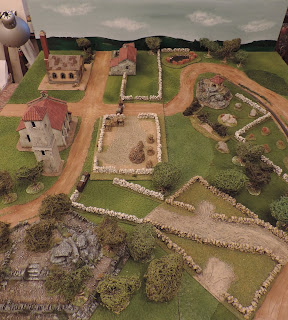 We would be using Bolt Action rules straight from the tin except for the addition of a random card draw when the red dice included in the order dice bag is drawn. The game would run for six turns at which point a D3 would thrown for the additional turns, either 2,3 or 4.
The village would initially be held by a squad of Falange militia, who would receive the support of a contingent of La Legion and possibly a squad of fervent Carlist militia.
Sent to oppose them would be a squad of anarchist militia supported by an armoured truck whose movement would be restricted to the road, a dice would be thrown to see which turn their support, in the form of three squads of International Brigade with an anti-tank gun could dice to appear, they would appear after passing an order test, when they had successfully tested to enter the table the Nationalists could then dice for their support to arrive.
Both sides support duly arrived on turn three, the game was on! The Legion had to dice to see what appeared, this being a squad of infantry, a light mortar, a Panzer I and a command group, they failed to get anything else so a squad of Carlist militia would appear in the following turn.
The Republicans piled on the pressure, but neither side looked to be able to break the deadlock, then a card draw brought on a Nationalist air strike, this would surely turn the tide?
Well yes it did but not for the Nationalists, the rookie pilot proceeded to straff the now panicking Legion, yes panicking Legion, they threw a Fubar! Judgement on me for not getting around to assembling and painting a Nationalist plane.
This thoroughly demoralised the Nationalist force, although at turn six they were still holding on, the dice throw gave an additional two turns, not enough turns for the Republicans to clear the village but the Nationalists were really done as a viable fighting force, so victory went to the Republic, No Passaran!
Some pics of the action follow 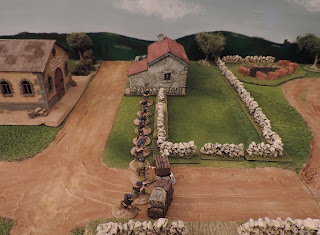 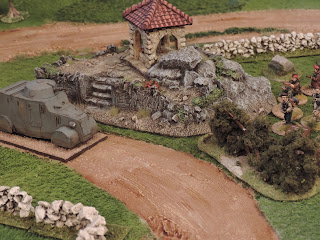 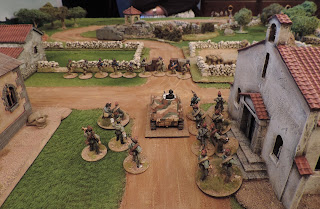 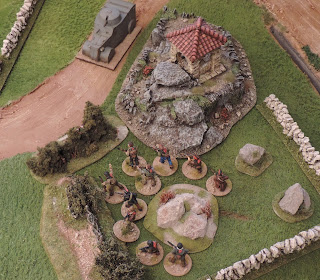 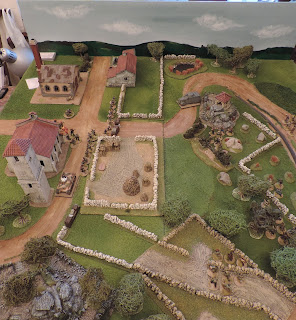 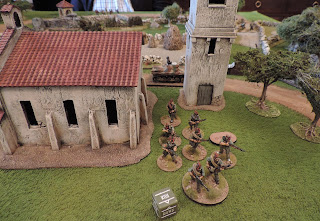 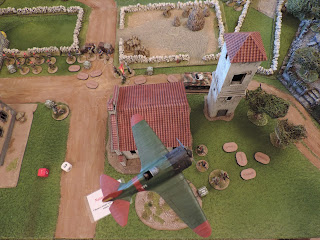 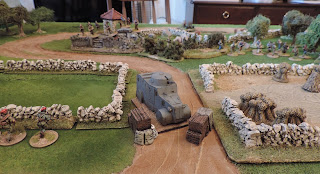 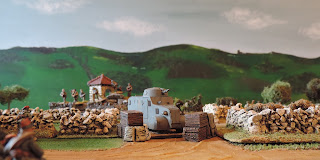 If we can get a place my wife and I hope to be doing a tour later in the month, visiting Cordoba, Grenada and Seville, our first visit to mainland Spain since 1977.