After last week's return to the Spanish Civil War using Bolt Action Second Edition, this week it was the turn of the Great War.
Following on from the success at Petitte Rawnslie, Allied command wanted to push on, however on the outskirts of the village was Church Hill with a concrete observation bunker, which had a commanding view of any troop movement from the village.
This had to be neutralised before any advance could be contemplated, the task fell to Major "We Can't Win This" Bicclesworth's, Pendeforde Pals battalion. Leading the assault would, rather fittingly, be Lt. "Reggie" Rawnsley's platoon. 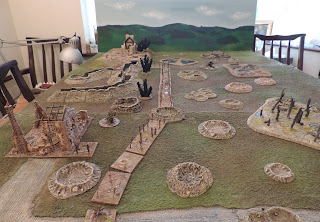 Because of the terrain it would be slow going for the British attack, the normal six turn of the Bolt Action scenarios would not suffice, so the game would go for three turns up until lunch, then on resuming the game a D6 would be rolled, a 1 would mean starting again at turn two, any other result would mean the game started at turn one again, this result would also determine when the German reinforcement section would arrive. The usual roll for another turn would also be used after turn six. 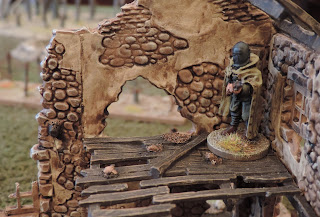 The attacking force consisted of -
2 Lewis Gun Sections
1 Rifle Grenadier Section
1 Bomber Section
1 Whippet Tank
Fire support would be provided by a MMG in a sustained fire role (not in BA a house rule for this game)
and a "Toffee Apple" Heavy Mortar.
The attack would be proceeded by a Preparatory Bombardment.
Defending would be -
1 section with a captured Lewis Gun
1 section of riflemen
1 MMG
1 Sniper
And an off table SOS artillery bombardment, directed by observers in the bunker on Church Hill.
Reinforcements would be, dependant on the dice throw after lunch for the extra turns, a Storm Battalion section or a normal rifle section. 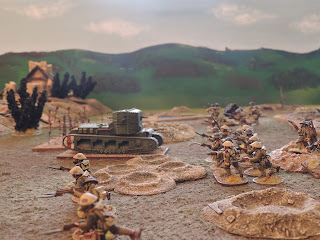 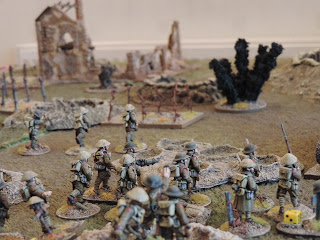 The British attack proceeded slowly across the churned up wastes of No -Mans Land, meanwhile the Germans took the opportunity to Rally off the pins received from the rather effective bombardment, this is a hell of a lot easier in V2, as you ignore pins and just roll against your Morale value.
The sniper and  MMG potted away at the advancing British but did no high impact casualties, meanwhile the British were mounting pins up on the section in the trench, the other German section remained in the church crypt ready to counter any British infiltration. 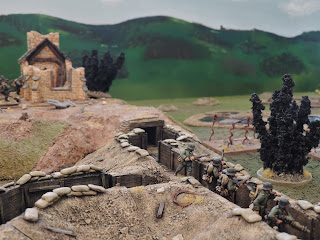 The pins had mounted up on the section in the trench, it was now time to rally them off, but to late! the British dice came out first and the Whippet had found a gap in the wire from the bombardment and was advancing headlong towards them, would their nerve hold? 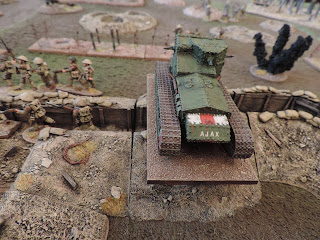 Would it hell as like, they scattered to the four winds. This now left the Whippet in a commanding position on the trench line, covering the exit from Church Hill and lending fire to the sections keeping the German MMG and sniper under fire in Shrapnel Villa.
With the final turns approaching it was now do or die, Lt. Rawnsley sent his first section down the trench and into the tunnel to the crypt, where a furious and bloody melee continued until just two Tommies remained, these were then unceremoniously evicted by Lt. Weiss and his assistants, who too were seriously wounded. 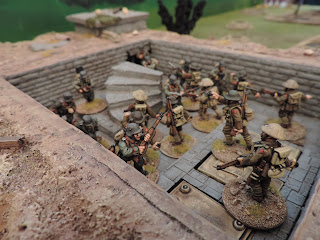 By then the second British section appeared, the bombers! these were veteran trench fighters, the Leutnant stood little chance, it is not certain whether he escaped or was bundled down the tunnel a prisoner, either way he has disappeared. Just then reinforcements arrived but not alas Stormtroopers, although they fought bravely for the Fatherland the rifle section was no match for the seasoned British troops.
Despite the negative waves at GHQ another resounding victory for the British, the Big Push can continue. 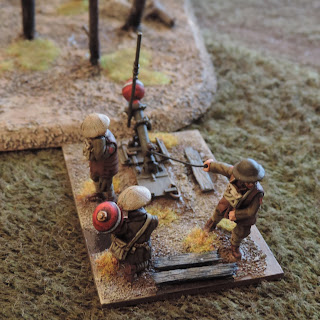 The fearsome Toffee Apple Mortar failed to get on target, much to the Germans relief. 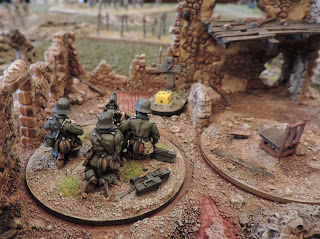 The brave men of the MMG section hold off the British even when reduced to one man, little did they know the attack was just a feint, such is war.
Another enjoyable game with second edition, the changes are good for the most part, OK, BA is still far from perfect, what game is, and still has its quirks but there is no denying it gives an exciting "game" overall, I think so anyway and that's what matters to me.

Looking back over the blog it was March when we last played a Spanish Civil War game, time to have another run out I thought. We would be using Bolt Action again but with the new edition plus the modifications for small squads from the last outing and again anarchist units would have to take an order test to change move orders. 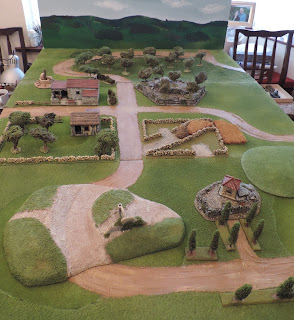 The objective of the game is have possession of the crossroads at the end of the game, turn 6 or 7 if an additional turn is rolled, to have possession means that you have to have a unit within three inches of it and no enemy within three inches of it, the buildings have been positioned so that they are more than three inches away.
The Republican forces will based on a die roll enter the table at one of the two roads on the left, on a 1 to 3 the top one and 4 to 6 the centre one.
The Republican forces consisted of -
2 10 man Anarchist squads all with rifles, inexperienced
2 10 man International Brigade squads, both with a LMG, regular
1 HQ 2nd Lt. and two assistants, regular
1 T26B, regular
1 Armoured truck with a turret mounted LMG, regular. It could not move off road.
The Nationalist forces must enter on the right hand middle road, their force consisted of -
3 6 man Foreign Legion squads, one with a LMG, veteran
3 6 man Carlist Militia squads, one with a LMG, regular
1 10 man Falange Militia squad, inexperienced
1 Foreign Legion 50mm mortar team, veteran
1 Foreign Legion37mm Anti-tank gun, veteran
1 HQ 2nd Lt. and two assistants
Both sides start off table, the Anarchists would need an order test to enter, the Nationalists could leave squads off table to enter on turn two, but if they did so the unit would then have to take an order test to enter.
The Republicans would have a tough time achieving the objective given the Nationalists flexibility with their squads, this however would be alleviated a little with having the only armour on the table. 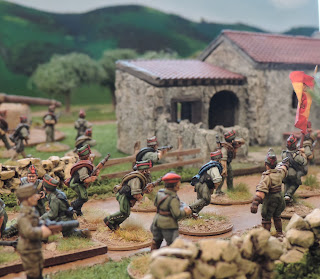 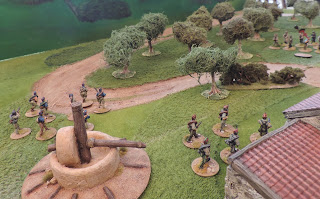 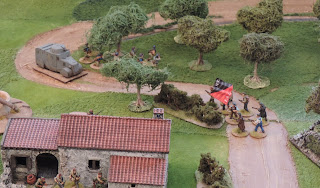 Despite the disparity it was to be a very close fought game, although in the first turn the Nationalist dice came out one after the other, they had no enemy to react to and a bottle neck at the entrance point ensued, forcing the Nationalist to leave the Carlist militia off table till turn two. The Republicans were also hampered by having to dice which road to enter on, which left the truck and a Anarchist squad on the high road.
The Nationalist really needed to knock out the T26, a task in which it failed miserably, leaving it in possession of the crossroads, the flanks were side shows really, with the Falange playing cat and mouse with the truck and the Carlists and International Brigade jockeying for position on the other flank. A last gasp attempt by a Legion squad to assault the tank failed, no turn 7 was rolled which left honours even at the crossroads and both sides having lost two units,
An honourable draw. 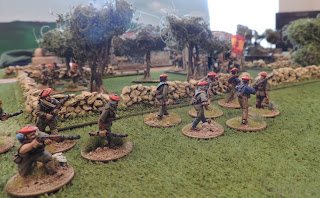 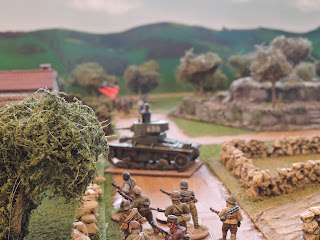 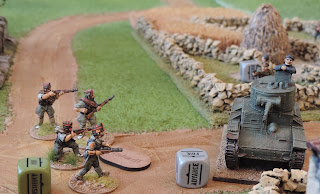 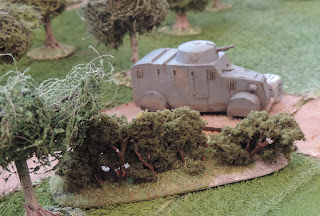 We thought the new version of the rules worked well in the game, the officer actually having a command role is a big plus in our opinion and the templates were not as bad has I thought they would be.
With regard to forces I just threw everything except the Nationalist Panzer 1 and the Republican Anti-tank gun on the table that I have painted, just out of interest I again worked out the points after the game, the Nationalists coming in at around 740 and the Republicans 550.
Not balanced? Well neither was the last weeks game and the Russians with less points won, this week, were it not for some dire dice rolls by Dave so could the Republicans I think, Dave may disagree of course.
So a question - Equal points games, balanced or bollocks? ;-)

Having being engrossed in the mountains of madness in my spare time, see Tales From Rhanzlistan for details, I had not planned the proposed Rapid Fire game, so I reverted to the old faithful Bolt Action. Having both had busy weekends we did not want a too tactically challenging game so I went for the good old Maximum Attrition scenario. 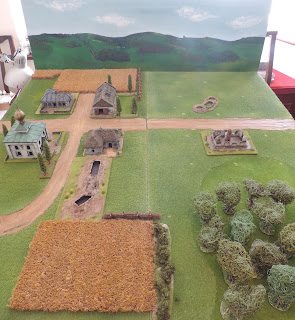 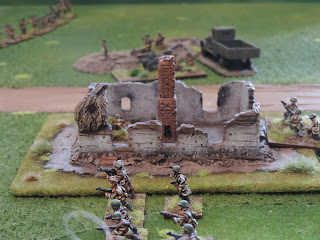 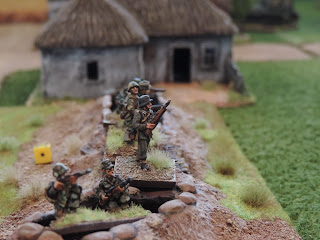 Dave's Russians had a lot of open ground to cover so speed was of the essence, I was a little cautious and should really have made for the barn before the Russians, instead I sent a squad through the wheat field to counter the Russian advance on the barn. The Germans soon found out that contrary to what Brig. Young allegedly told his men at Dieppe, standing crops do not deflect bullets effectively and it was soon 1 - 0 to the Russians.It was at this point that I should really have occupied the barn, but must have had a rabbit in the headlights moment. Things on the other flank were fairly even neither side gaining any real advantage, I should have done better against troops in the open, but come on four 1's out of six shots, is it just me?
I managed to even things up after lunch by taking out the Russian A/T gun, but then the Russians who had due to my tactical lapse had occupied the barn surged out and assaulted the Germans in the opposite building 2 - 1. Meanwhile over on the left the Germans could still not make their shots count, whilst the combined fire from the Russians finally saw them off, it all went pear shaped for Germans after that. Final score at turn 6 was 5 - 1. I must really use the down option more, perhaps with the -2 to hit in V2 I will remember to.
A most enjoyable game for a throw the toys on the table bash. 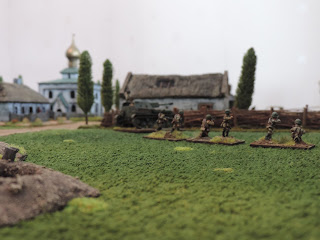 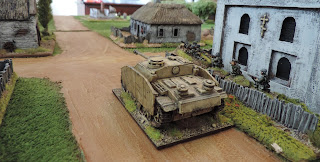 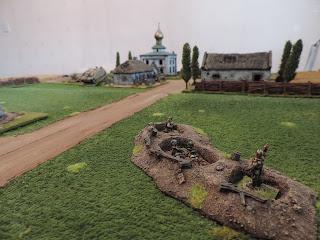 The great Comrade General Robinski is off to the mountains of Rhanzlistan next week I believe.