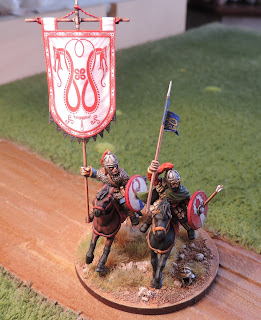 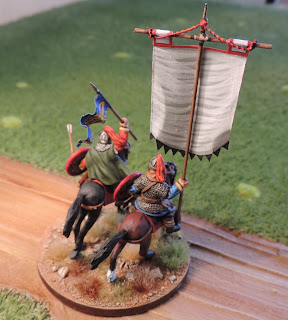 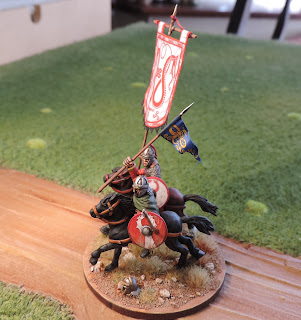 The latest addition to the forces of  the rapacious Biccagern aka The Viper
Footsore Miniatures except the Roman being given the coup de grace which is an A and A Miniatures figure and the Goth musician which is a Foundry Casting Room miniature. LBMS banner and shield transfers, except for the undecorated one ;-)
Coming up next is the Viper himself. 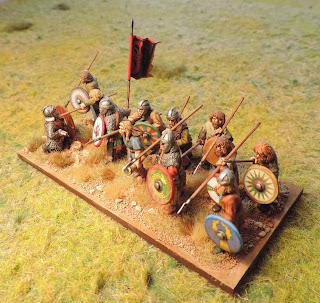 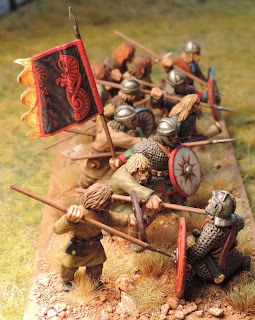 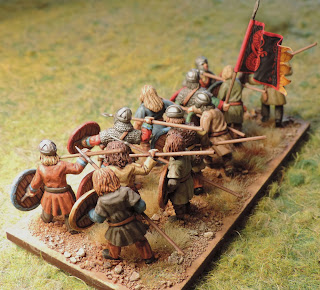 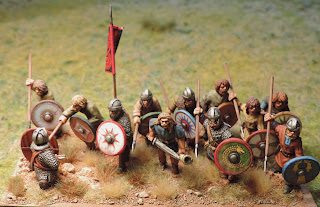 A general for my 3rd century Roman army.

A and A Miniatures figures, Footsore Miniatures draco, Warbases base, Gamers Grass tufts. 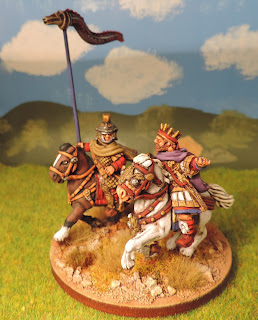 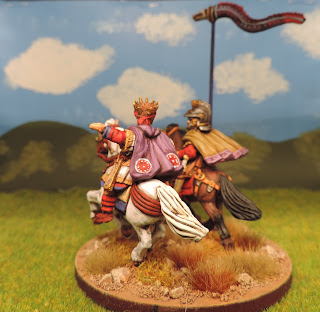 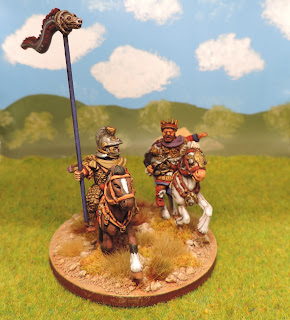 Working on the last four figures for another unit of Goths, three more units and a general and there will be enough for a game. 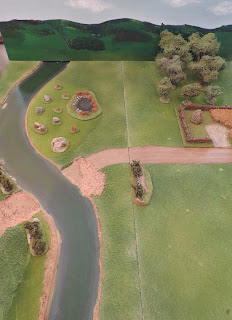 Lord Rawnslious deploys us for battle. 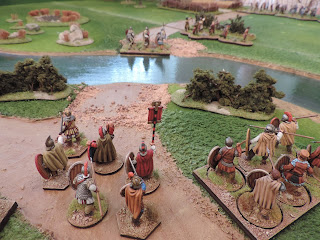 My unit is on the left, out of picture. Another unit has been posted to the far right the other side of the marsh to counter any Seax incursion there and if possible and the opportunity arises effect our own flanking move. The approaching Seax can be seen in the far distance. 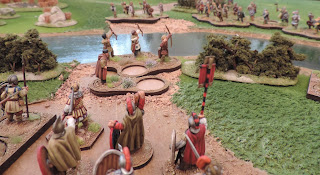 Our archers are forced to pull back and our advance unit have been destroyed, the Seax line the river bank for an all out assault, meanwhile over on our far left the flanking force begins to move, but the water flow is fast there and they make little progress. 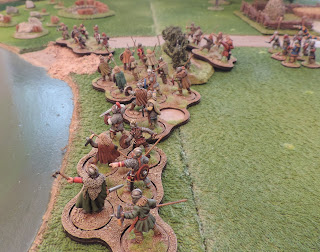 Pengist brings up the rear, attempting to get the measure of our leader and to counter any threat to the flank, our unit attempting to do just that can be seen in the far distance, their going as been slow and they are no longer in a position to really effect any assistance to the fight at the ford. 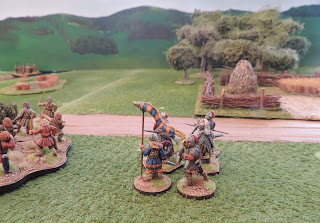 The Seax attack and destroy our archers. 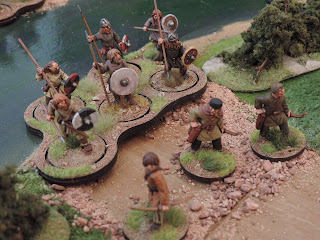 They in turn are attacked by our Lord, leading his hearthguard forward in an attempt to throw them back across the river, these troops of Pengist are a tough bunch and our men are pushed back, but keep their order, alas they are now so few. Our unit to the right have slowly been whittled down by enemy archery and are now being advanced upon by the Seax, my unit and the one on the left flank which is too far away are the only fresh units left, our Lord decides to retire and fight another day. 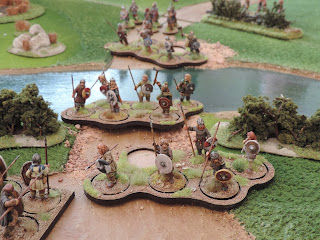 Our champion defiantly waves the head of Penda Fudd at the approaching Seax, this appears to un-nerve them and we are able to retire unhindered. 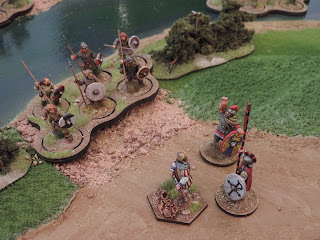 Pengist does not order a pursuit, he will regroup and get the lie of the land before any further advance, cunning is he methinks. 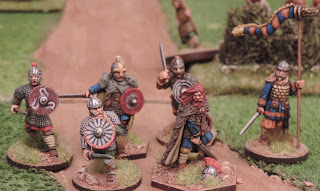 We begin our withdrawal, the remnants of our Lords hearthguard protect the rear, should the Seax decide to pursue. 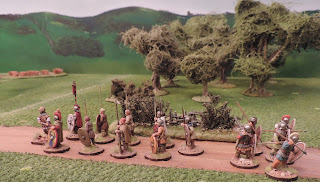 We will fight again, but the Seax keep coming, we cut off a head, another grows in its place, our Lord says we must have faith in God, but like the Seax themselves their gods are many, can we prevail?

A brief game interlude while Dave is away, next game will be at GHQ, period to be confirmed.

Heavy rain over night has done little to raise our spirits, Baldinus says that the God of the new religion is with us, although I keep my image of Mithras with me, just in case. The heavy rain has given one thing in our favour the river and surrounding marsh will be even more difficult to cross now.
We await the arrival of the enemy, the rain must have slowed them........
Posted by Phil Robinson at 02:56 No comments:

Following the recent defeat (clicky) of the Seax and the demise of their leader Penda Fudd we were able to gather fresh forces and regain much lost land pushing the Seax further back towards the sea. It was with great dismay that we learned of fresh invaders, with which they soon joined forces, they are lead by a fearsome leader, rumour has it that he is more terrible than Penda Fudd, his name is Pengist.
Our forces were not able to engage these fresh troops after our hard campaigning, so with deep regret our leader Rawnslious has pulled us back to rest and await fresh troops. Scouts say that the Seax are again on the march, we have made our stand here at a place named Ednas Ford.
To be continued.....................................................
Posted by Phil Robinson at 08:30 3 comments:

My 8th Roman unit, an auxiliary cohors, this gives enough to play a basic game using Neil Thomas AMW, Impetus and To The Strongest rules sets, just need to add a general to for the last set, which I am working on currently together with another unit of Goths for the opposition. Figures are all from the superb A & A range, shield transfers from LBMS, I have also done another two casualty/disorder markers, the Roman is again a slightly modified standing A & A figure, while the Goth is a Foundry, Casting Room Miniature.
Whilst talking Roman pop over to Dave's GHQ Blog for the latest attempt of my Late Roman Alter Ego, Huttus Baldinus to overthrow the tyrannical Pompous Maximus. 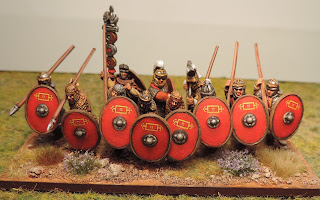 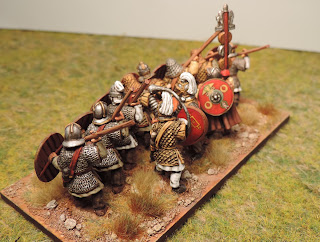 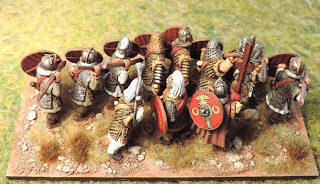 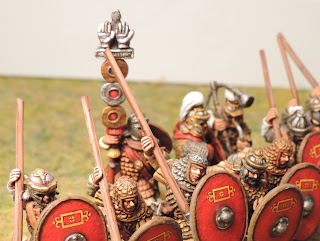 Here are the "Dead Jims" 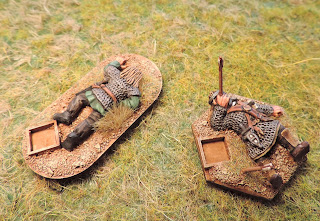 The Roman force so far 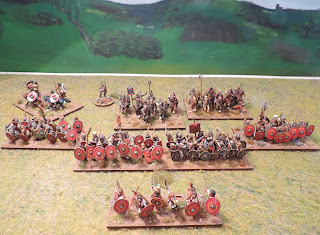 Next game is here at OHQ next Tuesday, period TBA