Sort of. You may recall that we intended to use the new "Rebels And Patriot" rules ahead of our FIW games for this game, however as we intend to use them just for those games it didn't seem worthwhile working out stats for the FCW, so I decided to use the usual Black Powder rules. However when I came to set up the table Sunday night I had a problem with the dining table extension pins, so it was back to Plan A, a small game on a 4' x 4'. I had the mad idea to still use Black Powder but with Bolt Action dice to activate the units, the scenario I originally planned for R&P saw the Carlists defending a hill top awaiting reinforcements with the Isabelino forces attempting to oust them before they could be reinforced. A black order dice would be added to bag, once drawn the turn would end and the reinforcements diced for, 6 in turn then 5 or 6 turn two and so on. If they appeared a D3 would be rolled to determine how many battalions appeared, reducing to a D2 in the next instances if they did not all come on first off. Mad? well it certainly changed the game dynamic and lead to a spiffing game with the advantage passing to both sides, if we had been using the rules as is I would have been beaten in turn three I thought.
Needless to say such was the intensity of the game I did not get to take many photos, here they are 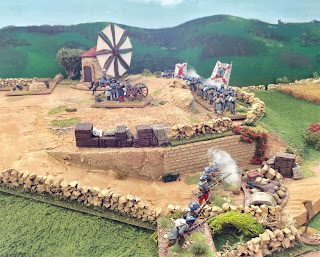 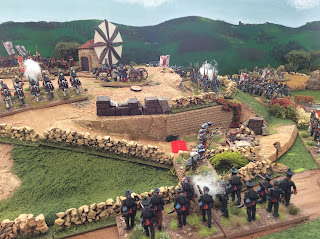 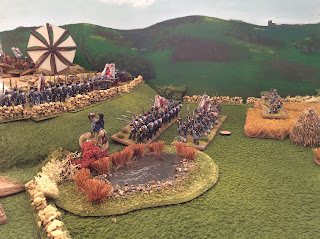 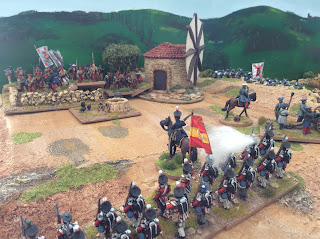 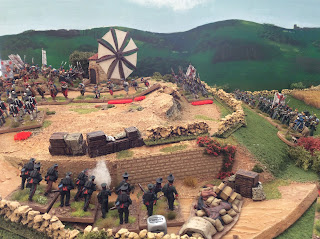 A few notes on how we used the Bolt Action dice and commanders
Dice
Advance - Move one move and fire.
Run         - Move two moves no firing
Fire         - Fire
Rally       - Rally* Commanders only (See commander notes)
Ambush  - Reserve Fire for later in the turn
Down      - Lie down and benefit from being in cover
Commanders
Each commander would also get a dice, when activated they could draw another and activate a unit, if they wished to rally he would have to join them and rally them as per the rules using his leadership, he could also join a unit and issue a follow me order again by passing his leadership, they could then move three times.
We did not allow initiative moves, although we may consider this if we play again. I think that covers all we did, Dave will no doubt correct if I have erred.
Who won you may well ask, well lets just say the Carlists, yours truly, snatched defeat from the jaws of victory.

Over at GHQ next week for an Italian Wars game ahead of the WI photo shoot.

PS. We really like the new rules for rockets, last week in the Zulu War game at GHQ, one exploded on leaving the tube in this game it did a U-turn and soared off table behind the battery.

Despite gaming World War Two since 1994, I had yet to make a marked minefield. With an upcoming scenario planned which requires one I decided to set to, I collected two bespoke bases from Warbases at R.O.B.I.N. I decided the first would be in a cultivated piece of land, the next will be just general open ground, so that they can be both be used for general scatter terrain also, I will not add wire or signs, these will be based separately, as you can see below .
First I primed the base and glued down some corrugated card to form the cultivated bit, once dry this was covered in fine railway ballast. The outside perimeter was covered with Jarvis desert sand and stone mixture with the partly built wall made from stones from them also. 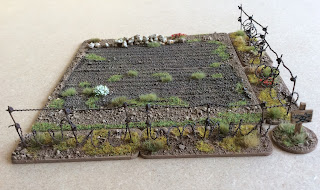 I cannot remember who makes the picket posts, I always get a pack when I see them at Warfare, tufts are Gamers Grass and the flowers from Debris Of War.

Head over to Tales From GHQ to see how I got on in the Transvaal on Monday, next up here is a First Carlist War game.

Early last year I noted that all of my north European buildings were either ruined or partially ruined. I saw that Charlie Foxtrot would be attending WMMS so I duly ordered a dormer house for collection. Last month I finally got around to building it ready for the table. I have ordered some suitable bits and a base to make a garden from Warbases for collection at ROBIN next week. 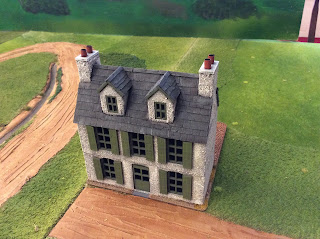 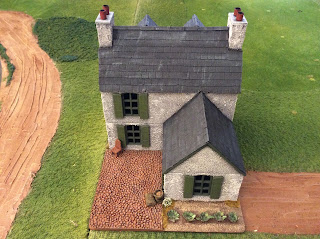 Cobbles are Wills HO railway range, the chair and sacks from the bits box, can't remember were they are from, base from Warbases and the cabbages are a gift from Matt Bickley, paper press outs you stick together to form the plant.

Dave came over for our weekly game to command the Soviet forces in a game using Battlegroup rules, the scenario however was based on one in the third Rapid Fire supplement "Scenarios for the Russian Front 1941-45".
The Soviets task was to defeat the German force and block the Narwa rollbahn, just off table, in nine turns.
The Germans were let off for three turns with the Soviet radio net found wanting, however in the meantime some deadly small arms fire caused the Germans to take some early morale hits. When those rockets from Katy finally arrived, ouch!
The Battle Rating counters I drew tended to be a tad on the high side, by turn seven it was all over with the Germans exceeding their total of 25. The Soviets had taken 15 against their total of 25.


Next time here in OHQ we will be giving the Osprey rules "Rebels and Patriots" a try out in the Iberian peninsula. 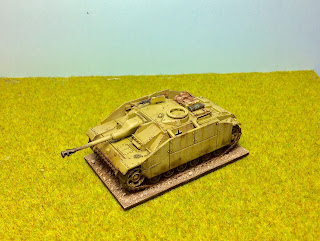 On the table tomorrow, will it be subject to "The new toy on the table curse"?
I wonder.