All Quiet On News From The Front

Well almost, we managed to get a game in a couple of weeks ago or so. We played a straight up Neil Thomas AMW game of eight units each, primarily to try out my new Deep warband addition. Did it help? well not really sure as Dave's dice throwing was shall we say well below average.

The game had the usual to and thro, with the advantage swinging to Romans and then back to the Goths and eventually back to the Romans securing Baldinus a victory over his arch nemesis Bikka.

I didn't take any photos as the next game scheduled here was another outing using To the Strongest, it seemed silly to have practically the same. That said should we be able to have a game next week, who knows these days when the powers that be appear to be winging it, we will instead, having took delivery of Rapid Fire Reloaded be giving them a try.

I have not painted much for myself being busy on commissions and going away for a couple of weeks, on my return I have managed to finish the two Pegasus Models Tiger II's I started. 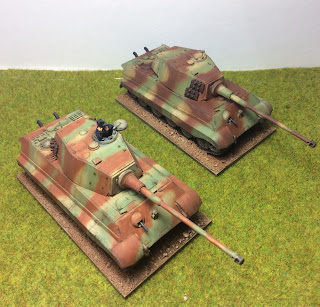