We played out another early Great War game to try out the amendments of our embryonic rules for the 1914 period, made after our last game, below are a few photos taken during the game a full account can be found on Dave's blog

Now where was I? Ah yes, seeing that there were no gaps in the wire Jon diverted his attentions to the German left, leaving a covering force on the right to await the arrival of the tanks and positioned his Lewis teams to keep the German centre occupied. The Germans in the meantime were causing considerable casualties on the attackers, I had never seen Dave roll so many fives and sixes. With the non arrival of the tanks things were looking good for the Germans just prior to our tiffin break. 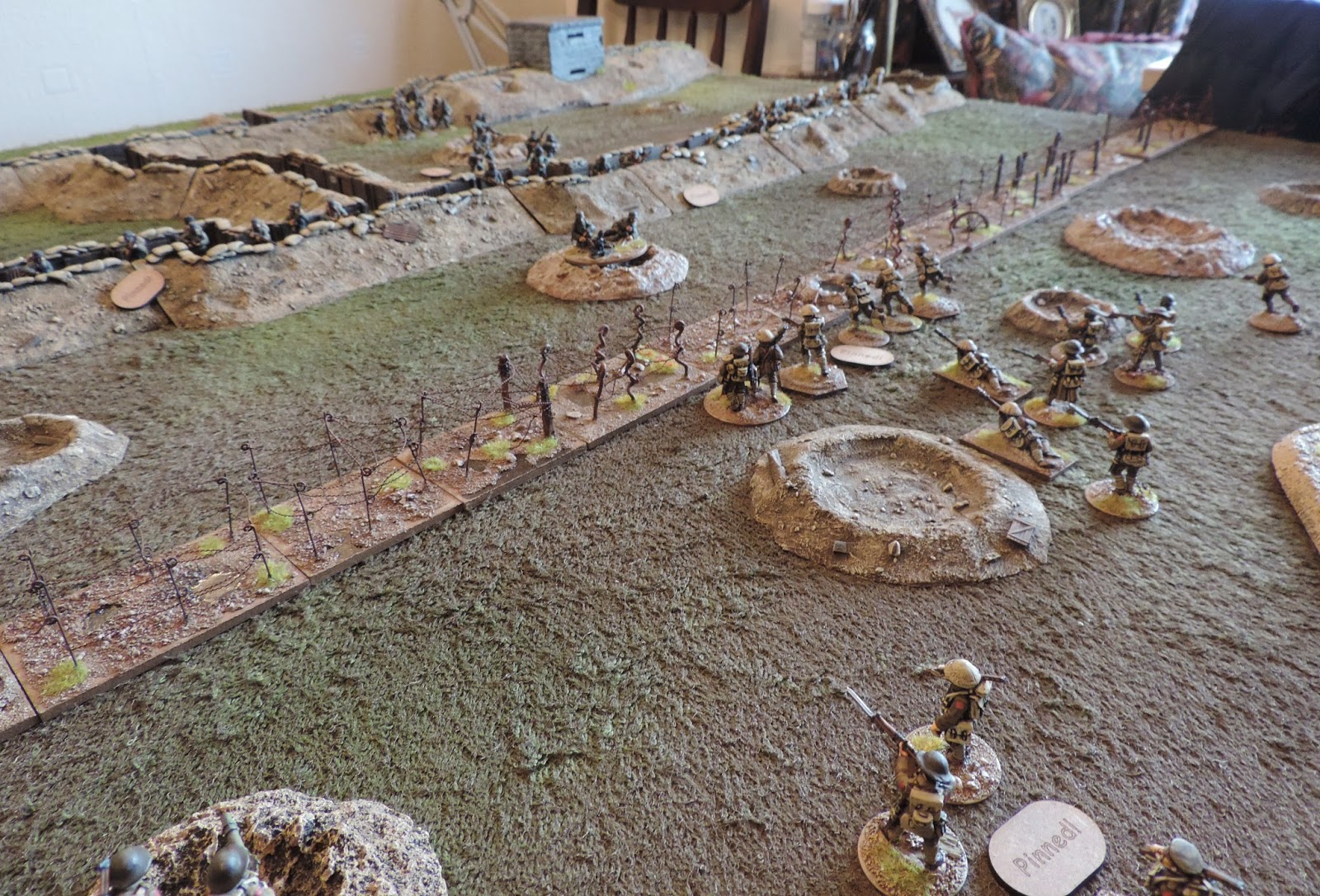 Back after tiffin the British tanks finally began to arrive and push on towards the German right allowing the British to continue their attack on the German left, the dice gods now decided to desert Dave and the British trench fighters were able to get into the German trenches, one can only assume that the German MG gunners panicked at the sight of the tough trench fighters streaming towards them, an event drew an extra move card which took them into close combat range, similarly over on the right the German anti-tank gun was unable to deliver any damage to the advancing tanks, however the turn of an event card enabled the Germans to put an ammo low marker on the MKIv which forced them to engage at effective range only, just as well as Dave's Germans were steadily gaining pin markers, one is always in a quandary, do you use your order dice to rally off pins and maybe let the enemy off getting firing casualties that turn or do you attempt to keep up the firing and risk more pins? The German anti-tank gun was then knocked out and things looked all up on the German right, luckily the A7V then arrived followed soon after by the storm troop counter attackers, Dave sent one group to occupy the bunker and the other over the top to wrest back control of the left flank, meanwhile in the centre the British rifle grenadiers and Lewis team kept the Germans in the centre under pressure, knocking out the grenade launcher team. The Brits did not have it all their own way in the centre, an event drew a stray artillery round card that landed plumb in the middle of them, also over on the German left the trench fighters holding the objective were gradually been whittled away, eventually only Corporal Jones remained who single handed held on until it was to late for the Germans to wrest back control, as the British consolidated their attack on the right and centre, eventually knocking out the A7V. One must not forget the myopic British sniper, how many ones did you throw to hit Jon, however he did finally manage to dispatch the German CO. 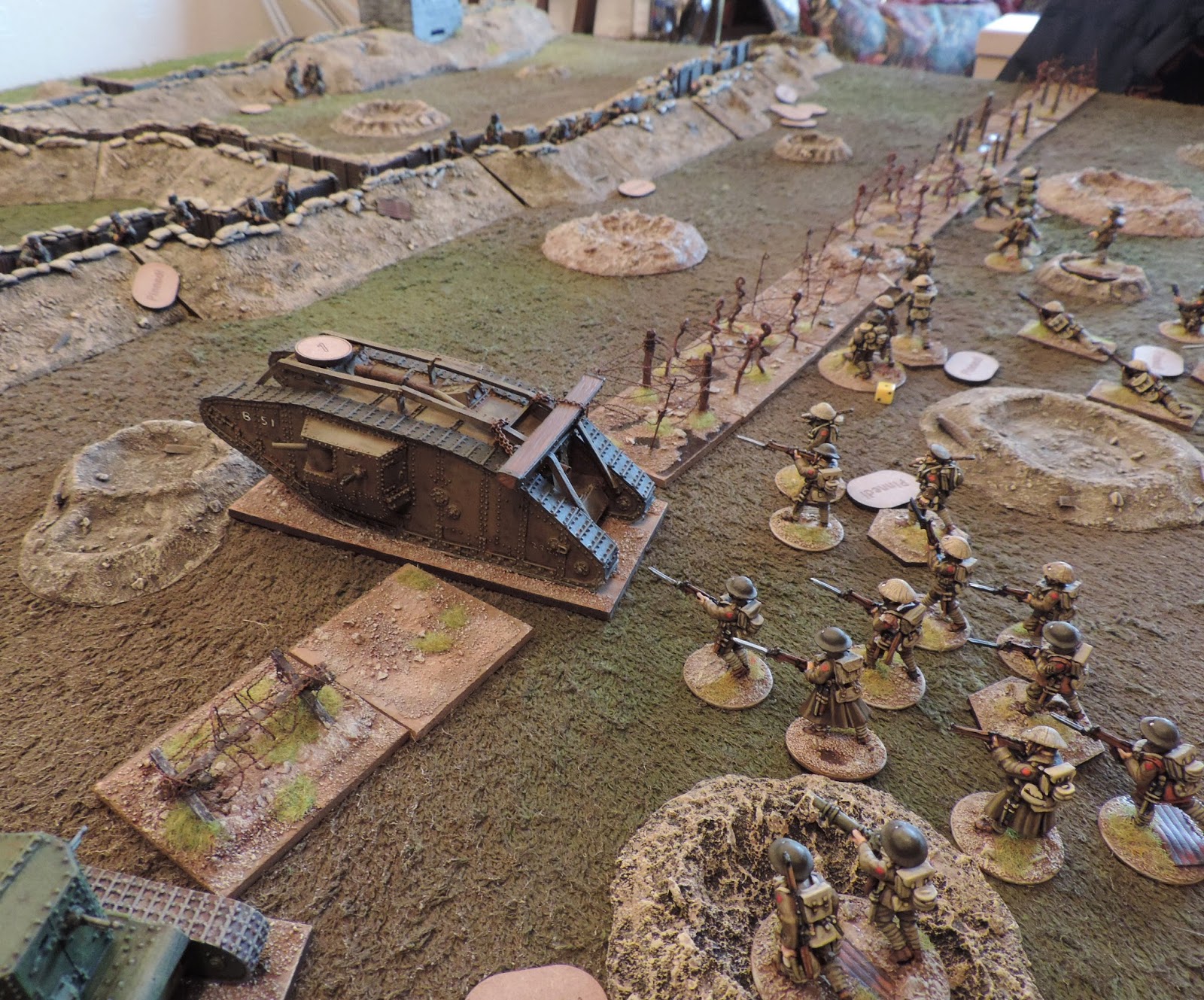 After turn 12 the D6 throw gave a further five turns this really sealed the fate of the Germans, the Brits held the two front line objectives and although they had no infantry available to occupy it the villa could not be contested by the Germans the only viable force they had remaining being the troops in the bunker, so with the British holding two and half of their objectives they were given a marginal victory.
Posted by Phil Robinson at 16:14 4 comments: 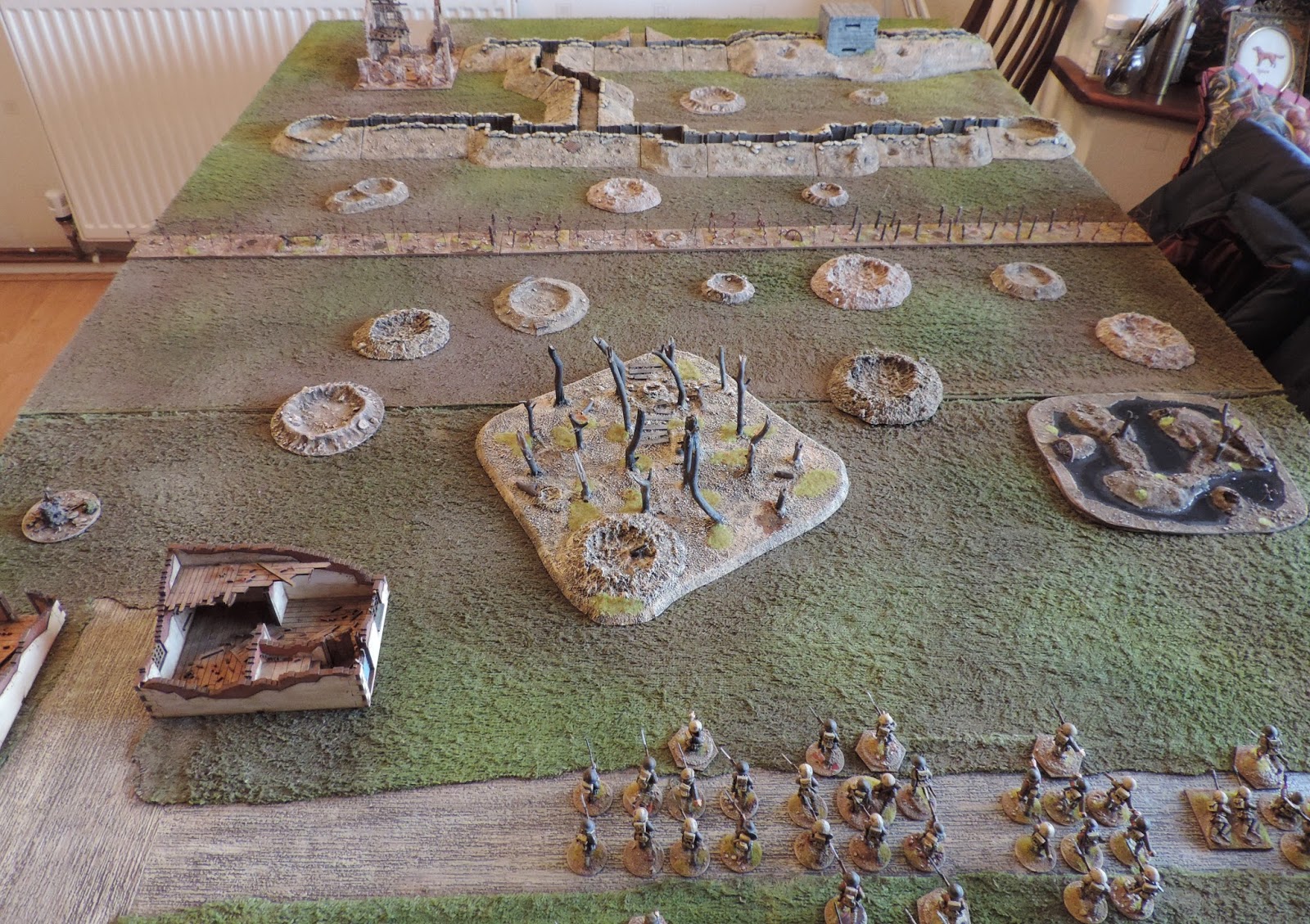 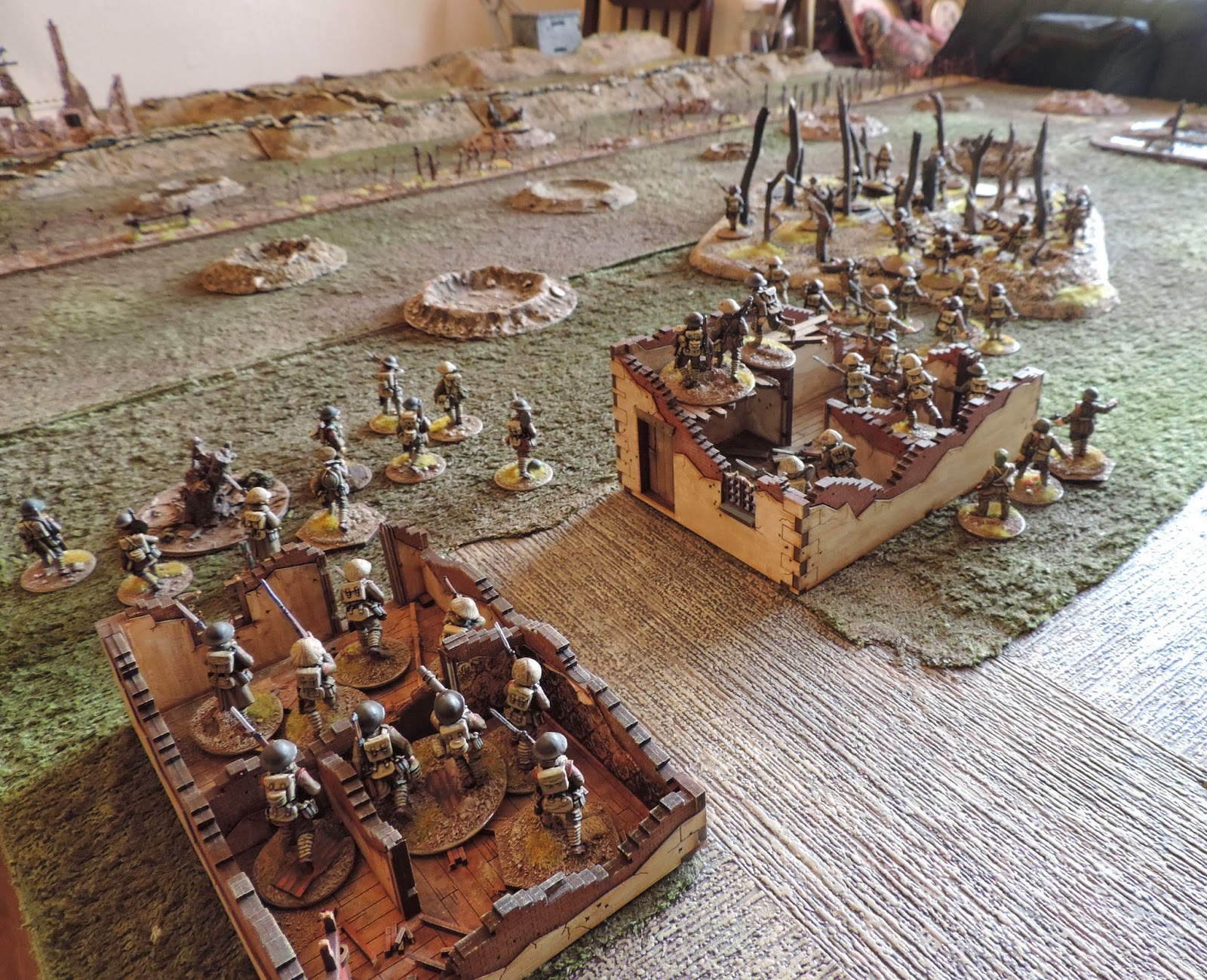 The British initially attacked on the German right flank and centre, unfortunately the bombardment had only broke the German wire over on the German left flank and straight in front of the deployed Maxim!
To be continued
﻿
Posted by Phil Robinson at 16:09 2 comments:

A tad quiet on the home front, very busy getting stuff done for display or delivery at Salute at the moment. However I have managed to squeeze in the Spanish factory from Empress Miniatures, I got this at last years WMMS and thought it high time that I got it based and painted. 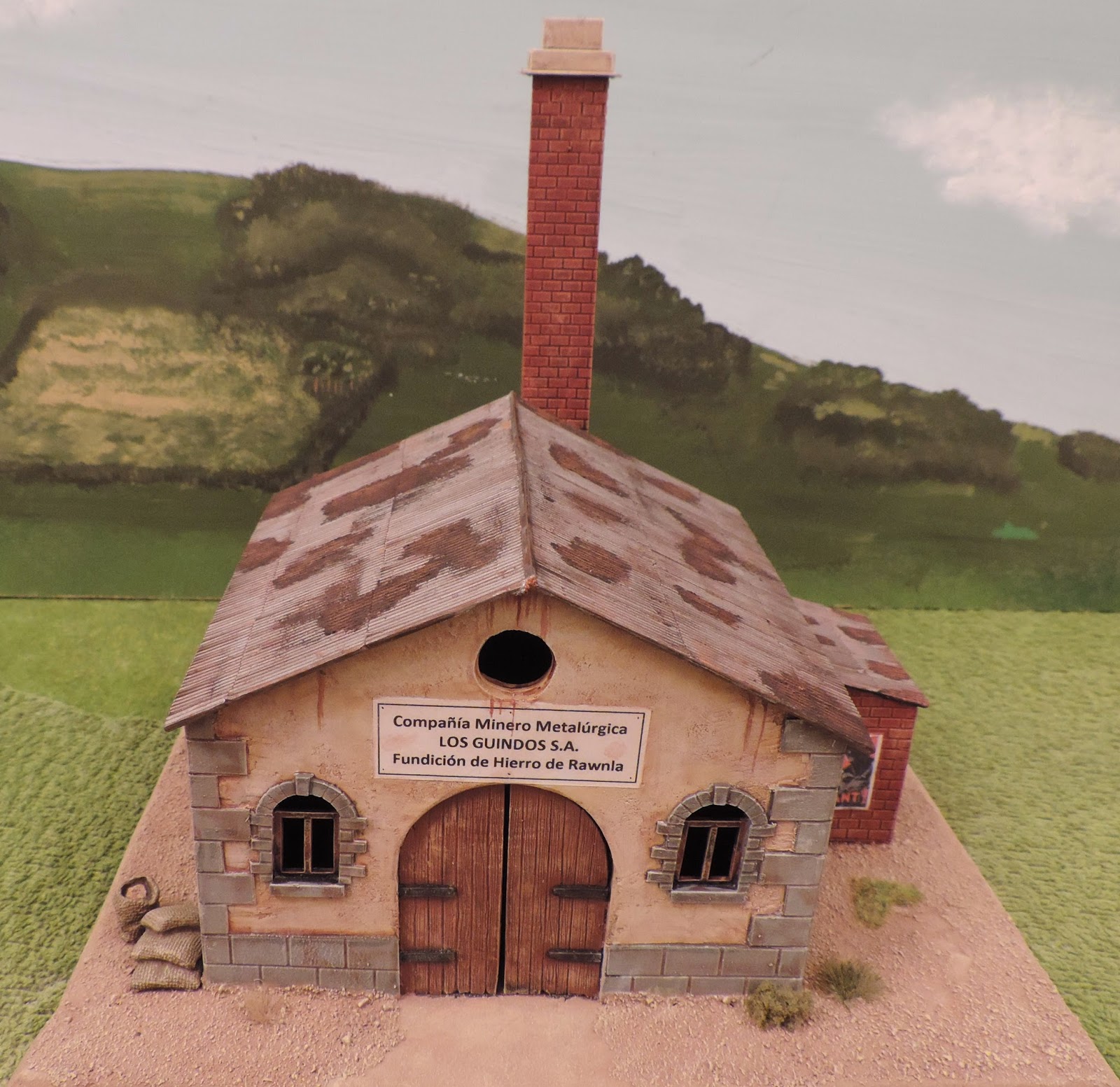 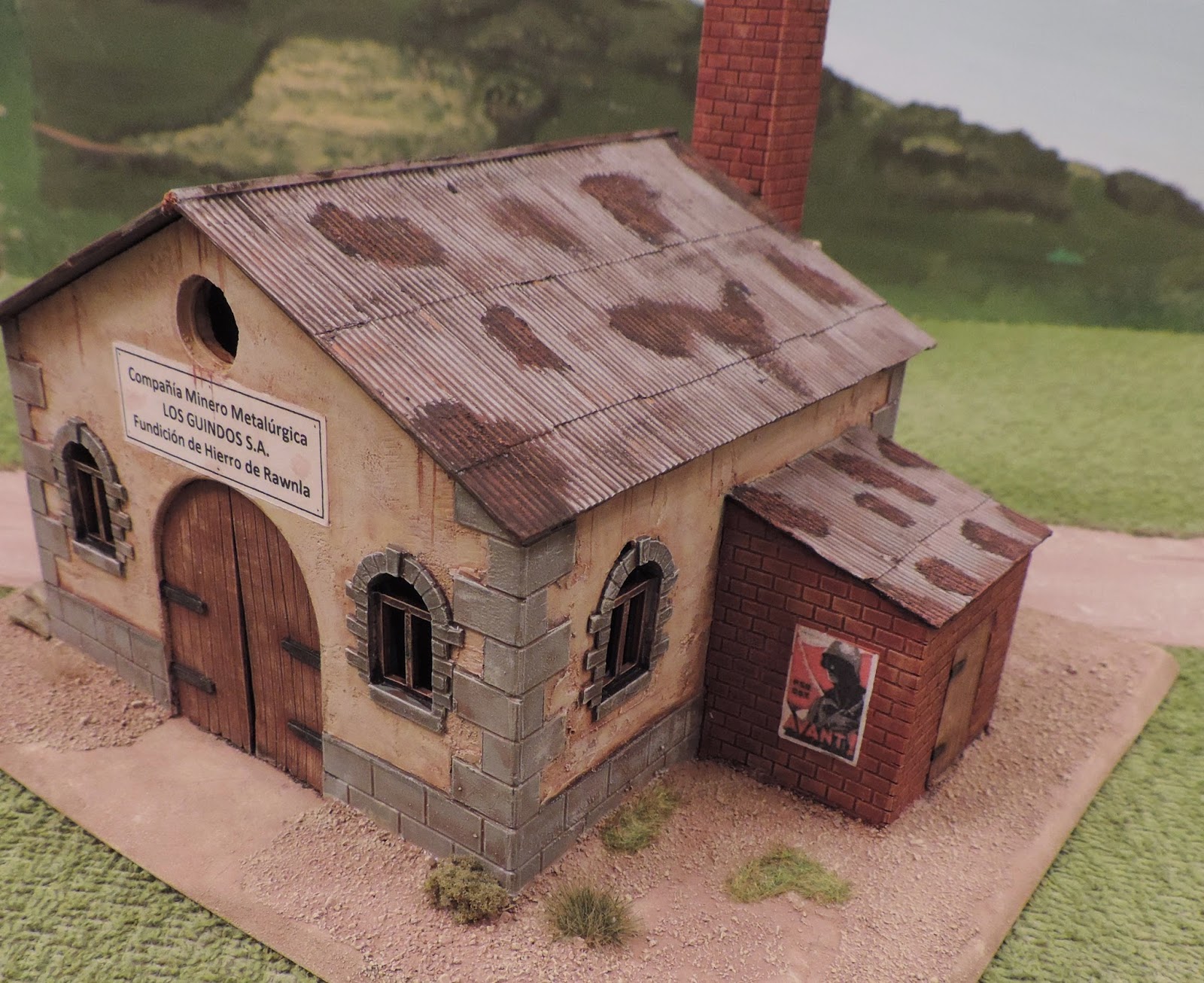 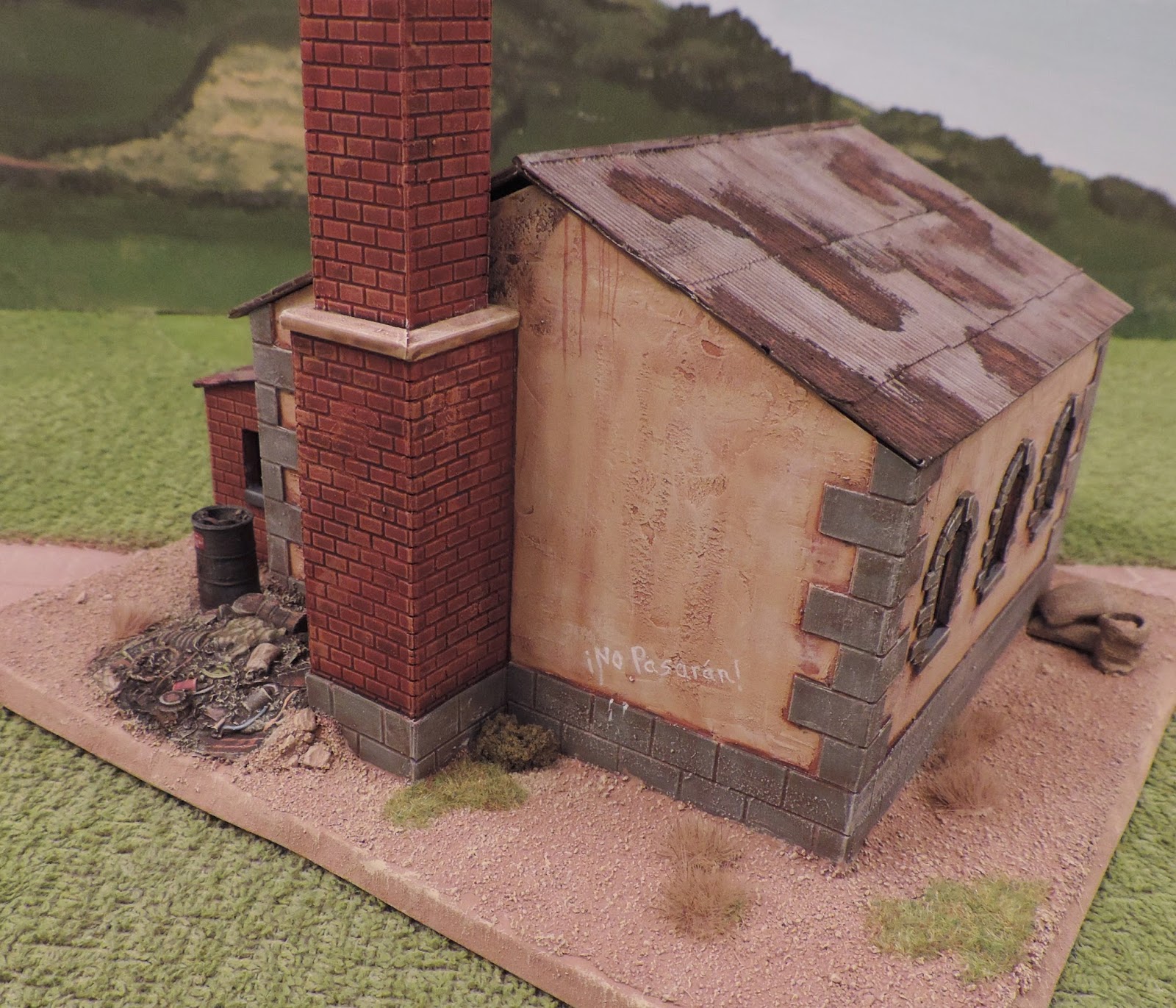 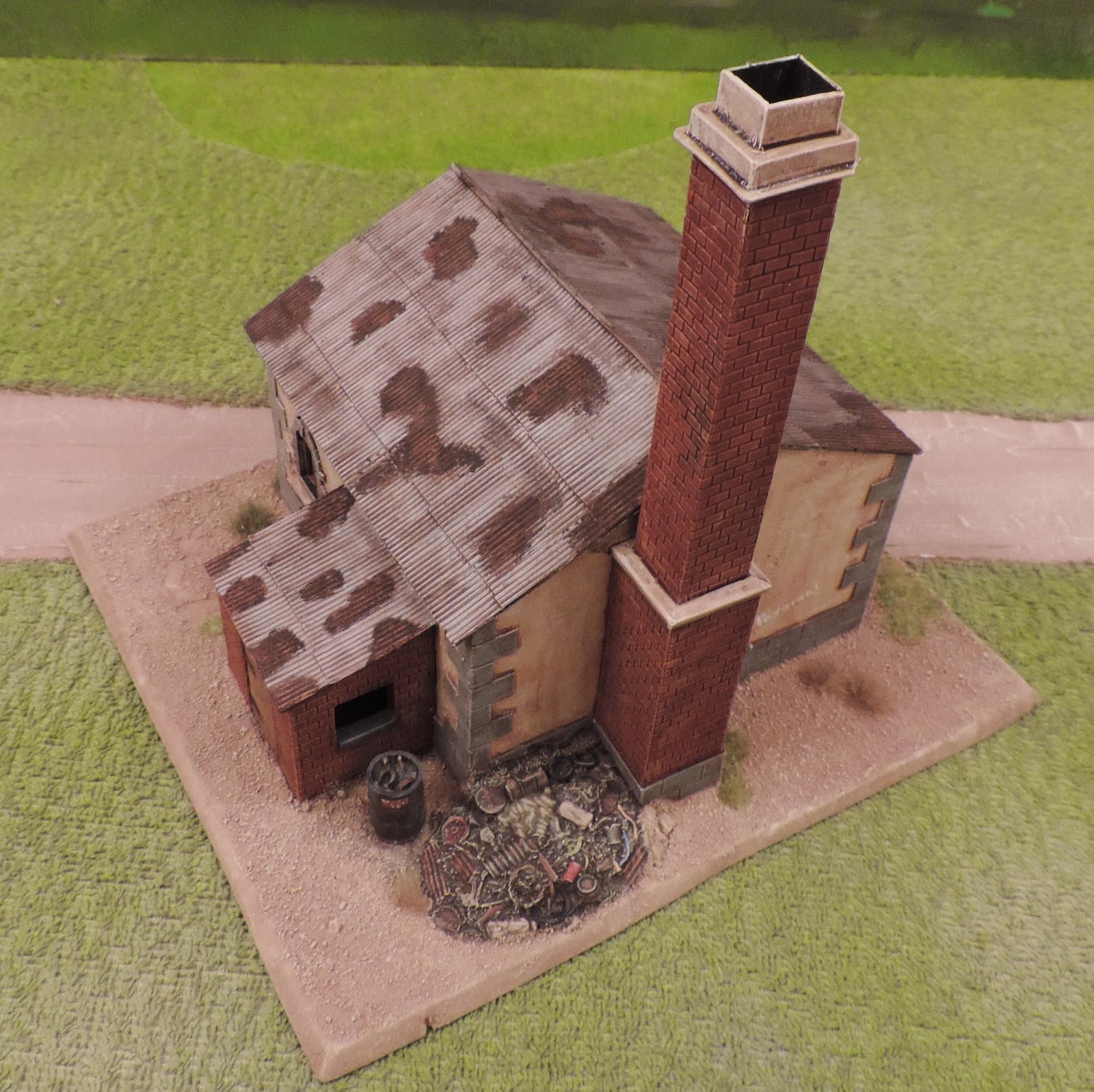 Hope to get in another Great War game next week, all work and no play and all that.

Dave popped over to OHQ recently for a late Great War game, using Bolt Action rules with the usual Gajo Games amendments, a simple breakthrough scenario to blood the British MkIV tank I have recently painted and to try out my new event cards. A dice is added to the pot with the usual Bolt Action dice, when drawn an event card is also drawn, these have various effects such as low ammo, an extra move, stray shells, snipers a turn end card and such like. The game would last ten turns with a D6 throw to decide if another would be played.

The British would start the game with seven sections on the table comprising, two Lewis gun sections, a bomber section ( these are classed as tough fighters and get two dice in close combat)
a rifle grenadier section and three rifle sections, the tank having being delayed would appear on a D6 throw beginning in turn two, requiring a six then five or six next turn etc. until it appeared.
The Germans would start the game with three rifle sections in the front line trench, one with a captured Lewis gun and a rifle section in the second line trench together with a grenatenwerfer, in the pillbox was a Maxim gun. Two sections of stormtroopers would appear on turn seven, a bomber section and a flamethrower section.

A great game ensued, probably the best trench game using Bolt Action to date. By turn six Dave thought it was all up for his British forces, by turn eight the game could have gone either way, however by turn ten the last the German force was thoroughly depleted and with the flamethrower section low on ammo due to an event card the Germans would be unable to clear out the British in another turn.

Below are some in game pics. 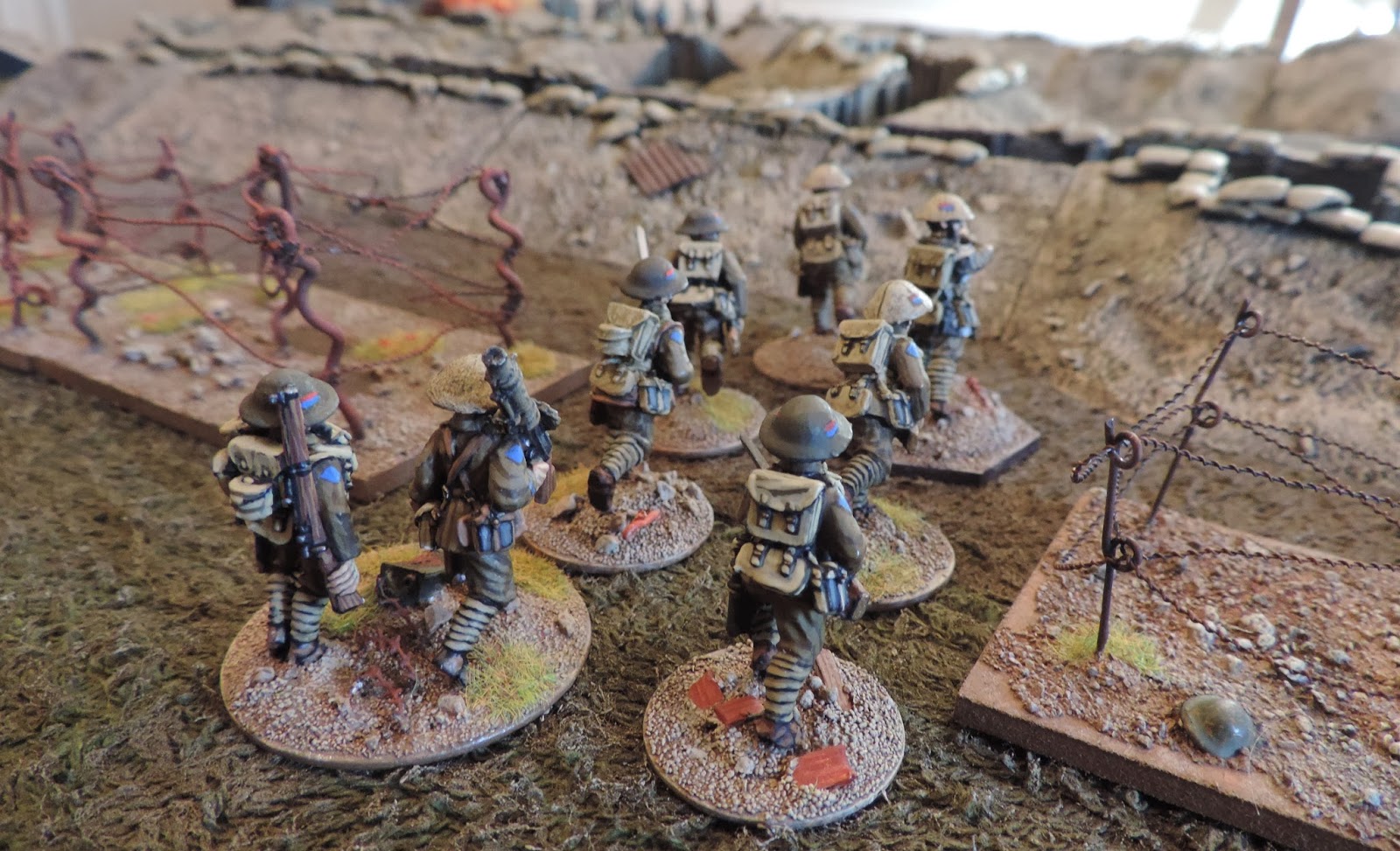 Finished and based these Great War Miniatures figures, sorry about the blurry group shot I deleted the sharp one from the camera by mistake, but at least you can see what is in the pack, three poses two of each pose. I have a few things up on EBay, resin buildings, trees and some odd figures, click on the link opposite if you are interested. 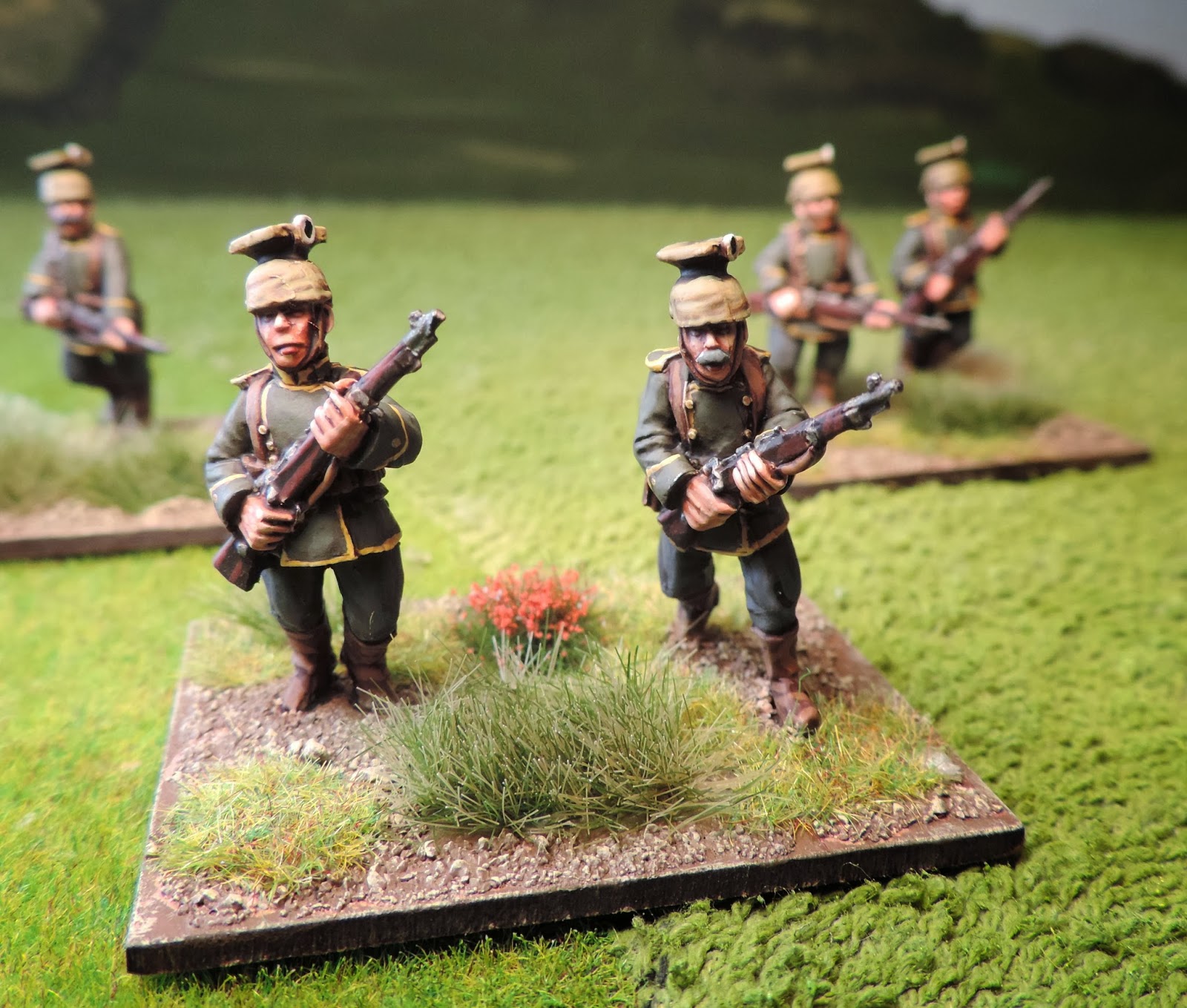 All being well we will be having a late Great War set to at OHQ on Friday, pics and report to follow.