Things have been a tad slow on the own painting front however I recently finished these splendid Aventine Miniatures early Byzantine kataphraktoi.

LBMS shield transfers with a modified to fit banner. 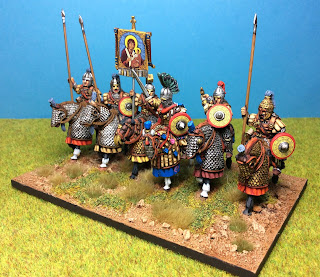 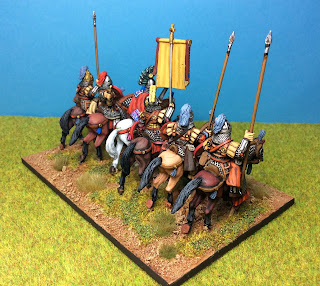 I have added a page of the Bolt Action house rules that I have trialled over a few games, some which have been featured in various AARs have been discarded you may notice. Not necessarily because they didn’t work, some I felt slowed down the game others didn’t really improve or add anything.

The link to the page is in the side bar.

Dave came over to OHQ for our weekly get together, we did a Roman v Goth bash to try out our recent modifications to Neil Thomas's Ancient and Medieval rules, the AMW rule page has been updated accordingly.

I didn't take any photos of the game concentrating instead on seeing the effects of the Goth warband deep additional rules.

It was a hard fought battle both sides initially advancing cautiously, with the Goth archers softening up the Roman lines prior to the warbands engaging. The warband changes gave the Goths more longevity against the legions, however a Roman win was the final result, not before disaster struck. Seeing a gap in the Roman line and old Baldinus and his entourage out on their own, the Equite Singurlares were destroyed earlier plugging a gap in the line, the Goth nobles charged. Although putting up a stern fight Baldinus was slain!

Civil war is now on the cards, Bicclius Maximus has his eye on the throne, Baldinus Minimus beware!

Figures to increase the Roman collection and a figure for Bicclius are being cleaned up and primed.

Jonathan http://palousewargamingjournal.blogspot.com/ kindly asked me if I would like to join Matt http://wargamesinthedungeon.blogspot.com/ via Zoom and play the third game in as many days of his Shoemakers Bridge August1777 scenario. If you follow Jonathan's blog you will know it was an offer you could not refuse.

If you pop over to Jonathan's blog he has written up a report of the first of these series of games, it will be interesting to see how the different players approached the challenges to both protagonists of this excellent scenario.

I will not go into great detail and steal Jon's thunder, my plan was to give the tyrants troops a bloody nose before retiring. Emboldened by early successes I probably hung around a while longer than was prudent, however the militia holding Shoemakers Farm did sterling work tying down several British battalions in what turned out to be a mini Le Haye Sante.

I await the butchers bill from Jon but I assume a strategic if somewhat bloody victory for the British.

A most enjoyable three hours, though it did not seem that long, Jonathan and Fields of Honor AWI rules ensuring a flowing and engaging game.

Once again my thanks to host Jonathan and my opponent Matt.