Room For A Few More

Recent weeks have seen me busy getting various commissions completed so that they could be delivered before the Christmas rush, I have however managed to squeeze some of my own painting in too.

First up a Brazilian volunteer battalion for the War of the Triple Alliance project, another Paraguayan battalion is a third of the way to completion too. 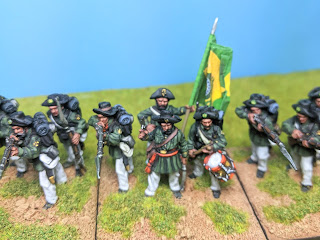 You may recall I said I might need a German MMG team in cold weather garb for the 20mm collection. Well of course I did. 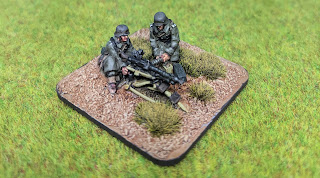 Whilst I was in 20mm mode I dugout some AB Figures in winter looking clothes that I had bought at a York show, goodness knows when. 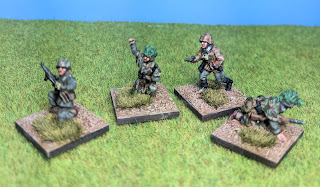 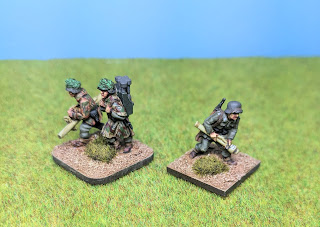 No games planned until the new year, although I may play the third game in my solo Chain of Command campaign I started during lockdown, we will see.

All remains is to wish you all a Merry Christmas and many thanks for all the kind comments, encouragement and inspiration throughout 2021 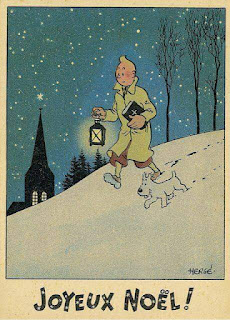 Solo In The Snow

So I set to on my last solo outing of 2021, lets hope I do not have to start the new year with one, yes I am looking at you Boris.

The game would be a German attack on a forward British position to clear the way for the main attack, the game would last until one side exceeded their Battle Rating or at 00.30 hours whichever came first. 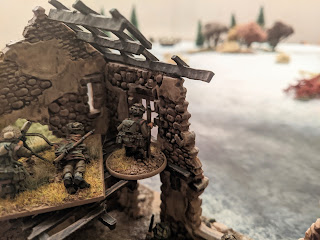 A British Vickers MG keep watch down the road. 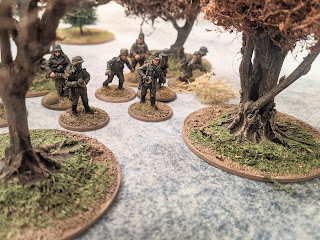 Steiners's foot patrol advance through the copse to probe the British right flank. 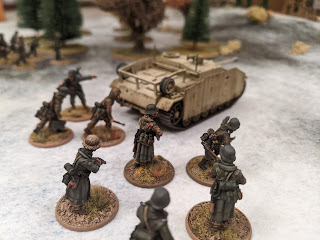 The German StugIII advances in the centre with an infantry squad in support. 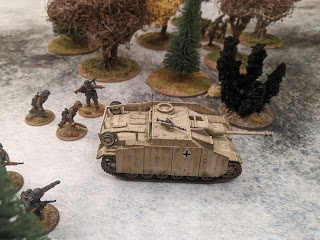 The British Cromwell comes up in support. 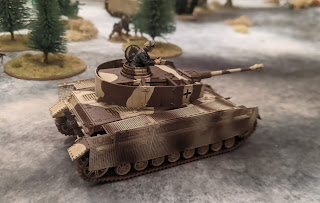 The Germans counter with a PzIV. 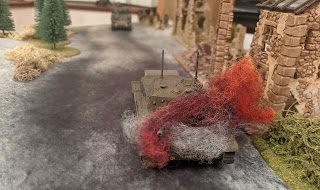 After a lengthy duel the Cromwell comes off worse, however the PzIVs ammunition is almost exhausted in the process. 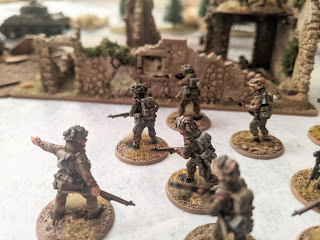 The Germans attempt a flanking move on the British left but are intercepted by British reinforcements and destroyed.

The Stug moves up in support of the PzIV although the Stug itself is low on ammunition, expending it on destroying the Vickers team. 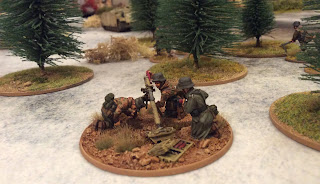 The German mortar support is less than satisfactory. 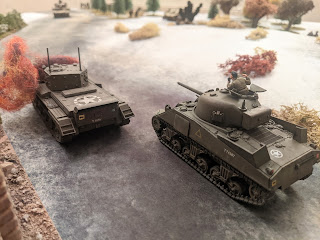 The British Sherman moves up. 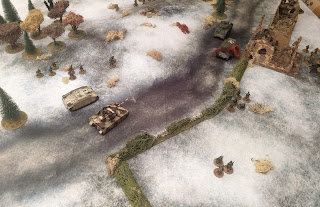 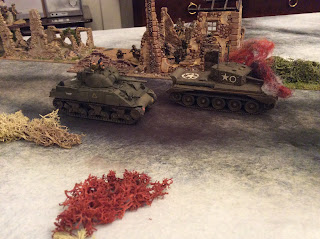 The Sherman engages the PzIV without much success. 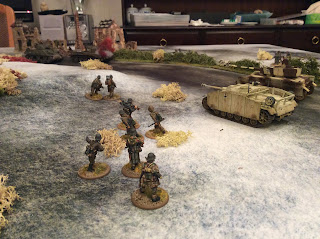 However it forces the PzIv to respond with similar results, it does exhaust its ammunition though. 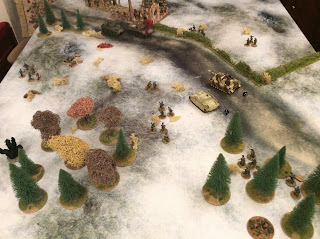 The problem when I roll for both sides is things rarely get hit so 00.30 soon arrived, time to assess the situation.
The British had lost the Cromwell and the Vickers team, with a reserve section still to come up and only having lost a third of its Battle Rating was still in pretty good shape.
The Germans had only lost a full squad and a Panzerschrek team, however the PzIv was out of ammo the Stug had one round of fire left and four infantry units were pinned, their Battle Rating only had a third remaining.
It was evident that the Germans were not really in a position to carry on with its remit so I decided it would withdraw.
I think the mat really looks the part and I think from the photos most will concur.
Next Tuesday it will be over to GHQ again when Don Baldini will once again fight for control of Howardsville.
TTFN and KBO
Posted by Phil Robinson at 14:34 18 comments:
Email ThisBlogThis!Share to TwitterShare to FacebookShare to Pinterest
Labels: Battlegroup, Games, World War II

With the latest B and C dictate my wife is working at home full time again, as she needs the dining table to work on games at OHQ have been curtailed for the time being. Having recently taken delivery of my Geek Villain winter mat I am determined to see it used before the new year. A solo outing is in order, also practice for when after our "fictional" Christmas parties are done and dusted we will no doubt be put in lockdown again, double, triple jabs notwithstanding.

I will post a report in due course, in the meantime a picture of said mat ready for battle follows. 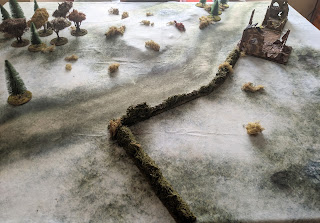 Waiting For The Bus

Readers may recall that I had purchased the Roden Models Vomag with 8.8cm flak gun mount, here it is together with a couple of other additions to the 20mm WWII collection.

The Vomag is painted to represent one of the two that were in Budapest in 1945, I have recently learned that they had been refitted with gun shields. Perhaps this suggests they were used in a ground role? Either way this will most likely be used as set dressing or an aide memoir I have an off table 88 shot.

My other additions are a graveyard for Bikkelheim and a platoon HQ in greatcoats to go with my platoon in winter gear. The figures and the Vomag crew are from ABFigures, the grave stones and walls are from Anyscale Models, they also do the walls in 1/56th. 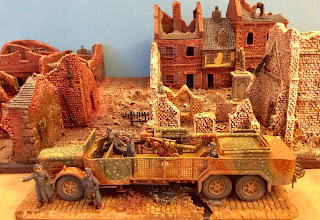 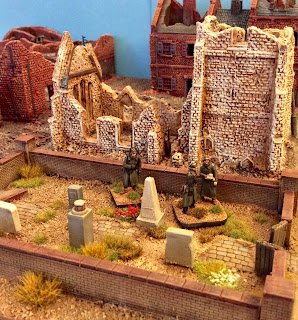