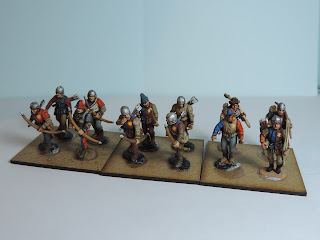 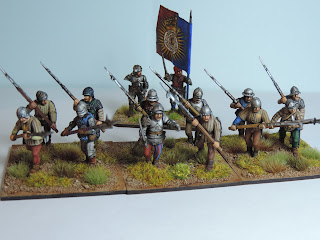 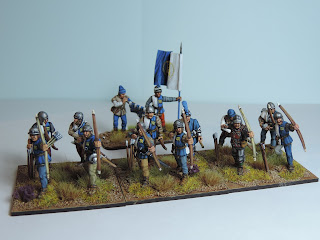 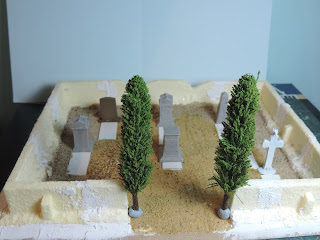 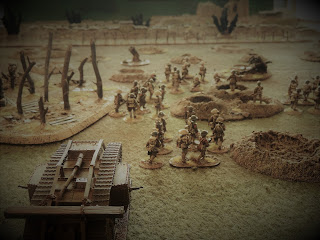 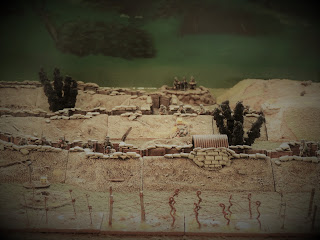 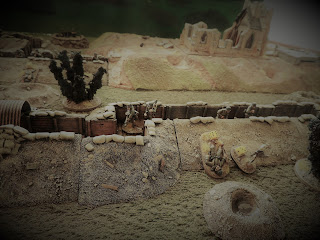 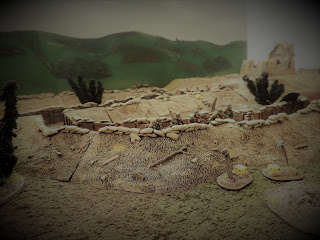 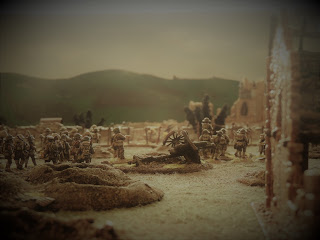 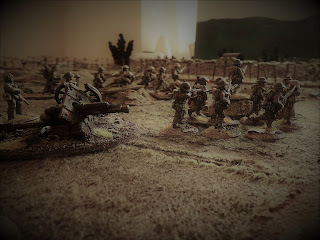 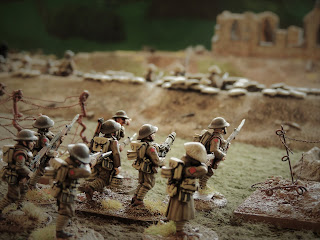 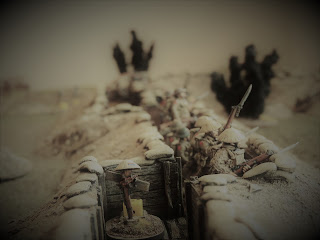 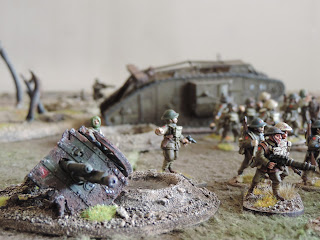 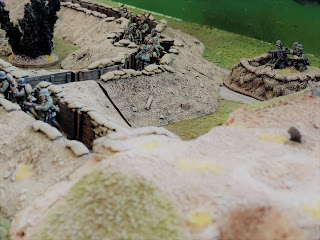 Posted by Phil Robinson at 12:07 14 comments:
Email ThisBlogThis!Share to TwitterShare to FacebookShare to Pinterest
Labels: Games, The Great War, Through The Blood And The Mud

We have held Church Hill for a long time, due to circumstances in adjoining sectors we must give up this position over which much blood has been spilt in the last few years, we will leave with both relief and regret. However we must continue to hold until our comrades have taken up our new positions to the rear, intelligence says that an assault by Tommy is imminent, so it appears more blood will be spilt before we leave, so sad, when will it all end?

For the action we will use a slightly modified Through The Blood And The Mud rules, my cards are marked up "Allied NCO and Allied Big Man 2" etc. this means that we can also use the card to activate a Big Man of our choosing rather than a specific one to give each player a little more control. However the Germans will start on blinds in the first turns until spotted or until the Big Man card with the relevant number equating to the number on the blinds is drawn, when the unit will dice for the effect of the Allied bombardment and then activate accordingly if applicable.
The Allies will deploy from three Deployment Points, these will be placed either six inches or twelve inches from the Allied base line dependant on an opposed dice roll and must be placed at least twelve inches apart. The Allies will not be on blinds but must be spotted as if they were.

Come back later to see how it all went or if you are on the FB Tabletop Wargames Network group check it out for some in action shots.

TTFN
Posted by Phil Robinson at 00:37 2 comments:
Email ThisBlogThis!Share to TwitterShare to FacebookShare to Pinterest
Labels: Games, The Great War, Through The Blood And The Mud

Today International Brigade commander Biklic lead the troops to a victory over the rebel forces holding the village of Rawnsla. The battalion aided by a newly arrived T26 and an armoured truck manned by their comrades in the militia, caught the rebel forces napping in a dawn attack.
The much vaunted Legion were in total disarray and caused few casualties on the attackers, yes my luck with the dice on home turf continues to allude me.
Below are some pics of the action, which we fought out using Rapid Fire rules with the Rompan El Fuego amendments, well those I remembered to use anyway. A fine game which rattled along to reach a conclusion in three hours including a break for lunch.

Empress Miniatures with the free figure from Partizan last month.

Next up will be MMG teams for both sides, I have had these since Nigel first started the range, so it's about time they were painted, don't you think?

No game this week, Dave is away. Next up will be another SCW game, but this time we will be using Rapid Fire plus the Rompan El Fuego amendments.