Dave came over to OHQ for the last game before his admission for his op on Star Wars day.
I had decided on a Spanish Civil war action to get my latest building on the table, we used Bolt Action rules, with the addition of a random card draw dice, six cards were drawn prior to the game, one for each turn, two neutral, two favouring the Republic and two favouring the Rebels. Two order dice were taken out of the bag for each side for the game to add further friction, other SCW specific rules were added courtesy of suggestions by Jim Hale and RJH Scales lists grabbed off the now defunct Warlord Forum.
The scenario came from the Bolt Action book, Hold Until Relieved. The objective was a bridge, to win the side must have an infantry unit within six inches of the centre and no enemy within six inches.
The cards drawn were.....
Turn one. Siesta Manana - The turn ended after the next order dice was drawn. This favoured neither side this early in proceedings.
Turn Two. Republican Friction - A Republican order dice is removed for that turn, only a slight irritation at this time.
Turn Three. Siesta - The turn ended - this was to have a greater effect on the Rebels later in the game as it left the Legion squads without any movement towards the bridge.
Turn Four. Viva La Republica - Any Republican Squad could make an additional advance or run order but could not fire or assault. This enabled to the Republicans to get their mortar up and into action a turn earlier, although this was to have no effect on the outcome.
Turn Five -  Republican Confusion - A Republican unit could have a down order put on it, the Rebels could not capitalise on this as all the relevant units had already taken an action.
Turn Six - Nationalist Ammo Low - This is played on a unit and it must return to the baseline to re-supply, this put the Rebel MMG out of the game, although it would need a turn seven for it to have any effect, if at all.
There follows a pictorial narrative of the action..............................................


With hindsight I should have deployed the Legion on the opposite side, the side I deployed on offered them cover on the approach but this hindered their advance and the turn end card compounded the problem, the Carlist Militia just could not hold out that long, so the bridge was lost.
Well that is all from OHQ for a while now until Dave recovers enough to travel, I will of course post on my painting progress when it does progress that is.

Finally completed this fine piece from Charlie Foxtrot Models the walls of the courtyard are from Empress Miniatures, Colin does some rather fine pantile walls now but I had these in stock. The bases are bespoke ones from Warbases to fit . 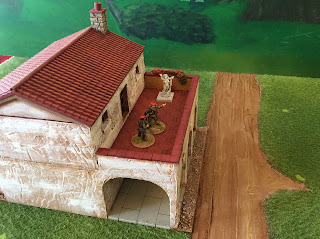 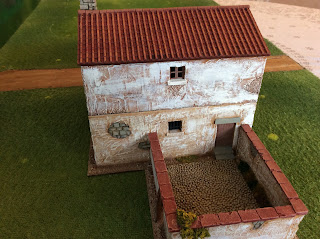 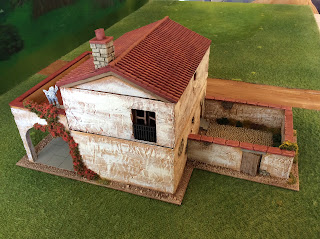 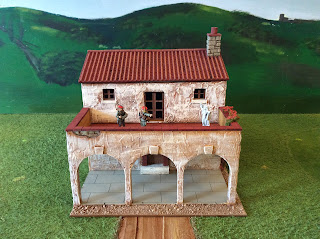 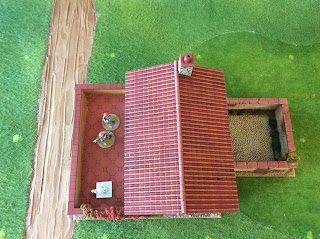 This will feature in our SCW game on Monday.

Despite a busy painting schedule I have managed to finish my pike unit for the joint project with Dave.
The figures are a mix of Perry plastics and metals on one of our bespoke bases from Warbases.
To aid the basing and painting process they wear based in ranks with the texturing and painting done before progressing to the next. 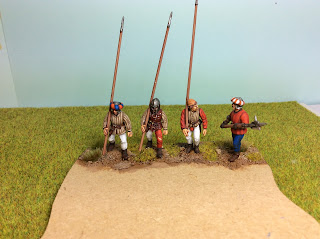 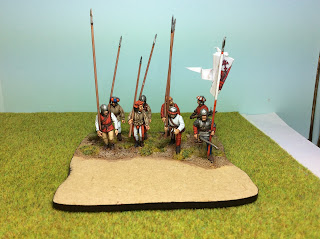 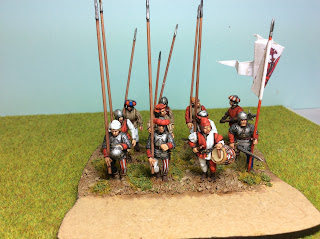 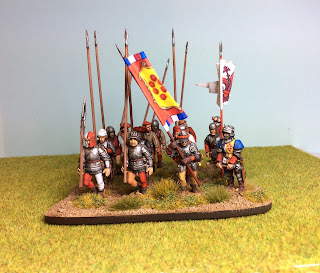 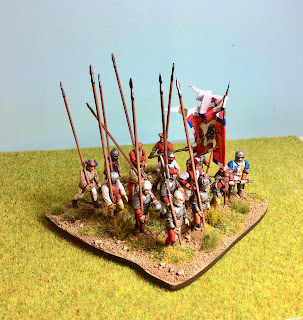 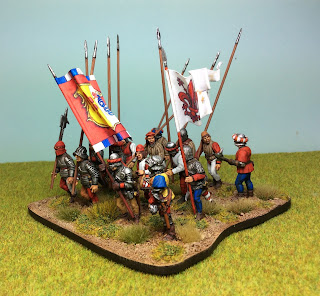 TTFN
Posted by Phil Robinson at 01:51 12 comments:
Email ThisBlogThis!Share to TwitterShare to FacebookShare to Pinterest
Labels: Painting, The Medici

Dave popped over to OHQ today, I chose a game of Chain of Command, I used scenario two, The Probe. To win the Soviet force had to move one team to the German base line, this meant that the Germans had to cover their entire front, at least initially to ascertain the direction of the Soviet attack. The Soviet thrust began on the left, the Germans countered this with two squads covering the road and the flank to the side of it, one squad was left off table to counter any Soviet threat on the right. They also left the panzerschrek team in reserve ready to counter any Soviet AFV, sure enough the Soviets sent a squad out on the right, although the main attack was going to be on the left this had to be countered by deploying the remaining German squad to head them off and stop them reaching the table edge. Two Soviet squads kept the Germans under fire on the left and centre left, they eventually brought up a SU76 in support. The German squad on the left was eventually broken, emboldened by this the SU76 ventured in to sight of the corn field, the Germans had a full Chain of Command dice, now was the time to deploy the panzerschrek, AMBUSH! and KABOOM! the SU76 with four net hits went up in a ball of smoke. Meanwhile the Soviet squad over on the right made a bold move upon the Germans entrenched their, but the firepower of the MG42 and rifle team broke their advance, this and the loss of the SU76 saw the Soviet morale start to plummet. With the Germans in the corn field now gone and the German squad in the woods occupied and the other over on the right, now they made a dash for they base line. They were now hindered by being down to three command dice and the Germans were able to get their squad over from the right before they could make it and a sharp melee ensued with the German numbers carrying the day and reducing the Soviet force morale down to 0.
It was a close run thing with the German squad on the right unable to get the message to transfer to the left flank straight away, with a better force morale and more command dice the Soviets could of won, a close run thing.
Not many pics I'm afraid, get so wrapped up in the game these days.

Not a lot on the Home Front at the moment, but to keep the blog ticking over here is a Warlord Panzer IV H I have painted as part of a commission. 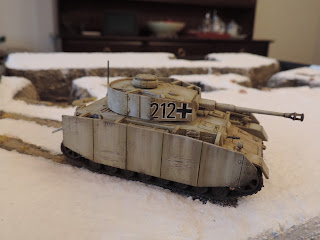 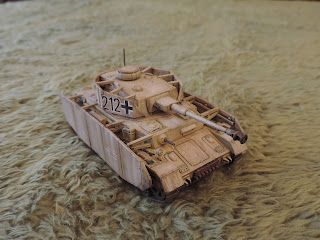 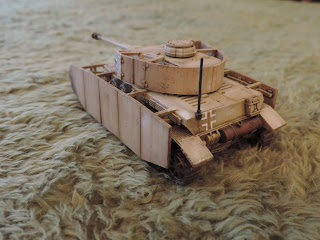 The kit went together very well, although the turret schurzen was a tad fiddly to line up, painted with Mig Ammo in the main, with weathering products from the same and AK Interactive.