Some recent additions to the collections.

Having recently added some AB volksgrenadiers with Stg44s to my 1945 Germans I thought it only fair the humble rifle and LMG teams should also get some cold weather wear. While I was on I dug out these AB officer types, I bought them at one of the York shows, Tony actually served me that's how long a go it was. 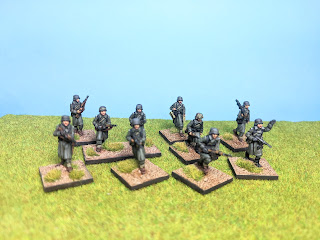 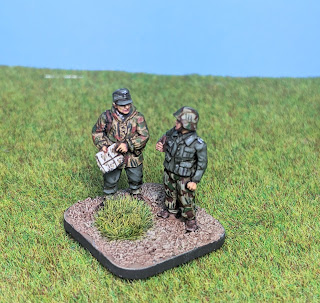 Now I have plenty of Russian infantry and don't really need more but the AB Russians are so tempting I thought that adding more scouts from the range would cure me. For a while it did, then Tony goes and adds more packs, in particular one entitled Soviet Heroes. One is waving a Soviet flag, now I don't have a figure like that, what other excuse did I need? 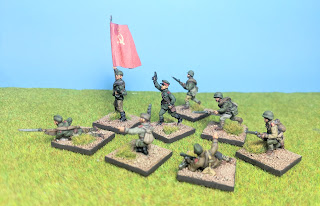 Lastly I have added these rather nice Aventine archers to the sixth century Roman collection, no prizes for spotting the Smurf by the way, colour scheme inspired by Jonathan's Sea Peoples 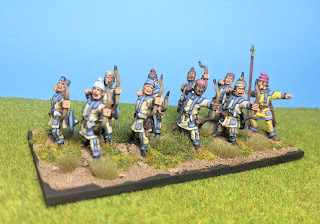 Until next time have a care and KBO.

The British have recently captured Monument Hill, with its commanding view of the surrounding area the Germans are determined to take it back, it is currently thinly occupied by a British platoon HQ, a PIAT team, sniper and dug in using the old German OP a Vickers MMG team, they will get support later from the platoon rifle sections, 50mm mortar team and a Cromwell IV.

Tasked with ousting the British is Sturm Group Hansdersen, a Volksgrenadier platoon supported by a Panzer IV ausf J. 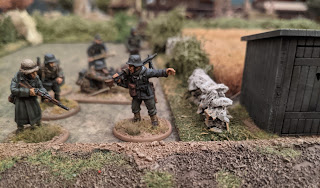 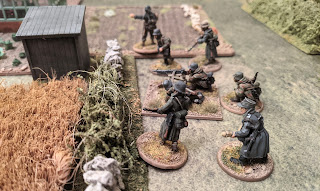 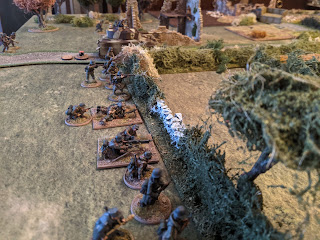 The Germans began their initial advance with the platoon rifle teams, supported by a tripod mounted MG42 with support from the Pz IV. 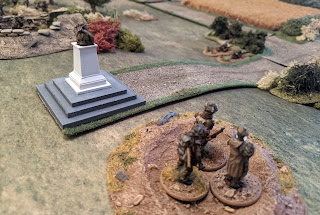 The British platoon HQ tried in vain to contact the off table 4.2" mortar battery, the rest of the platoon would not be up until turn four, damn that 38 radio set. 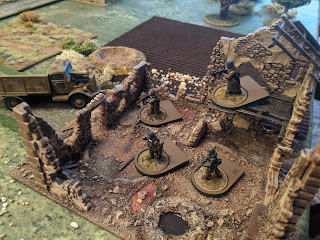 The British sniper is quickly ousted from his position by the German sturmgewehr squad. 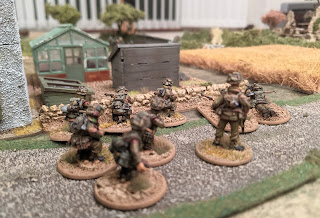 British support begins to arrive, the German advance as been slow the Vickers and eventual mortar stonk pinning several units. 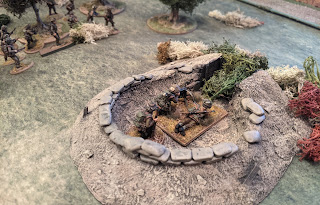 It was not all one way traffic with the British having to rally under fire units too. 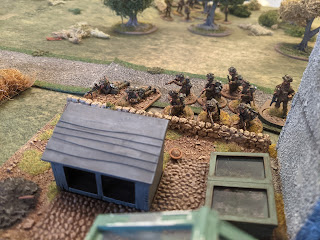 the advantage seemed to be going to and thro, but then the Luftwaffe turned up to show it still had some bite, despite AA fire using rifles and Brens the Stuka put paid to both the PIAT and 50mm mortar teams, the British battle rating started to take a pounding. 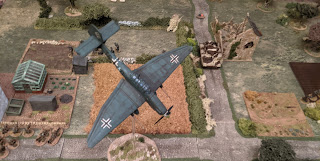 Against their better the judgement with the PIAT team taken out and the PzIV surviving the draw of a confusion counter, the Cromwell was sent forward to engage it. 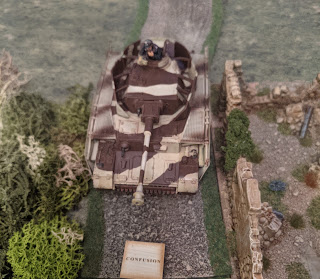 The Cromwell crested the the hill and took a shot, a miss! would it pay for this act of bravado? 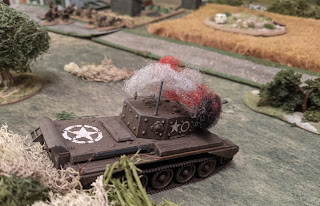 Of course, return fire from the PzIV and KABOOM!
It was all too much with their battle rating exceeded the British relinquished their hold on Monument Hill.
All in all a fabulous couple of hours, I think George enjoyed it with the added bonus of a win.
Until next time take care and KBO ( we seem to be getting there )