The Bells Of Hell.

Back to Bolt Action for this Great War encounter, it is late 1918 the Hun are on the run, or are they?
This would a green fields beyond game, I chose a scenario from the Bolt Action 2nd. edition rulebook, Point Defence.
The only change I made was that tanks must enter on the road and can only react to events that are directly to their front or in view of the force commander who must be within six inches of the vehicle.
There was no preliminary bombardment, for once my perchance for rolling ones was in my favour as I took command of the Germans.
The road on the British side was on their left flank so Dave decided to concentrate is attack on that flank, spearheaded by the Mark IV and an assault group of tough fighters. The way the three objectives are spaced out in the scenario really compels the defender to deploy on a broad front, even doing this with the force on hand one was always going to be a struggle to defend.

When the British second wave came on, Dave sent the two rifle sections with grenade launchers to engage the Germans in the centre, whilst another Lewis gun section was sent in support of the Mark IV and assault group.
The German reserves were a little tardy in their arrival, giving the British time to envelope the flank. The Germans only really had the A7V to counter the Mark IV, but it would have taken too long for it to get the order to turn around and advance to engage it.

We got half way through turn five, by then it seemed obvious that the British, having gained the one objective were not going to get another one needed for a win and the Germans were not going to capture the one gained back.
Maybe with a turn seven the British could gain the objective, we diced early, a two so no turn seven. We decided to end the game there, a draw. Reflecting on the scenario afterwards we could not see how the defenders could win and similarly it looked highly unlikely that the attackers could win in the six turns either.
Have you played it and got a win?
If you follow Dave's blog you will see that he as being going at the Italian Wars project like the Titfield Thunderbolt, meanwhile in line with the Medici adage "slowly with haste" I am going at a more sedate rate, but here is my fourth base for the project, I also have eleven figures finished for the pike unit. 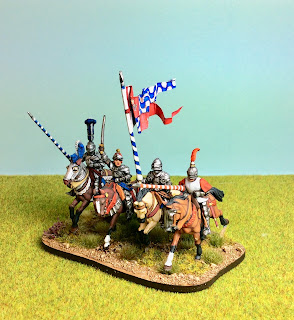 No game next week with the Easter holiday and with Dave's hip op in the offing all being well the next game the following week at GHQ will be my last for a while. 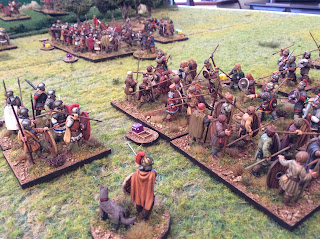 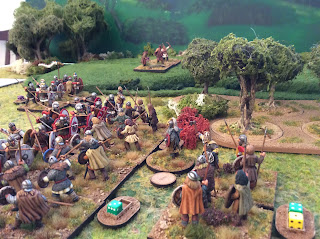 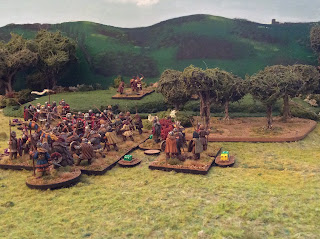 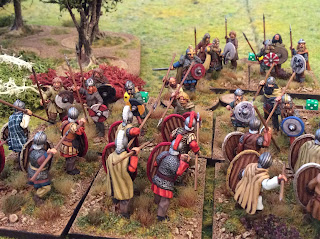 Today we had a little extra playing time so I decided to give Chain of Command a try with the Spanish Civil War lists compiled by Jim Hale and Rolf Grein.
I had to use some Falange to bolster the Legion numbers, Spanish platoons are huge, it makes handling them a tad difficult too, well for me anyway.
It was an epic struggle with Comrade Dave's forces finally winning the day, although, had the game been part of a campaign I would probably have withdrawn earlier in proceedings. With hindsight knowing that the Republic could have bought, and did, a T26 to the party I should have left the Panzer 1 back at base, where it appears the anti-tank gun team decided to stay until it had to be deployed in a less than satisfactory way, but needs must and had it hit the T26 things may have been different. The what ifs of war eh.
Too engrossed in the game again to get many pictures, but here in no particular order are the few I took.

Dave has the decorators in so the next game will be at OHQ again, a Dark Ages set to is in order I think.