It's has been a while but I have finally completed some figures of my own, another base of condottiere for the joint project with Dave. Next up a halberdier unit, though it may be a while coming........ 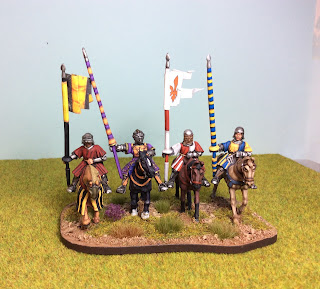 Figures are The Assault Group and Foundry, flags from Pete's Flags and the Perry plastic knights box.

TTFN
Posted by Phil Robinson at 13:57 14 comments:
Email ThisBlogThis!Share to TwitterShare to FacebookShare to Pinterest
Labels: Painting, The Medici

Jon came over to OHQ for a game last night, I chose a Battlegroup Fall of the Reich game using the scenario from WSS issue 96.
I had not played a BG game in over a year and Jon even longer, however by turn two we are both more or less in the swing of it again.
When I perused the opposing forces I thought the game would be a walk over for the Russians, the reality was to be otherwise, I think I underestimated the value of the extensive German trenches, a very close game ensued, with lady luck aiding and deserting both sides in equal measure too.
When close of play came the Russians had not achieved their objective and were one, two at most chit draws from breaking off the assault and withdrawing, whilst the vastly depleted Germans were still in fine fettle with ten BR points away, a real backs to the wall performance from the Volksgrenadiers. We thought that if play continued the Russians would reach their BR before they could wipe out the last surviving Volksgrenadiers, so a win was awarded to the Germans.
The big open space on the table did not make for great photo opportunities, but here are a few for a flavour of the action.

Back to GHQ next week where Baldinus and Pompous will again battle for control of the empire.

Of Pike And Plate

Today over at GHQ we had our inaugural Italalian Wars game, combining our painted units to make up two equalish protagonists. We used Neil Thomas’s Pike and Shot rules with a smattering of his Medieval rules.
I was too much concentrating on the rules etc. to take much notice of my defeat at the hands of the debauched Borgias, Dave will no doubt be along over on the Tales From GHQ blog with all the gory details, in the meantime some pictures from the game to give you a taster. 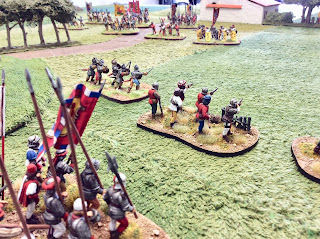 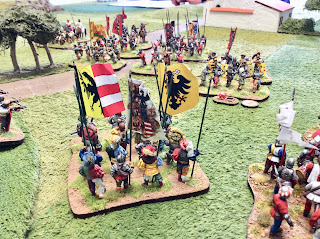 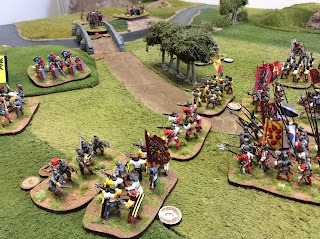 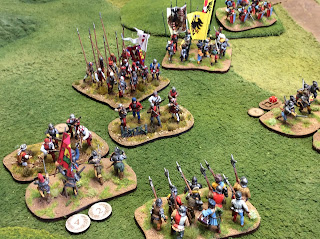 If all goes according to plan next up at OHQ will be a Battlegroup, Fall of the Reich game.