Introducing "Bertie" my MkIV from the Great War Miniatures range. Painted with a base coat of Vallejo English Uniform then over sprayed with Vallejo Panzer Aces British Tanker, washed with Citadel Agrax Earthshade then after a matt varnish a Mig filter was applied before dry brushing. The tracks were painted with a mix of Vallejo black brown and German grey, then dry brushed with German grey with silver grey added. The exhaust was first painted with black brown with a little bicarbonate of soda mixed in to give it a rough texture it was then dry brushed with rust brown mix, finally Bertie was dry brushed with Citadel Graveyard Earth which I use for my bases. 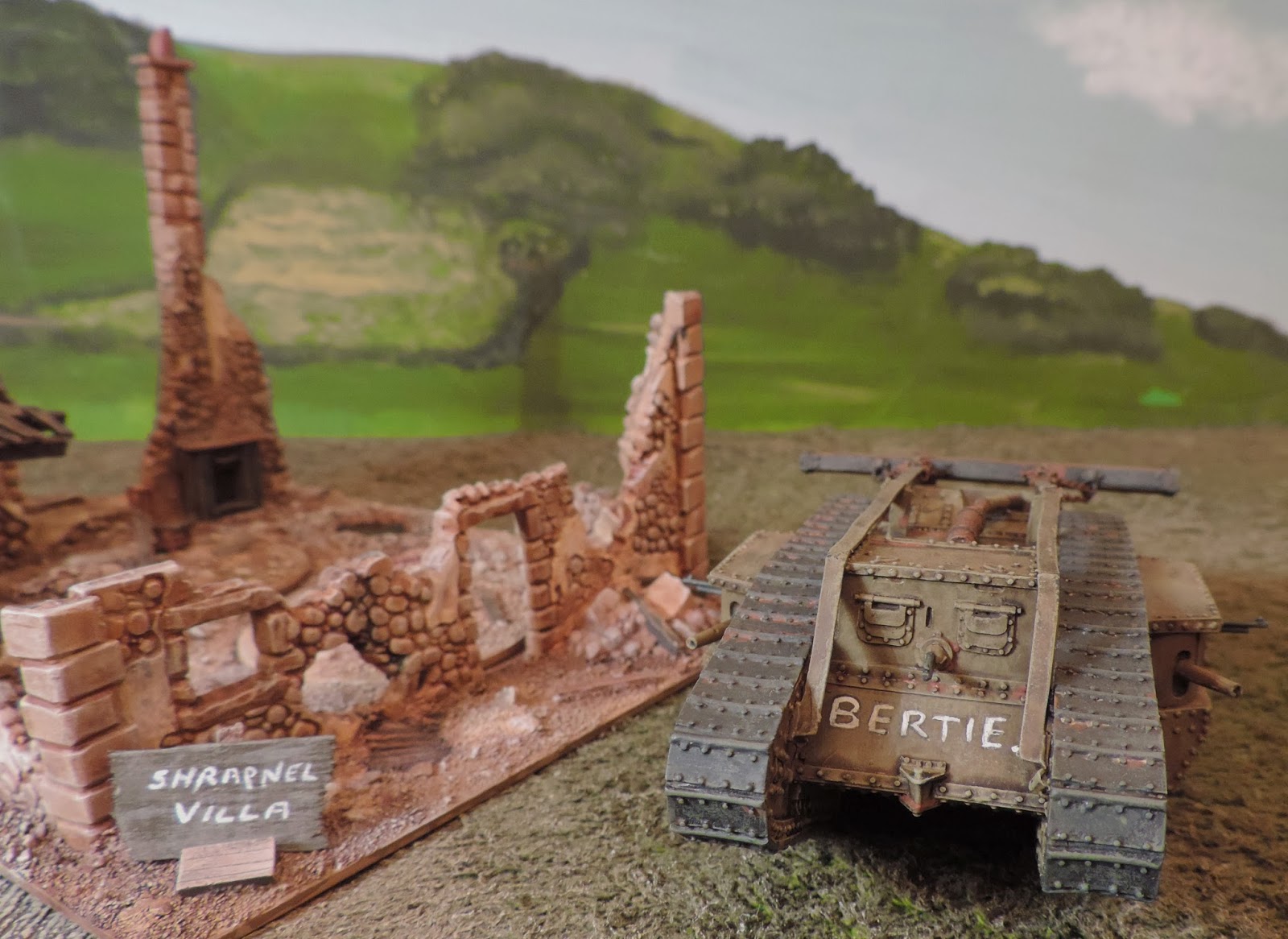 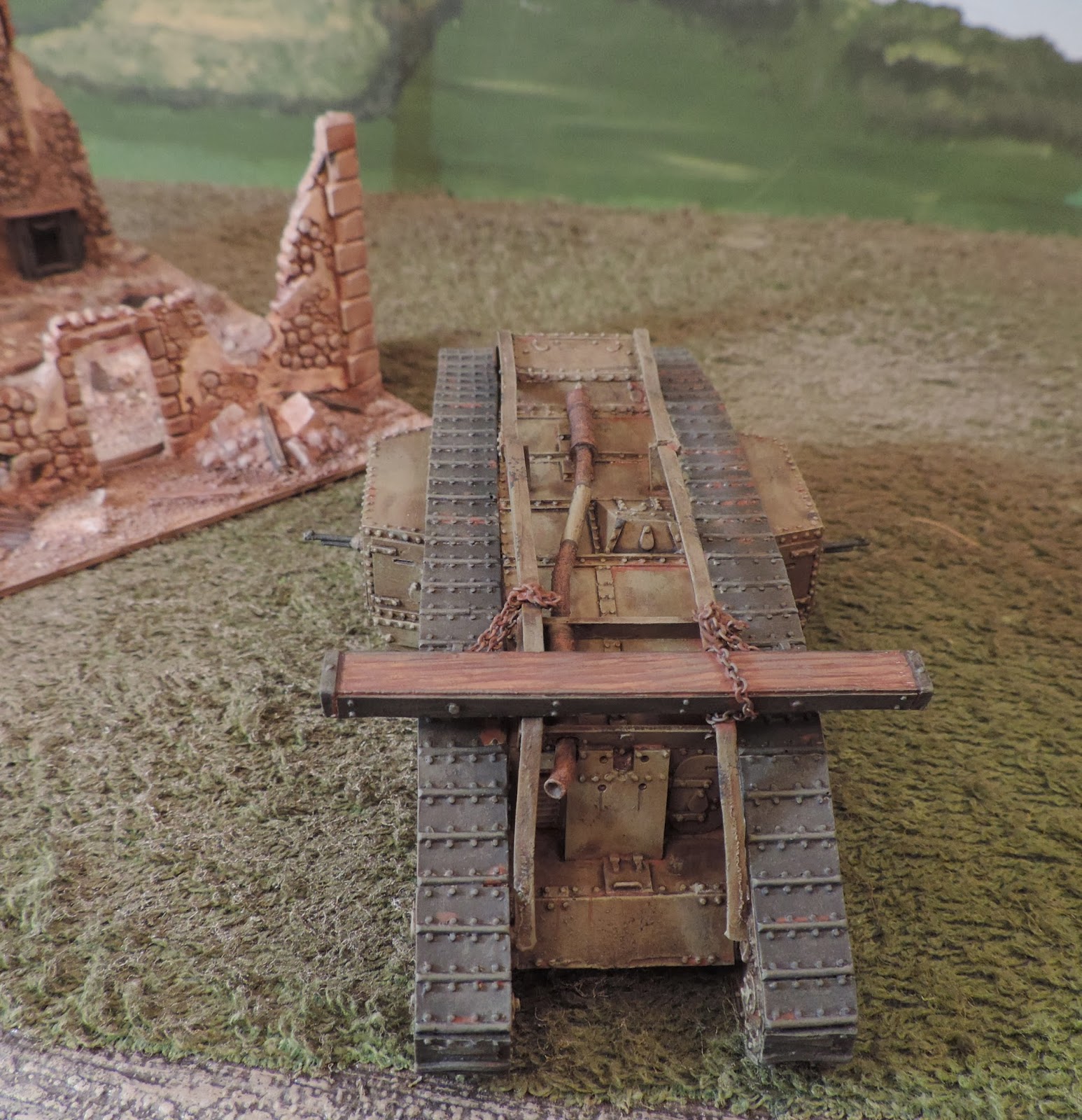 ﻿
Posted by Phil Robinson at 16:23 5 comments:
Email ThisBlogThis!Share to TwitterShare to FacebookShare to Pinterest
Labels: Painting, The Great War

I have now finished painting Shrapnel Villa, pictures of this "Des Res" are below, I have also finished my Great War Miniatures MkIV tank. I will try to take some pics before I go up to York for the weekend and a visit to Vapnartak, no shopping list to date, although I have ordered some bases for my A7V and the MkIV off the ever obliging Martin at Warbases and a copy of Donnybrook which Barry is bringing down for me to collect at the show. Anyway enough of my wittering here are the pics of Shrapnel Villa. 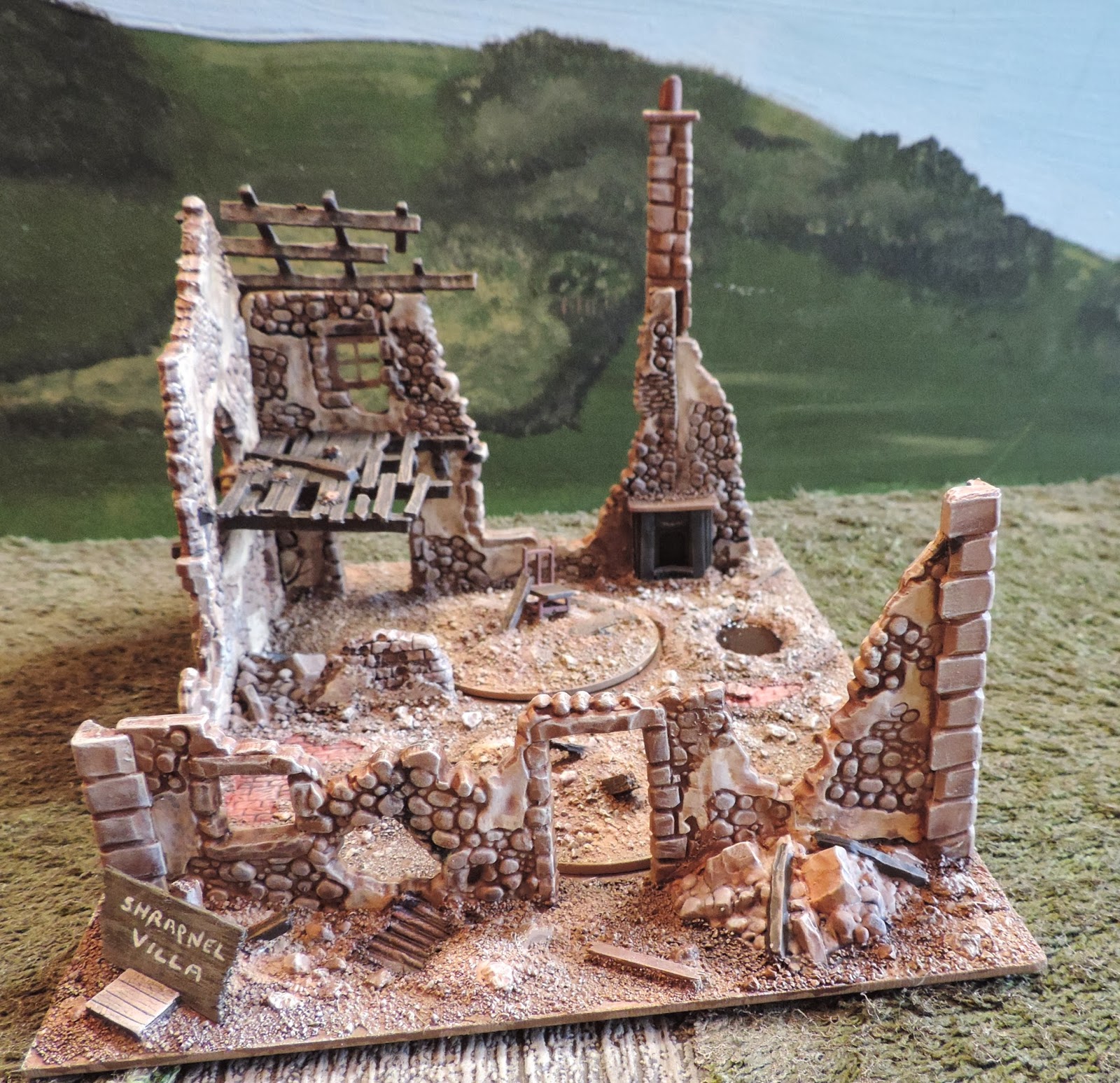 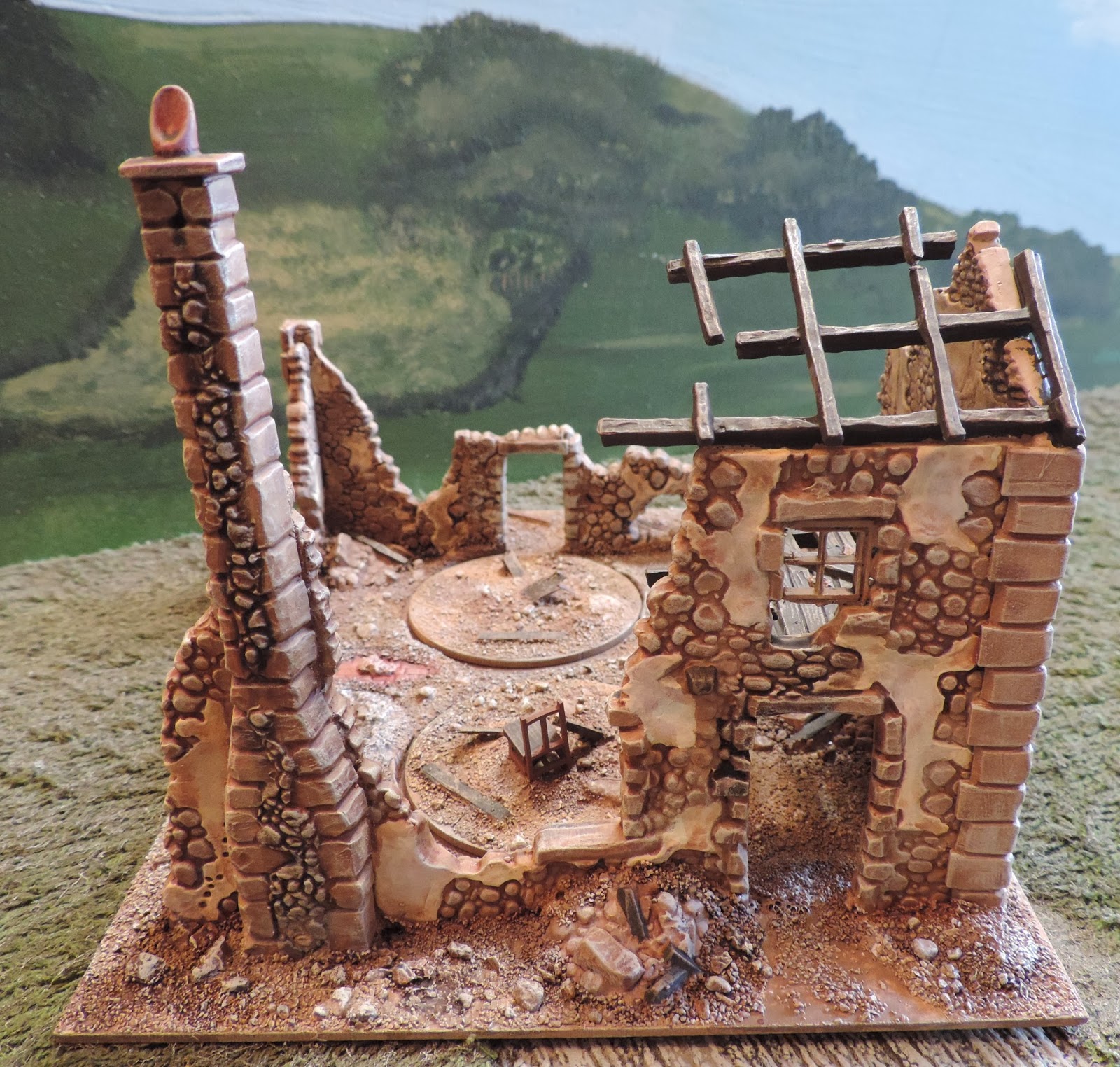 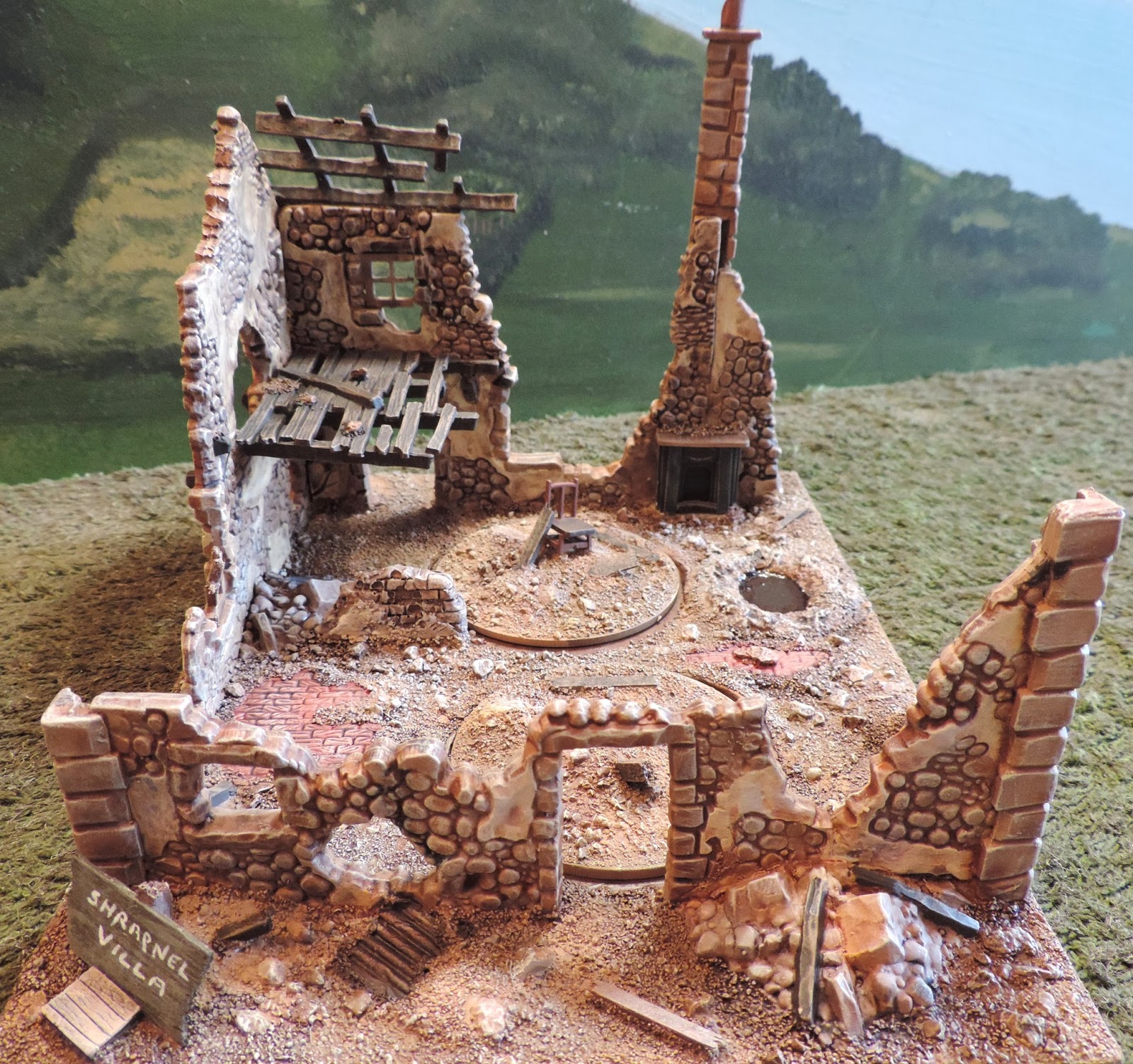 Blunders on the Bland

I made the trip over to GHQ for the WWII Bolt Action game earlier today, I commanded the British who were tasked with recapturing a bridge taken by German parachutists the previous day whilst the local British forces were otherwise engaged. Things started well with the heroic Home Guard units diverting the German attention from the bridge whilst the regulars made their way to assault the bridge. Despite their stirling efforts their inexperience began to show when surviving earlier mortar fire the German gunners  found their mark and they were subsequently decimated by concentrated mortar fire. The attack on the bridge was developing nicely too, unfortunately the tank commander turned out to be a windy sort and halted his advance when he spotted the Germans deploying an anti-tank rifle, refusing to advance until it was dealt with. With the Home Guard units all but destroyed and the loss of the tank, set on fire by assaulting German jagers together with the regular units depleted by MMG and rifle fire the attack was called off.
A splendid few hours gaming with a break for lunch and a chat in splendid company what more can a chap ask for on his day off from painting?
Below are some pics taken by the Blanding Bugles intrepid photographer John Bailey, for more pics in glorious technicolour and a more detailed report of this and the previous action please visit Dave's blog

This weeks game will be over at GHQ, a Bolt Action WWII affair, Dave will no doubt give all the detail on his blog in due course. No game next week, we are all off to York for Vapnartak, we will again be making a weekend of it with the women folk, I wonder if we will get snow for a third year?

I have finally got around to putting paint on Shrapnel Villa, I have also made a start on finishing off my Back of Beyond Chinese Warlord force and three remaining figures for my Bolshevik forces, then it will be full steam ahead on completing my Germans for 1914, with the exception of any staff, Great War Miniatures are yet to make any and Renegade have ceased trading for the time being, else I may have utilised some of their officer types. I am also basing more figures for Dux when these are done I will take a photo of the forces to date.

In the meantime here are some Front Rank War of the Spanish Succession Hesse-Cassel cavalry, no flag the customer will be adding this. 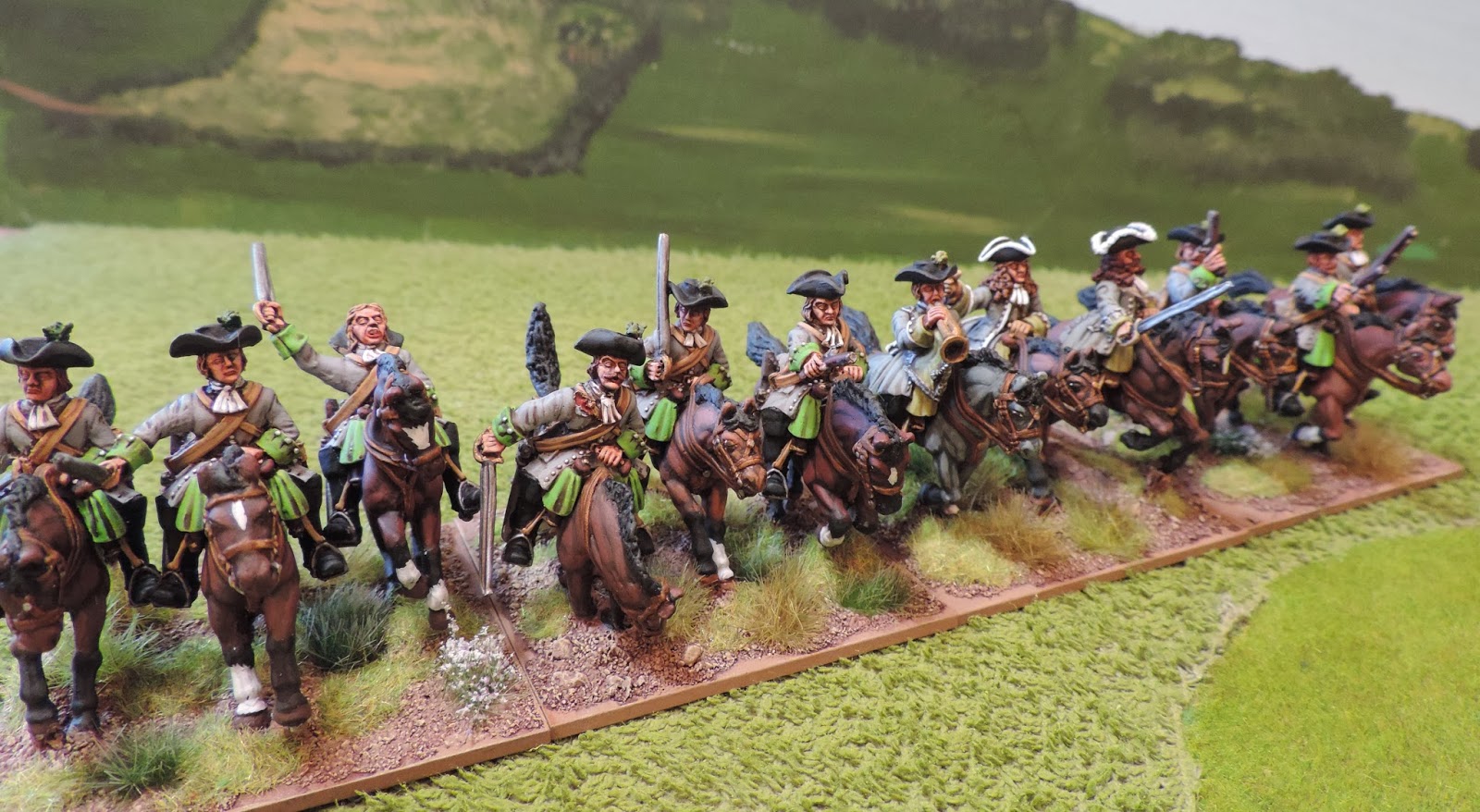 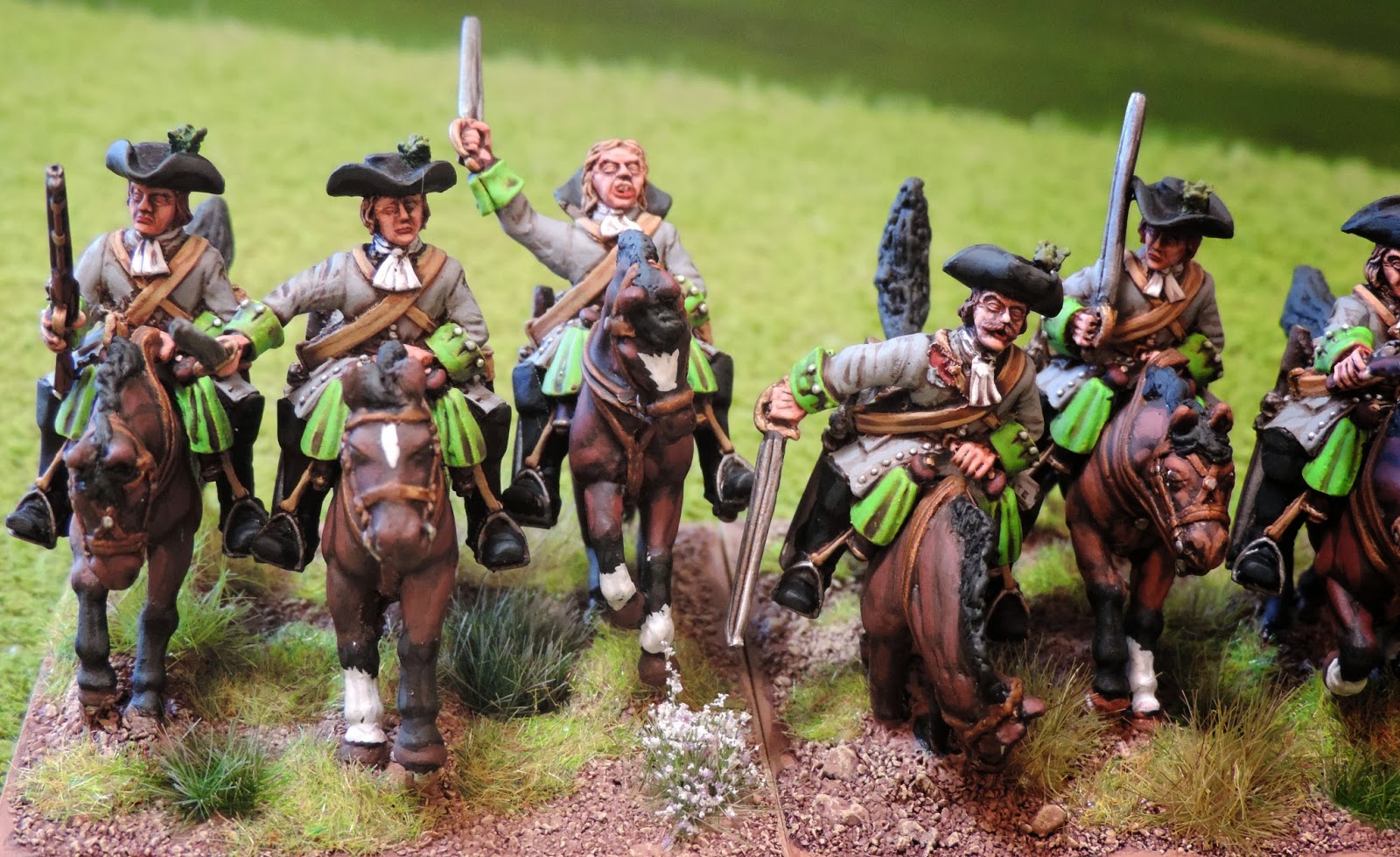 The Demon Dog Of Deptford

Wanting a change after painting uniforms all day, I painted up this little chappie for our forthcoming Victorian Pulp/Horror games over at GHQ, Dave has quite a few figures painted up already and is now working on the terrain tiles as and when he receives the building parts. The figure is a Darkson Designs AEWWII werewolf, the base I did myself using the Cubs Cobbles Method 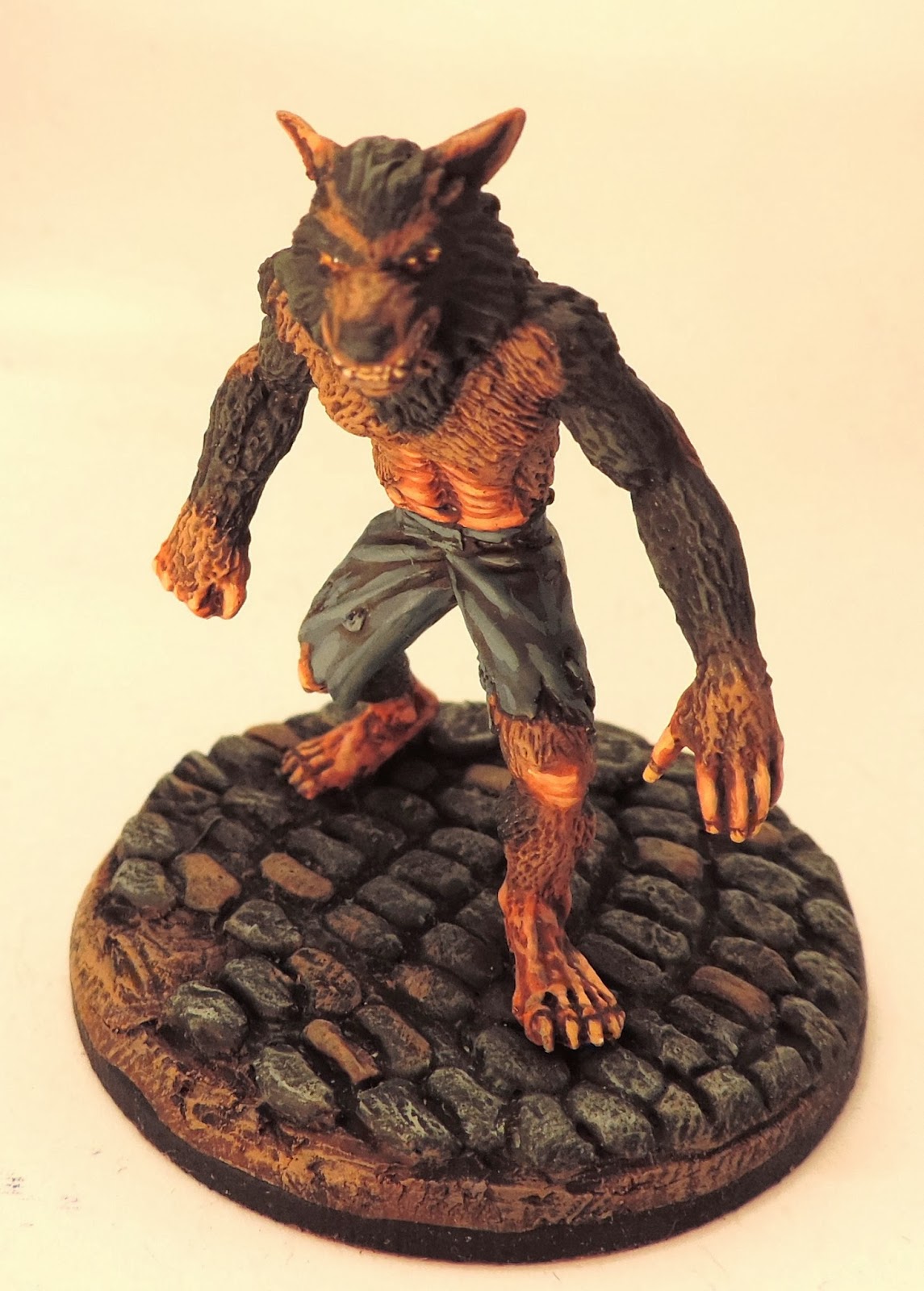 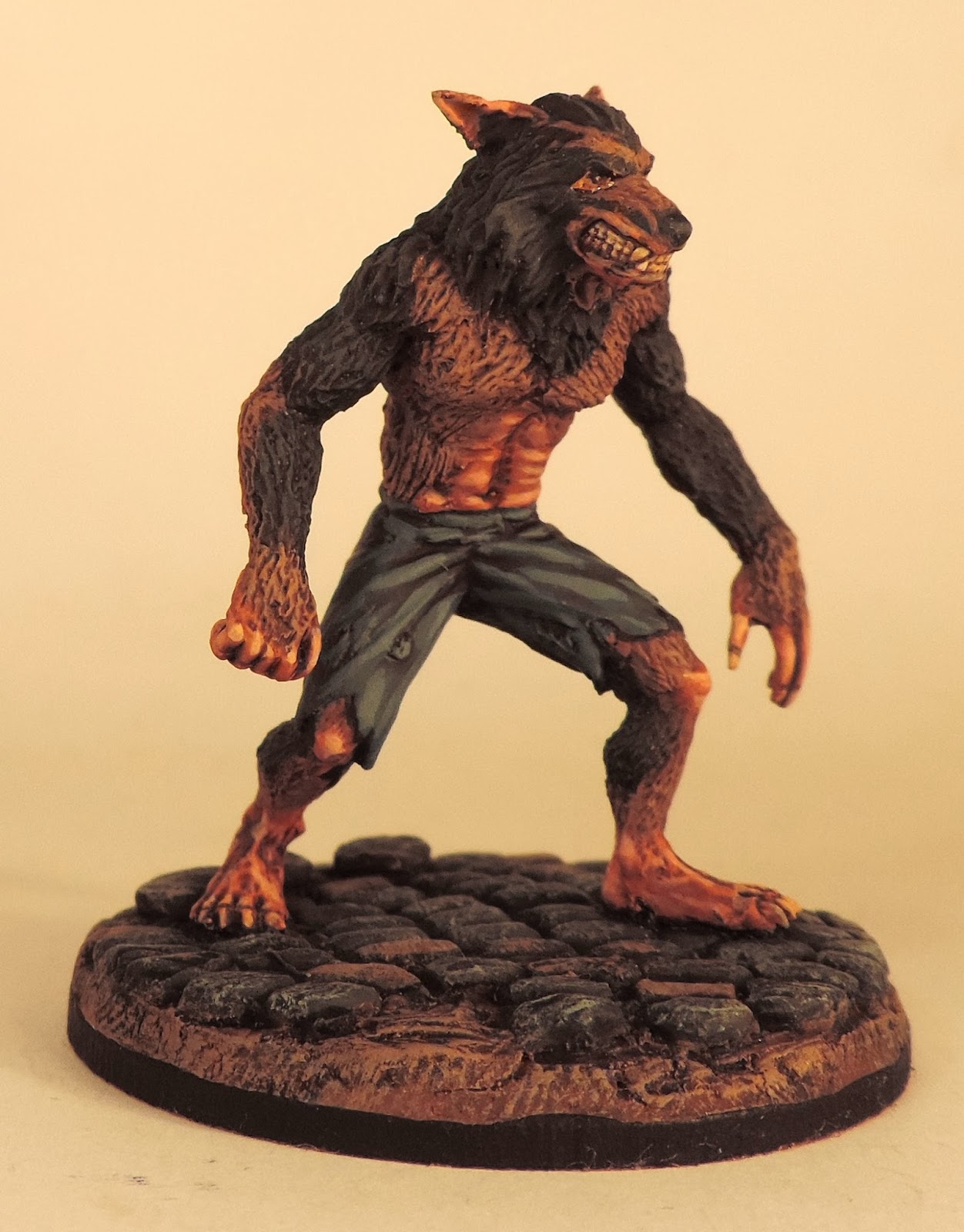 With the need to get my Spanish Civil War figures out to see how many more I need to paint for a game using Chain of Command and the news that Dave might be running late for the game I decided to do a SCW game using Bolt Action instead of the planned WWII game. We used the patrol phase from CoC to get troops on the table and the Bolt Action rules we used as written. Dave took command of the Nationalists for a change, these consisted of a squad of Foreign Legion with tank support together with the support of two Carlist Militia squads and a Falange squad. I commanded the Republican force of two International Brigade squads, supported by an anti-tank gun and two Anarchist Militia squads.
﻿﻿﻿﻿﻿﻿ ﻿﻿﻿﻿﻿﻿

All in all a game of one half, the patrol phase ended even really, however with the Nationalist dice coming out in succession in the first turn they were able to deploy into good firing positions before the Republicans could reply, couple this with some atrocious dice throwing through out a Republican defeat was inevitable. All in all an enjoyable game, now to get some more figures cleaned and primed ready for painting and a bit of CoC.

I have started a new blog to record the goings on in our fictional 1920's country of Rhanzlistan,

Here you find the true version of events from our occasional games set there, for a less than truthfull account of what transpires there you can of course visit the Imperialist propaganda blog

A picture from todays game over at GHQ

Posted by Phil Robinson at 16:16 1 comment:
Email ThisBlogThis!Share to TwitterShare to FacebookShare to Pinterest
Labels: Back of Beyond, Games

When they first came out I purchased a Great War Miniatures A7V and a Mk. IV tank, when was that? 4 or 5 years ago or longer? Either way I decided it was high time to get them assembled and painted, first up is the A7V, which I decided to Christen "Elfriede" after my daughters doberman puppy.

When I dug out my book on the A7V it turns out there was an actual "Elfriede", it was tank number 542 and served with the second abteilung. On the 24th April 1918, 542 tipped up in a sand pit, its commander Leutnant Stein was killed defending the tank, it remained in no-man's-land until 15th May 1918 when it was reached by soldiers of the 37th (Moroccan) Division and recovered with help of A Company of the British 1st Tank battalion, after being towed behind the lines it was made mobile again and went through various tests, after which it was put on display in the Place de la Concorde in Paris, it was scrapped in 1919.

My "Elfiriede" was sprayed with Halfords grey primer, I then over sprayed it with Vallejo Mahogany brown and Green Ochre blotches, then I gave it a wash of Games Workshop Agrax Earthshade. I then gave it a matt varnish and applied crosses to the sides and rear and added a skull and crossbones to the front, these were left overs from air plane kits, the actual "Elfriede" had a cross on the front, but you have to have a skull n an A7V don't you? The transfers were then coated with matt varnish before I applied a MIG filter, when this was dry the vehicle was drybrushed with lighter shades of the original colours, paint chips added using Vallejo German Grey applied with teared up sponge and various dirt and rust streaks added with GW Nuln Oil and a mixed red brown rust colour using various Vallejo shades. The tracks were painted a very dark brown and drybrushed German grey and the lower areas drybrushed with GW Graveyard Earth (now Steal Legion Drab) to match my figure bases, the name is painted freehand, I then gave it a finally coat of matt varnish.

Painting of my Mark IV is underway and will appear in due course, in the meantime here are some shots of "Elfriede" 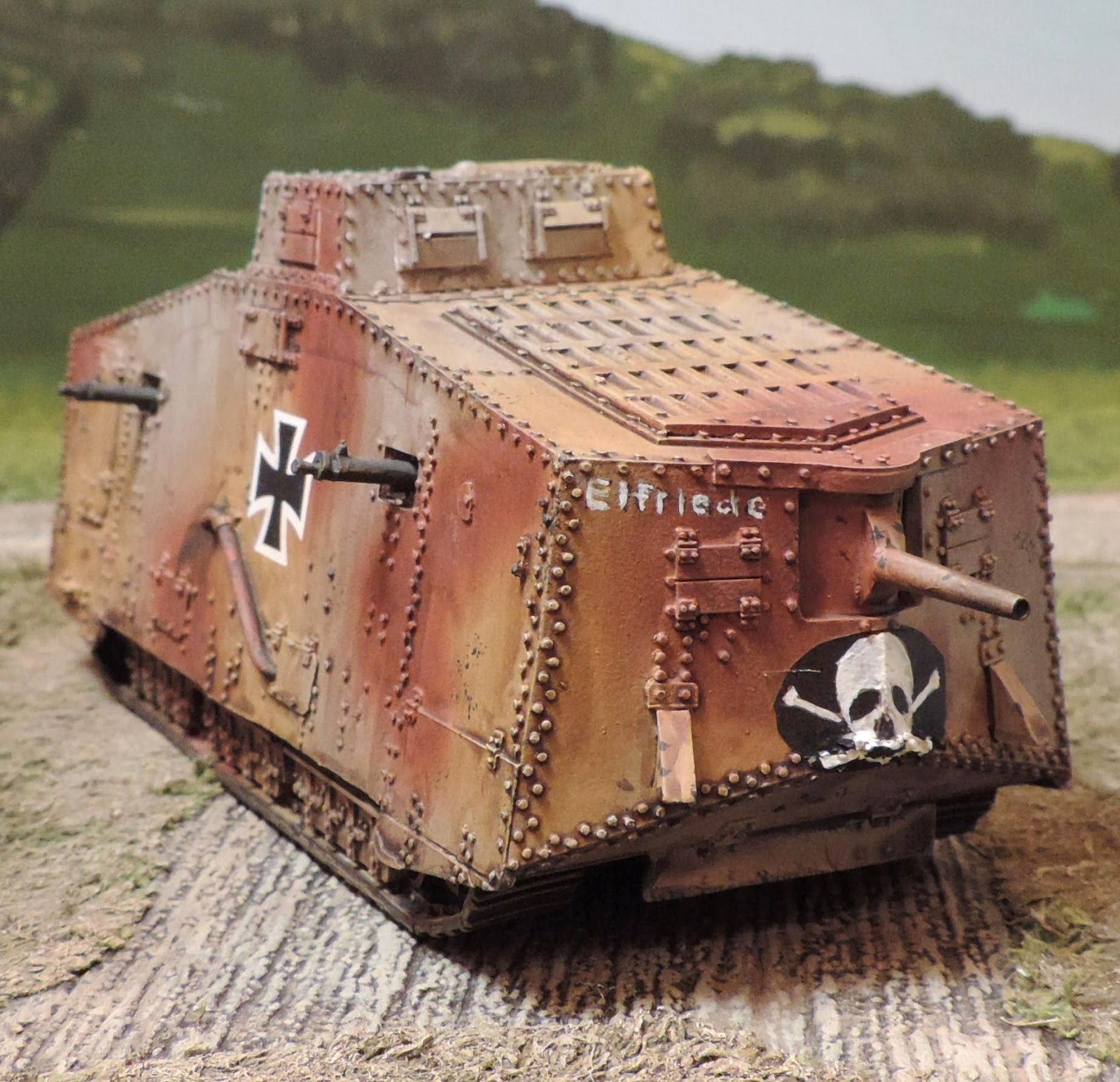 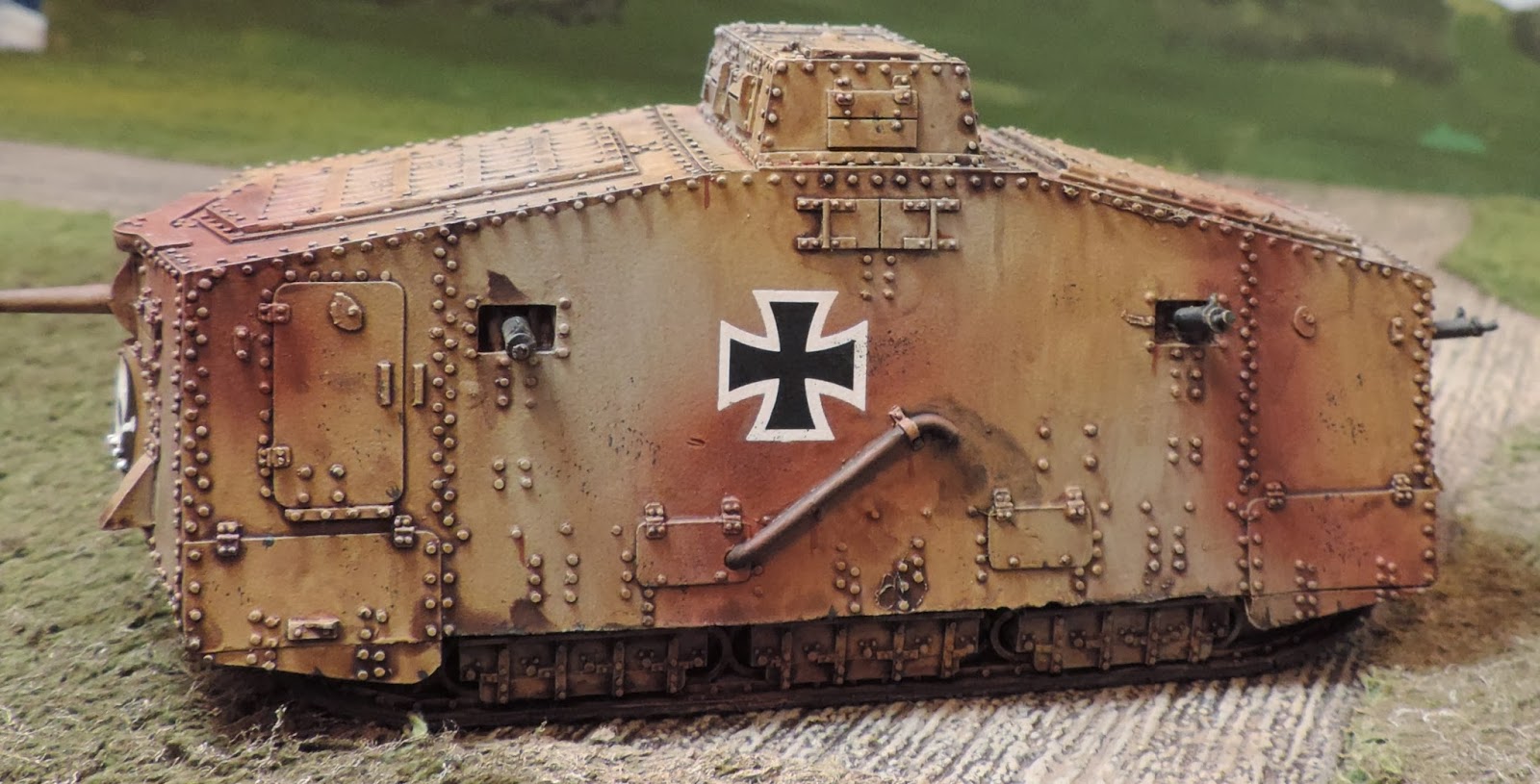 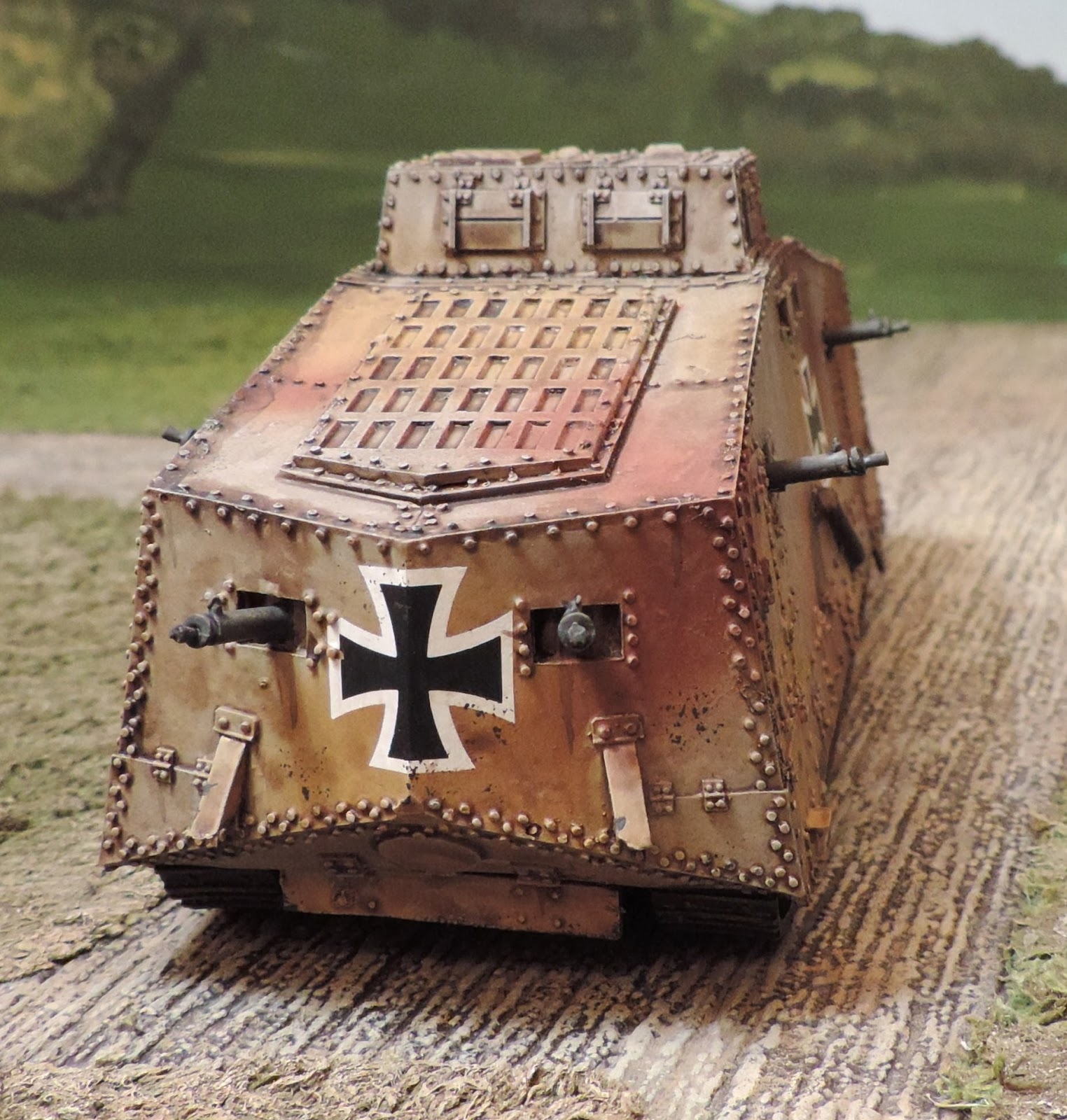 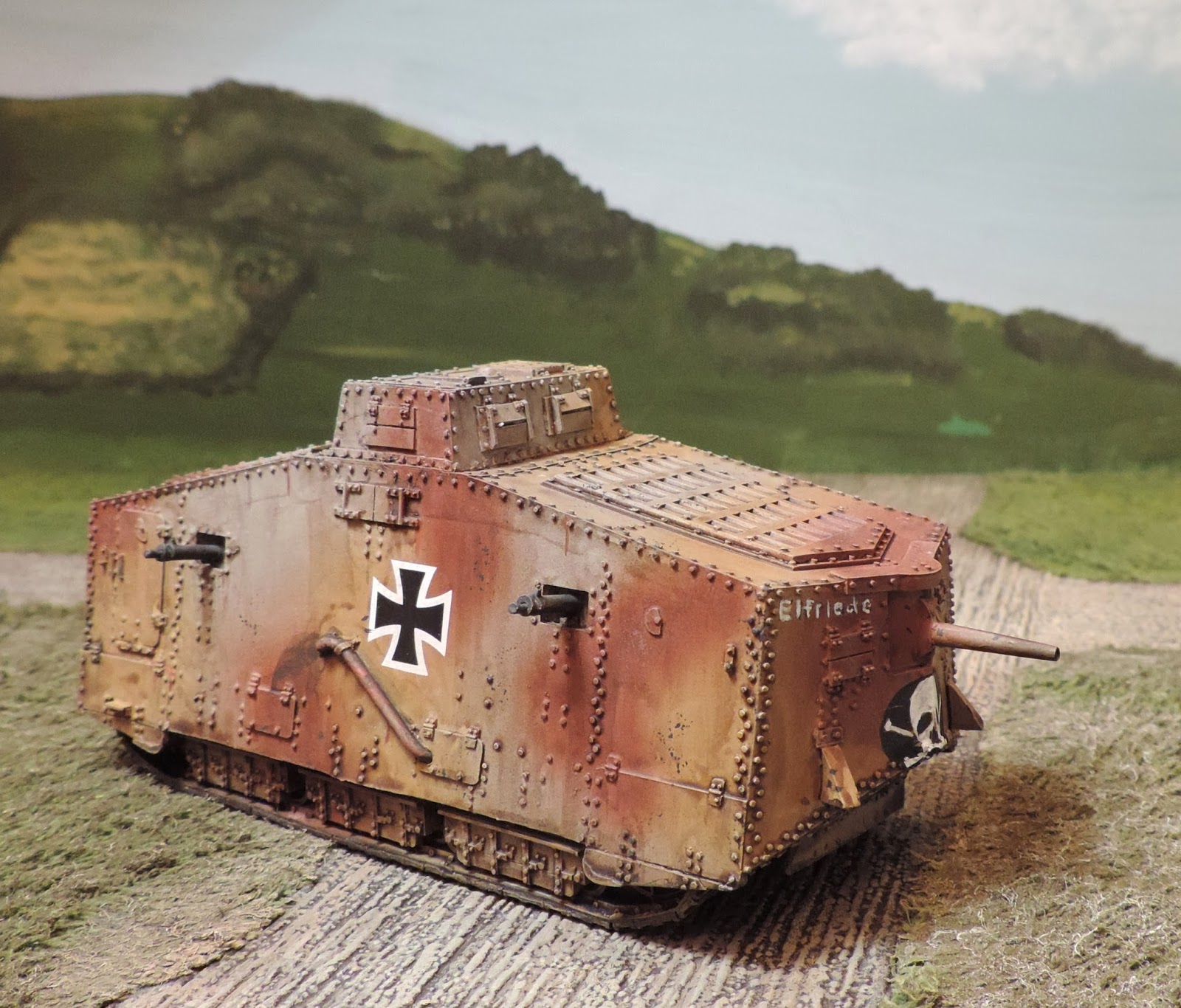 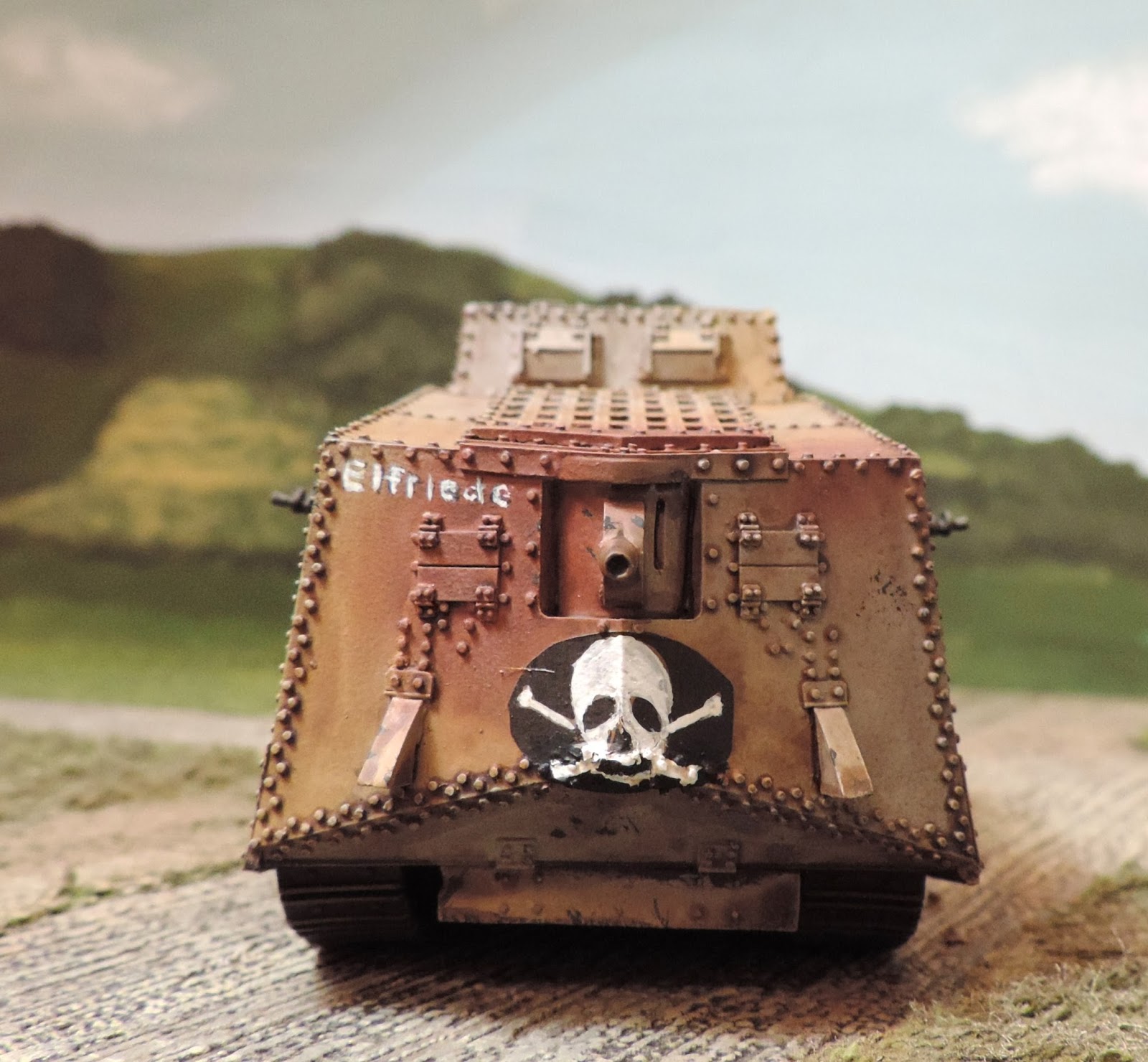 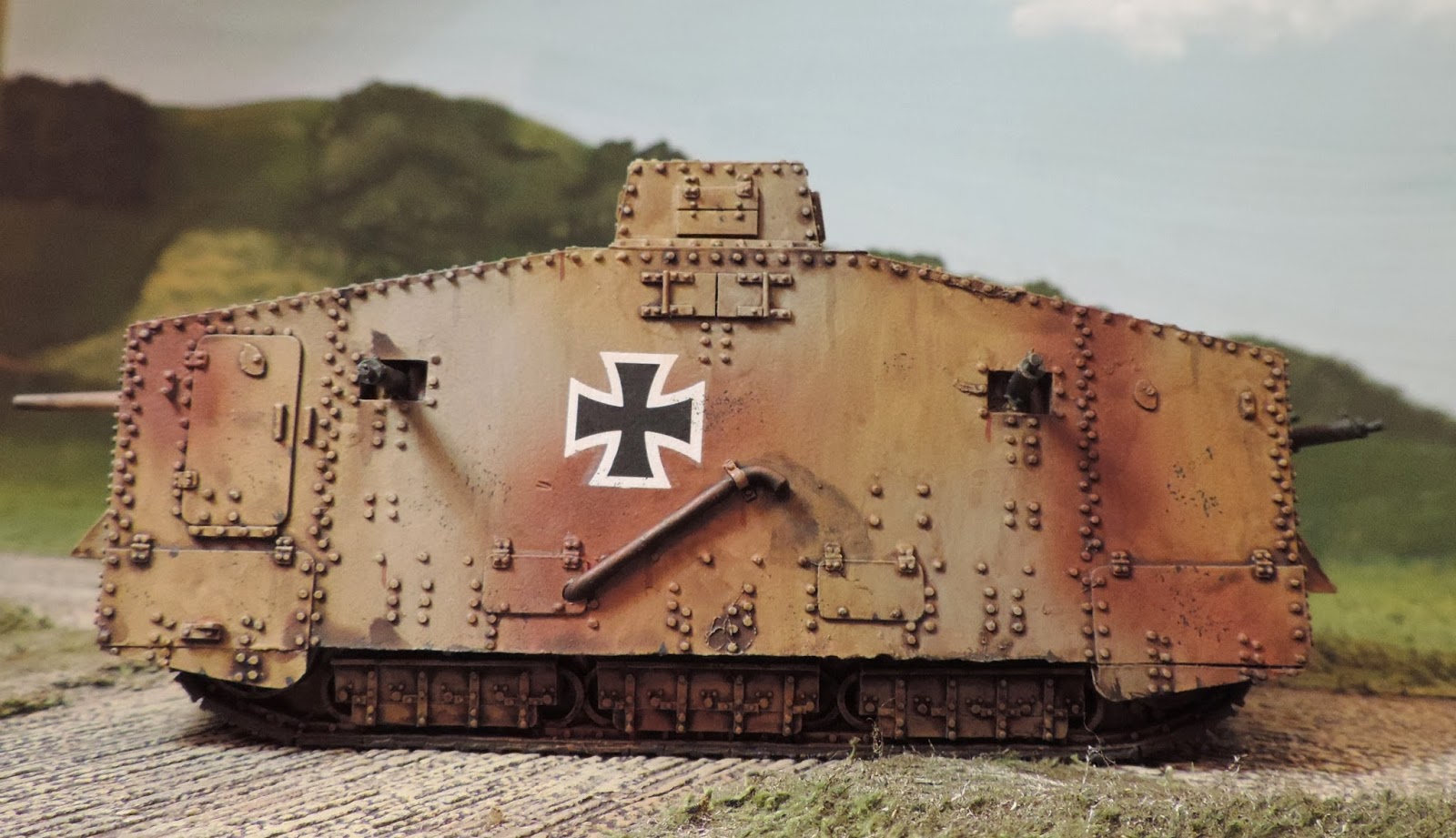 Posted by Phil Robinson at 10:21 10 comments:
Email ThisBlogThis!Share to TwitterShare to FacebookShare to Pinterest
Labels: Painting, The Great War

Rescue Biccles! - A Through The Mud & The Blood Game

Dave valiantly braved man flu, the wind and the rain to visit OHQ for our first game of 2014, a Great War game using Through the Blood and the Mud rules, together with one of the scenarios from Winter Sports in one of the Lardie winter specials. Allied flying ace Biccles has had to land his damaged crate in no mans land where he has been captured by the dastardly Hun.

The commander of the nearest trench section Major "Tubby" Bykleigh decides this is just not cricket and orders Lt. Reggie Rawnsley to gather a force of volunteers for a night raid to locate and rescue Biccles. Reggie has a force of 2 NCOs and 28 men for the task, a good mixture of bombers, rifle grenadiers and seasoned trench fighters together with a Lewis gun for additional fire support. The going across no mans land was slow, but it also seems to raise little observation by the German sentries indeed two are eventually set upon but manage to fight off their attackers before belatedly being overcome. 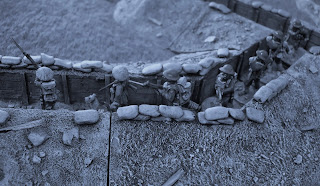 The two groups of British then moved down the communication trenches in search of the command dug-out where Biccles was believed to be held, over on the right the group by-passed the one bunker to deal with the German MG which had now been deployed. Over on the left the group there was attacked by Germans leaving their dugout, this group contained the tough trench fighters, bombers who made short shrift of them, capturing their NCO in the process.


They then located the command dugout and were able to spring Biccles, by this time the general alarm was raised and German reinforcements began to arrive, the British prepared to evacuate sending ahead Biccles and Cpl. Stan Stafford ahead whilst they prepared to beat back the German counter attack. The Germans seemed very wary and the British were able to get an healthy head start, there seemed little chance of recapturing Biccles and the British retreat was covered by Lt. Rawnsley and the rifle grenade and Lewis team so the Germans did not pursue beyond the front line trench.

There you have it a rather brief overview but I hope it gives a good idea of the action, only a few pics too as one pic of figures in a trench is much the same as another. If you are wondering about the colour of the pics I thought this would give an impression of night.

Posted by Phil Robinson at 16:51 8 comments:
Email ThisBlogThis!Share to TwitterShare to FacebookShare to Pinterest
Labels: Games, The Great War, Through The Blood And The Mud
Newer Posts Older Posts Home
Subscribe to: Posts (Atom)