The Triumph Of Don Byklos, A First Carlist War AAR

Having recently finished some skirmishers for each side we decided to play another First Carlist War game,
we again used Neil Thomas's 19th century with a few modifications to suit our needs. Below is the battlefield prior to the engagement, Dave AKA Don Byklos Esparanto commanded the government force whilst I Don Felipe De Rawnla took command of the Pretenders forces.

Below Don Felipe deploys his forces 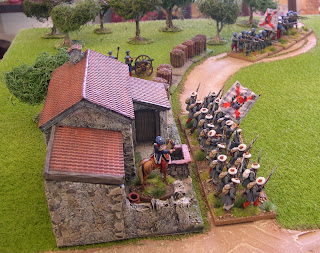 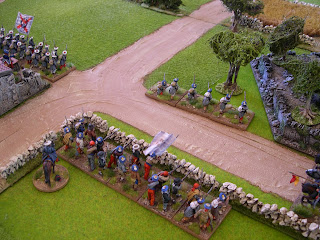 Meanwhile Don Byklos begins his attack, on his  left he deploys a light infantry battalion and his skirmishers, in the centre the Princessa line battalion, whilst over on his right which will be his main attack he deploys two battalions of British Auxiliary Legion and the Espana battalion, these will be supported by a horse artillery battery and a Royal Marine rocket troop, at this point his cavalry are held in reserve looking to exploit any gaps or weak spots in the Carlist line. 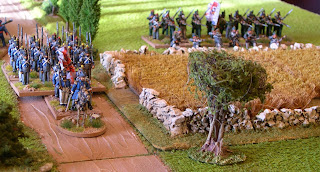 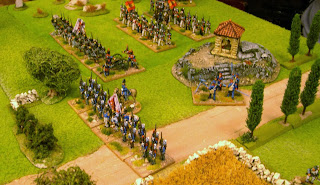 The BAL begin their advance on the Carlist positions, facing them are the Navarre battalion who are going to make them pay dear in due course, the rocket battery prepare to deploy on the elevated position of the
wayside shrine to support either flank when necessary

In the centre and on the left flank the forces of Don Byklos advance to pin their opponents whilst the attack on the right goes in, he also brings across his cavalry to counter the Carlist lancers.

The Pricessa battalion is seen off by the weight of fire, forcing Don Byklos to commit his cavalry and charge the Carlist Vizcaya battalion forcing them to retire, the Carlists advance their lancers who flushed by success are charged by the ﻿Liberals, despite the advantage of the charge they are bested by the lancers of Navarre who in turn are afterwards forced to flee by fire from the Royal Marine rockets. Despite this things are looking good for the Carlists, over on the other flank the artillery and brave men of Navarre have forced both BAL battalions to retire. 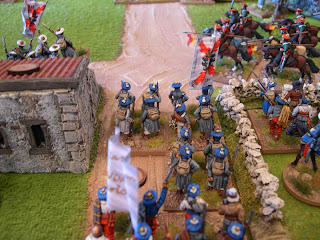 The Navarrese should really have followed up this success but were deterred by the loss of the artillery battery to fire from the Liberals artillery, this allowed Don Byklos to regroup and launch another attack against them, this time whether due to fatigue or being low of ammunition they were unable to repeat their earlier success and were forced to flee, this left the Liberals able to attack the Carlist right flank in support of the light battalion and the skirmishers who had driven in their counterparts. 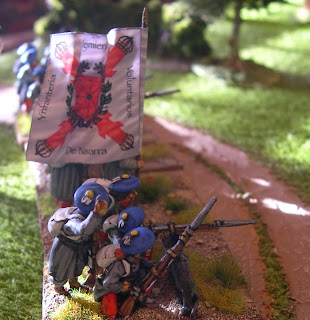 With the Vizcaya and Guipuzcoa battalions seriously depleted and only untried volunteers in support Don Felipe conceded the field to the government forces. All in all a rather splendid game, not sure about the rules yet but the game does rattle along with them with thirteen turns played in a little under three hours with a break for lunch and drinks in between. 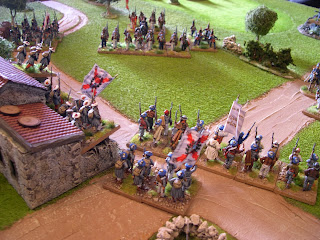 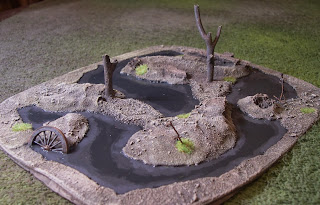 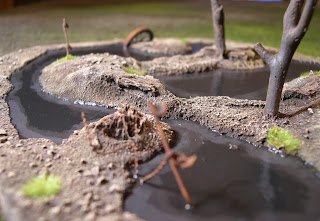 Going forward in time I have finally got around to painting up my Hetzer (love these wee beasties) from the Ready To Roll range, ready to bait the Russian bear in a forthcoming WWII game

﻿Its looking like the First Carlist War game will be on, will have my camera on hand to post a full report.

Apart from fiiling gaps and laying down some Miliput retainers for the detachable pieces not much has gone at the villa the last couple of weeks. 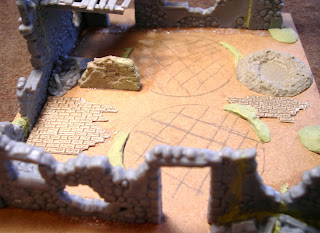 This changed today, yesterday at Warfare I picked up the new 4Ground fireplace, at £3.50 a tad pricey you may feel. However it took just 10 minutes to assemble and is already coloured, you couldn't do it yourself for that price in time alone.

﻿﻿﻿﻿﻿﻿﻿﻿﻿﻿﻿
Whilst at Warfare I also purchased a resin Swamp/Oasis/Marsh piece from Coritani, I thoght it would be ideal for some waterlogged ground in my Great War games, today I added a couple of shell damaged trees, a sunken wheel and some picket posts, again a purchase yesterday from Tablescape.﻿﻿﻿﻿﻿﻿﻿﻿ 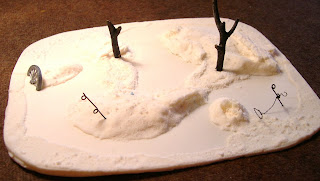 Also yesterday I purchased the latest Battlegroup supplement "Fall of the Reich" together with the mini rulebook so I no longer have to leaf through the massive Battlegroup Kursk tome during games and the new morale chits to go with it from Commission Figures, also on the WWII theme I got a SU37 for the Soviets, although available it is doubtful that they saw service before the war ended but it looks nice, I also got a crew for my Ostwind, a ready painted die-cast by Panzerstahl via EBay. Oh and some more MDF bases for rebasing my WWII collection from the wonderful chaps at Warbases, quality stuff with quality service.
Hope to play a First Carlist War game at the end of the week pending new grandad to William David being in a fit state, congratulations to parents Ruth and Craig.

Monday has become our regular day for gaming of late, with the guns falling silent on the Western Front this day 95 years ago it seemed only fitting to play a game set in that fateful month of August 99 years ago. A full report can be found on Dave's blog 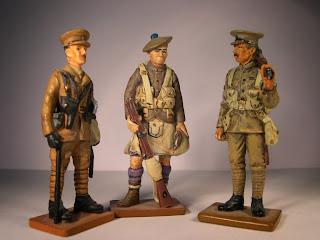 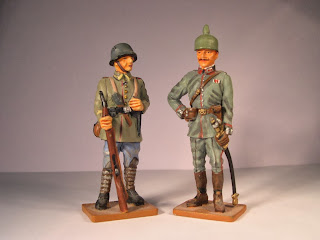 We will remember them
Posted by Phil Robinson at 11:09 No comments:

Email ThisBlogThis!Share to TwitterShare to FacebookShare to Pinterest
Labels: The Great War

I thought it was about time that I added another terrain piece to enhance my Great War collection, I wish you a warm welcome to Shrapnel Villa 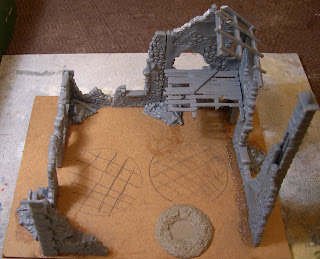 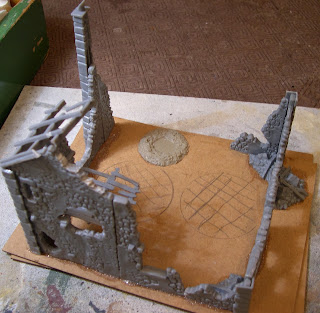 The circled cross hatched areas are to be kept clear for the placement of machine gun teams, I will make separate pieces with debris to put in when the ruin is unoccupied.

The building remains are the ruined farmhouse from Warlord Games, the MDF base is from War Bases, I can't remember who makes the small shell crater.

More as it progresses.

Although I'm sure no one is really bothered whether I post again or not I have been encouraged to have another go with Blogger. Here is the report I had to give up on before, it features a recent  Great War game here at OHQ between Dave and myself using Bolt Action rules with the GajoGames amendments and add ons, he took control of the brave Tommies, whose objective was to take three objectives in the German front line. The game would last twelve turns with a D6 being thrown at the end of turn twelve to determine the number of further turns. 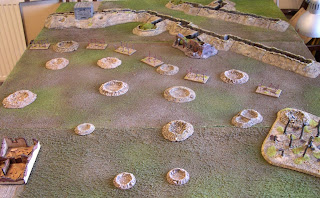 ﻿The objectives are, the pill box, the position to the left of the ruin and the one directly behind, these were covered in camoflage netting so the British did not know what was positioned there until the Germans fired or were spotted, we used the spotting rule from "Battlegroup Kursk".

The British were given a preliminary bombardment, again we used the mechanism for indirect fire from BGK, this resulted in two units being pinned but no casualties. The British commenced their attack on the right spearheaded by a Whippet tank.
﻿
The British took advantage of the cover of the wood to advance on the German left flank, the rifle grenadier section taking up position to bombard the German trenches there, meanwhile the Germans had positioned their anti-tank gun in the forward position on ambush orders and it opened fire on the advancing Whippet with no effect.

Over on the British left, Dave positioned a rifle and a Lewis gun section to threaten the Germans on their right flank and pin them down with harrasing fire.
﻿ ﻿