Action At The Byklov Collective, Somewhere In Russia 1943

A game using Battlegroup Rules, around 500 points a piece, the Germans had a BR of 28 and the Russians a BR of 25. The scenario is a meeting engagement from the Battlegroup Kursk book.
Things started off a little slowly with the Russians not getting many orders and the Germans unable to get their reinforcements on, so a slow build up to the action, the Germans came through a Katyushka stonk pretty lightly and got first blood knocking out a T34 but were unable to get in contact with their off table artillery until well into the action, but it was this this that helped save them causing several pins and forcing the crew of the KV1 to abandon it. Meanwhile the Russians were steadily advancing, with the Maxim MG and the T34's pinning the Germans and then assaulting them with the infantry, the German BR rating was slowly getting to breaking point. A bit of a reprieve by pulling an aircraft chit, one didn't turn up though, this might have sealed the game, the Russians balanced this up by pulling a mine strike chit, KABOOM! the Germans were minus a Stug. Things were getting pretty tight now the Germans were nearing their break threshold and from the look on Dave's face the Russians were likewise, I really needed to inflict some serious damage, so I took the chance of pulling and chit and rallying, another aircraft chit, again this might come in handy next turn should I survive, this was also the turn when the belated off table artillery came in inflicting more pins and forcing Dave to rally so that he could press his advantage in his turn and push the Germans over the edge, alas it was not to be the chit took him one over his BR, goodnight Moscow.
A very tight game with the Germans also needing only a one to push them over.

The Russians really had the advantage when they called off the attack, but this is were the brilliance of the Battlegroup chit and BR rating comes into its own, negating the war gamers all seeing eye.

The core rulebook is about to be reprinted if you fancy giving BG a try.

Inspired by a fellow members superb aircraft on the Guild forum I have completed a Revell P39 Airacobra for my 20mm Soviets.
I would like to see it appear in our game next Monday, but then again as I will be the Germans perhaps not :-) 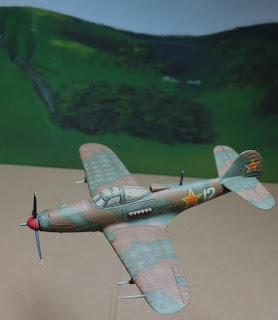 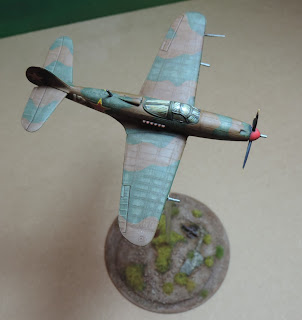 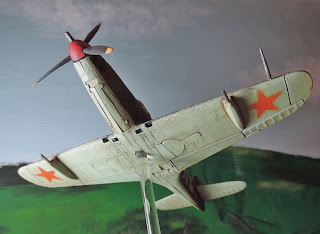 Be sure to tune in next week for a report on the game.

Me in fact, five times yesterday in a splendid ACW set to using Black Powder rules and suggested amendments from the Glory Hallelujah! supplement. One can read all the detail over on Dave's GHQ blog, click the link on Topping Blogs sidebar.

Yes another one, you may recall that I started this Fabri die-cast way back in March. I thought that it really should be finished off, so set to just prior to going away. I finished the base last night when when I got back.

I also put paint on three Ready To Roll German soft skin vehicles which I hope to complete soon.

A few bits that I have squeezed into my workload recently.
For the Great War, a 77mm field gun and crew From Great War Miniatures, I have also done the early war version but forgot to photograph it. 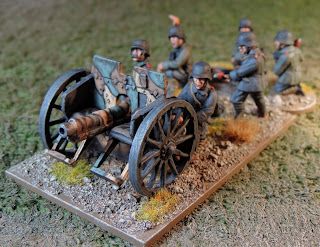 Whilst at the Derby Worlds last weekend I got some more pieces from Coriatani to fill up no-man's land, a bargain at £7.50 total, I have added some barbed wire and a corrugated iron sheet to make the multiple crater piece a little different to the same piece I already have . 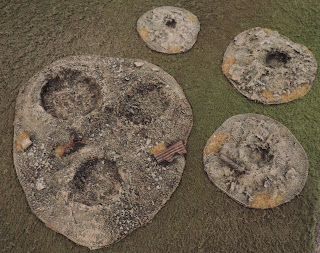 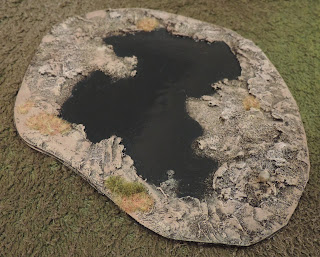 I also got one of the new trench pieces from John at Ironclad Miniatures, a shell damaged section, I really like this one and I am looking forward to the other pieces he has in the pipeline. 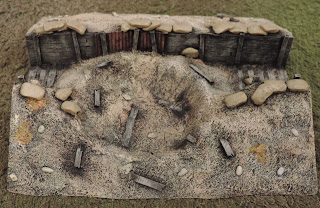 For the Spanish Civil War I have painted some miliciano's and miliciana's, I also picked up from Empress Miniatures the recent Republican support weapons pack so my SCW lead pile has not diminished. 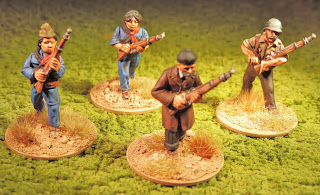 That's all from OHQ for the time being, back in a couple of weeks or so, take care.