Phew a month gone already, a very busy one I'm happy to say, getting figures completed to deliver to customers at Partizan. Speaking of which, a very quiet show, is this a sign of the times or just due to Triples moving to the week before? None the less I still enjoyed the show, particulary pleased to view some of the games that were at Salute in a venue with a bit of a soul, OK the catering could be better, can't fault the bacon butty though, and it can get a tad dismal in some of the darker recesses, but it is still my favourite show(s).
Painting in June has continued a pace (yes Dave your 3rd Nellie is underway), lucky enough to be blessed with a good amount of commission work so will not be out on the street just yet. The downside does mean that my own projects are suffering, although I have completed another two Wars of the Roses bases and I am on the last bases for a 4th Carlist and Isabelino battallion. If you have visited my EBay page you will see that I have abandoned my Post Apoc and Pulp World War II projects to concentrate on my historical and semi-historical projects, I will have more of these up after my holiday.
Still getting the weekly games in too, have mostly been playtesting Dave Bickley's http://www.northstarfigures.com/list.php?man=94&page=1
latest colonial set,  for the Indian Mutiny. We have had some cracking games with these, and yes the natives can win, even with me commanding them, the rules use the same basic mechanisms  from Dave's previous set and yet are completely different in many respects, if that makes sense. These should be available in the near future. Also had a game using Hail Caesar which I enjoyed a great deal, much better than WAB imho, yesterday we played a Back of Beyond game using "Brigadier 38" http://solwaycraftsandminiatures.webs.com/books.htm  although designed for the Very British Civil War "period" they seem highly suitable for our 1940 Britain Invaded and Spanish Civil War games also.  Speaking of a VBCW here is a BUF staff car I made using a Models of Yesteryear 1912 Rolls Royce, the driver is a Foundry Darkest Africa explorer with a Empress SCW head and a hand with cigar grafted on from a spare figure in the bits box, the commander is a Musketeer Miniatures figure. 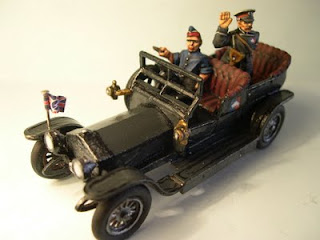 Sorry for the picture being out of focus my camera seems to have given up being able to do close ups, but it could just be me of course. TTFN
Posted by Phil Robinson at 11:59 2 comments: