Yesterday Dave came over for our second Great War game using the same scenario as before but this time using Bolt Action rules with Gajo Games house modifications.
The forces used were similar too, but using the Bolt Action points system, this gave the attacking British 835 points and the Germans 430 points. The British again had the benefit of a preparatory bombardment on the wire and on the German trench line, whilst the Germans had the benefit of being hidden.

Dave chose to use the same plan so has to get a better comparison between Bolt Action and Great War Chain of Command, however because of the shorter ranges in  Bolt Action he had to deploy his rifle grenadier section on the the left flank this time to take advantage of soft cover, they did however serve the same function of supporting the British attack with their overhead fire capability.
The game would last the standard Bolt Action six turns with the dice deciding if another would occur rather than our normal twelve.

The ended on turn six with the British controlling one end of the line and the Germans the other, both sides having taken thirteen casualties, pretty light for Bolt Action game we thought. We decided that the result would be a draw, however had we played our normal twelve turns I am pretty sure that a British success would have been achieved.

How did they compare? Well I think the shorter ranges in Bolt Action  made it more difficult for the attackers, whilst the Germans had all there units on the table this made it easier for me, in the CoC  game,  I failed to get a unit on due to my command rolls and the need to prioritise their use elsewhere, perhaps a fault of mine rather than the system. I found both games enjoyable but always felt on the back foot with CoC and I know Dave is not keen on the Patrol Phase in CoC, I don’t mind it but feel that it is not quite right for the Great War setting, I have purchased Sharp Practice 2 and I think the Deployment Point system in there may be a better way to go, I will give it a try next time. I also think that the shorter ranges are a bit restrictive, in the usual close terrain of World War Two this is not so much of an issue for me but I do feel have a detrimental effect for the Great War setting. I thought that overall CoC gave a better feel for the uncertainty
of things going to plan in the Great War than Bolt Action.


Dave will give his thoughts in due course hopefully. Here are some pics of the action, next time we will revert to Through The Mud And The Blood with the same scenario, until then TTFN


PS. One thing common to both games............................My bloody sniper was useless!
Posted by Phil Robinson at 03:20 6 comments:
Email ThisBlogThis!Share to TwitterShare to FacebookShare to Pinterest
Labels: Bolt Action, Games, The Great War

To ease myself back into figure painting mode after our summer break I finished off the Warlord Mk. IV I started back at the start of the year, you can see a picture prior to weathering in one of my March posts.
The weathering was done using Mig products, a three tone camo wash highlighted, then chipping added together with rust and oil patches. It was then varnished before adding some streaking grime and varnished again prior to adding a filter before a final drybrush of my base colour on the lower parts and a last coat of varnish. I wanted a rough hand painted look on the crosses so I painted them by hand, accentuating the black part to enhance visibility. 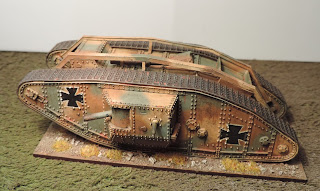 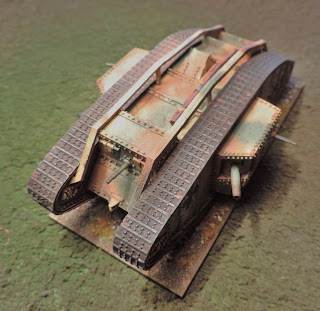 Keeping the Great war theme, Mondays game will be a Great War game, the scenario from the previous game but this time will use Bolt Action with the Gajo Games mods.

TTFN
Posted by Phil Robinson at 02:10 8 comments:
Email ThisBlogThis!Share to TwitterShare to FacebookShare to Pinterest
Labels: Painting, The Great War

I managed to finish another unit of Goth archers before we went off on our break, I also painted a couple of Ebor Miniatures War of the Spanish Succession figures, I had toyed with the idea of revisiting the period, but after seeing the lads from Grimsby's game at Partizan I was reminded of one of the reasons we sold up and moved on. Half a dozen units on a six by four does just not cut it, I may build a small force for each side based in peninsular for Sharp Practice, we will see.


Off to Dave's on Monday for a French Revolutionary War bash and Christen Dave's new town, he has made a superb job of it, do check it out on his blog, listed on the side bar Tales From GHQ

Today we revisited the Great War using the World War One variant of Chain of Command. Dave took command of the Tommies whose objective was to capture the German Kaiser Wilhelm observation bunker in the German second line. The British force comprised of a 1918 platoon, with the support of a MkIV Male tank, there had also been a barrage on the German wire prior to the attack.
It was a game of two halves, one half could not seem to hit a barn door at point blank range, me of course and Dave who must have ate 5's and 6's for breakfast and then proceed to spit them out when dicing to fire. My 5's and 6's appeared in my Command Dice rolls, it did however give me a stock of Chain of Command dice which came in really useful to negate some of the morale checks without which the game would have been over a lot sooner.
A pictorial narrative of sorts follows, which will I hope convey the unfolding action

Some in period photos of the tank advance. 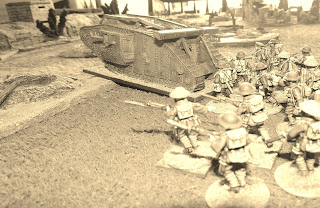 We intend to do a similar thing that we did with the Seven Years War earlier in the year and play the same action with different rules, next up will be Bolt Action followed by Through The Blood and the Mud rules.
Off for a break later in the week, back in a week or two.