The Harvest Is Saved

The Lord was with us today for we thwarted the attempts of Penda Fudd and the Saxon invaders to burn the harvest we had toiled long for during the summer months.
We thought that our lone body of men left to guard the crop would be overrun but the advance of Penda's force was slow, being held up by the slow advance of his bowmen, if he had known how ineffectual they would be later, he would have left them behind I am sure.
We were unable to stop them reaching the haystack, but the Saxons were not very adept at creating fire, or the crop was damp, for they were unable to set it alight. So intent on burning were they that they did not realise that our bowmen were slowly whittling their number down until it was to late, when they did they then lost heart and retired. The Saxons were able to burn the cart that was full of hay, but were unable to reach the storehouses, being held at bay by our stalwart spear men. So brave and adept were they, that the hearth guard of the great Baldinus himself were not needed to send the Saxons scurrying back to their conquered lands.
We will eat well this winter and then take the fight back to the Saxons in the spring and with the good Lords help reclaim the land that is rightfully ours.


We again used Lion Rampant with the same modifications from last game, but also added a rule that the Saxon Duguth, due to being more experienced and wise could, if they had to charge due to the Wild Charge rule, re-roll in an attempt not to.

The last post for a couple of weeks as I am away on holiday next week.

Finished these Footsore Miniatures late Romans for my Romano - Brits, I know that the legion were never stationed in Britain, but I like the shield design, let's just imagine that due to an administrative error some troops ended up being sent here, just when the rest of the legions were leaving.  :~) 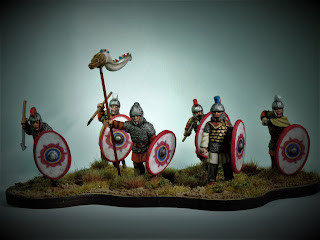 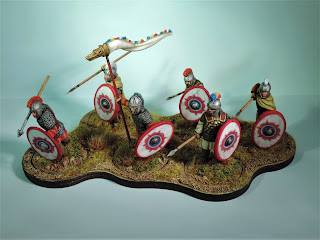 Picked up this book in a charity shop for 50p, can't pass it up at that price can you? 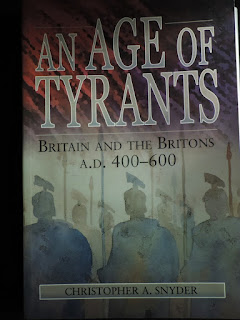 The forces of Penda Fudd continued their advance into the British territory of Powys today. We used Lion Rampant rules with the Dark Age modifications. We dispensed with the 3" proximity rule for friendly units and utilised the rule for leaders suggested in the UTube video by RossFigurePainting.

It was a hard fought action, the British archers failed to cause any real problems failing most activations whilst Dave's attack dice despite only needing a 3+ were similarly poor. The British were however eventually being worn down, the loss of their leader being the final straw, the remaining units retired from the field. 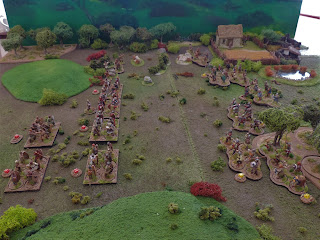 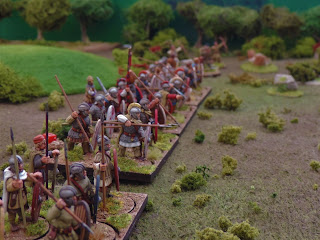 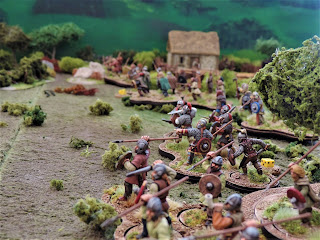 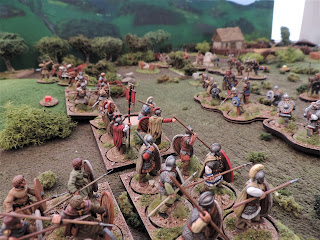 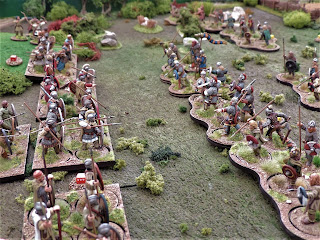 Figures are mainly Footsore with the odd Foundry and Gripping Beast figure for good measure.

A busy painting schedule before our holiday, but I just had to squeeze in the September freebie figure from Footsore Miniatures.