A Grand Day Out

If you frequent Dave's Tales Of GHQ blog you will see that we recently paid a visit to Foundry in their relocated premises, a fair jaunt from where we live now but a lot more salubrious surroundings. Dave mentioned that I got some of their "un-released" Dark Age Germans to see how they mixed with the Musketeer Goths I got recently during our visit to Gripping Beast to fight my 3rdCent. Romans. I bought the civilian pack and casualty pack as Musketeer do not have any in their range and the un-armoured command, again Bill as only done armoured command figures, I got these to see if they would mix in, the casualties and civilians do not really matter. Below is a comparison pic and pics of the individual packs. I think they will do OK don't you? It is quite an extensive range, really baffled as to why they were not released before, the range also includes specific figures for Franks and Ostrogoths the latter with the coffin shield in illustration 111 in Phil Barker's " Armies And Enemies Of Imperial Rome"  I assume that as these are not "Old Foundry" they will appear in the "Casting Room" section at some point, although some are clearly based on Copplestone dollies. A phone call or email will no doubt provide one with further info. Do pop over to Dave's blog for a full appraisal of our visit, I don't really have more to add to Dave's comments here.

I trust this has been of interest to you Ancient fans out there.

Debacle At Rawnslie Les Bains or My Dice Hate Me

Further fighting in the Rawnslie Les Bains region took place recently here at OHQ, rules were again Bolt Action with my own and Gajo Games mods. The action focused on the fighting for the German second line defences, these were thinly held by two infantry sections with only one LMG and a Maxim HMG, however support against British armour was on hand with a 37mm Anti-Tank Gun and a Anti-Tank rifle. The British would attack in force with six infantry sections, two with Lewis Guns, two with just rifles, one rifle grenadier section and a bomber section (veteran, tough fighters).
The number of turns were decided by throwing two D6, if the score was less than six then another D6 would be thrown and added to the total, we threw a 3 and a 2 with the further throw resulting in a 5, so the game would be 10 turns, however should the Germans be reduced to two units the game would end immediately and the remaining turns could then be used by the British to consolidate the won positions

The first turn saw a general advance by the British force, the event/chance card enabled the Germans to remove any pin marker, wasted has they had none!
The second turn the British advance continued coming under fire from the German Maxim, causing no casualties! The event card was a hesitant troops card to be played by the allied player on any German unit, this would immediately be given a down order, this meant that the German unit in front of British Bomber section could not fire this was to have a disastrous effect later as we shall see.
Turn three the combined firing from the MkIV and the Lewis section caused two casualties to the German Maxim crew, when it was time for it to return fire it failed its order test, things were looking bad for the Germans. Have no fear the event card was "Hun In The Sun" a strafing attack by a German plane, success! no a paltry two pins! Perhaps the German unit that was not forced down could do better, again no, 10 shots, 8 hits! one casualty, when the dice gods are agin ya, what can one do?
Turn four and the British Bombers were in the trench! A massacre, the German section destroyed to a man. The other unit failed its order test, but the event card favoured the Germans again, an Allied Ammunition Shortage, this was played on the MkIV so that it would need to move to further engage the German Anti-Tank gun.
Turn five the Allies close in, further casualties and pins on the remaining German rifle section ensue and the Maxim is wiped out. The event card gives the British commander an extra move, still fairly kind to the Germans, lets face it they needed it!
Turn six and the British assault the remnants of the remaining rifle section and knock out the anti-tank rifle crew. Game over the British have four turns to consolidate the position before the inevitable German counterstrike.
Plenty of moves to get in a strong position, although they did not have it all their own way the MkIV has become immobilised! Watch out for the next game.

My 100th post, I thought I would put up some pics of what I have completed for myself recently. I really should be painting more First Carlist War or Great War figures, but when I have been painting little chaps in uniform all day its nice to paint something a little less so for ones self.


﻿﻿﻿﻿
﻿﻿﻿﻿
Slowly building up my forces for Dux Britanniarum, next up will be some archers for the Romano-British.
All the above with the exception of the shock marker which is a Foundry Viking, are Musketeer Miniatures with LBMS shield transfers, picked up some of the funky new ones for the British during our visit to the Beasts lair at Evesham last week.
Our game next week will be here at OHQ, hopefully a Great War game using Bolt Action rules with my chance dice added which causes an event card to be drawn, to add a little more uncertainty to the game. 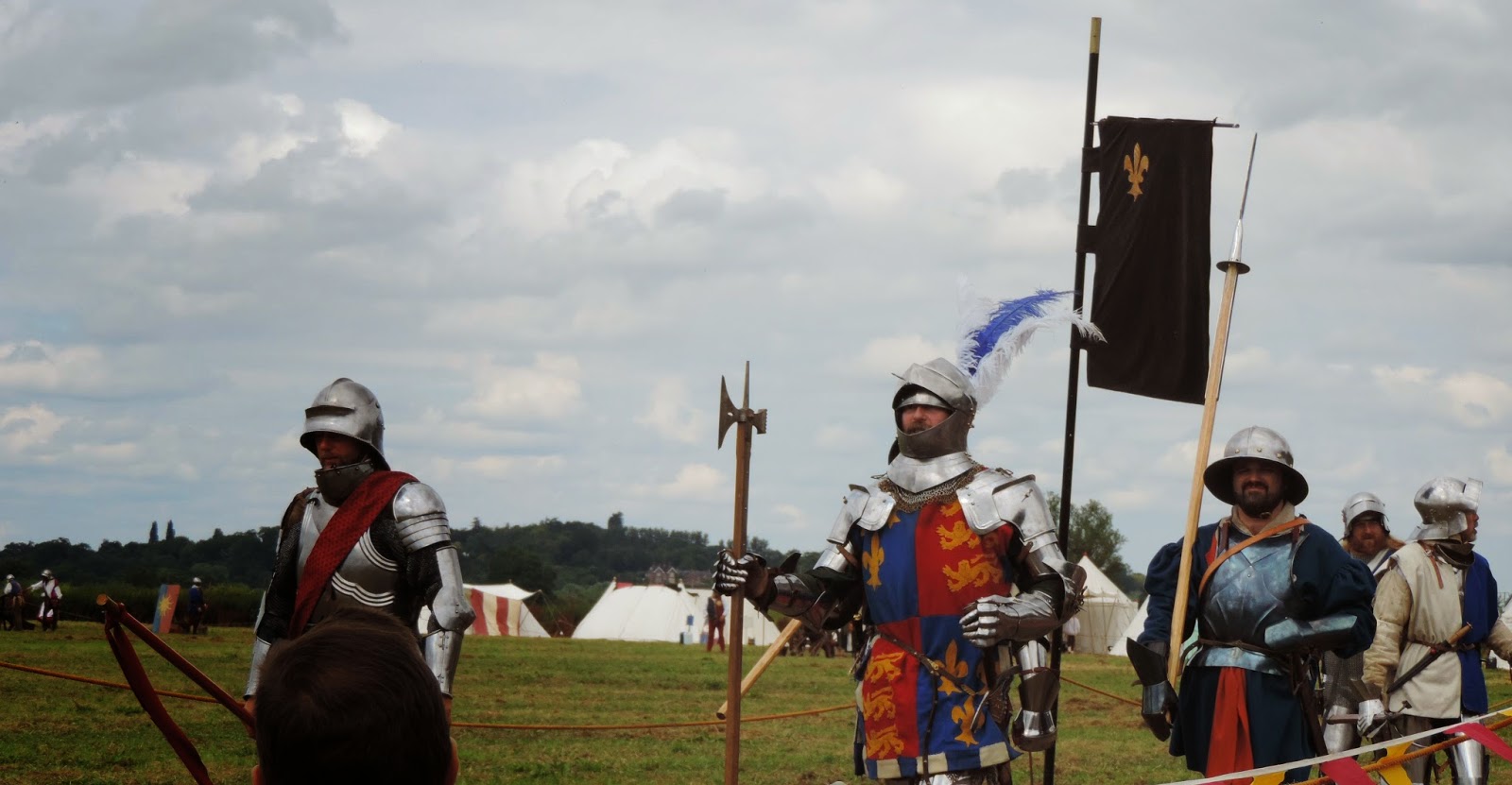 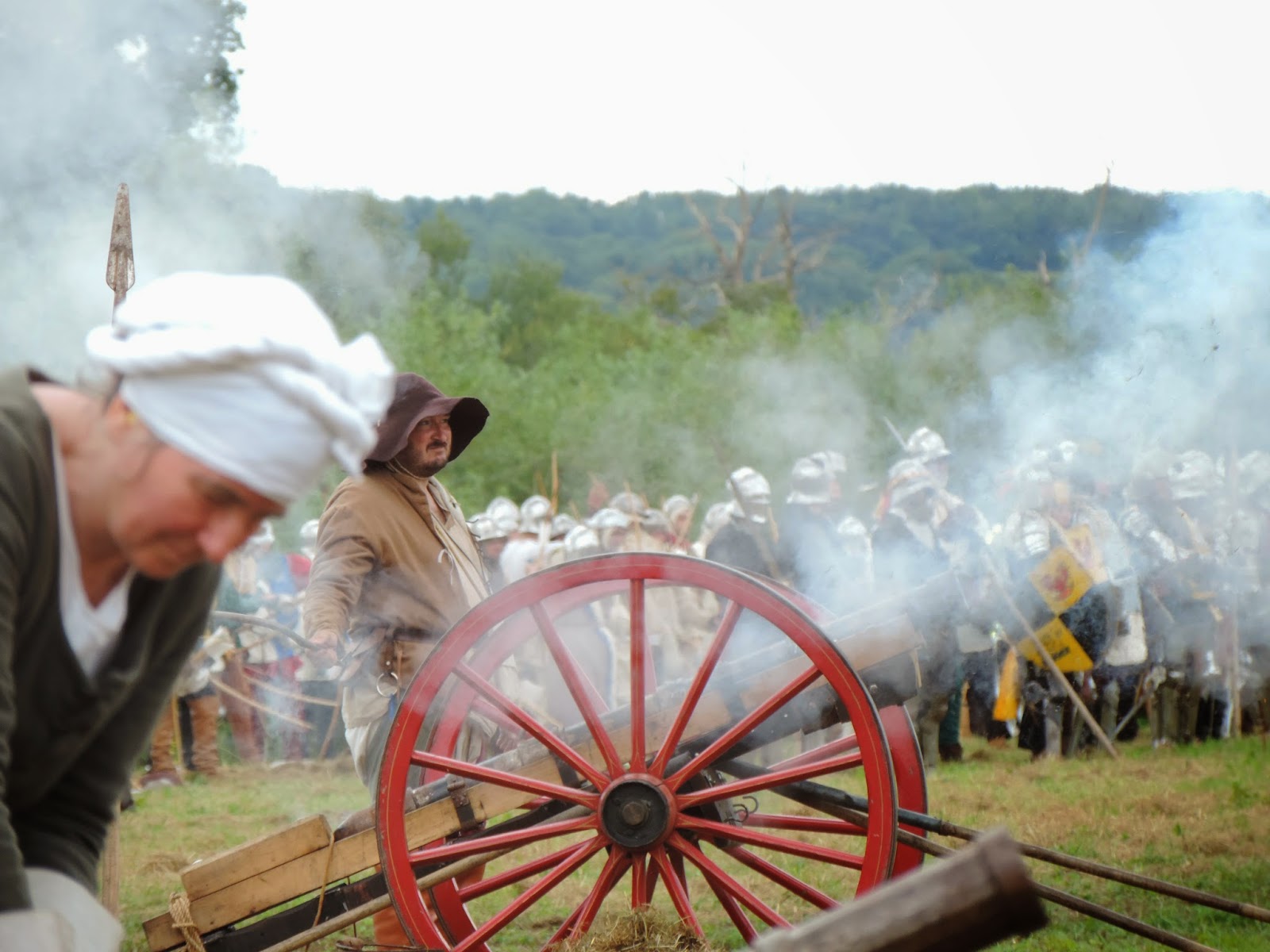 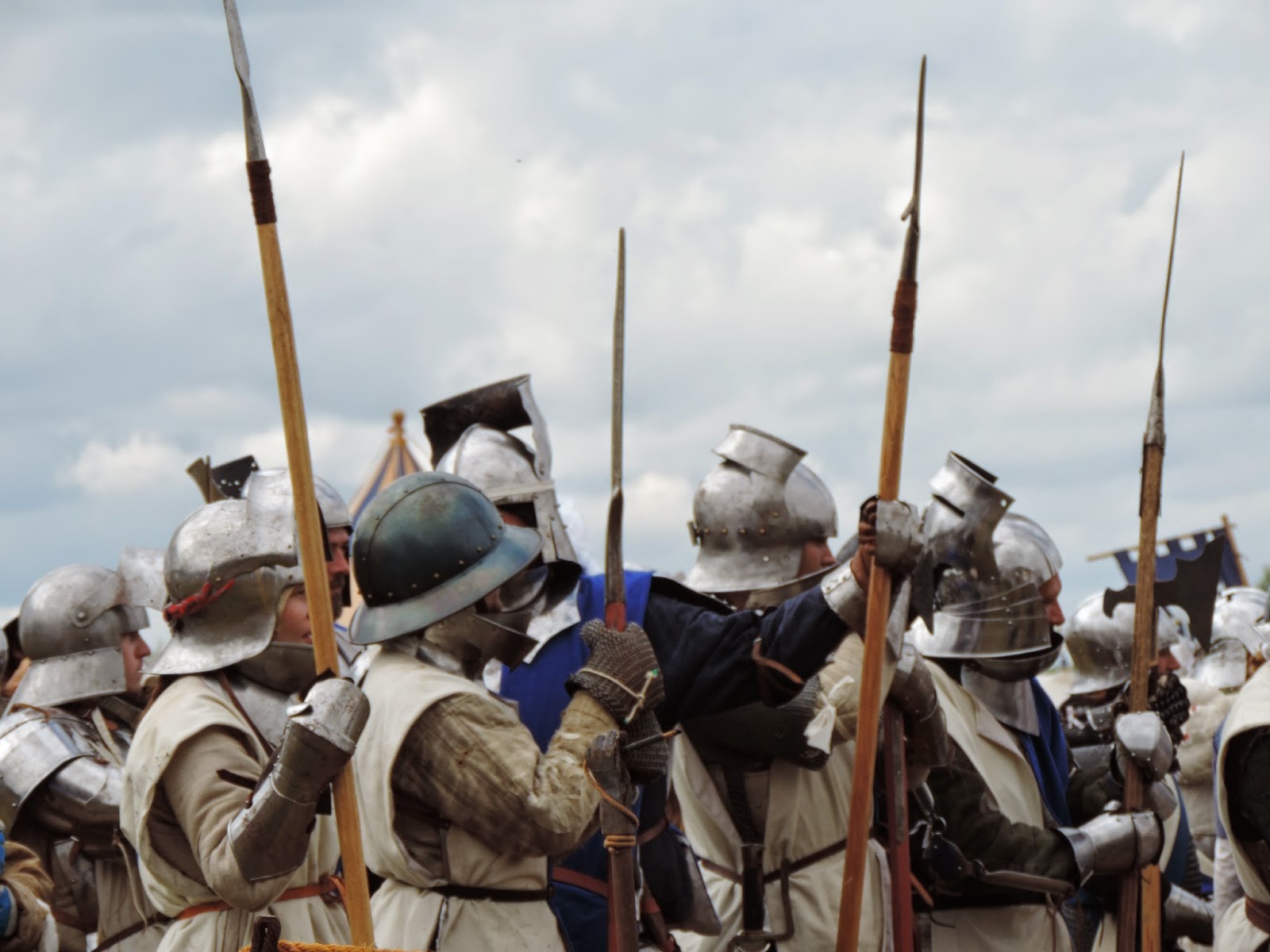 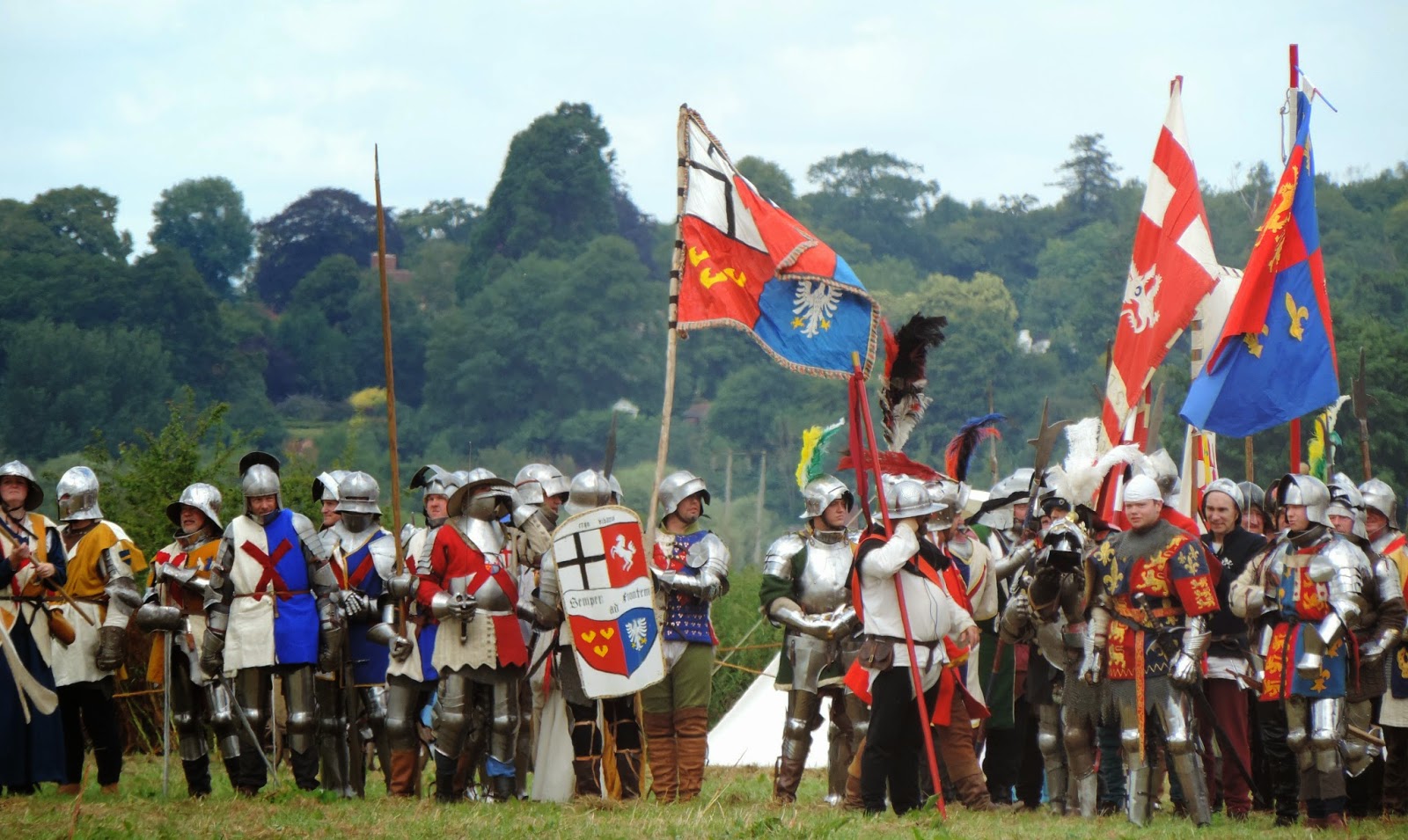 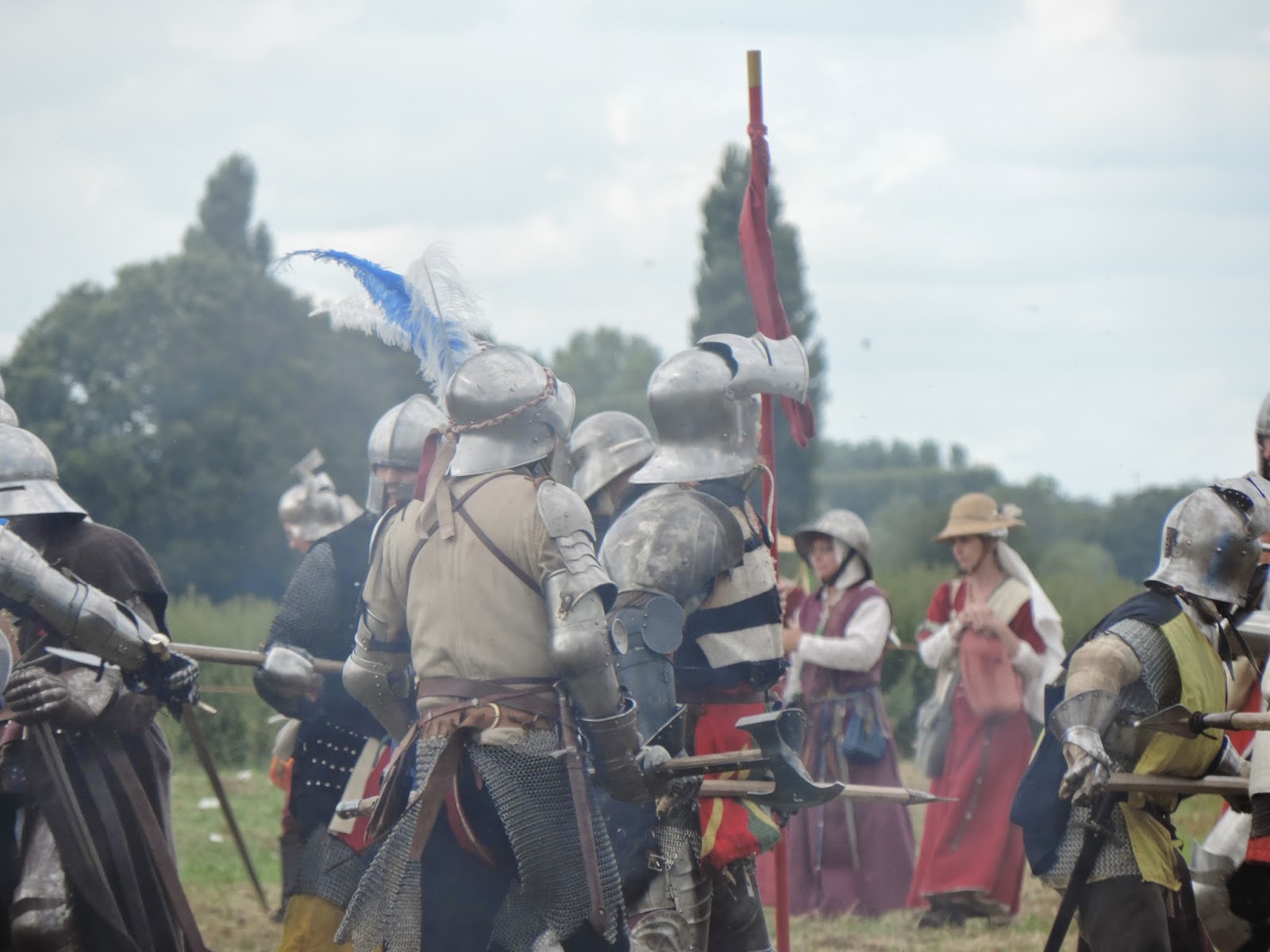 Following on from our previous Spanish Civil War game, I decided on a Nationalist counter attack on the bridge captured by the Republicans in our last game, however this time we would use Rapid Fire with Mark Hannams SCW supplement.
To add a bit of uncertainty I decided to use Bolt Action order dice to determine which side could me a unit, rather than the IGUGO method of the rules, to spice it up further I added a red dice, when this was drawn the next dice out was ignored, this meant that you could not be sure of moving all your units each turn.
The Republicans had the following to defend the bridge
One Battalion of International Brigade with support from an anti-tank gun and two companies of militia.
The attacking Nationalists had a battalion of Carlist militia supported by two companies of Falange and a company of Legion and a PZ1.