The Republican forces would deploy along and in front of a low ridge at the top end of the above pictures, the attacking Nationalists would deploy at the bottom of the picture. Their objective was to capture the Republican deployment point, which Dave, commanding the International Brigade troops had placed the other side of the ridge.

The Republic got off to a good start with their order dice coming out of the bag in quick succession, this hemmed in the Nationalists when they deployed, if they were in line of sight of the enemy they were limited to deploying in a six inch radius from their deployment points, it also enabled Dave to set up some deadly lines of fire.

The Nationalist attack got under way with the initial advance being either out of range or sight of the Republican troops, my attack was going to plan, a sound plan I thought but I was to make some serious tactical errors, by the end of turn three it was looking highly unlikely that I would achieve the objective, but we pressed on,  Bolt Action games can be quite unpredictable.

Dave chose an anti-tank gun has one of his support options, it did not do a great deal after its first firing, but it did immobilise the Nationalist Panzer I, so job done really, it was to seriously impact on the Nationalist plans.

Without the cover of the tank and effective fire support from the other squads the Legionaires had to run the gauntlet of Republican fire, the NCO casualty rate was particularly high, we played until midway of turn five, but there was no way that the Nationalists could achieve their aims, the Republicans had been able to transfer men to contest the deployment point should the highly unlikelihood of the Nationalists reaching it materialise.

I totally misused my mortar, anti-tank gun and LMG squads, giving the attackers on the flank far too little support, Dave meanwhile had set up deadly fields of fire, that I completely failed to neutralise.
A fine game none the less, using the Sharp Practice deployment points worked well I thought and as ever Bolt Action gave a splendid flow to the proceedings.

Well sort of ;~) following last week's game at GHQ I was rather taken with the use of deployment points, akin to the jump off points in  Chain of Command, which I also like. I thought that I would incorporate them in our next game when using Bolt Action rules, indeed I have also used the Defence In Depth scenario from SP2. When an order dice is drawn the owner player can deploy a unit within 6" of its DP but must also be at least 12" away from any deployed enemy unit. The unit however cannot be given a move order and if given a fire order will count as moving.
Each side will dice for for the number of support points available as per the scenario, they will be spent on the support choices from CoC Espana support option lists.
A random event dice will be added to dice bag, when drawn a card will be drawn, from six drawn randomly from my stack of eighteen.

The latest addition to my third century Roman forces, the archers are  A & A Miniatures and the command  are Aventine Miniatures with Green Stuff trousers and long sleeves added.
Two fine companies to deal with by the way. 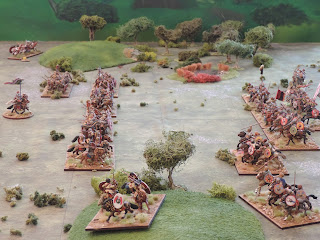 Initial moves, the Roman lanciarii can be seen routing in the distance, they took an instant dislike to the Goths shooting sharp pointy things at them. 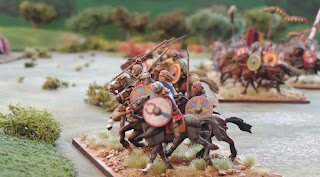 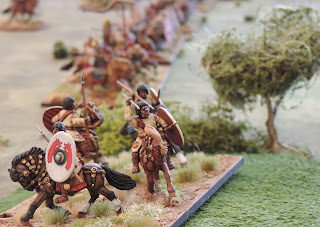 They are countered by Roman Moorish Light Cavalry, who lived up to their sobriquet "Ferocious Moors" 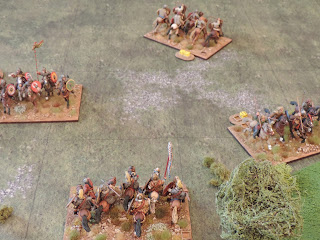 Roman Equites rout the first of the Goth cavalry 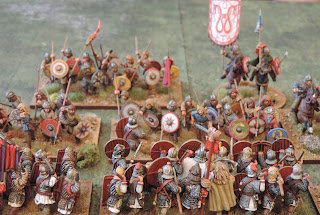 Legionaries and Goth warriors clash in the centre, the Goths held initially. 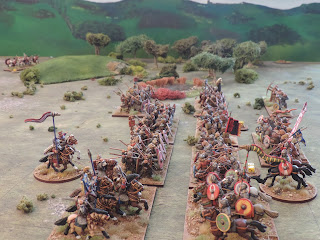 Both sides line up for the final clash. 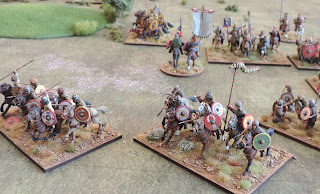 The rest of the Goth cavalry are routed 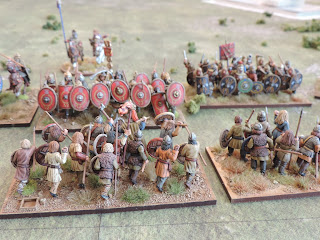 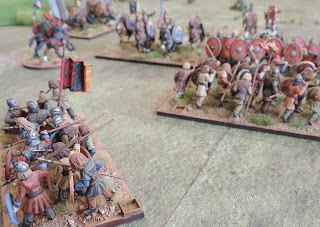 A Goth foot unit also breaks, spelling the end of the battle on the tenth turn of twelve

An enjoyable game but we both agreed that the Goths needed more numbers to stand a chance of winning,

Out Of The Dark

In case you are wondering I have not completely retreated into the Dark Ages here at OHQ, below are some recent additions to a couple of my other projects.

After our last Dark Age game Dave was keen to give the Kings Of War Historical rules a run out with the Goths and Romans, been away up in Scotland we did not want to fry our brains with any of this modern warfare :~)
Report to follow in due course.

First off I would like to thank the organisers and the folk who put on such splendid games and of course the traders who travel far and wide to provide for our needs. Carronade is a grand show indeed, all the games are of a fine standard and I have yet to come across any of the heads down. arses up bugger off we are trying to play brigade there, here's to 2018.
It was nice to meet fellow bloggers Colin and Matt, do check out their super blogs on the sidebar at some point, Carryings On Up The Dale and Wargames In The Dungeon respectively, well worth the click.
I decided to take more pics of the periods that interest me or games that particularly caught my eye, so I apologise to those whose games I have neglected, all were worthy of being snapped. 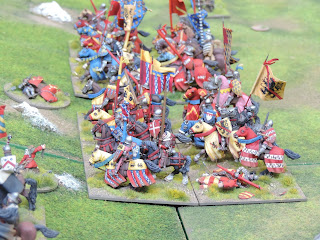 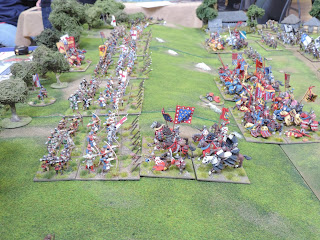 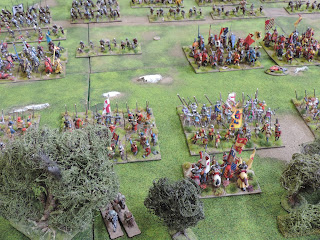 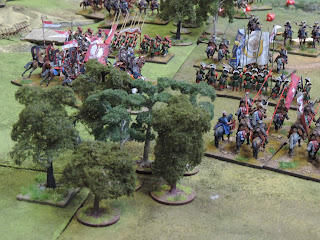 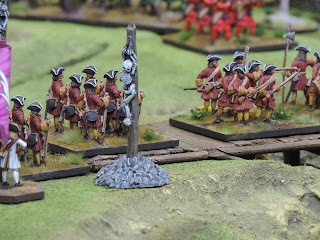 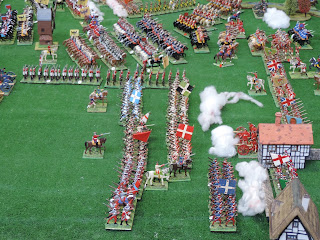 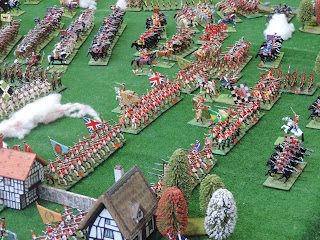 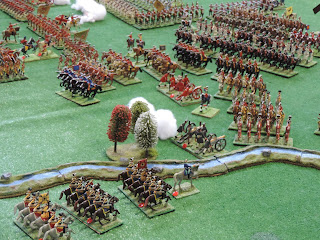 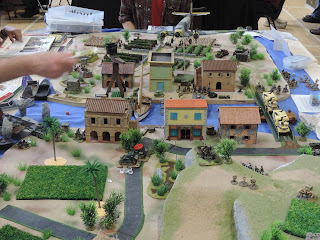 I thought I had taken some of the splendid 42mm Spanish Civil War Game, they may be on the IPad, I will check and post them later. Here they are

Can't imagine anyone being interested in what I purchased but here you go -
Wildlife and bases from Warbases
WWII AB Russian Vehicle crew from Fighting15's
Footsore Miniatures Early Saxons and Romano Brits from Ainsty
Double dice holders from Pendraken
A pot of Vallejo Panzer Aces paint for a £1, bargain from ?
Four resin tree stumps from Coriatani
Not a lot but its Partizan next week after all

Pics From Carronade 2017 Part I

The first batch are exclusively from our chums Kevin and Peter's (AKA The Iron Brigade) rather splendid Wars Of The Roses game, which deservedly won the best demonstration game award. 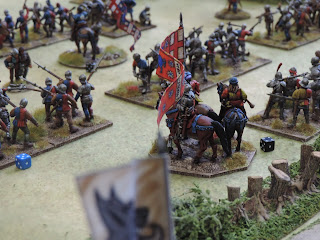 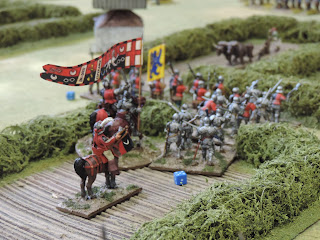 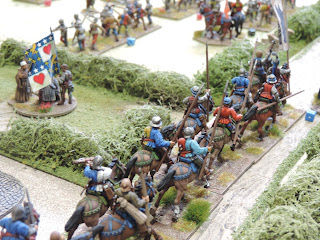 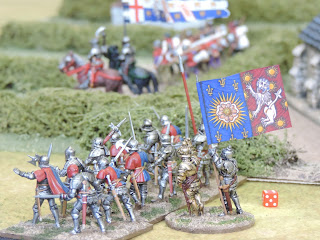 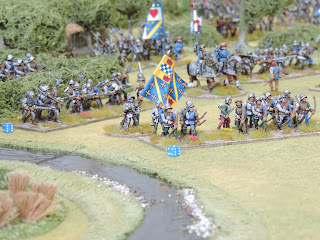 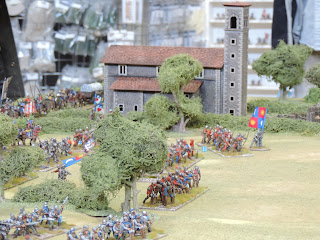 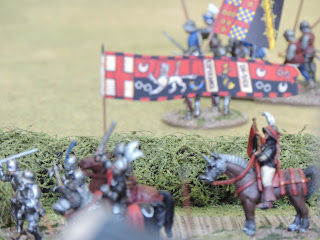 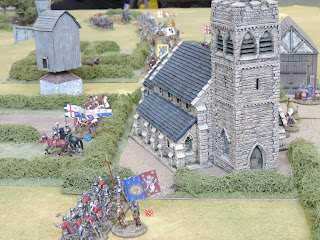 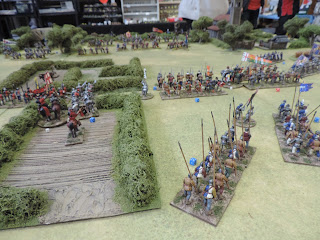 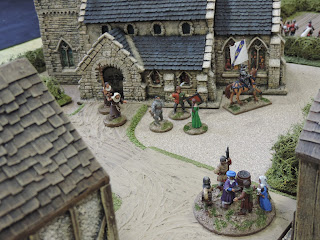