During our last game via Zoom, Matt said he was looking for something in between Lion Rampant and Kings of War for Dark Age games. I suggested that Neil Thomas's Ancient and Medieval rules my fit the bill and that I would host a game using them and our house rules.

We met up remotely on Sunday and played out a Saxon attack on a Romano-British village using the standard eight units per side in the rules. 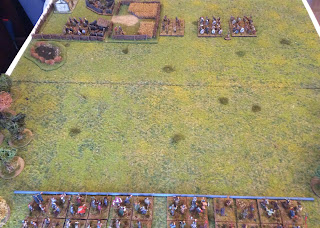 Defending the village would be three units of militia and a unit of archers supported by a ballista crewed by some ex auxiliaries, coming to their aid was a unit of Arthurs infantry and a unit of cavalry. These would appear at the start of turn two needing 5 or 6 on a D6, 4, 5 or 6 the following turn and anything but a one thereafter, when they did appear another roll of a six would see them appear on the Saxon flank just passed the half way line. 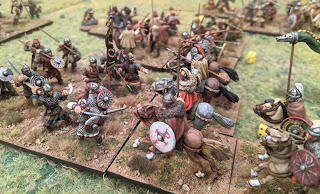 Needing to get stuck in and also be wary of the flanks the Saxons surged forward, the cavalry arrived in turn two, fortunately for the Saxons not on either of the flanks. 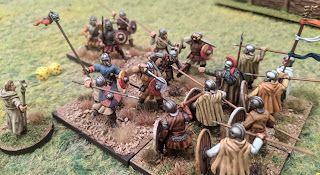 The militia seeing the advancing Saxons immediately formed a shield wall, the archers stood their ground and failed to evade the charging Saxon horde. 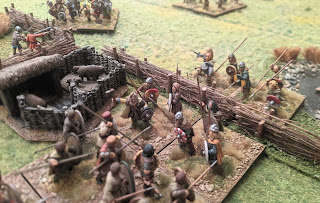 Over on the other flank the Saxons made headway into the village. 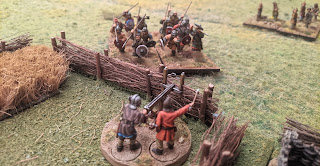 The ballista failed to stall the Saxon advance and was over run in short order. 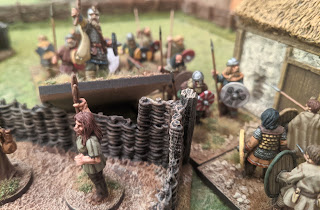 While the militia stubbornly held on to the village a ray of hope appeared with the demise of the Saxon leader but rather than dispiriting the Saxons it had the opposite effect.

A Saxon warband storms towards the baseline, when an infantry unit exit the table in Neil Thomas's rules the enemy must immediately withdraw two units to represent the morale effect of enemy in the rear and looting the camp.
The British could not withdraw two units without the Saxons being able exit another unit which would reduce them the two units which signifies a defeat in the rules. 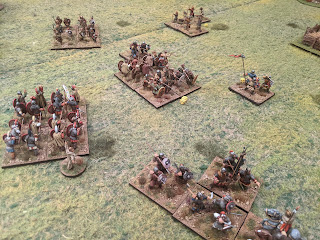 A well fought game by Matt, aided also by some abysmal dice rolling by yours truly, two casualties from my cavalry in five turns, really? Only the one militia unit in shieldwall could claim any glory, valiantly holding off the Saxon horde from turn two.
No more games here at OHQ for the immediate future my father in law passed away in the early hours of Sunday 10th and we are away for my wife's birthday next week coupled with funeral and other arrangements all games will be at GHQ or via Zoom until further notice.
Harold Walters
1928 - 2021
Rest easy dear Sir.
TTFN 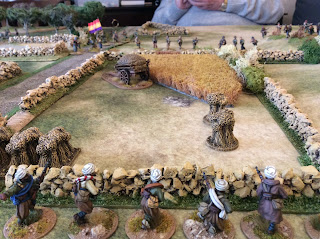 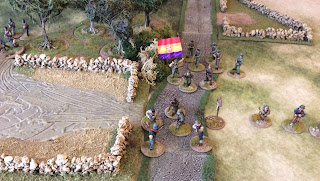 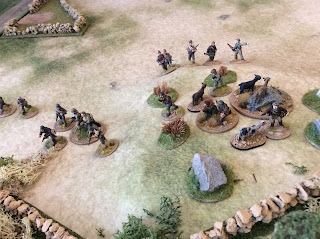 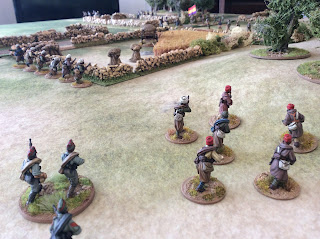