The other Friday saw a return to Spain at OHQ, following the previous weeks visit to the new Battlefront HQ where I was lucky enough to be able to play a game on their splendid terrain which will be on display at Salute and Historicon this year, more info on Dave's blog "Tales From GHQ".

For this outing in the First Carlist War we tried out Neil Thomas's 19thC Europe 1815-1878 Rules. I thought that some of the troop classifications and formations would be ideally suited for the war, some of rules content will no doubt have wargamers aghast, but I think that Neil's reasoning is well described and of value. The morale I found a tad arbitary, but this would be no bad thing in a large game. We shall certainly try them out again but with perhaps a few mods to the morale section, no use is made of squares, whilst rarely needed in the later period, I think they are neccessary for the Carlist War so will add some stats in for them too for the next game. Here is a small photo montage﻿ 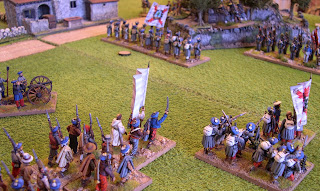 Meanwhile on the left the Carlists advance against the Christinos 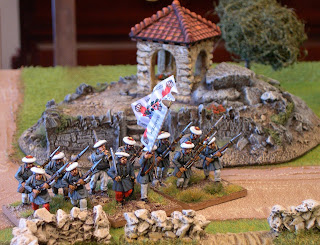 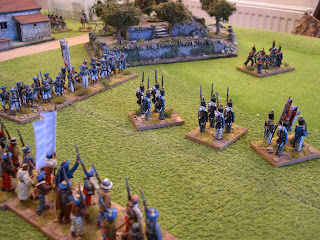 Fighting on the right goes in the Carlists favour, the remaining Christino batallion takes flight