Last night at OHQ we had another Spanish Civil War set to using Triumph and Tragedy rules, both sides entered the table from turn one based on the unit order system used in the rules. The Nationalist forces were stronger in figures but lacked any automatic weapons, which with my usual dice throwing was probably no real disadvantage. The Carlist units using the fast move order, quickly seized Casa Rawnsla but did not have time to fully take advantage of the cover provided due to the timely arrival of two Republican International Brigade units, a prolonged firefight ensued but with the arrival of an Anarchist unit and poor marksmanship from the Carlist Militia units the tide turned against the Nationalists. Meanwhile on the right flank the poor quality local Falangist militia sat safely behind a wall taking shots at the advancing Anarchist militia, giving covering fire to the Legion unit attempting to turn the flank. Legion v Militia you would think a one sided contest and yes it was, but this is me of course. With the Carlists all but decimated on the left and the loss of the Legion on the right a win for Dave and the the Republican force was recorded. I am not sure if we were playing the rules correctly but it did seem that rather than retreat units would if they passed the required  morale test would stand and continue to take the punishment, or perhaps it was just how the dice fell. Here is a little photo montage from the game, sorry if they are a little fuzzy but they are in action shots after all :~) 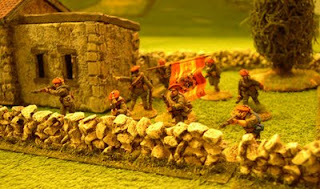 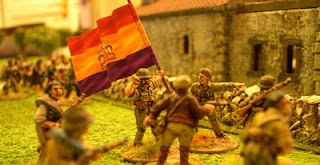 But not before the International Brigade arrive to spoil the party 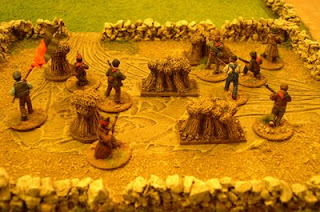 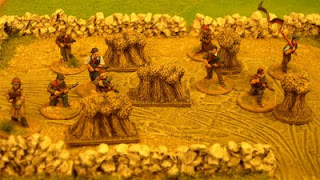 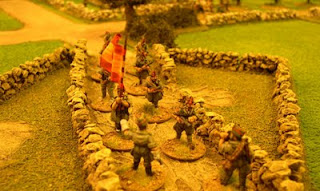 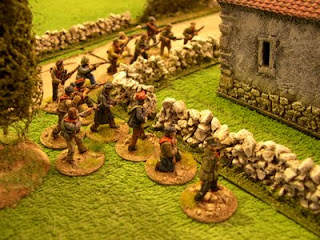 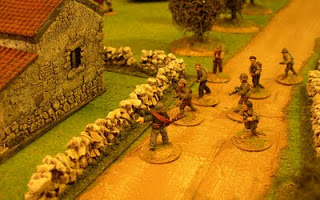 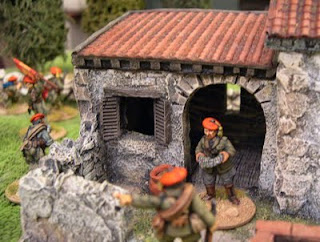