With the weather forecast being typically ambiguous we decided to go with plan B again, so I dropped my wife at work and continued round to GHQ. Dave had set up a 1940 game, Castle Blandings was there in all its glory. But what was this on the roof? turns out it was a top secret weapon awaiting to be tested upon the arrival of Mr. Churchill 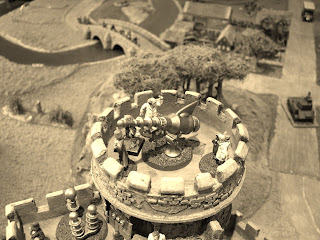 Most Secret Weapon The D-Ray﻿


﻿Some fifth columnist had obviously been at work for the Germans were aware of this experiment and managed to drop paratroops to try and capture the weapons inventor and paperwork. Blandings however was stoutly defended by British army regulars, the Home Guard together with the staff and workers of the Blandings estate and even the guests were armed and put into the fray. 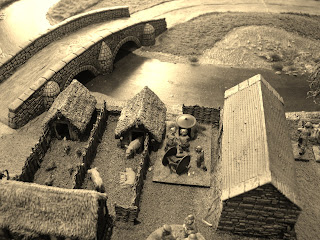 The irregular defenders put up a splendid defence, although their inexperience resulted in high casualties but still the held their ground and held up the advance of the paratroopers, enabling the regulars to fight off a even more nefarious foe. 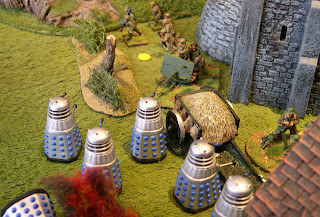 Is there no depths that the Narzies will not plumb to meet their nefarious ends? However even these abominations were no match for His Majesties troops and the new D-Ray. The enemy attack was grinding to a halt but then a lucky 80mm mortar round destroyed the D-Ray, with time getting on and no clear result in sight a draw was declared. There you have it a totally bonkers but fun game, using Bolt Action rules with add ons for the mad bits. No game next week as we are heading for the wilds of North Yorkshire for the weekend and Vapnartak, I will not say weather permitting has 8" of snow in North Dalton didn't stop us last year.

More pics over on Dave's blog, Tales From GHQ, link on my blog list.

Well sort of, Dave was due to come over to OHQ for a Great War game using Bolt Action with amendments. The inclement weather sort of curtailed that, however my wife works around the corner from Dave's so I dropped Di off at work and carried on round to GHQ. Where we had an English Civil War game to celebrate the publication of Dave's rules "A Crowning Mercy", the forces of Sir Marmaduke Rawnfley laid siege to Pyddle Down Manor, a report of which can be found on Dave's blog "Tales From GHQ". Weather permitting the Great War game will now take place this coming Friday.

TTFN
Posted by Phil Robinson at 03:35 No comments:

Readers will note that I say aims not plans, for we all know that no plan survives first contact with the enemy, these in my case (and no doubt included in yours dear readers) is time and the lure of the "shiny". So what are my aims?
In no particular order -
1. Complete my Late and Early Great War figures, guns, vehicles and terrain.
2. Complete my forces for Dux Brittaniarum
3. Add units to my growing First Carlist War forces
4. Maybe along the way add to my Spanish Civil War forces
5. Avoid the lure of "shiny syndrome"

How this will pan out with commission work and family matters and what the plethora of figure producers put out  to tempt me with must of course remain an unknown at the moment.
Watch this space as they say.

Over Christmas I managed to complete the splendid Grand Manner wayside shrine, a wonderful Christmas gift from Dave. 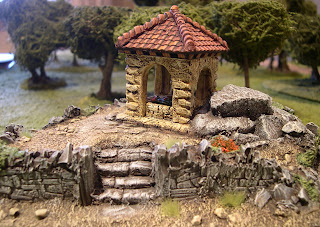 Yesterday I travelled over to Bickley Towers for the first games of the year, as my wife only works around the corner I got there early so we were able to play two games during the day. First off was a French Indian Wars game using the popular Muskets and Tomahawks rule set, this being our first outing with the rules we only had small forces. The British aim was to burn the Indian village, the Indians obviously to stop them, my two units advanced cautiously along the track through the woods.

Before too long contact was made with a returning Indian hunting party, a prolonged musketry dual took place with the superior British firepower gradually taking its toll and the British winning the day. I was rather bemused as to why the Indians did not close to hand to hand, it turned out that the Indian chief was an innate coward!
After a rather splendid lunch provided by Sue we played a 1940 Britain invaded game using Bolt Action rules, this saw the gallant British defending Blanding's Bridge against capture by German paratroops. After some poor shooting from both sides early in the proceedings things started to hot up, helped by the fact that we forgot to roll for damage from the mortar hits and took the casualties for each hit scored! In the end casualties were about even but the paratroops did not enough men to take the bridge so they retired the field.

There will not be a game next week as we plan to deliver Dave's latest rule set A Crowning Mercy﻿ to Caliver Books. The week after we plan to play a Great War game here at OHQ, as I mentioned in previous post.
TTFN and Happy New Year