Last night at OHQ, I ran a game using "Winter Sports" an excellent article in the Lardies 2010 Christmas Special by Richard Clarke(some great reports here from Sid Roundwood http://sidneyroundwood.blogspot.com/search/label/Winter%20Sports) for trench raids in the Great War using Through the Mud and the Blood rules.

However I set the game twenty some odd years later and transferred it to the Iberian peninsular, hence the title of this post, I apologise to any Spanish readers if the translation is out.
The raid chosen was the recce, the Republican force had to identify five of the Nationalist positions and withdraw. The Nationalist position was a trench line and a burnt out hacienda more or less as per the terrain in the article except that I added a olive grove to cover the Republican advance a little, it later transpired that they really did not require any other cover but the darkness of night as the Nationalist sentries were less than observant (IE. asleep I think).

The Republican player (Dave Bickley) concentrated his attack on the one flank with the olive grove, (note to self never give Dave something to hide in or behind) although this slowed his advance it helped, together with the myopic/sleeping Nationalist sentries, conceal his approach. The Republicans reached the trenches without the alarm being raised and overpowered the first sentry they met. 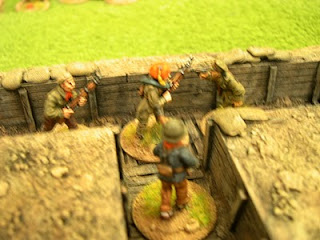 Sorry the pic is blurred, I think however it reflects the sentries spotting abilities admirably. The Republicans then advanced along the trench with the first unit whilst the following unit made its way to the burnt out hacienda, where they located and routed the Nationalist troops holed up there, despite the resulting mayhem the Nationalist whistle blowing points did reach the required number to initiate much reaction from the rest of the trenches occupants. 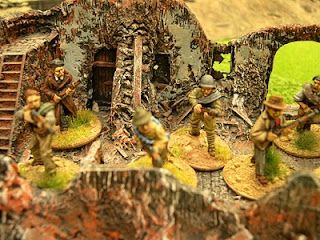 Whilst this was happening the other unit advanced along the trench, where it encountered and overpowered yet another sentry (by this time I reasoned that they must have been Republican sympathisers) 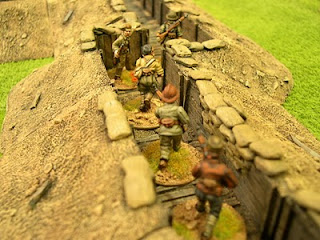 after this they located the Nationalist command bunker, although the officers put up a good fight they were no match for the superior numbers. At last the whistle blowing points reached the point where a Nationalist NCO could be added to the deck, immediately his card was drawn he led his men from the dugout, yes you guessed, straight in the path of the third Republican unit, who in the meantime had overrun the sleeping troops at the MG position. 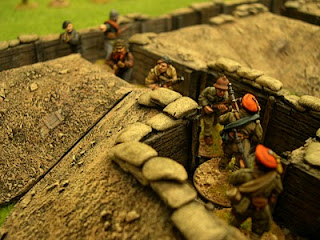 This unit also included the bulk of the Republican assault specialists who gave the Nationalist unit short shrift, the Republicans had now located their five objectives so could now begin to withdraw, with the Nationalists short of one whistle blowing point to bring on reinforcements the game was declared a win for the Republic.