I have done the first bases for the Goths and Roman cavalry, the Goths are from Musketeer Miniatures and the cavalry from A and A Miniatures both with LBMS shield transfers, also a picture of the lanicarii based up. Next bases for all three are underway, busy on paid stuff at the moment though so it will take a while.

The pics are clickable.

﻿Next weeks game at OHQ will be either a late Great War or Spanish Civil War encounter.

Somewhere in Belgium, August 1914. There is a gap between between the allied forces, a British force has been sent to close it. A forward German detachment is already in position at a critical road junction......
This is the scenario for our latest outing with our embryonic early war rules, we needed to address a couple of things during play, but I think we are now in a position to start putting some meat on the bones before our next outing. A small photo montage of the action follows below -


I perhaps made things a little to easy for the British to achieve their goal in this scenario, although if the uhlans had defeated the British cavalry things could easily have gone the other way. The German artillery were the only unit to really cover themselves in any "glory" they even beat off the initial attack of the victorious British cavalry!
As I mentioned earlier we had to add and clarify a couple things but we are almost there with the rules now, just a case of explaining the usual things, but don't expect diagrams of how to make a flank attack.

I have started a unit(?) of the above using A&A figures, I thought that I would put a couple of pics up before Adam's fine sculpting work with the belts gets covered by a bloody great shield. The quiver is made from Miliput with wire spears because of this it is perhaps a tad large, but as I am a wargamer not a scale modeller it will do for me. It is based on the tombstone of Aurelius Mucianus, a trainee lanciarius, he is depicted with a small round shield, although mine will have large legionary ovals, has I am quite taken with the illustration in Osprey's Roman Battle Tactics 109BC-AD313. The use of lanciarii is openly discussed, some sources have them operating similar to early velites others have them behind the line throwing javelins overhead, probably both may have been the case at somepoint in their history. 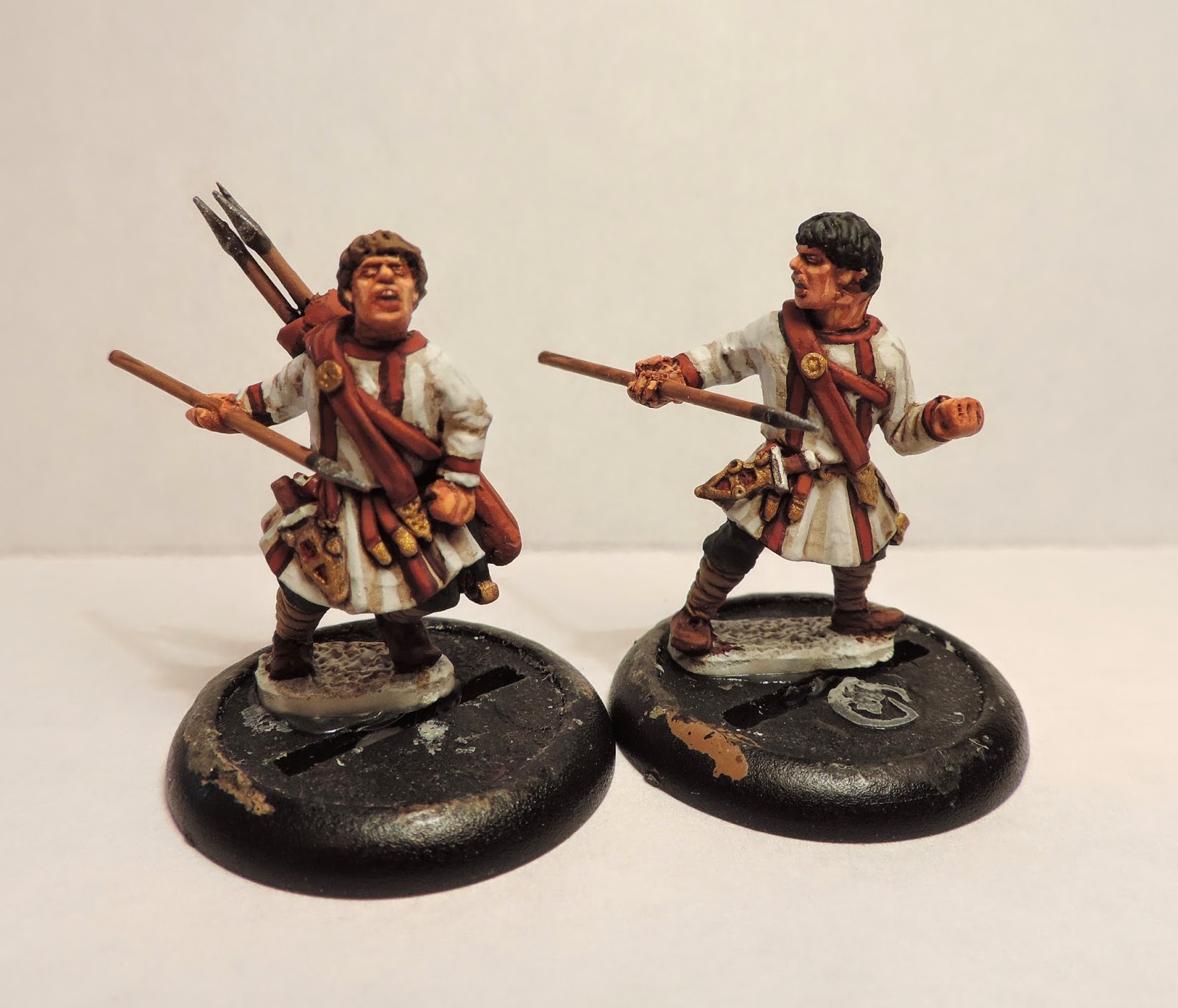 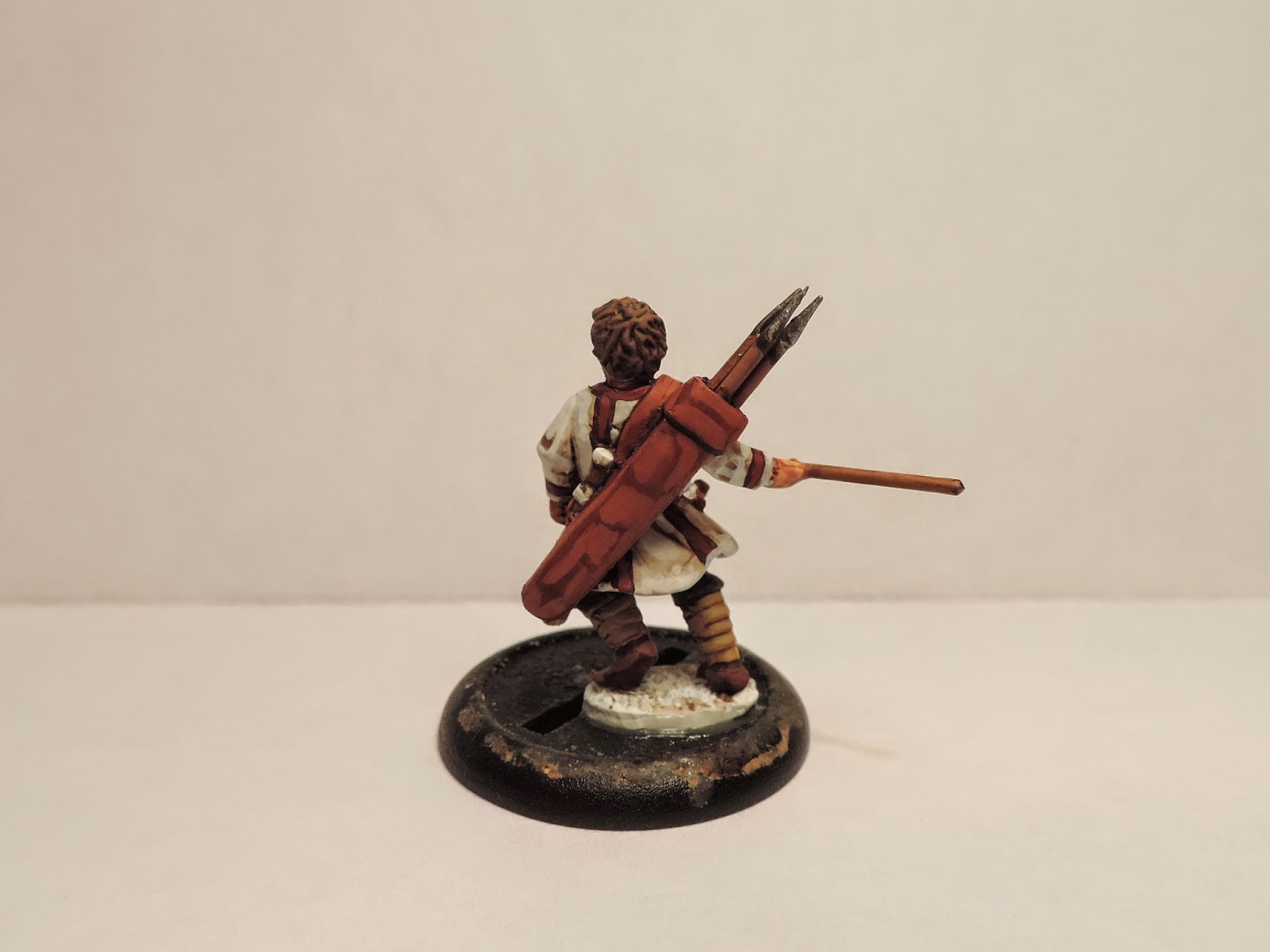 Next up will be some cavalry and the start of some Goth adversaries together with a picture of the above based up for action.

I have managed to finish my second unit for my 3rd Century Romans project, this time an auxillary unit. All the figures are from A&A Miniatures with Little Big Man Studios shield transfers. Based for Neil Thomas's Ancient rules but with the 120mm frontage will also be good for Impetus games too.
Lots going on with health issues family wise at the moment, but hope to make it over to GHQ next Tuesday for a French Revolutionary War game.
Now I must go and catch up on some commission work, another late night looms.

I popped over to GHQ today for another play test of our embryonic rules for fighting actions at the beginning of the Great War, below are a few taster pictures. For a full report on how the Kaisers Kinder fared against Great Britain's Contemptible Little Army pop over to Dave's rather splendid blog. We seem to be getting where we want to be with the basic rules now, a few tweaks for the next game after which we should begin to pad them out more.


The figures are mainly Great War Miniatures with the odd Foundry or Renegade figure thrown in.

The Revenge Of Don Byklos, A First Carlist War AAR

Today Dave popped over to OHQ for a First Carlist War game, with Dave having a 7 hour trip back from Scotland yesterday and me doing three 12 hour days at the motor racing track followed by two hours painting each night on return the weekend, we did not want too taxing a game. I therefore chose to use Neil Thomas's 19thC rules with our house amendments and a scenario from the book, based on the Battle of Alegria this has three Christino line units a skirmish unit and a gun, to win the game they need to exit two units off the opposite table. To stop them in their endeavours are three Carlist infantry units, a skirmisher unit and a cavalry unit, with two infantry units coming in on the flank, dicing on turn two to come on. The game would last eight turns.
Christino Dave AKA Don Byklos achieved victory in turn six, my Carlists letting them blithely past their flank whilst engaged by the other units. On my past form with the dice I should not have put much store in my reinforcements arriving, yes of course they did not appear. Tiredness or bad generalship?  I will let the pictures describe the sorry state of events and you can decide.


All in all a splendid little game, figures by Perry Miniatures, Buildings by Empress and Grand Manner, Walls The Last Valley, Trees K&M and The Last Valley. Pop over to Dave's blog, click the Tales From GHQ link to see some picsw of the splendid games at this years Claymore.
Next weeks game will be over at GHQ, a 1914 game to mark the start of that terrible four year conflict.