A days gaming had been arranged, with our old chum John yesterday. It was Dave's birthday the following day so I took along a little birthday gift, an old HLBSC FT17, duly repainted to represent Lord Emsworth latest addition to the Blandings arsenal, to protect his precious pig  castle. To celebrate this the planned ECW game became an impromptu VBCW game. A full report will appear on Dave's blog, TalesFromGHQ in due course, meanwhile here are some pics of the action from Lord Ems prospective.
﻿﻿﻿﻿﻿﻿﻿﻿ ﻿﻿﻿﻿﻿﻿﻿﻿﻿ ﻿﻿

Someone over on the Lead Adventure Forum requested more shots of the ECW pikemen, so I took three more quick shots prior to packing and posting off to the customer earlier today.
Thought that I would add them to the blog too. 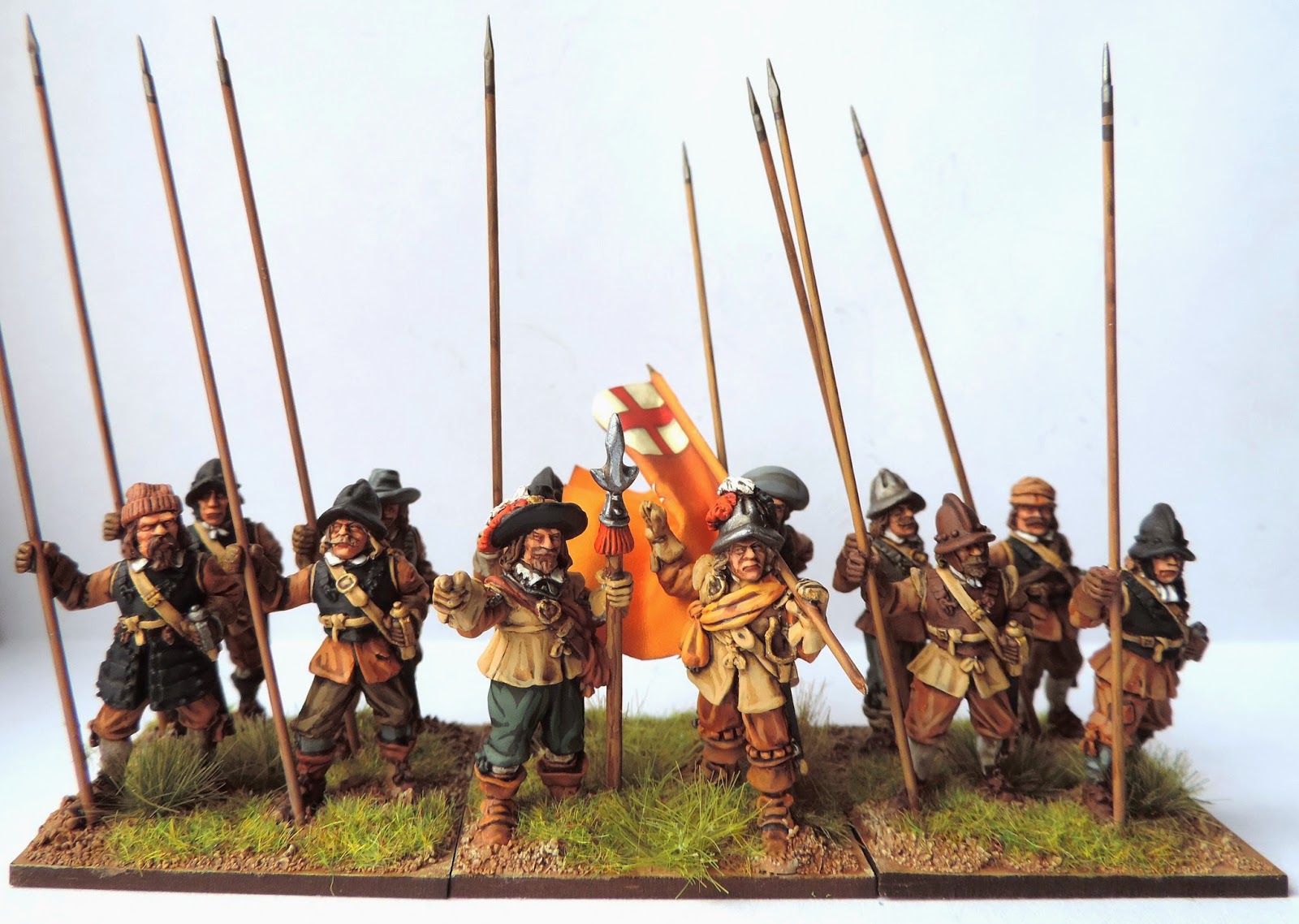 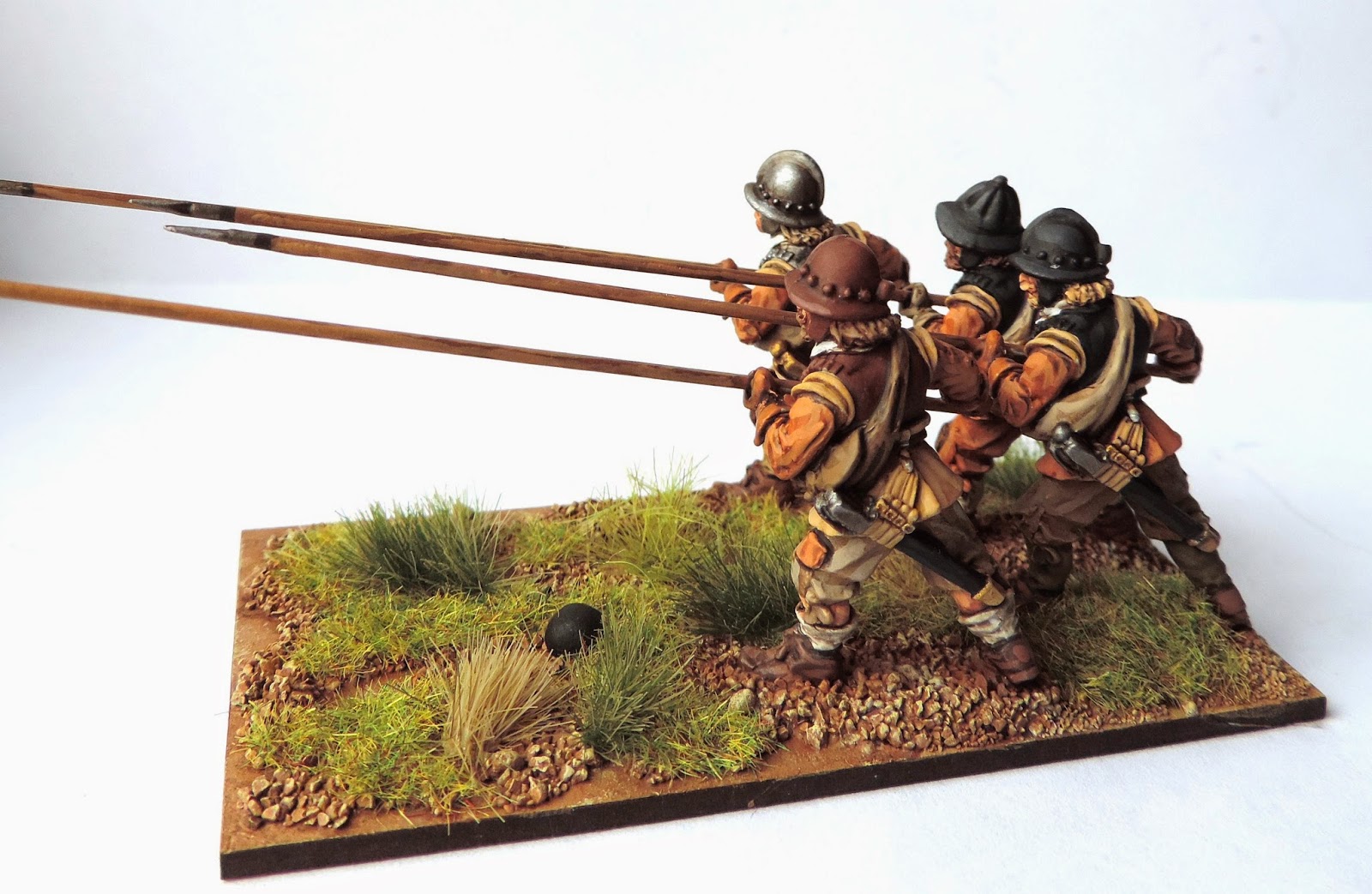 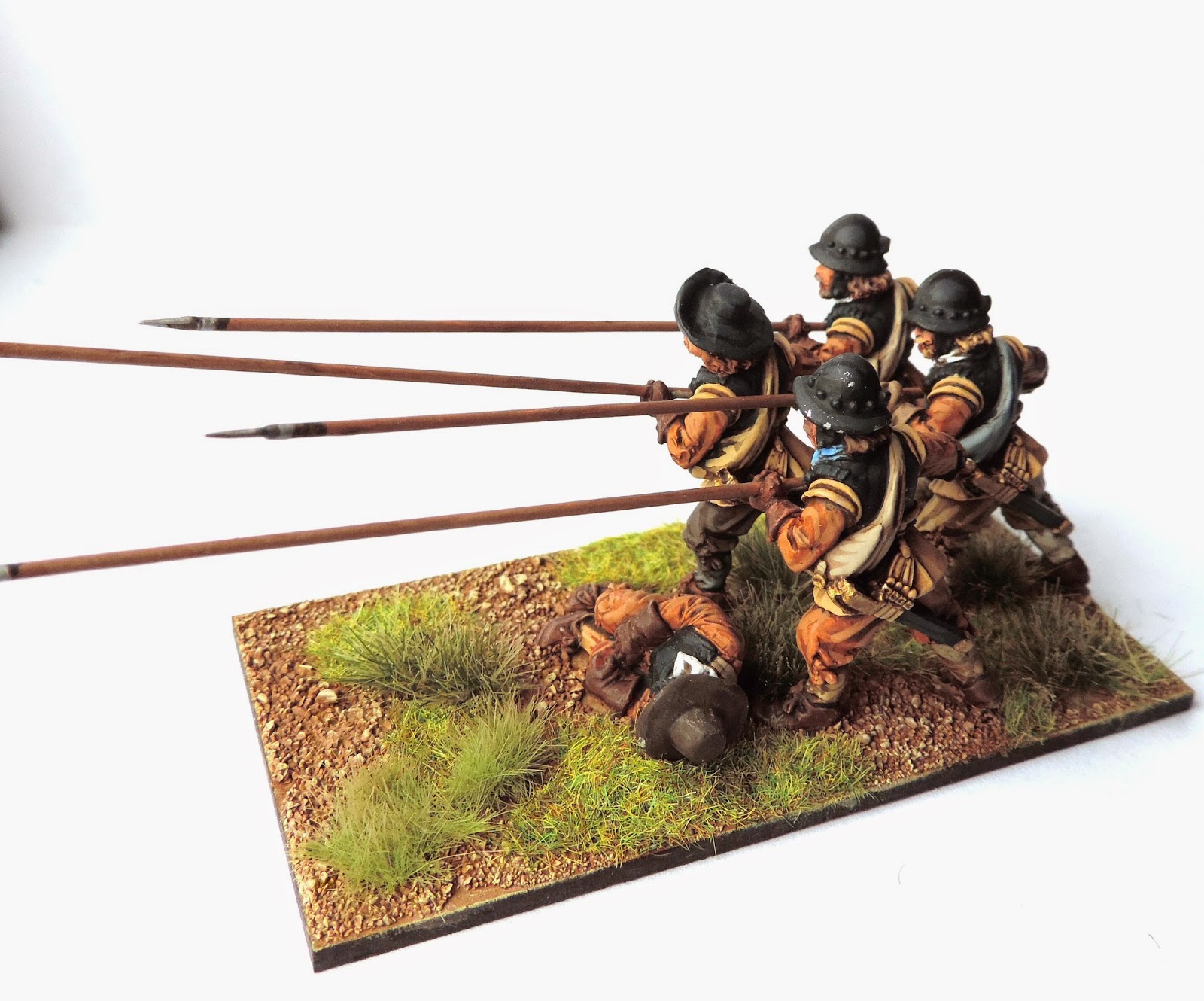 Thought I had better put something up, my last post was on my other blog that follows goings on in our fictional region of Rhanzlistan, True To The East, further details of our last outing here can be found on Dave's blog Tales From Rhanzlistan 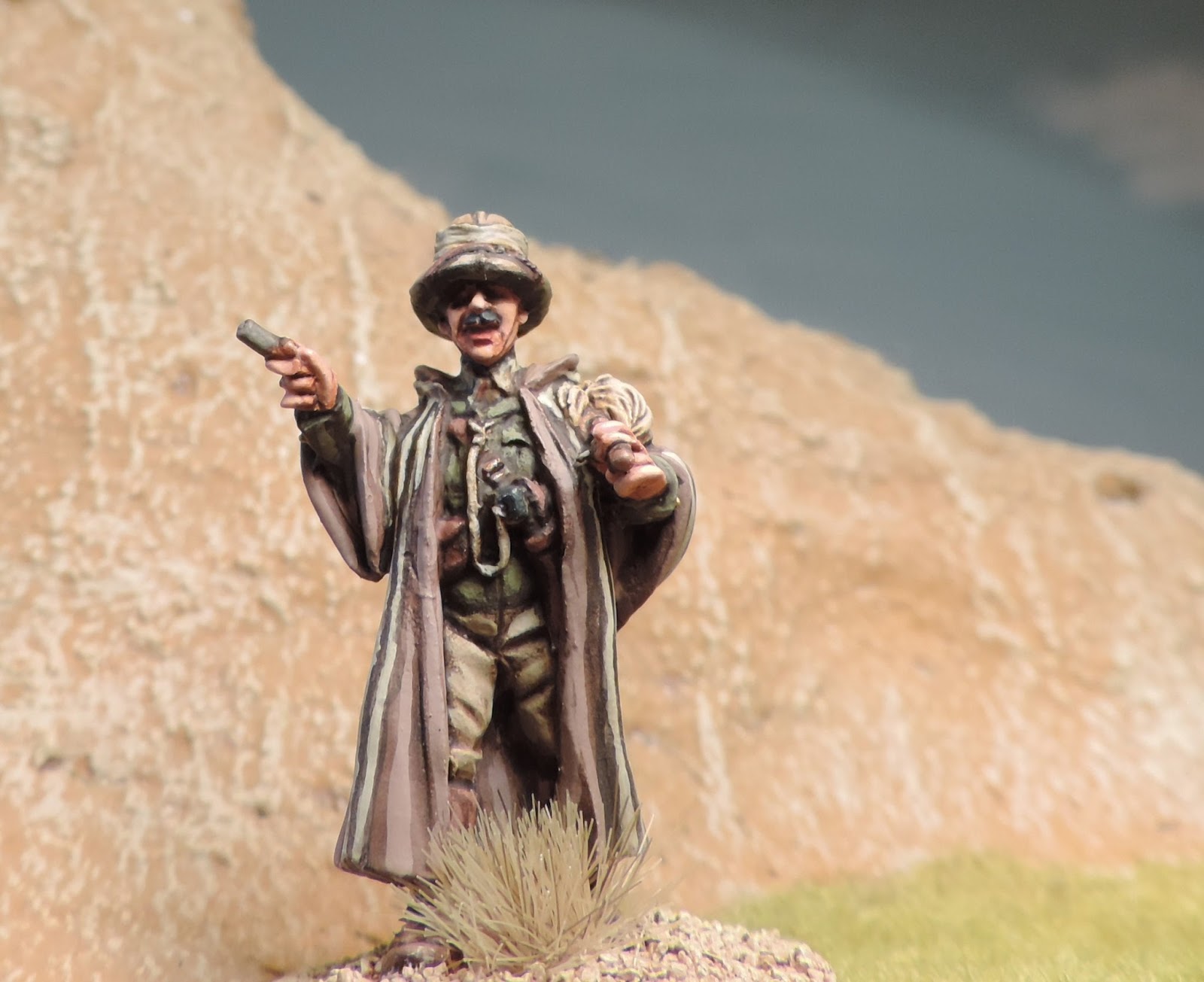 This is an Empress Miniatures figure for a Melanoma charity, kindly sculpted by Paul Hicks and cast up by Griffin. These are still available should you wish to support this worthy cause,  http://www.empressminiatures.com/userimages/procart97.htm 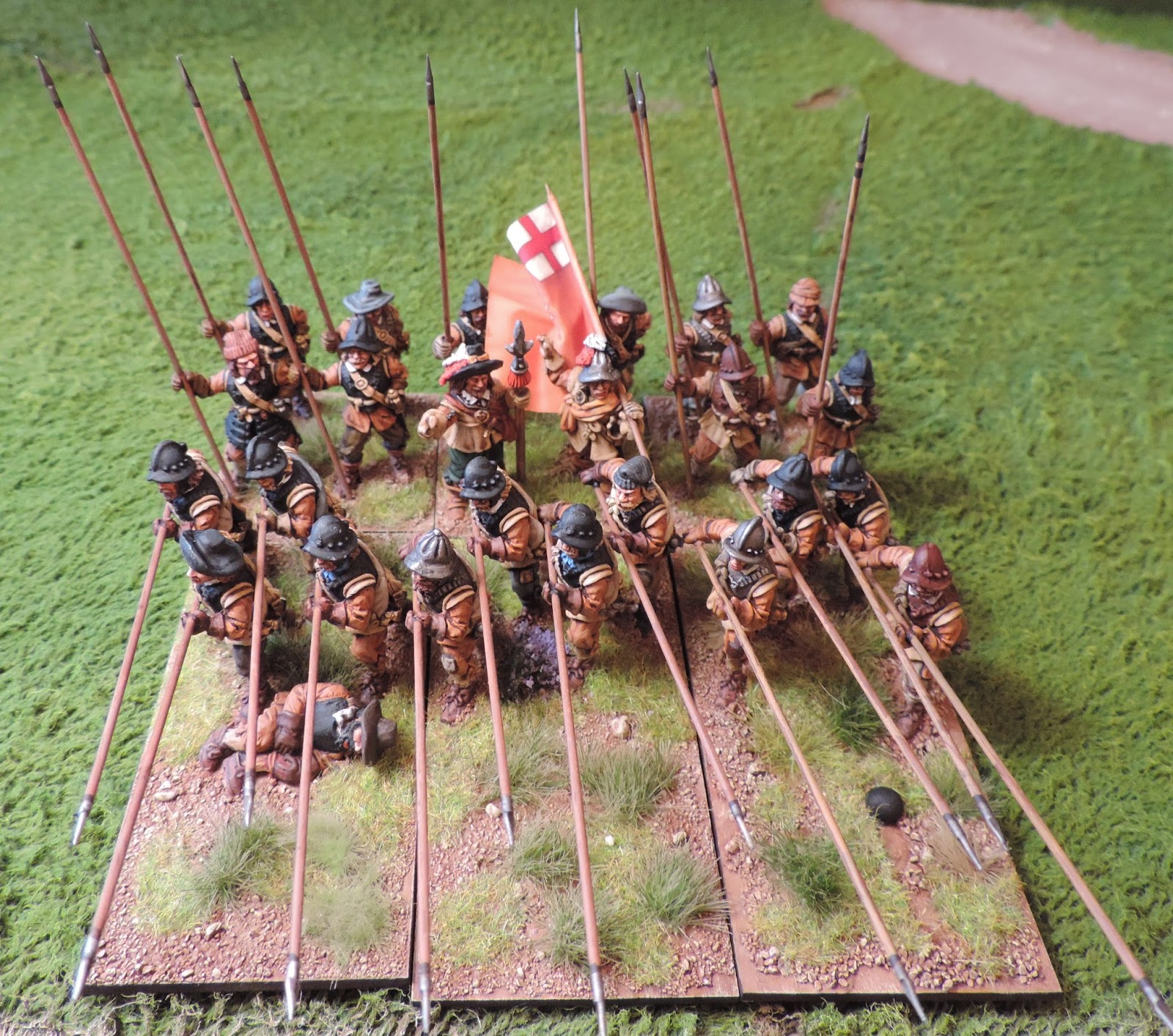 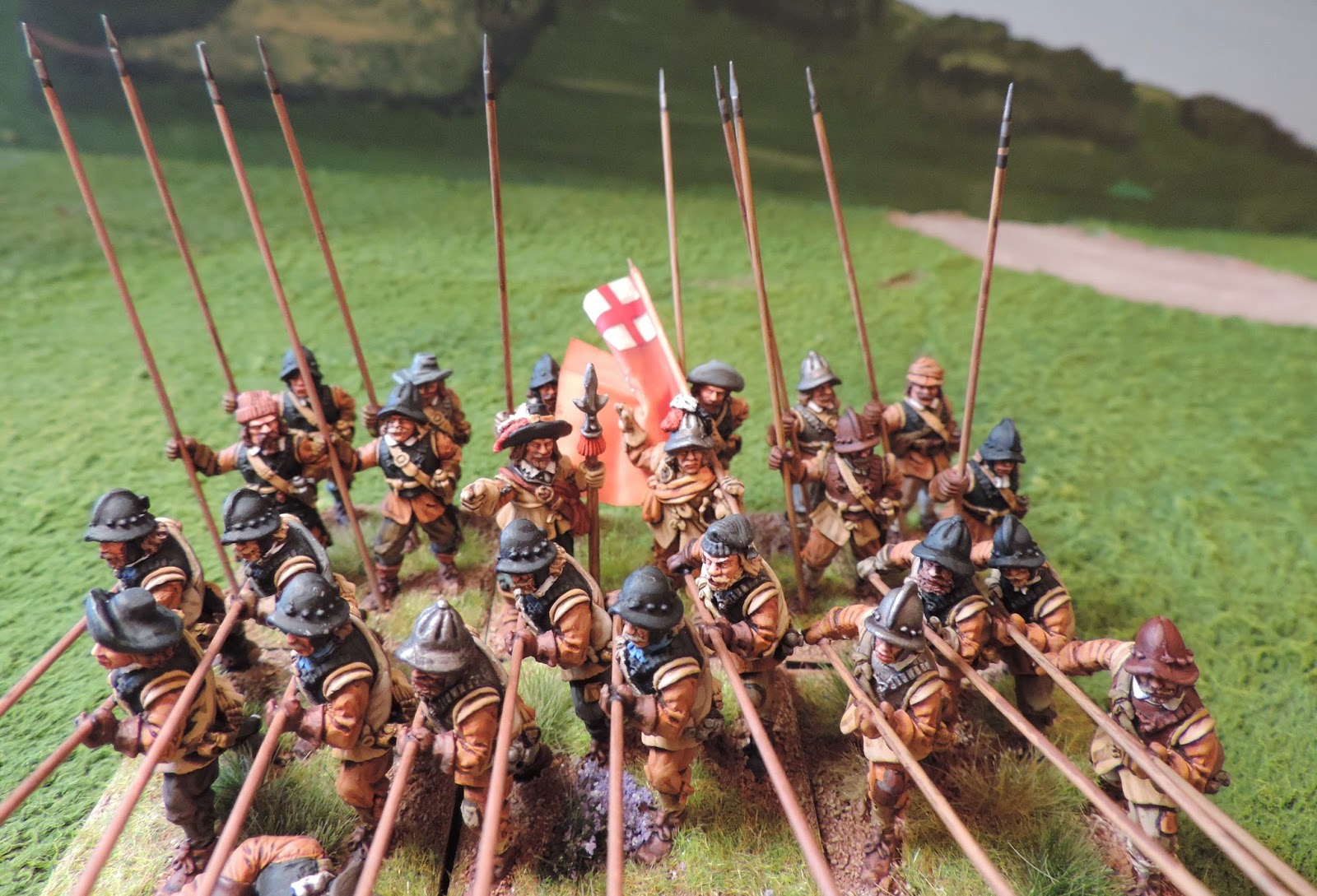 This weeks game will again take place at GHQ as our old chum John is popping up from Cheltenham for a days gaming, I will take my camera and post a report on the days events. Also attending a wedding on Saturday, then Partizan Sunday so doubt I will post until early next week though.

Well from the start the Germans did not do very well, the gas attack caused no pins and a single casualty to the British manning the 18Pdr gun. The bombardment of the British rear again caused little disruption, the British obviously making use of the captured German communication trenches to advance along, a few pins and no casualties, only managing to delay the arrival of the North Staffs bomber section by a couple of turns. Not as though they were really needed the sections already in situ more than holding off the counter attacking German forces as we will see.
The British dawn bombardment on the approach route of the German attack caused a few pins only, not holding up the advance too much, what did slow the advance was the decision of the A7V commander to not risk crossing the hedge and detouring around Ville Hazeton. The German section with the captured Lewis gun was sent to the left flank to support the flanking section when it arrived, meanwhile the remaining sections advanced towards the hedgerow with the second wave of Stosstruppen close behind.
There appeared to be a little confusion on the German side, the flanking section appeared on the wrong flank and way short of the British lines, this left the Lewis team a little redundant having to await the arrival of the A7V to shelter behind, not wanting to risk an advance against the British section and Vickers gun which had taken up residence in Shrapnel Villa.
Deciding that time was against them the Germans left the cover of the hedge before the A7V had got up and commenced their attack on the British lines, the first wave took high casualties from the British 18pdr, luckily this early success by the 18pdr was not repeated, unfortunately this was not the case with the infantry section whose marksmanship harked back to the early days of 1914.
The Germans got a lucky break with the drawing of an event cards that allowed one unit an extra move and one unit to rally off a pin marker, sadly this was tempered with a low ammo card which allowed the British player to play it on the A7V which meant it could only fire at under half range.
The Germans could make little headway losing horrendous casualty to continuing accurate firing from the British, with further support unlikely due to British pressure on adjoining sectors and their right flank now in the air the German counter attack was called off.
Pictures with captions follow

﻿﻿
﻿A word on cover, the shell cratered middle board provided soft cover for the attackers if they had not moved when fired on, likewise for the British in their half of the board, Bois Hazle providing soft cover all the while though and Shrapnel Villa hard cover of course.
All in all a rather enjoyable game, even for me the German commander, the next game will see the British advancing again into the green fields and on to victory?
TTFN
Posted by Phil Robinson at 07:45 2 comments: 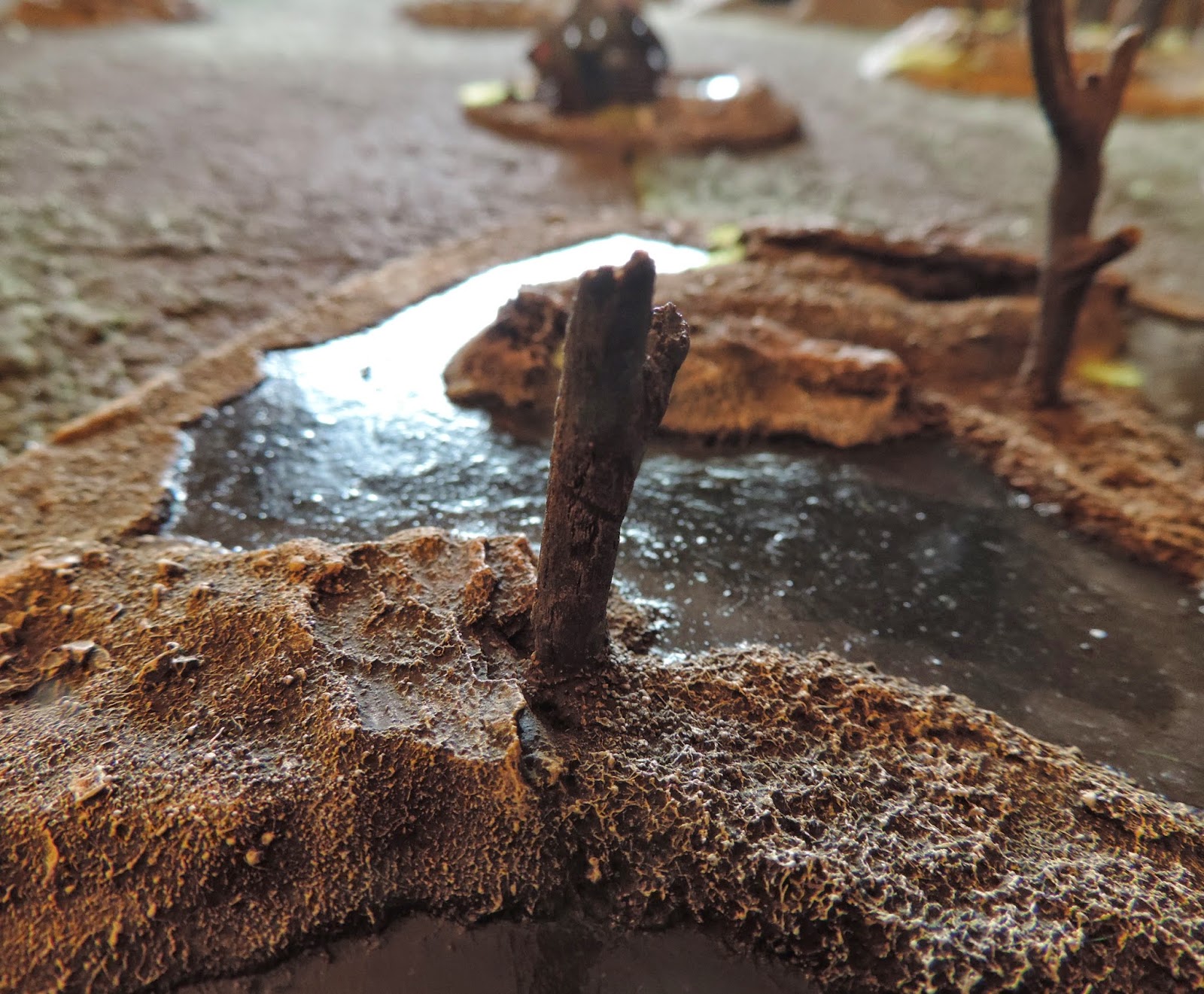 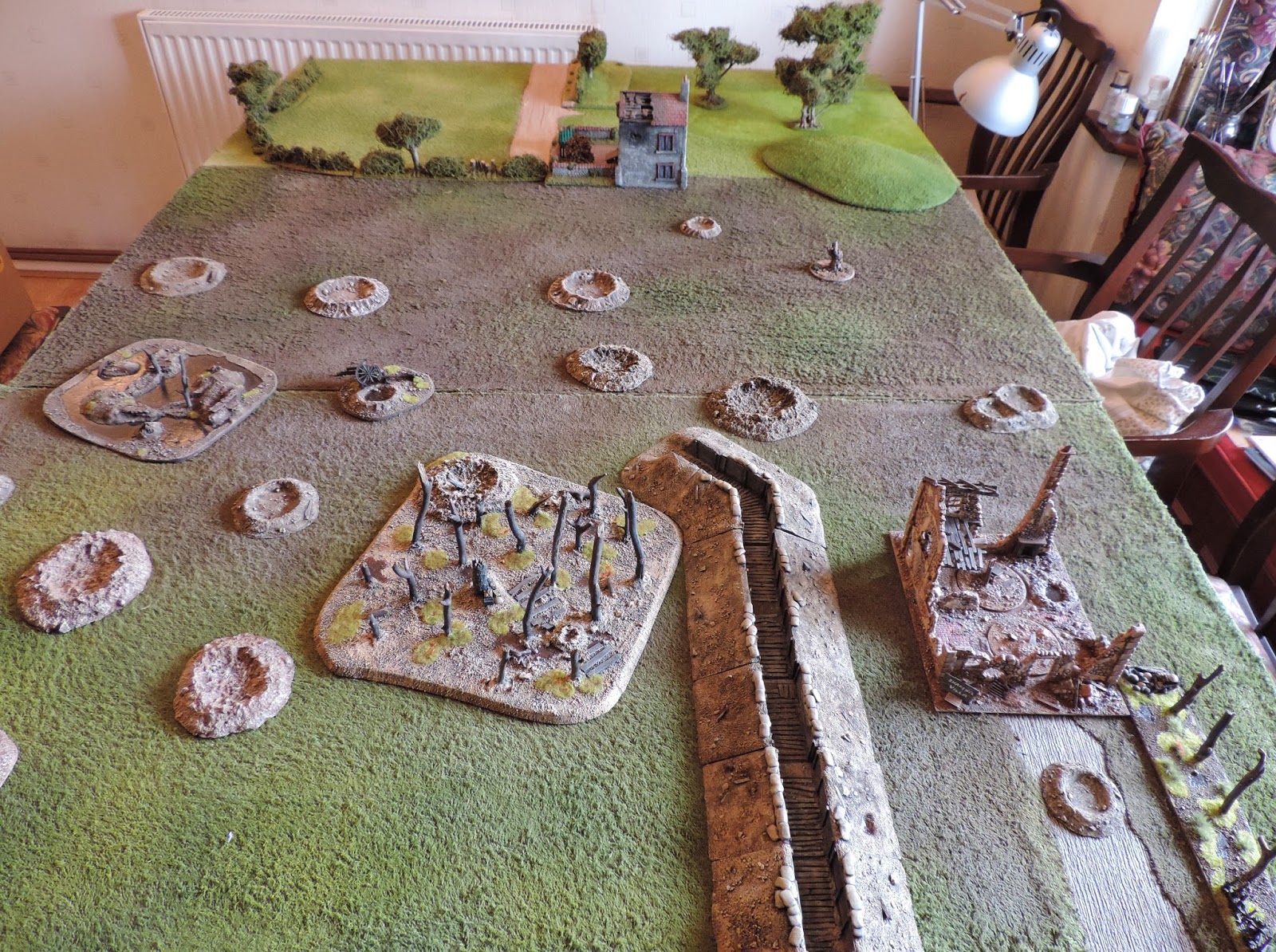 These will be diced for from turn two plus a D2.
Due to the German bombardment units wishing to enter the table must dice as if they had been hit by a preliminary bombardment and any pins received taken into account when taking the order test to arrive.

The British dawn bombardment will hit in turn two on a D6 throw of two or more, in turn two any German units within twelve inches of  their table edge will dice as if they had been hit by a preliminary bombardment. If it does not arrive until turn three it will hit units between twelve and twenty four inches, if the bombardment does not arrive in turn three it is assumed that the runner did not get through and it will not take place.

The gas attack will take place in turn one before any order dice are drawn.
Supporting units can dice to enter on turn two, one unit, though not the armour may be sent on an outflanking move, this will dice to enter on a specified flank on turn three, this must be done before any other German units are given orders, it will throw a D6, 1-4 it will enter 24” in from the German table edge, 5 or 6 36” in.

Be sure to visit later in the week for a full report and pictures.

Setting the scene for the game


Following the successful attack of the first battalion North Staffordshire Regiment near Rawnslie Les Bains, the German High Command have ordered an immediate counter attack to regain this strategic position.

The initial assault will be carried out by the 48th Infantry Battalion, support in the form of Stosstruppe and armoured units will follow.

To prevent the reinforcement of the North Staffs an intense artillery bombardment of the British rear positions will take place, to further support the counter attack a gas attack on the North staffs position will also take place.

The North Staffs will have to make use of any available cover and hold off the inevitable counter attack until reinforcements from the Royal Fusiliers can be bought forward, luckily a Vickers machine gun section and an 18Pdr gun have already been got forward and a runner has been sent to request an artillery strike on the position of the suspected German advance at dawn

Check back tomorrow for more details.

Just a short entry to post up pics of the completed pieces started last week, these will feature in our game next week using Bolt Action with Gajo Games house rules and the addition of an event card dice, I have revised the air attack rules as I thought the rules as written were too deadly for World War One, I have also added rules for gas attacks based upon the ones in the Warhammer Great War supplement "Over The Top".
Be sure to pop back next week to read about the Counter Attack at Rawnslie Les Bains. 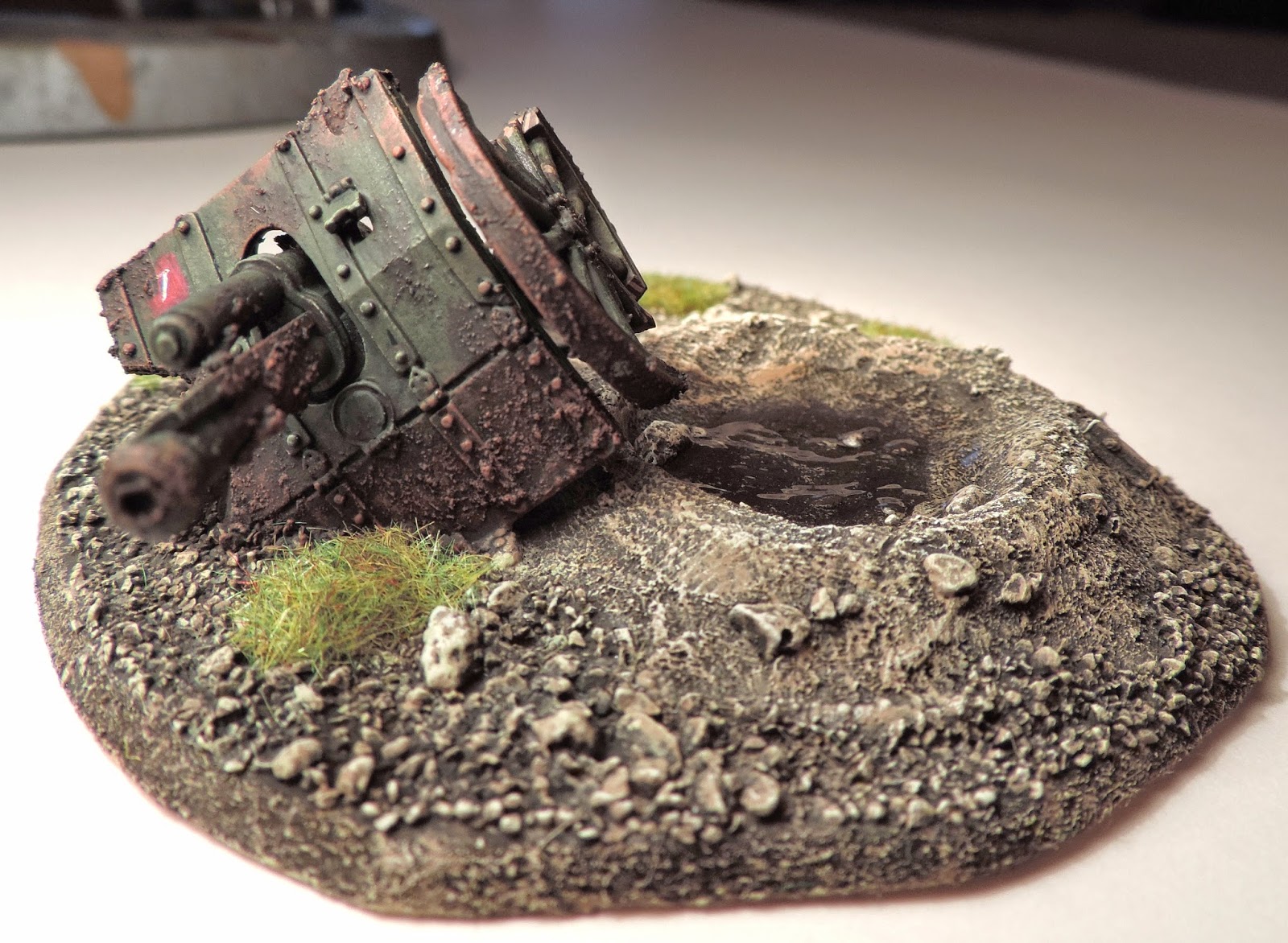 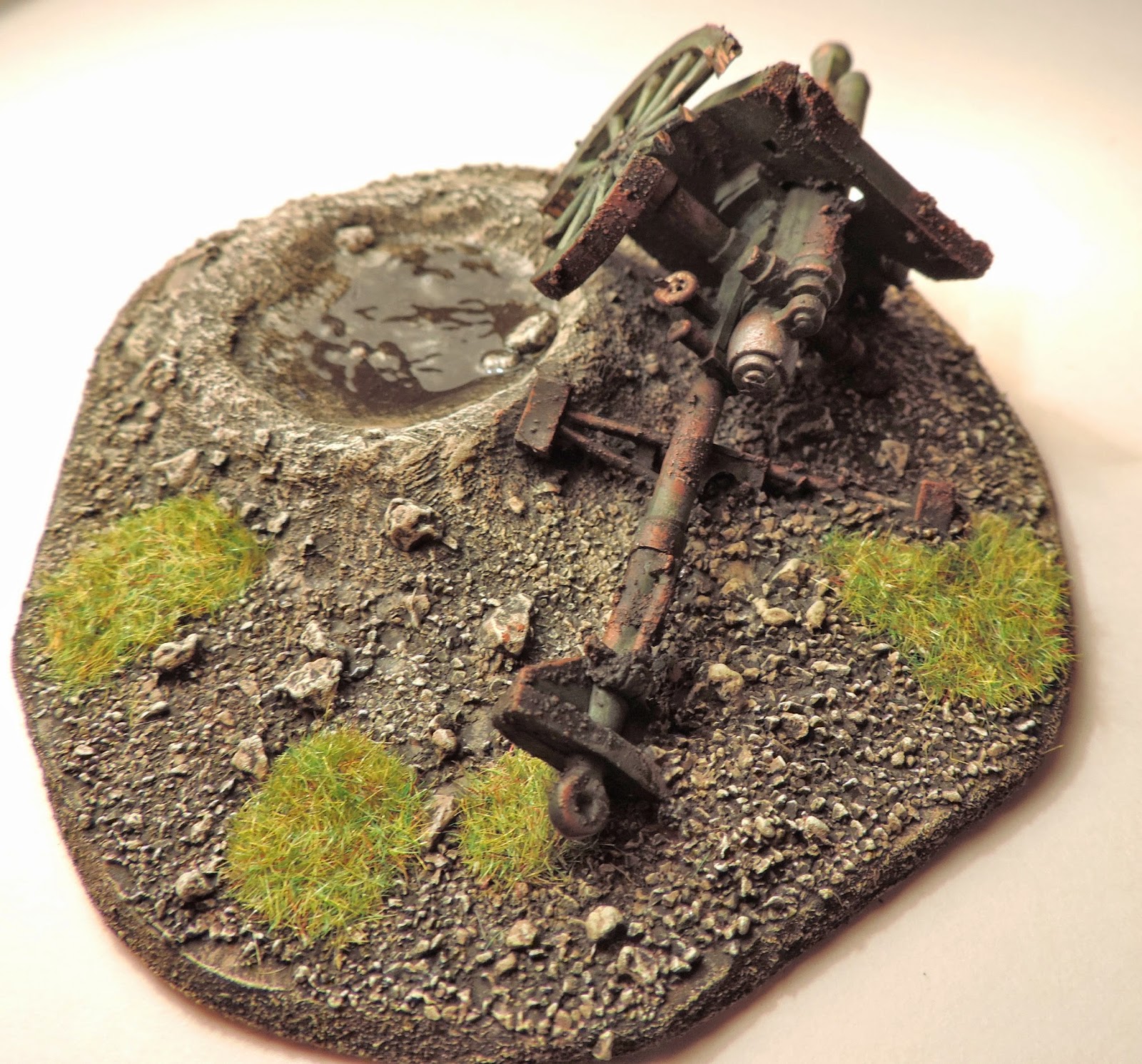 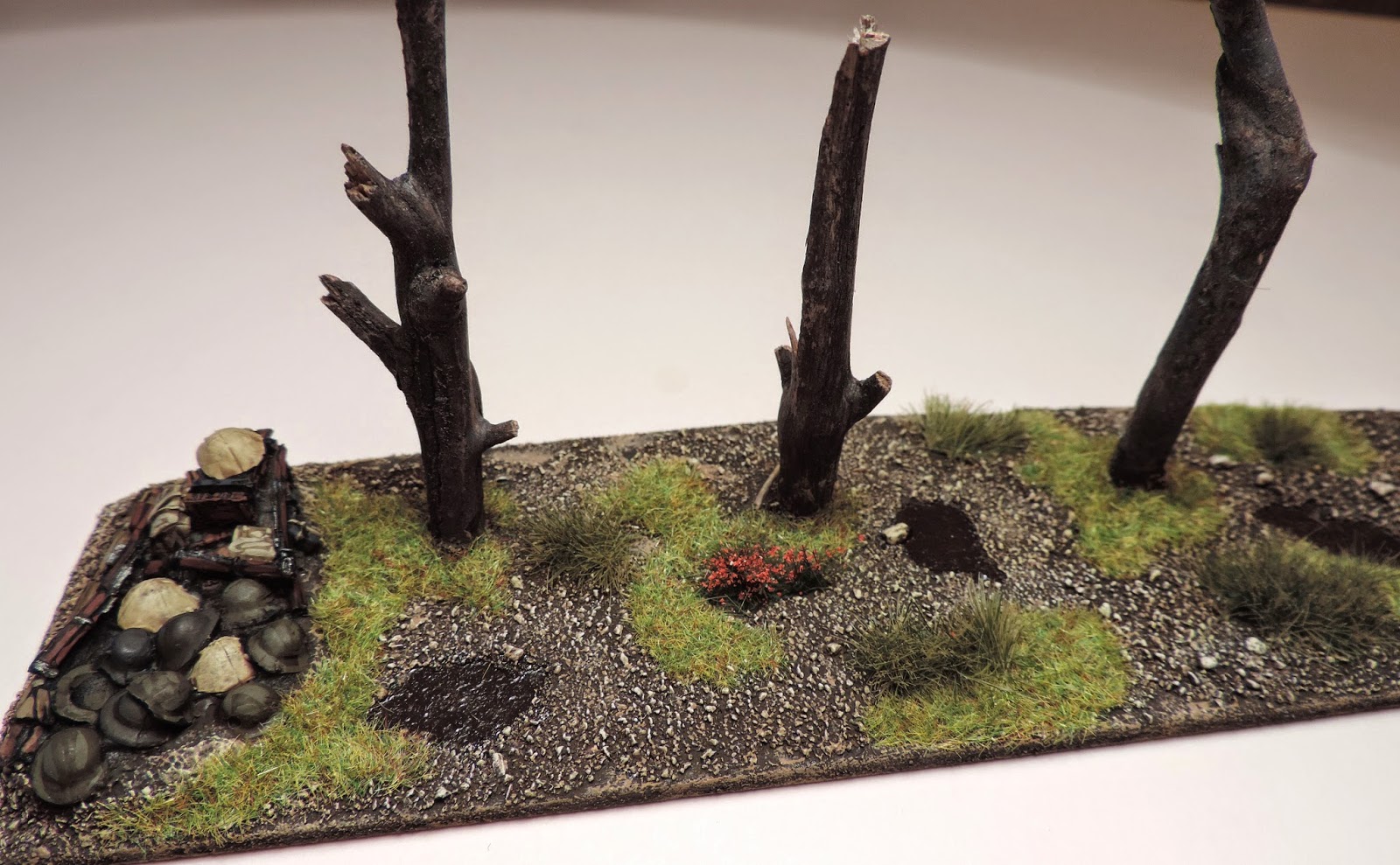 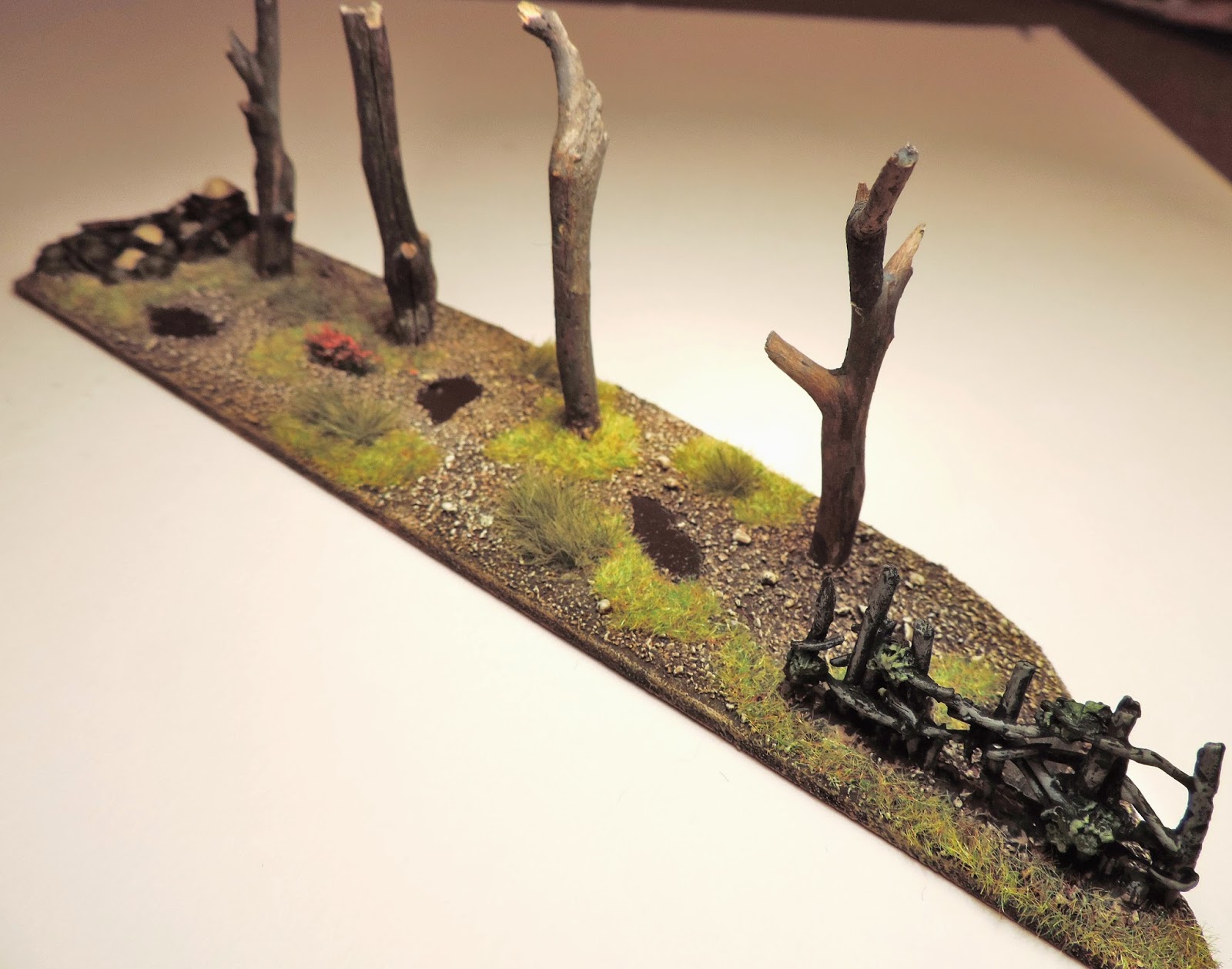 In between figure painting this week I have modified a terrain board that had a fixed hill on it, this made storage awkward and limited its use in games. I decided to remove the hill and add a drainage ditch so that the board could still have some sort of obstacle if required. 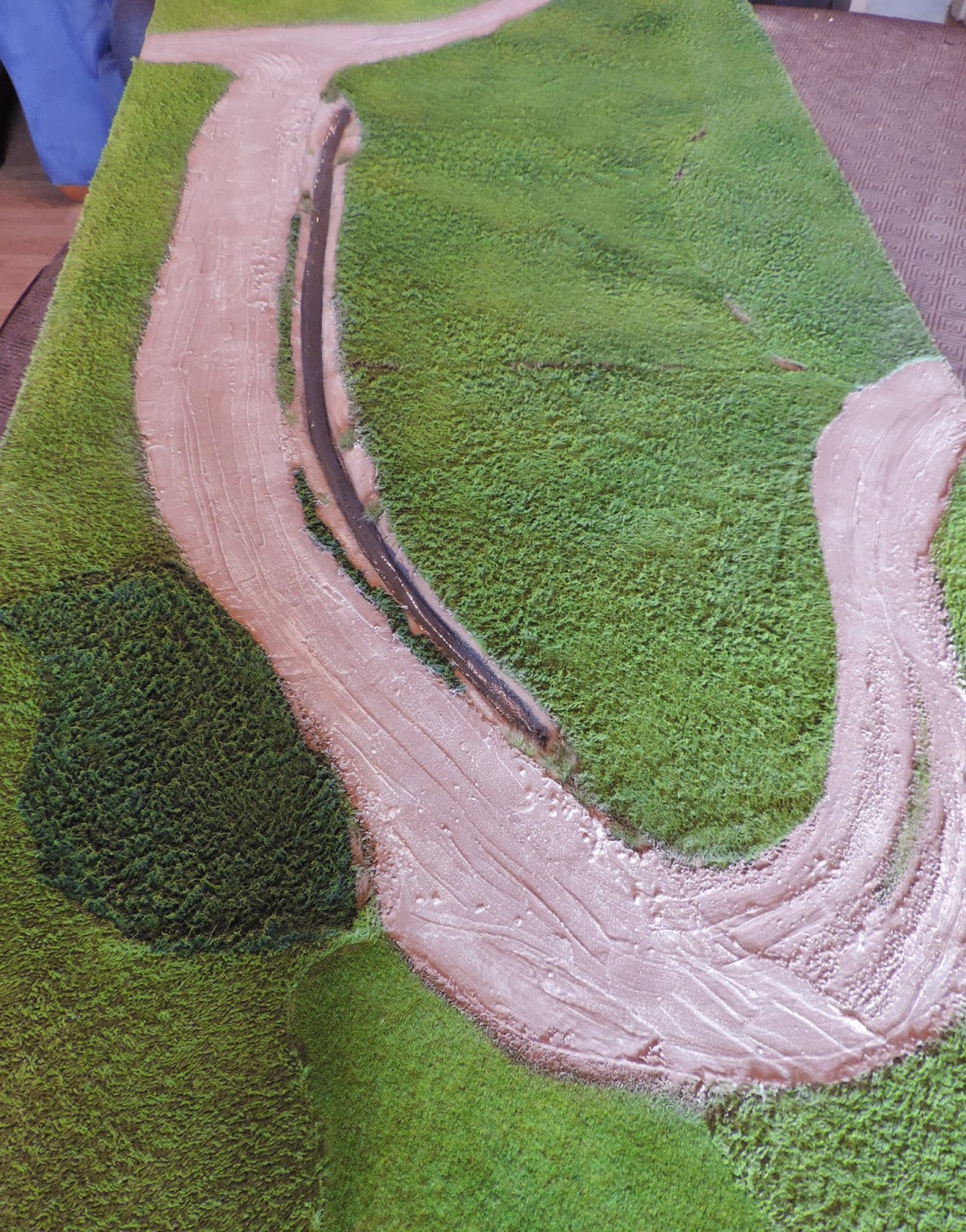 The dark green piece used to be a small hill, well a lump really that looked a little silly, to right of the ditch is where the hill stood with an escarpment running down to the road, I am hoping to salvage this by gluing to a piece of MDF at some point.

I have also started work on two terrain pieces for our Great War games, a destroyed gun and a shattered tree line for the road side, the gun needs to be weathered yet. The trees are Woodland Scenics dead fall, the fence piece is by Irregular, love this piece and fit it in anywhere I can, the pile of helmets etc. are from Grand Manner, both these need to be painted and I will add a little bit of greenery. 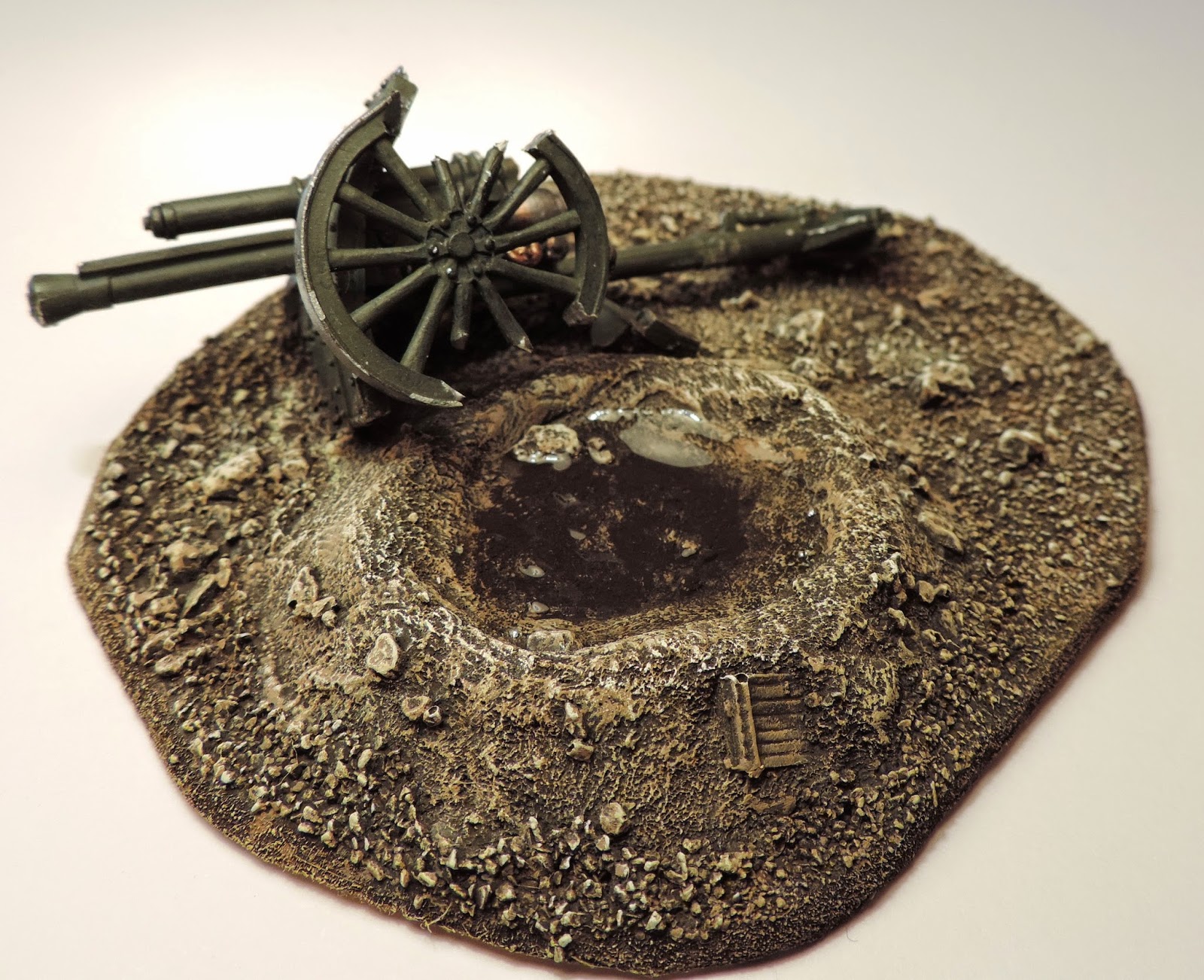 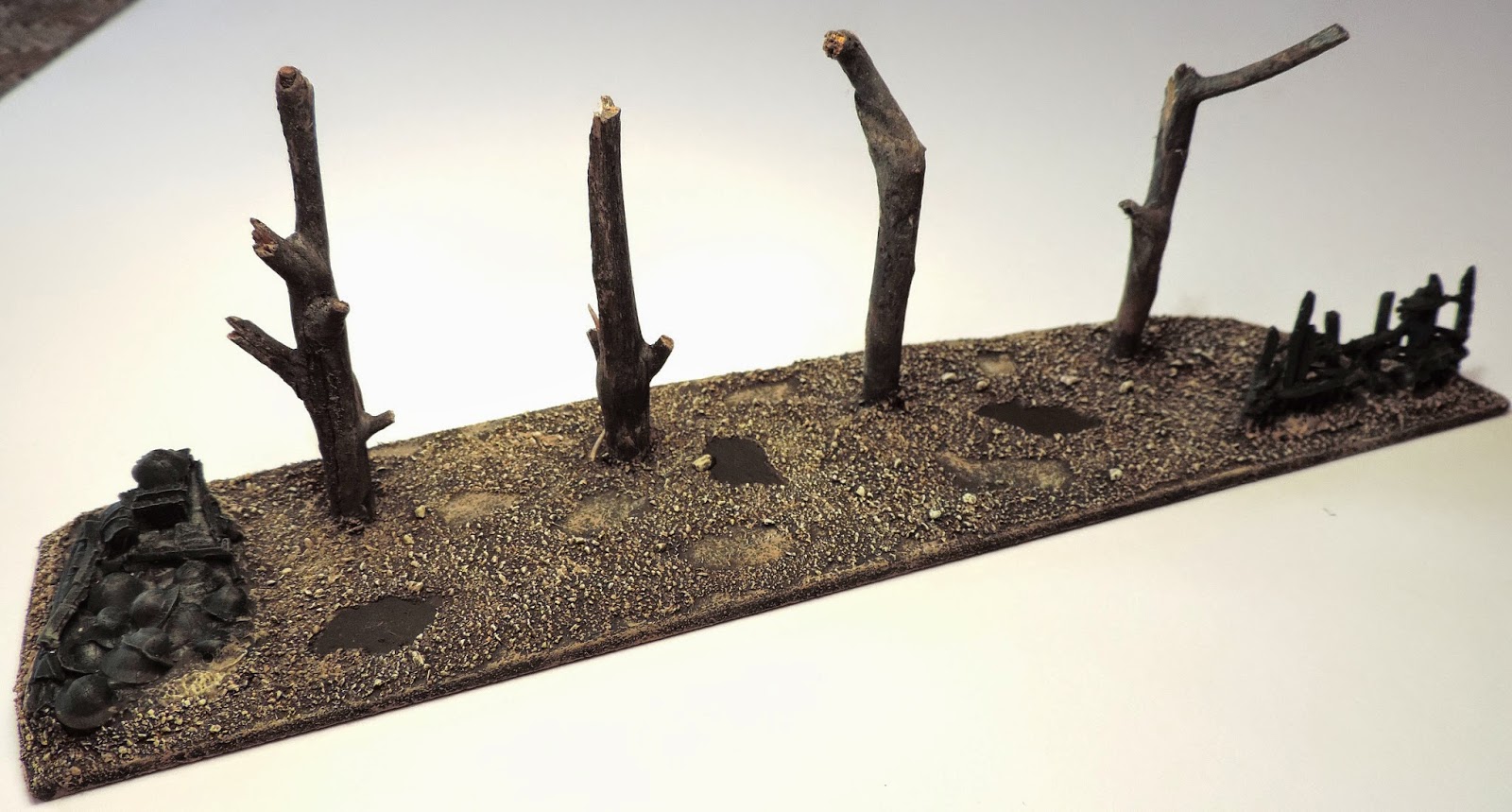 This week besides commission figures I have also finished my Great War British 18pdr and crew, the other figure that comes with the pack from Great War Miniatures will be put on the ammunition wagon base. 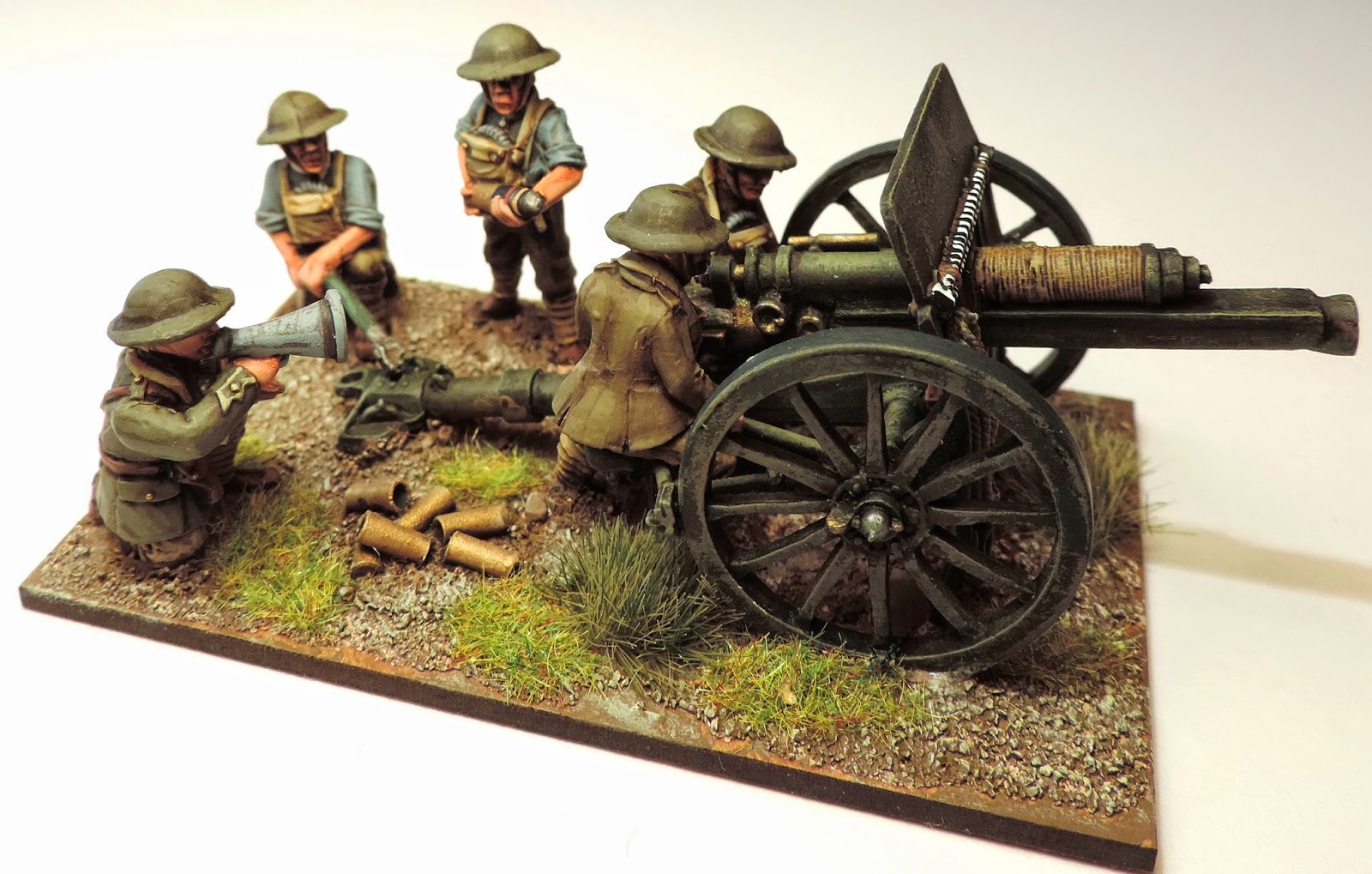 Lastly I have redone the site background to make it look a bit more military and changed the header photo, I hope you like the changes.