Thanks to the kind weather we finally got to play our Great War game using Bolt Action rules today. Very well it went too I thought, I was certainly able to get into the game more than I do when using Through the Blood and the Mud for the reasons stated previously. The objective of the British raiding force was to take out a German bunker, which being on high ground was a good vantage point for the Germans to observe the build up for the next "Big Push".

The defending German force  consisted of three 9 man rifle sections, one with a captured Lewis gun (regular), one Granatenwerfer team and in the bunker a MG08 team and a sniper. There was also a reserve of a 9 man assault section (veteran), which could attempt to enter the table on the turn designated by a D6 throw, in this case it was turn 4 of a 6 turn game.

The amendments for the rules were from here GAJO Games Blog, I also lifted the spotting rules from Kamfgruppe Normandy has I don't like the Bolt Action method of sticking your head on the table and seeing if you can see a head or torso, a man could have his eye out.

A preliminary bombardment by the British saw the Germans with one casualty and three units with pin markers, the first turn saw the Germans testing to get rid of these whilst the British made their move onto the table. Initially the Germans caused a fair few casualties, except the myopic sniper who only managed to take out one NCO, as the British got nearer the Germans firing when you thought it would get better actually got worse, whilst the reverse was true of the British, Dave asked before the game do the British get a plus for 15 rounds rapid, this is 1918 not 1914 I said, you have the Lewis for that, it appears I was wrong. The German reserves were not able to enter on turn four not appearing till turn 5 when it was to late, the British had already stormed and taken the bunker and the rest of the Germans routed, dead or captured. We will certainly give Bolt Action another try for this period. 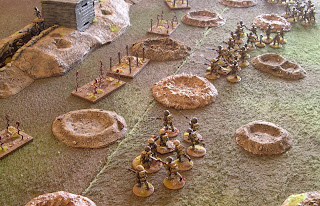 The Germans Give Fire 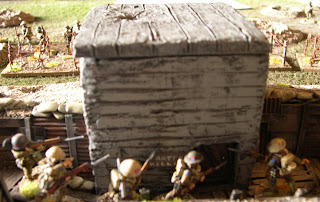 And Storm The Bunker