Death In The Sun

Our latest game here at OHQ was a First Carlist War encounter, a town at the entrance to an important pass was being held by two battalions of untried Carlist volunteers supported by an entrenched gun battery and a group of skirmishers. Support would arrive at the start of a predetermined move, they would need to hold back the Isabelino attackers, comprising of two battalions of British Auxiliary infantry, with the support of a rifle battalion and a Royal Marine rocket troop, also joining them would be three battalions of Spanish infantry supported by a horse artillery battery.
The arrival of the Carlist reinforcements was determined by each of us rolling two D6 the difference in the scores would be the move they arrived on with move six being the maximum, the score came out at five! could they hold out?
Alas no, after some early success in holding up the Isabelinos advance, when their enemy got closer the musketry got worse, turn four saw both Carlist battalions break, reaction scores of three and then two! The objectives for the Isabelinos was to hold the redoubt and the stables for one turn, the reinforcements would be unlikely get there in time to prevent this, so I conceded the game to the government forces ably commanded by Dave.
Photos and narrative follow below...........................................

Bicca, being of noble birth and a relative of Penda Fudd, he is neither but no one stepped forward to refute it, has become the new lord of the local Saxons. It will be several months until he could replace the losses incurred by Penda in his recent victory at Edna's ford, however not wanting Baldinus, last of the Romans, (funny that title, Bicca, had already killed three of those) to think that Saxon power was on the wane has organised a raid to burn the Britons crop, which Penda had failed to do last year. Bicca would show how it is done and gain further prestige in the process.

The object of the game would be for the Saxons to burn four objectives, for one victory point would be the cart, the stack and the rest of the crop waiting to be reaped, while two victory points would be gained by burning the farmhouse for good measure. A further one victory point would be gained for each British unit or noble killed.
To encourage his men Bicca would lead the raid in person accompanied by his champion, despite this the Saxon force morale was only six, perhaps the absence of Baldinus in the British force was the reason that theirs was only six too.
The first British unit, a group of militia, could not enter the table until the Saxons had moved, they would need a five or six on a D6 initially reducing to four, five or six after. After they appeared a British unit would arrive each turn on four to six, with the part of the table edge they arrived on being diced for. This was to simulate Baldinus not expecting any incursions so soon after the death of Penda.

The militia failed to arrive until turn two and in the most disadvantageous entry point, obviously got lost on route, by this time the Saxons were at the farm, there was no way that the Saxons could be stopped from at least fulfilling two objectives. The only recourse was to make them pay dearly, this of course did not happen, giving Bicca his first victory ahead of the new campaigning season.
The rules worked well even with only four units a side, but I think we need to tone down the command figures fighting effectiveness for next time, they had too great an effect on the combat, however it was toned down a little by some dismal dice scores  :~)

Today we had another run out with our Neil Thomas, Ancient and Medieval - Dux Britaniarum rules hybrid for our new year campaign. It was a stand up fight to gain control of the much contested Edna's ford.
The modifications so far served us well and my new multi-basing did not hinder play, actually speeding up movement and cheaper than adding magnets to keep the damn figures in place in the trays.
The game looked to be going in the Saxons favour with the Force Morale of the British going down to one,while the Saxons stood at six. That was until Baldinus with no troops to influence in the fight, joined his hearthguard who were locked in combat with their Saxon counterparts and the Saxon leader, Penda Fudd.
Suddenly Penda was hors-de-combat and the Saxon Force Morale plummeted to two! It was all to late though, the Saxons enraged at the death of their leader wiped out another base of British who upon testing morale lost another base, the resulting Force Morale test saw the British Force Morale reduced to nil, forcing the remaining men to withdraw, so battered were the Saxons that they did not contest the withdrawal and were content to hold the ford and carry away their leaders body.
Some pictures of the action follow below -


We plan to be at Warfare on Sunday so next week we will be having another small game, a raid this time, for even now a new threat to the Britons looms in the form of Bicca se Gebraken, who has been waiting patiently for the opportunity to replace the fearsome Penda Fudd.

The plan this week was to play an Eastern Front game using Battlegroup rules, Dave has been a tad crook, so I thought we would play a small Dark Ages game to try out the new stats for the Saxon warriors, a kind gent on the Lion Rampant FB page shared.
Using the warrior stats last time was a disaster, wild charge and low armour value gave them little chance even with a 3+ attack value.
We will be using the campaign system from Dux Brittaniarum, and Lion Rampant for the fighting, although we will use the random movement and force morale from Dux B and leaders can move between units at greater risk as in our previous games.
Dave was well enough to pop over over so I set up an encounter game, being a clash between two raiding parties.
The revised stats worked better but while we were playing and having to look up things we were forgetting, we both thought why don't we use Neil Thomas rules has we know them well now, the game ground down to a draw, both sides unable to capitalise on each others weakness. This gave us time to mull over a few things we could change to use NT rules instead of Lion Rampant.
I have since made a few tweeks but nothing drastic, I have also incorporated the random dice movement and will also use the Dux B force morale.
I forgot to take any pics of the game, but they would just be like Mexican food the same figures but arranged differently :~)
In the meantime here is Penda Fudd and his bannerman re-based together with his campaign profile, I have decided to multi base the figures for the project, singles were not too bad when planning to use Dux B with six figure units, but twelve is just a pain, I was fed up with them falling off  the movement trays so they are being based for NT rules, but we will only have three bases per unit. 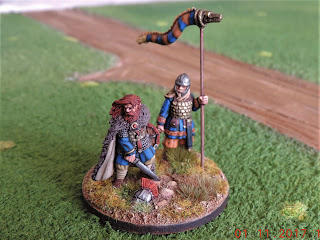 Penda Fudd
Age 21, tall and strong, son of a peasant, simple and thrifty

The next game here will probably be a try out of Neil Thomas rules for the campaign, although games are a hit or miss affair in the run up to Christmas, I hope we will get the next game of Battlegroup in before the year end, which reminds me I must get more paint on Rawnstadt. 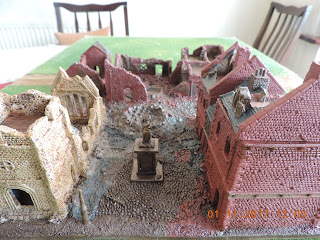 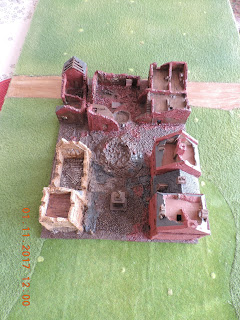 Progress so far, slow, very slow, but sure.