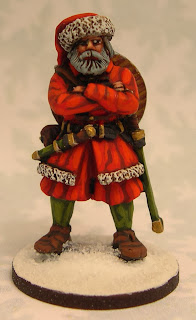 Seasons greetings, no game last week has we made a trip to Foundry for paints and figures. No game this week for obvious reasons but hope to squeeze one in next Monday. In the meantime, 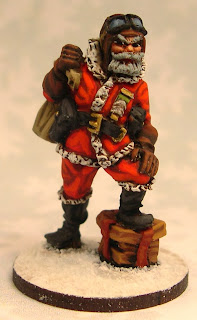 Top Santa a Viking from Foundry, bottom Santa, a Pulp Santa from Northstar. Hence the post title, both Christmas freebies.

Managed to squeeze this little baby in between commission work, a Bergehetzer to repair or recover my little bear baiters. Vehicle is from Milicast, the figures from AB and Foundry and the MDF base from Warbases. 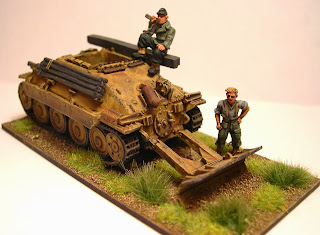 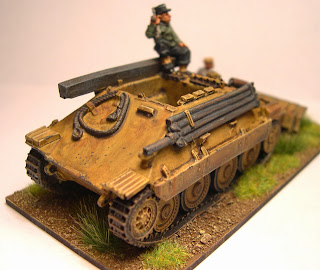 We played a scenario from the "Battlegroup" Fall of the Reich supplement earlier this week, the German force was tasked with holding the Russians at bay for 9 turns.

The Germans had to dice for their initial forces, they managed to get on a healthy amount of units for the task ahead, which was fortunate has no help was forthcoming later. The Russians commenced with just their Recon units on the table and then have to dice each turn to bring on a number of units. The Russian's took first turn, emboldened by seeing the German PAK40 retire due to lack of ammunition they advanced on the right in an attempt to flank the village, meanwhile a T34 platoon advanced on the left flank, to be met by a German foot patrol holed up in the farm and a Hetzer supported by a Tiger II.

After the initial rush there appeared to be a communication breakdown on the Russian side, coupled with the very poor results from firing off the Russian units who received orders, the same could not be said of the Germans whose fire was both accurate and deadly, indeed the only real Russian success was in keeping the German Tiger II pinned for a while by shots bouncing off its armour. Hopes on the Russian side were raised when the German Hetzer had to retire due to running out of ammunition, this was short lived when another emerged from the village. With the Russian force remaining also running out of ammunition it was clear that they would be unable to brush aside the opposing Germans in time to stop their main force escaping, so the Russian commander called off the attack to await further support.

A cracking little game, one of those times where the dice gods totally deserted the Russians and totally favoured the Germans, a case of chalk and cheese.﻿
Posted by Phil Robinson at 15:43 1 comment: