In glorious 28mm this time, having bought the winter mat,  shortly before Christmas I ordered more Volksgrenadiers armed with rifles from Empress Miniatures. Main reason being I needed more figures with rifles and I also wanted to add some figures with a bit of white camouflage to the collection.

These arrived on Christmas Eve, well done Empress and the Post Office I immediately set to and got them primed and based ready to paint over the Christmas break. I also ordered some more British figures which I shall get painted after I have finished the last six figures for the fourth Paraguayan batallion for my Triple Alliance project. 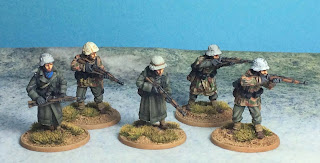 The figures at the front of the photo below have had their heads swapped for a bit of variety and the one at the rear has a Panzerfaust from the Warlord grenadier sprue added. 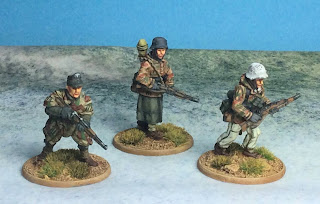 All being well I will off over to GHQ on Tuesday for some ACW action.