Game Balance, now there is a thing, I don't mean that both sides should have an equal chance to win no, but on the other hand no one wants a game where your opponent or yourself have no chance of winning at all. Tricky, more so in the Great War where at some point you will be up against an enemy in trenches with probably well placed fire power and you have to attack with most likely than not, little cover and barbed wire obstacles to boot.
In this scenario I attempted to "even" things by giving the British attackers more points and included a tank to aid the infantry attack, I also included plenty of shell holes in no-man's land to give some available cover, the attack would also be a dawn attack making them less visible early on. To temper this advantage in the first turn the British units had to pass an order test to move on table, this was to reflect units going astray in the gloom, in Bolt Action after turn two you dice to see if the light is up this can also help the defender, an early result of it doing so could mean that the British were a bit tardy in the advance. The Germans although having some trenches and buildings have to defend across the front initially at least and are unable to bring all their fire power to bear from the buildings. Despite coming second I think it worked anyway.
Of course nothing can cover occasions like below, an example of German fire dice! 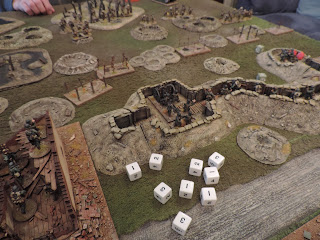 Enough food for thought on with the pretty pics and narrative......
Turn One. Dave got all but the Whippet and a Lewis Gun section to move on table, the Germans could see nothing at this distance.
Turn Two.  The Germans managed to spot and get a shot in while the British advance continued, not a lot happening this turn.
Turn Three. The sun was up all was clear, the attack began in earnest, at this stage Dave was having to move and fire so the Germans got off lightly, as you can see by my firing dice result above so did the British :~)
Turn Four.  The Germans began to take a beating, especially the MG and field gun, the sections in the buildings having no real targets of opportunity, having seen that the British attack was concentrating on the right I should really have moved the section in the far building earlier, something I would regret later.
Turn Five. Things were looking grim for the Germans, the only real success was eliminating the mortar spotters so at least the off mortar could not change targets. Although by then the damage was done, combined with concentrated rifle grenade and lewis gun fire both the field gun and the MG08 were eliminated and the section in the trench was taking pins, making them virtually ineffective.
Turn Six.  The section from the far building was stuck in the road, it could run and gain the trench or advance and fire, either way the amount of British fire against it meant it was doomed really. They opted to fire hoping to inflict some casualties to lessen the opposition for the counter attack by its comrades. We threw for an extra turn and got one, so I had another chance to inflict more casualties but so did the British and with more fire power to do it. The game was lost though, the German CO bugged out and the section in the other building surrendered. The scene is set for the German counter attack.
An enjoyable game, Dave played the British well, although the dice were unkind I should have played a lot better than I did. Balanced? I would like to think so, as much as one can anyway. 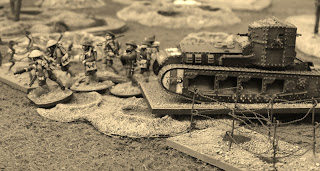 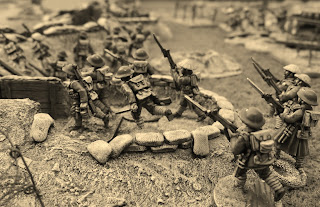 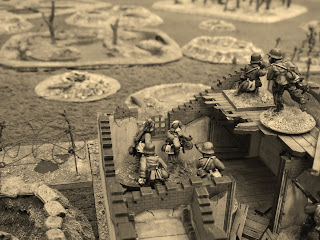 Off to GHQ next week for a foray in the Indian Mutiny, Gad Sir the heat!

TTFN
Posted by Phil Robinson at 08:45