Real life reared its ugly head on Monday and curtailed the planned Great War game, however as I had already set up the table it seemed rude not to play a game. We had already decided to use Bolt Action rules, we had both had long weekends so wanted something we were quite familiar with, not having played Through The Mud And The Blood for a while. Either rules would work solo, but I decided to stick with Bolt Action, although I enjoy games with them I still feel they lack something, not being constrained by time I could sit back and digest the game more playing solo . 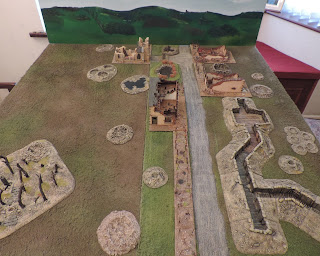 I randomised where along the base line the German units would enter, the stormtroop sections and teams would enter first with the follow up troops entering on turn two, again their entry points being randomised. In hindsight I should also have, for the storm units anyway, randomised how far the units would start in from the baseline rather than the edge, starting at the edge gave the German forces a lot to do. 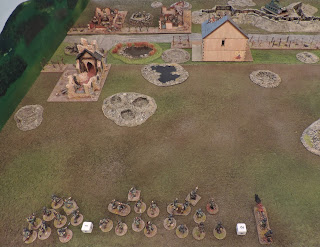 The Germans had a preliminary bombardment. this put pins on all the British units, however these effects were partly negated by the the first four order dice out being British, rallying is so much easier in second edition, to easy I think, this enabled them to rally all the pins on four units before the Germans moved on from the base line. There was no firing in the first turn, in turn two the British came out with the first two dice, firing on the approaching Germans but not doing to much damage at the range fired at, in turn three the Germans only managed one hit, but it did knock out one of the Lewis guns. Elation was short lived the British SOS bombardment arrived, smack bang in the middle of the advancing German units, this really stooped the German attack in its tracks causing maximum pins on all the units in the blast radius. 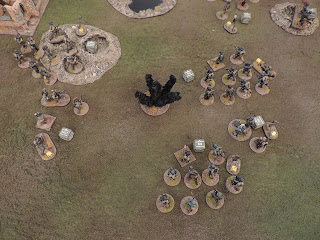 In turn four the German flamethrower team managed to avoid the carnage and make it to the British wire, only to find the wire uncut, so had to seek refuge in the nearby building. Here they were subsequently close assaulted by the British bombing team, the British had seven dice causing no hits, it was looking good, but no the Germans caused none either, next round was two - one to the British, goodbye flammenwerfer.
Due to the pins inflicted by the SOS stonk there was little German advance in turn five, by turn six they had only made it half way to the British line, there was a turn seven, which I played out although after turn five it was obvious the attack had stalled, so a win for the British and Dave in absentia.
I have been on and off tinkering with a Bolt Action, Battlegroup, CoC up for our Spanish Civil War games, I hope to try these out next Monday if Dave is willing. Based on my observations of the solo game I may well try them out for the Great War too.
More pics of the action below.............................................

TTFN
Posted by Phil Robinson at 12:36