The Soviet advance on Bikkelheim continued at OHQ today, General Bikkliski has sent a force in an attempt to flank the German positions, the position is lightly held but the low lying land makes the area very boggy, recent rains have not helped and the surrounding ploughed fields are now also in a decidedly soggy condition. Time however is not on the Generals side so the attack must go ahead regardless. 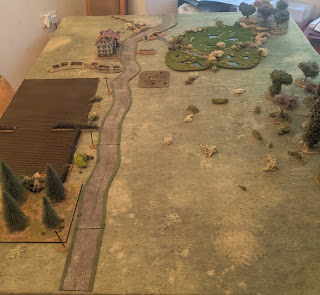 The Germans have dug in on the slightly raised ground at Bikkelheim Farm, a further squad and the platoon HQ have taken up position in the farmhouse across from the house is a dug in PAK40. A 75mm infantry gun is in position in the wood on the flank to hopefully counter any Soviet probe on that flank, a light reconnaissance tank meanwhile takes cover behind the building. The support platoons third squad and a Jagdpanzer IV will be coming up in support with the further support of an off table 120mm mortar battery. Its Battle Rating is 16. 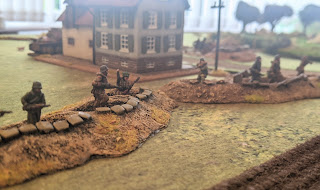 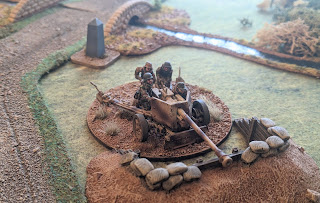 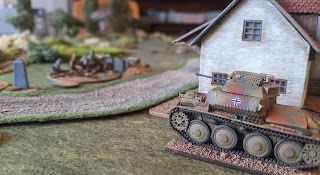 The attacking Soviet force consists of an infantry platoon supported by a Zis3 anti-tank gun, a scout T70, a SU57 halftrack and three T34/85's with an off table 120mm mortar battery. Its Battle Rating is 18.

The initial Soviet assault is halted in its tracks by a 120mm mortar stonk, the lead T34s crew being so rattled that they abandoned it.

On the Soviet right flank the T70 makes a demonstration, distracting the PAK40 it is however pinned by HE fire from the German infantry gun. 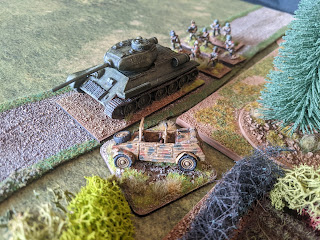 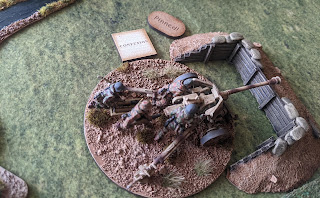 Whilst unpinning the T70 Dave pulls a confusion counter which he puts on the PAK40 with the required morale test causing it to become pinned, the CO is obviously wanting to know why it is targeting the T70 when T34s are bearing down on the position. 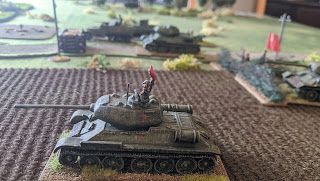 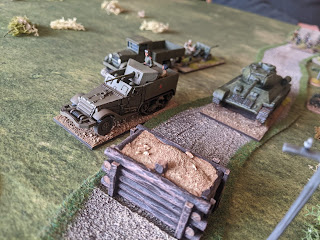 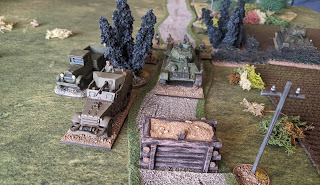 However the radio op gets through and another devastating mortar strike brings the Soviet force close to exceeding its Battle Rating. 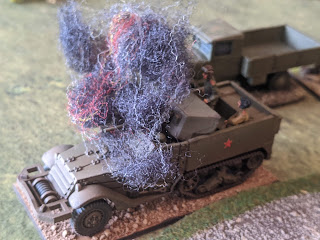 A shot from the PAK40 takes out the SU57 the resulting chit draw takes the Soviets over their Battle Rating and the attack is called off. Time has been gained to strengthen the defences of Bikkelheim for the assault that will inevitably come.
TTFN and KBO