For our game here today Dave requested a WWII game using my 28mm late war collection as due to Covid and various lockdowns he had not had the opportunity to command them, again as he had not played any games using Bolt Action rules for the same reasons he chose that rule set for the game.

Folk will no doubt by now know my opinion on Bolt Actions gimmick rules to appease list builders and sell models, so don't expect things like the ridiculous Tiger Fear rule.

Below is a list of my house rules for the game though, with the added Target Acquisition rule.

Target Acquisition - I will be using the spotting table from Battlegroup and if the target is not acquired the target will receive a pin if hit and if any sixes are rolled one will be re-rolled the usual roll to convert the hit to a casualty will apply.

Morale - When testing for fifty percent casualties form shooting and the unit fails its test instead of the unit breaking it will immediately move 12" towards friendly cover or the friendly table edge if no cover is within reach, it will then be given a down order dice or the order dice changed to down if it already has one.

Mark it as shaken with a suitable marker, its next order must be a rally order, the units morale value will be reduced by one for the test, if it successfully rallies remove the shaken marker but not any pins it may have.Close Quarters - If you lose a close combat by twice as many casualties than your opponent then remove the complete unit as per the rules, if you lose by less than twice as many then retire as above. 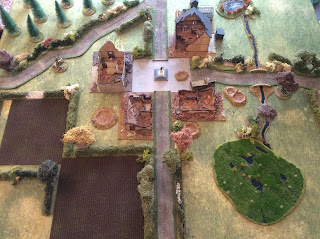 The game will be a straight forward encounter battle, both sides converging on the hamlet of Petit Rawnslie which yet again has been ravaged by war. 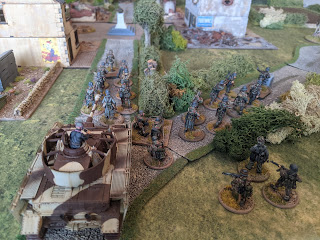 The German advance begins well with units stealing a march on the approaching British. 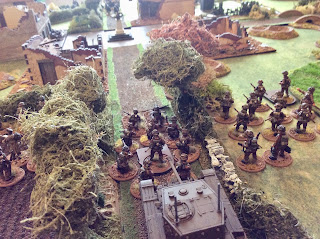 Inertia then struck the German advance allowing the British to make up ground on the hamlet. 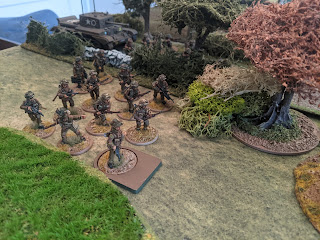 Just when the Germans broke from their lethargy disaster struck, a lucky shot from the advancing British Cromwell brewed up the German Panzer IV before it got off a shot. 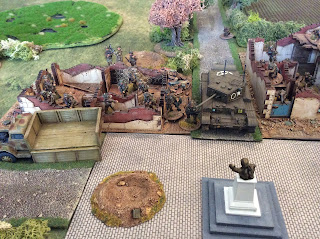 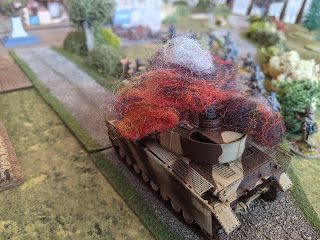 Again the German advance stalled with the PzIV blocking the road giving time for the British to occupy the remaining three buildings giving them a commanding fire base. 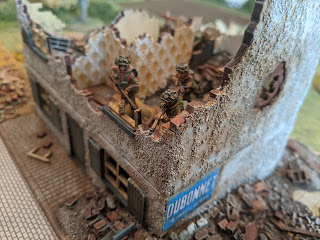 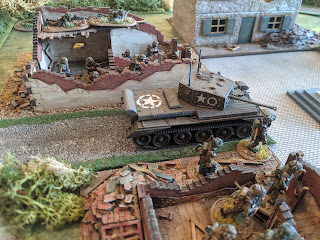 The British had also set up a Vickers MG on the German flank forcing them off the road and into cover meanwhile the building occupied by the Germans came under converged fire from two British squads and the unopposed Cromwell. 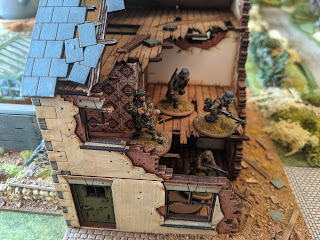 The German squad behind the adjacent hedge got similar treatment both squads becoming pinned down. 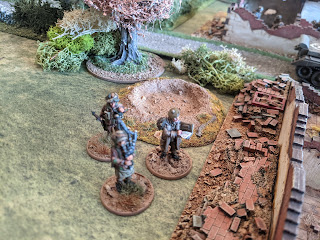 Lieutenant Bikkleigh peruses the rules for the effect of a PIAT against troops in buildings. 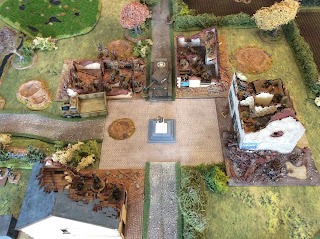 By turn four it was all up for the Germans with not enough men to oust the British from the hamlet, even if they could be motivated to do so, which was doubtful.
That's all for now folks, keep safe and keep gaming.
TTFN