Dave came over today for the last game in our mini campaign using Battlegroup, Fall Of The Reich, the assault on Rahnstadt itself. Due to their run of success in the previous games the Russians would get an extra 50 points of troops to choose, despite this the Germans had a slight edge in their Battle Rating, 25 v 28 respectively. Game on...………………….. 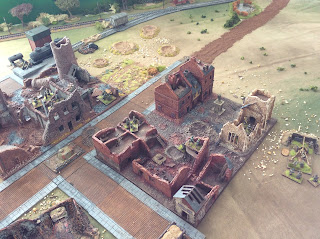 The bombardment was thankfully short, our men held up well despite their inexperience, we can only hope their courage holds up once the Red tide descends on us. We can see troops advancing on our left attempting to flank the town, we are weak here, reinforcements are on the way we are informed, we must hope this is a diversionary attack and hold that flank as best we can.
Two T34s are heading our way in the centre, our right being protected by the Hazell Marshes, our Pak40 gives fire to no avail, but wait! We hear an approaching aircraft, it is one of ours! Its cannon roar and one of the Red tanks goes up in flames. 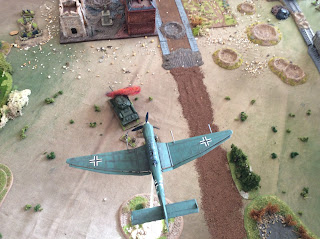 Our joy is short lived another T34 appears supported by a JSII, we trust that the fly boys stick around for another strafe, meanwhile our dug in Panther takes a long shot at the JSII with no luck, wait it has stopped, we see smoke billowing from the engine (drew a breakdown chit) the crew are abandoning it, hurrah! Then we hear the noise we all dread, Katyushka rockets, our men get off lightly but our Panther is destroyed, while our Pak40 crew have gone to ground, we rely on the Luftwaffe for our anti tank capability as our Panzerfausts are not yet in range. 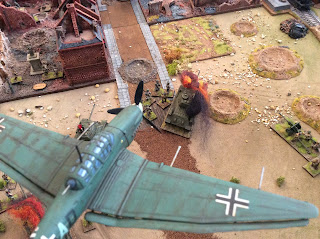 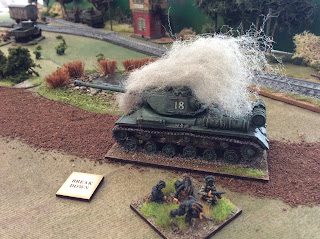 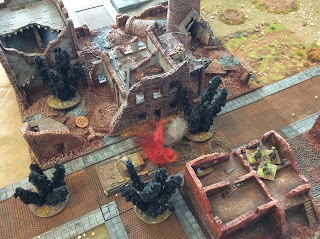 The Stuka comes in for another run and takes out another T34, but the supporting infantry are now advancing on the town and the Russian flank attack is making ground and the Red mortars are now raining down shells, we are becoming hard pressed, where is our Hetzer battery we could really do with them arriving. Another run by the Stuka halts the remaining T34 to buy us more time, we are thankful that the Luftwaffe still have some bite and the first of the Hetzers arrive, there is hope yet. Our 105s rain down more shells, the Reds lose heart and are beginning to fall back, Rahnstadt is safe for now, we may have won this battle but the end for us is still in sight I fear. 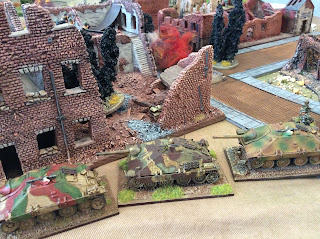 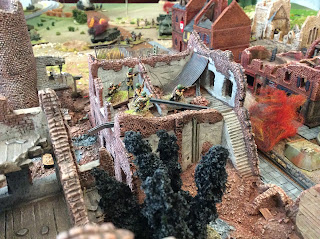 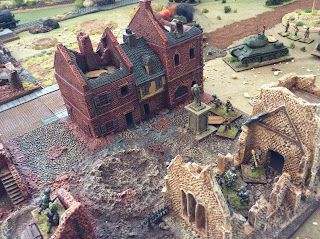 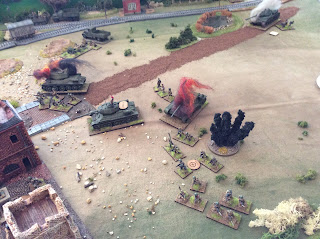 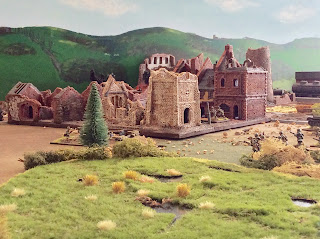 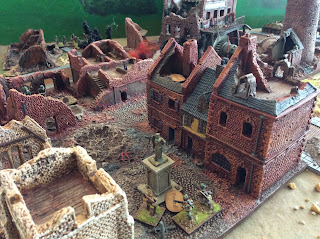 Another spiffing game, Dave's Russians had drawn some dire chits and could not afford to unpin the remaining T34, the loss of an infantry unit from the 105 strike finally tipped him over his Battle Rating total.
Despite getting double victory points for the win earlier campaign victories saw the Russians win the campaign by just one victory point.