Still Serving On The Eastern Front

Yet another WWII game using "Battlegroup Kursk" based on the Narwa scenario in the Rapid Fire 3rd supplement. 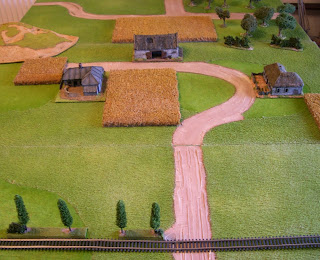 The Soviet objective is the road junction to the rear of the large wheat field behind the barn, the Germans will have to take morale chits for the loss of each farm building, each of which has been fortified and provides hard cover, any German squad occupying these at the start of the game can begin on ambush fire orders. The poplars lining the railway denote an embankment which slopes down to the road, the Soviet tanks can only cross at this point, the embankment is a obstacle to infantry. Any Soviets within 6" of the embankment cannot be seen by any German observers on the hill to the left, German FO can be begin the game dug in here, the Soviet FO and ATG can begin the game dug in on top of the embankment. The road to the farm buildings is rural and does not give any movement benefits. The forest is marshy and counts as difficult terrain.

The Soviet T34 platoon advances, supported by infantry and an SU122. A 45mm ATG and FO are dug in on the embankment, whilst the 82mm mortar battery deploys in cover of the embankment.
German forces await the Soviet onslaught, infantry are deployed in the buildings, a tripod mounted MG42 on the edge of the woods, FHQ is on the hill dug in with FO team.

Turn Two
The Soviets continue their advance on the occupied buildings, fire from the Tiger deployed on the Soviet objective point gives fire to no effect, something it was going to repeat until turn 5! The Stug's is unable to acquire its target in the meantime, the Soviets timed 122mm barrage hits the barn only managing to pin the Stug.

Turn Three
The Soviets only manage to get four orders which limits their options, although the fire from the off table Katyhuskas cause several infantry casualties along the large field but has no effect on the Tiger stationed there. Meanwhile another Tiger enters the fray, and a nebelwerfer stonk has a negligible effect on the Soviets.

Turn Four
More happening this turn, German 150mm timed barrage arrives, targeting the road just in front of the barn, unfortunately the Soviets not having advanced as far as expected are spared much damage, in fact the Germans were in more danger! The Stug is taken out by the T34 in the wheat field which in turn is taken out by the recently arrived Tiger. The other Tiger again appears to have a myopic crew.

Turn Five
Continued Soviet fire against the Germans in the buildings was starting to take effect, the left hand buildings occupants were all taken out and the MG team in the adjacent field reduced to two men. Meanwhile in the other building under fire from infantry, the SU76 and the SU122 the infantry their retired to the wood. The German tiger that had hit nowt now took out the remaining Soviet T34, things were looking grim for the Soviets.

Turn Six
Unknown to the Soviets the German battle rating was near to its limit, the loss of one of the buildings and another infantry team was enough to take them over, so although the Soviets had yet to take their objective the German force with just the two Tigers, four infantry and HQ remaining together with the half track mounted 20mmQuad quit the field to the Soviets.

A selection of shots from the game 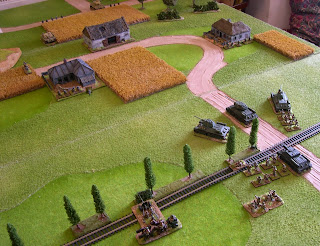 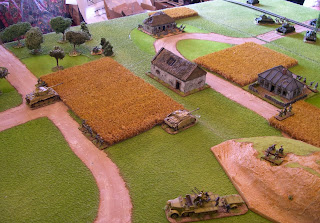 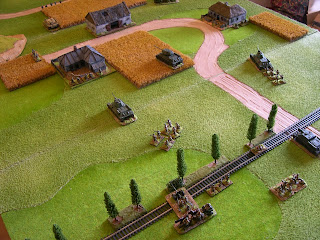 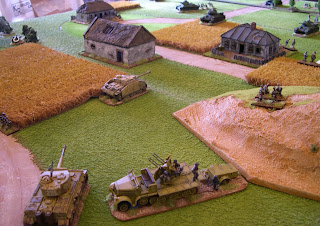 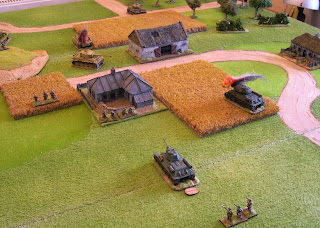 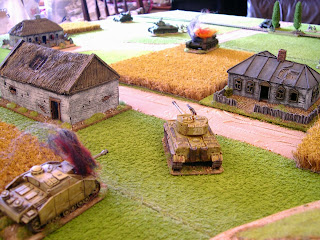 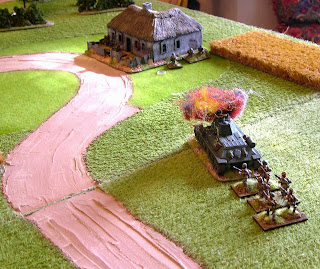 An hard fought game that could have gone either way at various points, Comrade Bykkliski continues his run of victories, the Gulag as yet to beckon it seems.

TTFN
Posted by Phil Robinson at 11:06