My Partizan 2016 Part The First

Well its a YES from me, bloody brilliant. Dave, Kevin and myself turned up at 10.30ish, after a slight diversion, to busy talking to see the show ground sign, though I must admit it does not exactly stand out.
Now usually at this time we breeze in to Kelham, but behold there was a queue! and I hate queueing, in this case I make an exception because any fears that numbers may drop with the change of venue was certainly allayed, I hope that this is confirmed by the attendance numbers. Having said that we were in within 10 minutes or so, I am sure that Richard and Laurence will address this for next time. Some folk have said that the venue lacked atmosphere I don't agree, I thought the place buzzed and did not drop off at lunchtime and a big plus for me being in one lace I think I got to speak to most people where at Kelham I invariably missed folk. Anyway finish with the rambling and onto the pictures etc.
My first port of call was Simon Millar's (clicky) and Phil Hendry's (clicky) Battle of Circesium game, I had failed to say hello to Simon at the previous shows, I have mentioned in previous posts that Simon and Phil had both been instrumental in me kick starting the 3rd century Roman project. Introduction over Simon invited me to join in with a game, at first I said I would just watch a while, on reflection you do not really get a grasp of a rule set by just watching and its not everyday you get a chance to play with Phil's splendidly painted Romans and Sassanids so when Simon asked if I was sure I did not want to play, I joined in. I took command of the Sassanid force "protecting" the town, after an initial good start things went downhill, losing all my elephants contributed to an emphatic Roman win. A splendid game, enjoyed it so much I bought the rules, which I had been procrastinating over since Simon published them. 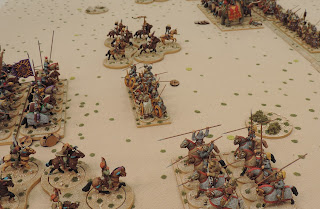