A Bit Of Colour

Lots of khaki and grey recently so I thought a touch of colour would not go amiss, first off a Dutch general for the War Of The Spanish Succession. Got some samples from Ebor Miniatures, when I thought that I may revisit the period, with the release of French dragoons, more splendid work from Paul Hicks, and the preview of cuirassiers it may still happen.

Next some Front Rank figures for a commission I am doing, James II's Horse Guards trumpeter and a general from the same period.

More colour tomorrow, I am off to GHQ for a Seven Years War game

Battlegroup, Fall Of The Reich Campaign - Game One

Today Dave and I fought the first engagement of our campaign, Rawnstadt has been declared a "Festung" by Mr. Hitler. The Russians do not want to use resources to surround and neutralise it, but they cannot ignore it and risk it being a springboard for an attack against their flank or rear, so the "Boss" has ordered it taken or wiped out, always keen to foster a little rivalry, General Bikkliski has been ordered to attack from the east, whilst General Robinski has been ordered to attack from the south, to the victor the spoils?
Keen to steal a march on his rival, Bikkliski has pressed on without waiting for the supply column to catch up, so his tanks will be unable to re-arm but there should be enough fuel .
The Germans have set up a defence line along a ridge and adjacent to Nordheim farm, they have an infantry platoon together with anti-aircraft support and are also supported by 82 and 120mm mortars off table and in addition to a timed 105mm howitzer strike can expect further support from a Panther and Pak40. 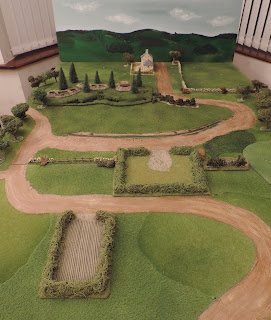 The table, using the Battlegroup Defence Line scenario, the Russians will enter from the bottom. 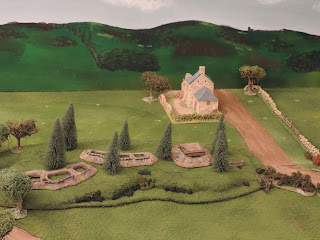 Nordheim Farm and ridge.
The Russians sent a motorised scout squad and half a motorised infantry platoon racing ahead, leaving the T34 platoon and IS2 support to follow up with the other half of the infantry platoon, these would start to arrive on turn three. This was a bit of a gamble with the infantry unsupported they were at the mercy of the German firepower, the timed Katyuska strike pinned the FHQ in the command bunker which gave them a little respite as no mortar fire came down, then the tanks arrived, one was taken out by a panzerfaust which gave the few remaining German infantry on the ridge heart but that was tempered when the Russians pulled a breakdown counter which immobilised the truck mounted 20mm quad which was unable to move up and lend fire support, it had already done good work by driving off an IL2 air strike earlier though. Turn four was dreadful for the Germans they failed to hit most targets and the radio communications failed too. The final nail in the Germans coffin came when Dave pulled his third air attack counter (perhaps it would have been better if I missed everything), third time lucky, the VVS arrived in the form of a PE2, the quad failed to drive this attack off, although it only resulted in a couple of pinning hits which were saved, the resultant draw of a counter for the air attack took the Germans above their BR of 27.
Although the counters drawn were 10 to the Germans and 11 to the Russians you can see from the photo below why the Russians were nowhere near their BR of 33.
Some photos in no particular order - 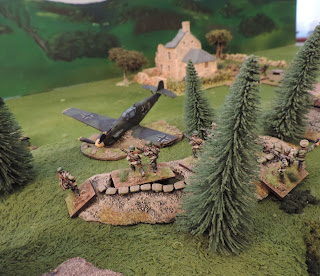 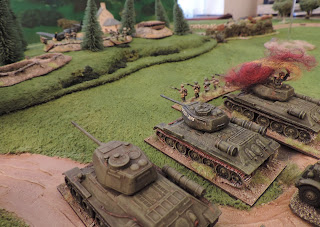 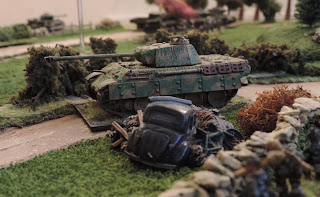 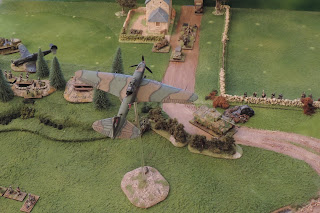 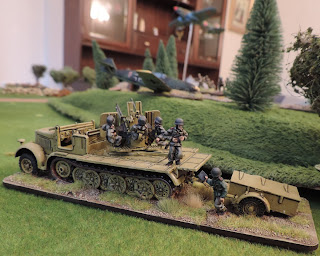 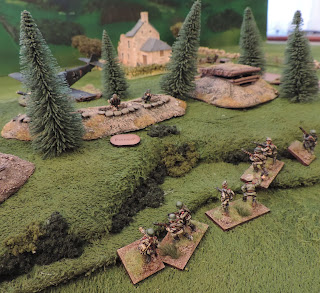 I am sure I have missed some salient points but in the heat of battle one forgets what, when and where at times. A victory for the Russians earning three victory points, next time the action will revert to the south where General Robinski will launch his offensive, this will see me command the Russians for a change.

Whilst trying to find something last week I came across a crashed German plane I had started, when I cannot remember, long enough ago to mislay the decals for it anyway. I think it was for a display game that did not materialise at some point, though I could be wrong, I thought that it would be ideal for an objective marker in our Battlegroup games. Without further ado I set to and painted it, the decals I stole off another kit I have yet to make, as it will be for the Nationalists in the Spanish Civil War I do not need the Luftwaffe ones. 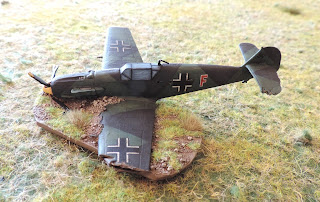 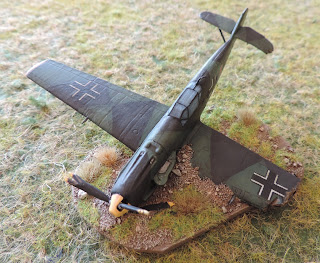 I am also getting towards the end of re-basing my 20mm WWII collection, sprucing them up a tad along the way, on the list was a command base, on it was a Kubelwagen, I don't know the manufacturer as I got it way back in the late 1990's. It as always bugged me because I was never able to fit it together with any degree of squareness, it always looked like an insurance write off, ideal I thought for a crashed one as another objective marker. 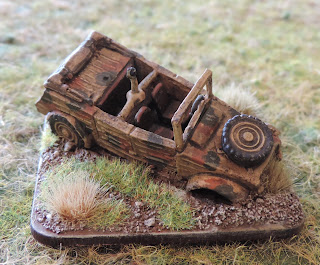 We made the trip over to Nottingham the weekend to attend the new show Red On Blue In Nottingham AKA ROBIN, my sole purchase was this livestock pen from Warbases, I could not leave with nothing now could I? If Shell Hole Scenics had not been a no show I had planned to invest in some WWII Hungarians if I liked them, I could not really tell from the web site pics, coupled with the fact that there are no photos for most of the range (who says shows are no longer necessary), oh well it may have saved me a bob or two as the urge as gone now. 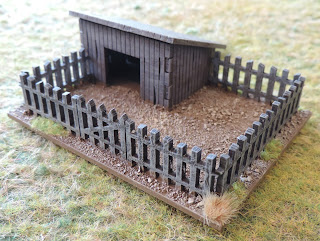 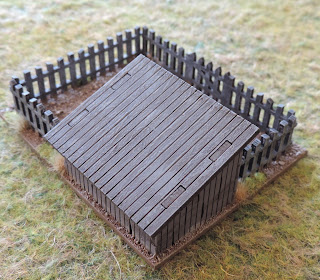 I think this will be ideal as a cow shed in 20mm games and a pig pen in 28mm games, could be an objective marker too of course.

Check out Tales From Rhanzlistan for details of Monday's game over at GHQ, and also True To The East to see the victorious Comrade Robinski.

Next game is here at OHQ on Monday when we will start our Battlegroup  Fall Of The Reich campaign proper. 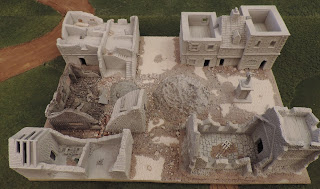 The buildings are a mix of Hovels 15mm and 20mm with the exception of the building with the old paint showing through, this was made by Matt Bickley for our games when we were on the show circuit, the cobbles are Wills, the shell craters are from Ironclad and the monument is from Sgts. Mess who also provided various bits of debris. 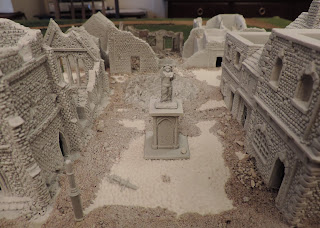 Below is a picture of it with the recently Christened Rawnstadt metal factory piece I made a while ago, the road pieces are from Ironclad Miniatures. 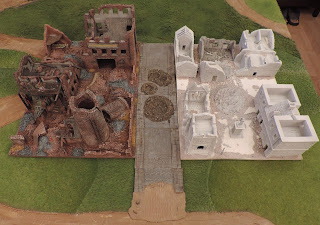 Although it has appeared in game shots before, here are some close ups with the added name board. 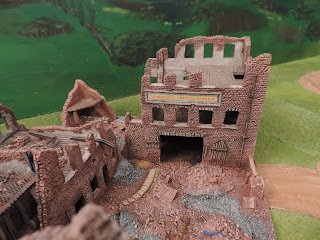 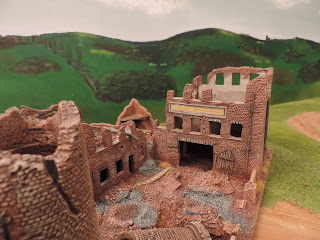 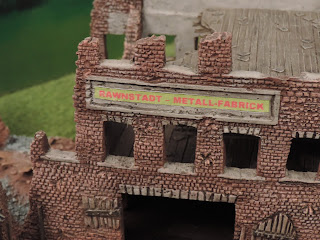 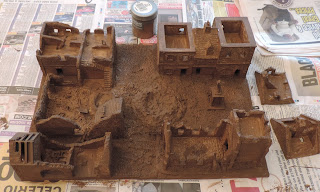 Off to the new show ROBIN in Nottingham with Dave on Sunday, delivering some painting and having a mooch round, I have no list at the moment though ;~)

For today's Spanish Civil War affray I used a Bolt Action/Battlegroup/Chain of Command rules mash up. The main working bits are Battlegroup, the game used Bolt Action order dice and I worked out a Force Morale from Chain of Command and used a modified bad things happen morale reduction chart. I decided not to add any SCW peculiarities for this game, with the exception that if the anarchists were given a "snap to it" order dice and wanted to move they would have to take an experience test, should we decide to give the creation another go I will start to add things then.
The scenario is a slightly modified one from the Battlegroup rule book. 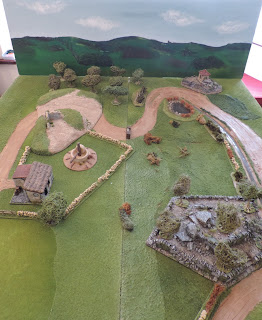 Dave elected to bring units on from the bottom right hand corner in the photo, we diced to see how units could be deployed on the table for turn one, the Republicans, Dave, got 2, whilst the Nationalists, me, got three. These could be deployed ten inches from the diagonal centre line, running from the top left to the bottom right in the photo. One objective was placed in the road, in the board centre and a further one each could be placed by each player.
Turn one saw both sides moving their on table units into firing positions and in the Republican case one on ambush fire, duly shooting up one of the Carlist militia squads on their way to man the wall opposite the olive press, this resulted in pinning them, so they would have to rally next turn.
Turn two, both sides diced for their reserves, Republication four and, wait for it Nationalists, one! I bought on the other Carlist  squad who rushed to support their comrades who were now coming under intense fire from the Republican forces, if they could just hold on until La Legion arrived. Alas things were looking grim, the other squad was pinned and another destroyed.
Turn three, maybe things would improve for the Nationalists, dicing for reserves, yes you guessed, another roll of one, while the Republic rolled a six enabling them to bring on their remaining men. Not to worry I bought on the Legion Panzer I and put it in position to stop the Republican forces gaining the central objective, the Republications bought up their 45mm anti-tank gun to counter the Panzer I threat, whose order dice would come out first in turn four? In the meantime another Carlist squad was destroyed, further reducing the Nationalist force morale.The remaining Carlist squad moved to fill the void but failed to spot the approaching Republicans, who in their turn were able to fire on them, they not being so myopic fired causing casualties, incensed by the demise of their comrades the Carlist squad held firm, the platoon commander not been made of such stern stuff took refuge in the building.
Turn four at last the Nationalists got three units on, but it was a case of too little too late, the first order dice belonged to the Republicans who duly took out the Panzer I, on the other side with no support the other Carlist squad was lost to a man. the platoon commander with two Republican units close enough to fire pin and close assault him took to his heels hoping the cover of the walls and building would be enough to obscure him from Republican fire.
Turn five, all was up for the Nationalist cause, the Republic took the central objective, with no hope of getting it back this turn another roll on the chart reduced their force morale to one. The Carlist platoon leader did not quite have enough movement to get out of line of sight and was spotted and took down, another throw for the Nationalist force morale took them down to zero, addios Pedro.

All in all the various bits of the rules meshed well, I cannot see that they added much to the game either way though, I think it could have been played equally as well with Bolt Action as is, in fact with the small squad modifications we use the small Carlist squads would not have been so brittle. Something to mull over for next time anyway.